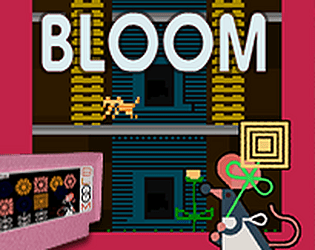 Version 1.03 is now available that addresses the detailed issues below.

This game surprised me. It seemed a bit disjointed at first with a lot of different things going on, but once it got going I really enjoyed some of the mechanics. It's a simple premise that's well-executed, and it feels like playing an old forgotten classic from some obscure console.

The arcade/NES/Atari display options are very cool. I also really like the sound design: music and SFX are excellent, and the pitch increase on footsteps as you climb up higher is a nice touch.

I found a few bugs / issues, most of which should be pretty easy to fix (a couple were mentioned by fricochet already):

1. It's possible to cheat by walking flowers to the left side of the screen at ground level (without climbing the ladders).

2. You can't bite the boxes while holding a flower, so it's possible to get stuck behind a stack on the ground and not be able to move. I would recommend allowing the player to bite while holding flowers, or maybe add a jump ability to get over the boxes.

3. After you get a game over, restarting the game does not reset the score or lives. You start again at level 1 with the previous score and 0 lives. Closing and re-opening the game appears to be the only way to reset it properly.

4. When you get a high score, 2 entries are added with the same number to the scoreboard (one with the initials the player entered, and another with initials "ABC").

5. I feel like the TNT hitbox lasts a bit too long. I died a few times walking into the TNT zone after I thought the explosion was over. Maybe use a longer sound effect if you want it to be lethal for several seconds.

Like I said, nothing extreme here and hopefully they can be fixed easily. Great job!

Great to know you liked it and also the comments.

I'll do my best to address them for you.

1. Yep. its not a cheat. you can walk left to 'take' the flowers to the shop

2.  agreed, I'll see about doing something there

5. agreed fix being worked on

Really pleased you like the sound design. It is a custom 8bit chip-sound emulator of kinds. The base waveforms are generated as needed and then sculpted in realtime, so there are no actual sound files. Here's a shot of the dev tool for designing the sounds: 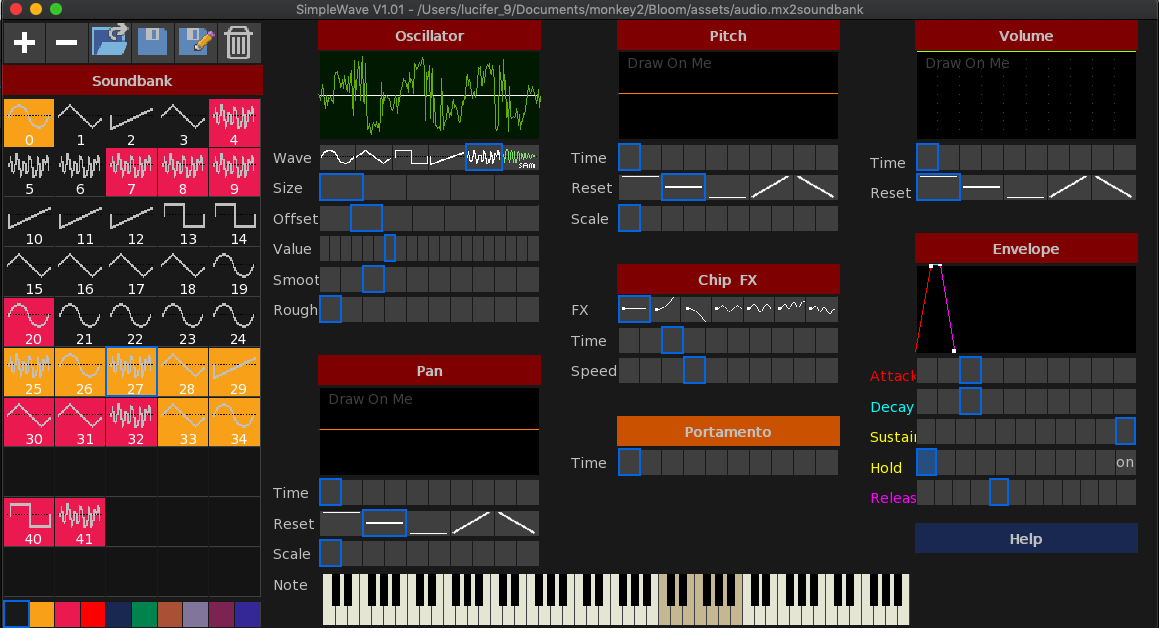 There is also a custom song editor that eats the created chip-sounds, to make the tunes.

A great little retro game! Being able to choose between different versions of the game is a nice touch and all three versions seem pretty authentic. Fitting soundtrack and cute characters.

There might be a bug with the scores. When I broke the high score for the first time, it added my score twice to the top of the list, so that there was a first place with my initials and a second place with the same score and the default ABC name. The score was 5220, so that wasn't one of the default high scores. Also, my score wasn't reset to zero on my second try, instead I started with 5220 points and only one life. I switched from Arcade to 2600, maybe that helps identifying the bug.

But then again, games for those type of consoles almost always had bugs, so...maybe that's more of a feature? ;)

I'll get onto it and see what those bugs are up to. Thanks for checking out the game and having a good time with it. Always good to have feedback :) I'll keep you posted...

Neat concept, challenging game! I included it in my A Game By It’s Cover 2018 compilation video series, if you’d like to take a look. :)

Thanks for the review Jupiter :)