Three macabre mysteries of the North
Submitted by Nova Kane LLC — 2 days, 13 hours before the deadline
Add to collection 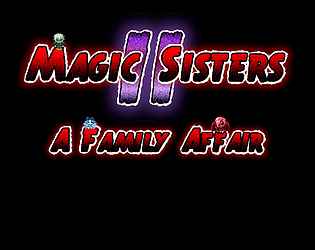 I am having some trouble with Bubbles flying away from the dragon. No matter what I do, I keep getting burned. I can never move fast enough to miss the first flame and I can only occasionally miss the second one if I move down, but once the dragon goes down, I can't miss it. It appears the up and down arrows are the only keys I can use to dodge?

You want to move before the dragon gets to you.  So if you see him moving down, go all the way up and vice versa. Definitely don't wait for the flames.

I do try to move. It's just the dragon seems to shoot flames the instant I hit space to start the minigame. Good to know I'm not missing any controls. I'll give it another try.

I managed to get through the minigame! I did have a glitch afterwards in that the screen stayed red tinted, though I was able to finish the game and get Twitch into the coven.

Sweet!!! Thanks for giving it another try. Sounds like you liked the game and I'm glad.

Just beat the Blaze path (I thought there would be more fighting) and it's definitely quite an impressive three path game you made here. The mysteries were not too tough, but the triggers could have used a little bit of work. For example I tried to leave the vampire castle and Blaze said I had to talk to the vampires, which I already had. I had to talk to my fairy friend to trigger the exit.  I also had to talk to both the vampires in the castle, even though the one I spoke to had already given me the information I wanted.

Little things like that make a game of this type more confusing, as one doesn't know when they missed some arbitrary trigger, or if they are missing a real clue. Still, it didn't take too long to figure these things out, and roasting the guilty parties was pretty fun at the end. Wish I had time for the other two paths!

Thanks for playing. Making a mystery is a fine line between not giving away the clues and not making it too hard. I think this one is pretty close.

Nova. We know each other already!

Time to review your game!

It’s really risky to make three games instead of one, but I like you can play even one of them and having a general idea of the rest and also make people have more content if they want.

I already told you how some parts were more cryptic than normal.

Since you fixed some parts of the game, I might eventually return to it (maybe waiting for Magic Sisters III, who knows).

The atmosphere is good, even if I found the game was too much dark in some points, but it’s a personal nitpick.

The dialogues are well done, and you can say who is who by only reading.

Puzzles were clever and immersive to the context and most of the time you know what to do in a natural way.

I like how you put many descriptions everywhere for increasing the “detective” in us and the details of the world you created.

I appreciate your efforts for making this game, it surely was hard considering all the events and making three stories with a sense. Congratulations!

When you say dark, do you mean light wise or story wise?

Light wise! But again, I have to see again the game, I sure you fixed the problem already!

nice game, it makes fun to explore everything. great music, too!

Thank you, I'm glad you had fun.

are there fights? i played it over one hour without having fights.

No fights. it's a mystery game.

no fights are ok. in my game arent fights, too

This is a pretty good mystery adventure, I beat the Bubbles route from beta testing but only got partially through Blaze. Coincidentally this game also shows me how a game plays if every object is interactable which I had been wondering about. It's easy to get lost due to the way the map design is non-linear.

This is a really good game, and I kind of like the interactions between all of the races. The one thing I think this needs is some direction. I've played all three stories but I can't finish any of them; the game froze twice for Tara when I went to talk to the count of the vampires a second time (she froze on a wine bottle on the floor), and I can't appear to do anything more with Bubbles or Blaze after speaking to the magician and handing him something. I've spoken to all of the npcs multiple times and I've taken/given everything I can, but there's no actual clue as to what to do to advance the plot after a certain point. I'd love to finish any of the three, but I'm having trouble because nothing will happen no matter who I speak to, and I feel like there's so much more I'm not able to get to.

Sorry about the game freezing. I was never able to get feedback on tara's path. I'm not sure why it's freezing, as it never happened to me, but maybe you're doing something I'm not.

For the other two paths, you are missing clues. Keep searching. Also look at your items. You may already have something you need.

I do plan to try and redo Tara's quest (it was so close to the beginning that I didn't save, oops!), and I plan to keep looking with the other two. I'm going to chalk the freezing up to an unhappy run of bugs, because it CAN happen (happened on my own playtest for my own game, and everything was set the way it needed to be for an interactive object), but wanted to point it out since both times it was in the same space. I figured I'm missing something with the other two, but I'm just not sure what to do or if I did something too early and broke the quest for both of them.

It might be a legit bug, but like I said when I tested that part it didn't happen. I'll message you on the Hawk discord in case you want to ask for hints. I'm glad you like the game. I appreciate it. I'm planning a 3rd for early next year.