Fly through an asteroid field and avoid your pursuers in this new take on a classic genre.
Submitted by Spartano46 — 11 hours, 56 minutes before the deadline
Add to collection 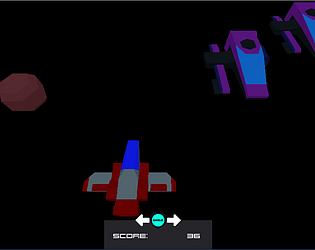 Which song(s) did you choose for the theme and how did you incorporate it/them?
Two-Buttons, used as the background music

Which parts of the game did you create BEFORE the jam STARTED?
None, all of the code was written from scratch

Which parts of the game did you NOT create?
The music, almost all of the graphical assets, and I used Godot Engine

Hey, great work. I liked the pacing of the asteroids and the enemy ships. It was challenging but not overwhelming. I also liked the menu system you created. One thing I noticed was once I was hit by an asteroid or enemy fire it immediately took me back to the menu, and in some case I ended up in the credits section by mistake. It might be more satisfying if you were to add some sort of delay between the game over state and putting the player back at the menu. Again, nice work, good luck with future games!

I like it. The look and feel kinda reminds me of old games like Star Fox. But I have some suggestions. You could have put a starfield with particle effects that move backwards. That would make the ship seem like moving forward. And the shield should have an effect to show it's going off. And also there could be a dash like powerup where you just blast forward with great speed for some time without taking damage. And I don't think the game speeds up as we progress, does it? It should.

Nice work. The game play is smooth and the models are great. I wish there was a background to help emphasize the feeling of movement though. With the music so fast and the ships moving along I think it makes it feel like they are moving slower than they are in contrast.

Thanks for the feedback! I'll make sure to add in a good background for my next build.