Dicey Dungeons is a brilliant introduction to Roguelikes and Deckbuilders

In what has been a long time coming, this week marks the full release of itch.io-favorite Dicey Dungeons. Indie superstar Terry Cavanagh (and team) has turned from puzzles and action to craft what is one of the most accessible routes into two of my favorite but complicated genres: Roguelikes and Deckbuilders.

If you know anything about Dicey Dungeons, you probably know that it’s a game entirely governed by dice. No not like craps. Taking the role of sentient dice in a variety of standard fantasy roles players explore, battle, and eventually overcome an entire dice-themed game show of peril and cuteness. It’s a really charming design that both embraces the random nature of dice and smoothes over some of its more frustrating aspects.

For the uninitiated, Roguelikes can be an intimidating nightmare. Traditional roguelikes are known for complicated interfaces, a buffet of options with little context, and potentially most disorienting: randomized content. Much of this extends to other more modern fusions and takes on the genre which tie progression to learning and understanding systems rather than individual pieces of level design. Part of what I love about Dicey Dungeons comes from its reduction of all of these systems to just what makes the game interesting. Instead of large open maps, you get small generated dungeons that reduce the large palette of options to just mechanical interaction between the second half of the game’s peanut butter and chocolate genre fusion: deckbuilding. 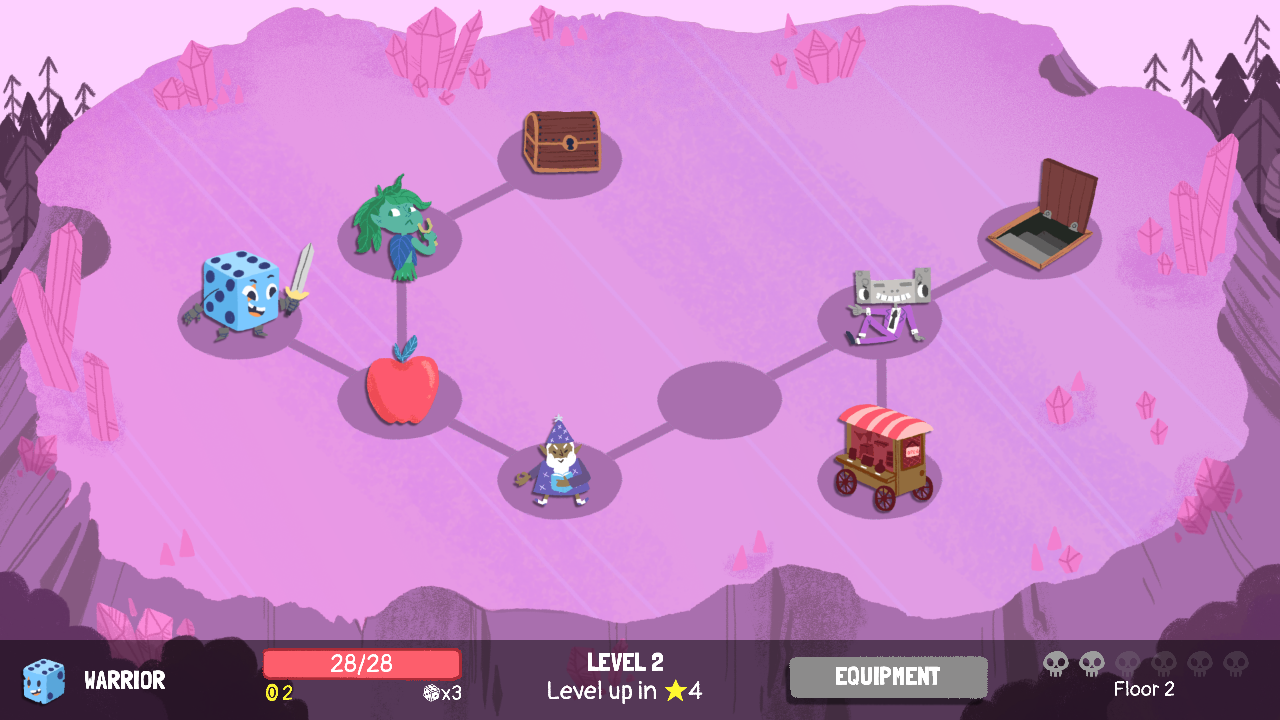 Ok so I’ve been calling the other genre that Dicey Dungeons introduces Deckbuilding, but it goes about it in a smart albeit roundabout way. In any roguelike with stats or unique items, the concept of synergy becomes one of the most important elements in powering up. Most of my successes in Roguelikes come from figuring out what my character “does” and making all of my choices in service of whatever this core interaction is. Dicey Dungeons has a similar system in picking skills, but where it teaches deckbuilding is in the dice at the core of the game. Each turn during combat you’re able to “draw” dice and then spend them on a variety of attacks or boosts. This means you’re trying to build a situation where there are no numbers on your dice that will leave you at a disadvantage (dead draws in deckbuildng parlance). In teaching people to play deckbuilding games, this is often the concept that I have the most trouble communicating and somehow Dicey Dungeons absolutely nails the simplest and most accessible version of this core idea.

I’ve written about Dicey Dungeons on this blog before while it was in early access, so I might be repeating myself with this but I think Dicey Dungeons is a subtly brilliant game and it’s hard to put that intelligence into words. Looking at the game you might see its cute art style, or you might get the gist of the combat in a lets play video, but sitting down to play it and spending time learning how it works spits you out the other end with a new skillset. There’s an education in Dicey Dungeons that never falls into lazy lecture or frustrating tests, it’s the kind of design that is so good because it gets immediately out of the way and only reveals itself on reflection.

Dicey Dungeons
Fighting against fortune would be a lot easier if you weren't a walking dice.
Terry Cavanagh

Dicey Dungeons
$14.99
Fighting against fortune would be a lot easier if you weren't a walking dice.
Terry Cavanagh