Opened the board for any suggestions and feedback.

Players are need a tutorial or something to figure out the keys and commands for this game. It's way to frustrating to enjoy all the great art and gameplay. PLus You might want to look into a better translation of you opening. It's a bit weird to read. I do like this game though. 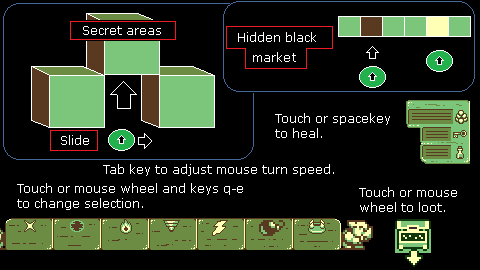 I will look in to it during the week :)

I should manage a update by thursday or friday..

Maybe i have to make it more clear in the image at the boot ?

The game engine used in pixelstein and 8 breed where originally coded for android hardware so i do forget sometimes  :)

Or more or less aimed first for computers and work on android devices also.

The old engine where coded from the ground up for mobile phones where i later ported it to computers that made it a mess.

Thats why the old help screen is a mess also.

Will put together a specific control info screen for computers.

I work night shift at the factory thats why it will take a few days.

Gladly. I like the art and concept of the game. I hope you'll have success with the update!

Made a first mockup for Linux and windows users.

I might have forgot to add gamepad support on some screens also i have to check :)

Do you think this is clear and still in right style?

Have to add it in pixelstein and 8 breed so wanted a neutral style..

Supported a artist on itch by purchasing a gui asset for 5 us dollars so iam on a minus in earnings again ;)

But think its fun to support others when i can. 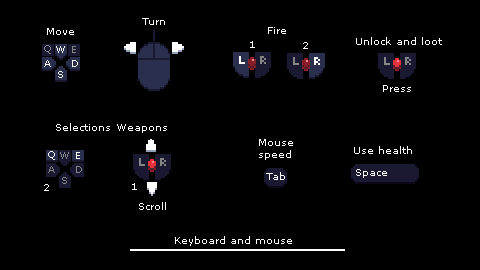 That looks good! I also think that if you have an overlay with these controls on it would help too.

Hey. I really love your games.

Theres just one little thing that concerns me in 8 Breed and Pixelstein 3d. Its the fact, that both games contain some information from the ad suported mobile versions. For example the "view ad for Points"-Button in the black market or the suggestion to see an ad to obtain features like "revive"  without spending points in the loading screen before a Level. I Know that these are just small things but if you could fix these few mobile elements, I would appreciate it.

Besides that, both games are wonderful experiences and have a great art style. Keep up the work :)

Thats pretty much that i coded the engine to use simple flags when compiling for wath version it is.

I will look in to it for next update but it will be at a later stage :)

Wrapping up a playable prof of concept alpha for its dark bob game :)