Apologies to the guy who put a bug report in the comments list, I didn't realise that adding a discussion board would wipe the comment thread.

Here were the first reported bugs:

Safety Car Gaps
"Cars behind the safety car sometimes seem to leave to much space to one another This happened to me twice in the same race on the Hockenhamring  (Random safety car rules ;-) ) where the field was essentialy diveded into 3 seperate groups in which the leading car of each group left a whole lot of space to the car in front of him"

Response: Yep, that seems to have been an issue. I've been able to fix this for v1.0.3!

Race Results Wrong
"Wrong standings at the end of the race. This also happened to me at the Hockenhamring where i placed the car in 8 place but was in 12 place after the end of the race. Can't remember it was the very same race as in the one above since i reloaded it a few times... just for scientific reasons of course."

Response: At the moment, I don't have enough to go on, and haven't ever seen this happen myself. Is it perhaps a possibility that race results and championship standings being confused? It seems very strange, and not something I've encountered through months of playtesting.

"Game breaking Bug at the beginning of the second season which does not let me continue after i acknowledge this years funding. The error message looks like this:

FATAL ERROR in
action number 1
of Alarm Event for alarm 1
for object BudgetConfirm:

Response (update): I've found the bug - one little number buried in the code was wrong, meaning that the wrong data was being fetched. All fixed now!

On Win 10.  Just bought the game, haven't played it yet.  It opened in a window that was very tiny, and could not be resized.  Went into settings, changed to full screen (only selected full screen, didn't change anything else), game crashed with the following message.

Hi, thanks for your bug report. I have some idea of what the problem may be with the crash. It must be caused by saving settings before having an existing save file. That aspect of it will be fixed in 1.0.6. Until then, however, it's possible to avoid this issue.

I don't know what could be causing the screen to start off so small. If you go into 'your user name'\AppData\Local\Formula_XD\FXDcustomise.ini and set the window width and height to something larger (1920x1200 is as large as it supports) and fullscreen to "1" - then launch the game - well, see if that solves it.

I have just had another urgent bug report recently so if you give it about half an hour, 1.0.5 will be available.

Sorry for the annoyance.

No rush to fix it. You are correct, it was the lack of a save game. I started a new game, then went into the settings, and could play. Including going to full screen. However, the small window remained prior to that, and i had to squint through the tutorial screens.  Let me know if you have any questions, or would like any diagnostics, ill be glad to help.

Hi. Glad to hear that the workaround... worked. About the screen size issue.... the minimum resolution that the game runs at is 1024x600, and it is also the default resolution. Unless your monitor has a really high resolution, I'm not sure what's up. Have you been able to go into settings and pick a higher video resolution setting and press the tick button to adjust it? Failing that, are you able to go into FXDcustomise.ini and set window width to "1600" and height to "900", or "1920" and "1080" for example? It seems very unusual. Does your monitor have a very high resolution compared to the physical screen size, like a 13" 1440p display? I'm really baffled.

I'm using a 2107 Microsoft Surface Pro i5. Its running at the standard (recommended) resolution - 2736 x 1824. I didn't realize that it was that high. That should explain the small window size.

Cool, thanks for getting back to me.... blimey, that's a high resolution! All I can suggest is setting the resolution to the highest I've tested it at, which is 1920 x 1200.

1.) When starting a new session of Formula XD and using it's screenshot function, screenshots done in previous sessions get overridden.

2.) On the Hamburgring i had one occasion in which a rouge safety car missed the leader which was then able to build up an considerable lead. I had made a screenshot but pls. refer to 1.) for it's whereabouts.

3.) Not sure if this is a bug or a feature: Also on the Hamburgring (maybe on other tracks to?) i noticed that you can pit during  a safety car session, when all cars are in safety car formation, without loosing any time or postitions at all when paying the maximum amount on the pit crew.

4.) Not sure if this is a bug or a feature: The next year's car performance data is currently at max or close to at all categories, yet when starting a new season everything is around 50% on this year's car (using the second best designer). Also performance for the next car is also nearly maxed out at the start of the season.

5.) Regarding the wrong race results i had previously mentioned: I'm relativly sure that the race was over and faded out when my driver was in 8th place but was listed 12 in the results screen without a mention of scoring points (you know in the interview or the hooray you are special notification at the buttom of the screen). So far however, i could not replicate this bug and i can't rule out that i ultimatly saw things that never happened.

Thanks man! The most damaging of these bugs (the end-of-champ car stats thing) was introduced in one of the updates, I mistakenly commented out a crucial bit of code. That will be fixed in 1.0.6. Also, I figured out why screenshots are being overwritten and I'm fixing that right now. The safety car issues, I'm mitigating, with some rebalancing of safety car speed. Please let me know if this remains a problem.

I haven't been able to replicate the 'wrong finishing positions' thing, but I have gone and changed the code a bit to make the finish results much more reliable.

I was able to finally replicate the wrong position bug using the newest version (1.08)! On the Hockenhamring i was on 6th position just behind the 5th placed driver (Hakkinen) when crossing the finish line.  Just before the racescreen faded away me and the driver behind me, who i just overtook in the last corner, both gained a position with Hakkinen now in 7th. Maybe he retired just after the race finished, or because all three were within a split second?

I also noticed three other bugs:

2.) It kinda feels like when setting the dev focus on the next years car that development on the current is also elevated.

3.) I had a few  instances where i got no sponsor bonus even though i should have. The screenshot below shows the standings after the first race (double points) with me finishing 4 and 7 but not getting the bonus for finishing the race 6th or better. 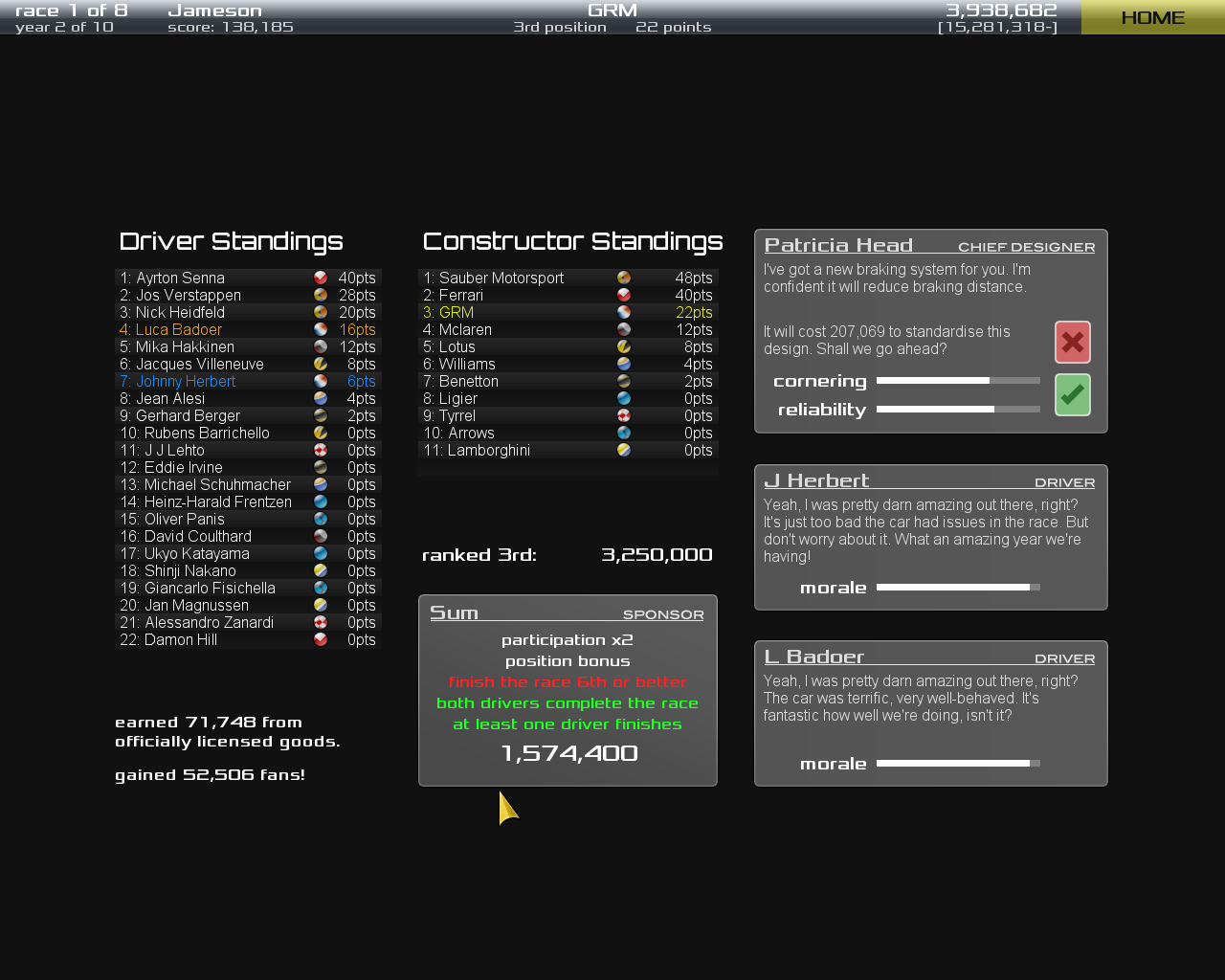 Hi, I have done some investigation. The sponsor thing was a bug, now fixed in 1.0.9. The car development thing is simply because your current engine supplier has a high Research stat - they're contributing toward your car's development with new engine parts. About the finishing positions thing - while I have no idea what can be causing it, I have now gone to near-extremes to prevent from happening (cars when crossing the finish line enter Lap 99,999 minus two times the number of cars that already finished - it'd really take some doing to interpret that wrongly).

After I finished my 7th season, I got this code error.

I feel like I saw somewhere that this is the limit of the game, but I am not sure.

yikes! I think it got to the end of the career or scenario without recognising it, or something. I will see what's going on and include a fix in v1.1. It may be that the tutorial starts at a later year (correct) but attempts same number of seasons (incorrect)

Sorry about that. Glad you got so far though, I hope it was fun!

Yep! That was indeed the problem. It only affects the tutorial-enabled career and it was a number that was an 8 and should have been 7. Fix will be included in 1.1.0 and that will be available this weekend, Sunday at the latest. For the time being, your best bet is to play Career with the setting 'new career help' disabled. Very sorry about that. 1.1.0 will also include graphics modding access, as well as PSD templates to help people get started.

Hi!  I've just reviewed your game page and must say that your game is quite impressive-looking.  I'm working on something similar myself although I am not that far in development yet and am still only offering to the F2P market.  I've read in this forum about a hard-to-replicate bug that causes cars to be assigned to the wrong race finish positions, and have seen nothing here about this bug being fixed.  I've also read in the changelogs that there's actually been some tentative fixes to address this specific bug, but I don't know if it got entirely rid of the bug or not, since I can't try the game myself at the moment.  However, since I've had to deal with similar issues myself while working on my own game, I know for a fact that there could actually be several different little bugs all hidden under the guise of "one bug" only because they all lead to the same result, aka cars being placed in wrong positions.  So, since this bug is hard to replicate to begin with, and replicating the bug is key to understand what's actually going on, I simply wanted to point out to you that there seems to be an instance of this bug showing in one of your screen captures, the one with the newspaper article about race results. 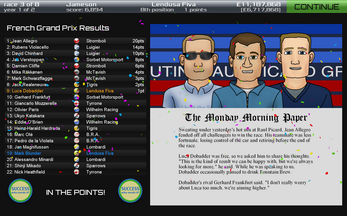 In it, it says that Jean Allegro won the race, which is confirmed by the rankings on the left side of the screen.  Then, the article goes on to say that his teammate hasn't been so lucky and actually didn't finish the race.  However, if we look at the rankings, we can see that Jean Allegro's teammate, Damien Cliffe, took his Stromboli car into 5th place, scoring 6 points.  So, there's this bug in full display right here.  Like I said, I don't know if this is still a relevant topic at this point in time, but if it is, I hope this little bit of info will help.

Hope to be able to try your game soon!

Hey there! Thanks for your question, and I'm sorry I wasn't able to read your post earlier. You're quite right, there had been problems at the launch of the game with incorrect finishing positions and it took a week or two  to work on them, but those are all solved now. The picture you posted was taken at the same time, so it's very likely to be related to that. It may instead have been some bug in the newspaper generator at that time.

If it is a newspaper generator bug, I will get it fixed in due course, along with some other very minor bugs (similar flavour-text stuff) I noticed while working on a major update that will take a while to finish making. I'll also replace the picture you copied into the thread here.