Okay, it's working now. your last update must have done the trick.    Would love to see the  original  free version included with this one on Steam, maybe add as a free dlc.  ;)

Thanks for the information.  I'll   try   your suggestions  then report back to you.  I'm very busy at the moment, so it'll probably be later this week at the earliest.  Regards Whiterabbit

p.s. I emailed a reply as well.

Hi, I've not been accessing my Itch.io account recently, so have only just seen your reply sent almost three months ago. I understand.  I do hope to see it  on Steam eventually. Good luck with development of this and any other games you may be  planning or working on.

Hi,  hope you figured it okay.   I sometimes change my  resolution when playing older games that  only play in a window. The lower the resolution, the  bigger the window becomes.   Take care and stay safe in these uncertain times.

If you ever want to  link up  game wise you can find my Steam  profile  via the following link:

I don't check my friends requests often.  If you do send a request, let me know via this thread as well;  as I get notifications   when  a reply to a thread is made.  Also let me know your Steam name as I have  around 50 pending  requests (most  send request because they want something from my Steam inventory;  I tend to only accept friends request from  community members who have friends in common, unless I've specifically invited   people.  :)

You could always  change your screen resolution temporarily to accommodate the game, just right click on your desktop, click on display settings, the scroll down to display settings. I know this is  'maybe' a little inconvenient, especially if you don't use one of those programs that keeps a memory of where your  desktop icons are placed as  sometimes changing resolutions can upset the arrangement.

The following  links  may help:

p.s. please don't take the above as a condescending reply.   I was just trying to help. I'm also sure there are convenient freeware programs that can help with  resolution changes.

But keep getting  page has timed out message?

Excellent breakout, with some  really nice features. I love the quirky graphics. I've played a lot of  freeware breakouts  over the years and this definitely stands among the best freeware breakouts (e.g.  Beat Ball,  DX Ball,  Peoing,  Jardanians,  Jarkanoid 3, Powball and Takamaru to name a few of the freeware games I still play occasionally) .

I'd love to see MadCowBalls on Steam;  I would be happy to pay the same price as MadCowsBalls 2 (which I purchased but can't get to work {possibly due to running Win 10 Pro}. Personally I think your v2 is worth more than what you are selling it for).

I've played hundreds of breakouts  since the very first one was released back in the 1970's;   I spent a small fortune on  the original Breakout  via one of those  stand alone  cabinet games from the late 70's  (while I was in the army over in Germany; it used to cost 1 Mark  for  three  goes -  that was  about £0.33 at the time as the pound was devalued while I was over there)  and throughout  the 80's they were popular in most  public gathering places.  They even had ones  where you could sit down and play via a table  like cabinet.

I think this free version is well worth some money.  Maybe you should add it as a DLC for  your Steam version?  I realise you have to pay to get  games  on Steam, so you could  ask the community via the  news page  for MadCowsBalls 2,  to gauge whether it would be profitable.  I don't know Valve policy, but they do allow  free games on their site.  Maybe it could be added aas a free DLC for MadCowsBalls 2.  That may evn boost sales for  your commercial version?

Sadly   breakouts don't seem to have been very popular for the past decade, at least with developers.  There have been a few decent ones released   since  the seminal Ricochet Infinity was released back in 2007, but generally breakouts  are sorely deficient on both Steam and generally.  :)

I purchased this via Steam  when it was released as I love breakouts; but I  cannot get the game to work.

All I get is the installer window (see attached image) with the two Start buttons for Arcade and normal play plus the other  buttonssuch as Options,  Exit etc, but none of the buttons work.  I've tried every  key on my keyboard and my mouse to no avail. 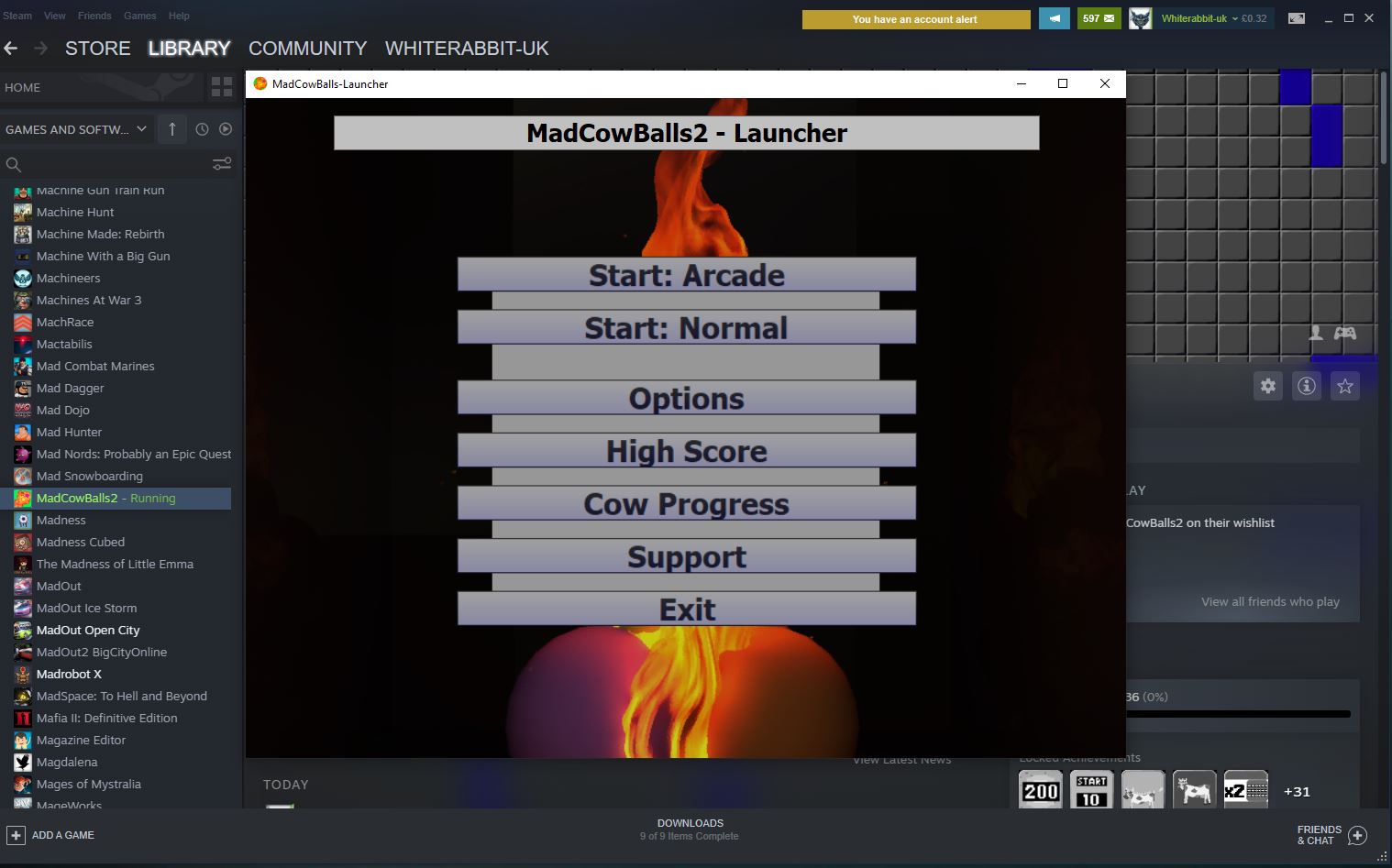 To the developer Martin, please help.  You can email me on Whiterabbit-uk@hotmail.co.uk

p.s. I've  validated all the files and they work.  My system runs Win 10 Pro

The following are particular music/beat oriented games  that I enjoy playing:

And I wish to buy Beat Champion and Beat Hazard 2  when I can afford to as well as  Beat Blast when it's released.

I loved Sentris so am looking forwards to the final version of this on Steam. Just downloaded your prototype.   Thank you.  Appreciated.

p.s. if you require any beta testers you can contact me via my Steam account Whiterabbit-uk or email me on Whiterabbit-uk@hotmail.co.uk  I've beta and alpha tested for several indie developers such as 2D Boy (World of Goo), Dejobaan Games  AaAAaa: A Reckless Disregard for Gravity, as well as others and distributor/developers such as Alawar (breakouts match three's and time management games mainly) and others. I love unusual and original  games and am always happy to help.  I'm not looking for a free copy as I've always believed in supporting  developers by buying their final  released versions. You can see from my Steam account that I love games.

p.s. only just  noticed your Q&A regarding Steam, so please ignore my question about  a Steam release.  Great news.  :)

The game looks excellent.  I'd love to see this game released on Steam; perhaps in early access until it's finished.

I would certainly consider buying it if it was released there as I prefer to keep my games in one place (i.e. client).

As Steam has a fantastic community and some innovative game tools  that allow me to keep my library  they way I like it, I've stopped buying games  from other sources.

As I have thousands of games (my Steam profile is Whiterabbit-uk), I don't mind missing out on games I would like to purchase; so its always nice to see   games such as yours  released to Steam.

I'm all for supporting small indie developers like yourself who release decent games; not the £0.79 games that seem to abound on Steam that in the main have been released  by wanna be developers using those free game engines to    released  umpteen  trash games  with virtually no real  game play value; most can hardly be called a game.

Reply
PowBall Renaissance community · Created a new topic Thankyou and some ideas to include in future updates. :)
Whiterabbit-uk1 year ago
I

I was so pleased to  see  the release of renaissance last year. I bought the original many years ago before it became free to download and loved   the innovative ideas that were included.  I'd just like to say thank you for the Steam key. I prefer playing my games via  the Steam client, so was pleasantly surprised when I  saw your email  about the update to the game, which I   downloaded once I'd signed into my Itch.io account, then I saw the  offer of a Steam key. Very much appreciated as I've been on a very tight budget for the past year..

I have   a massive collection of  breakouts, but most are  either sub par,   or lack something that makes them a great breakout. I think  your game has the makings of  one of the best (my favorites include the Ricochet  franchise, Arcon Toys, Breakin, Incrediball - The Seven Sapphires, Ploing 2, Little Gods, Rival Ball Tournament, all of which were made around the same time as  your original game and all have something  special about them. There are others, but  I've forgotten the names of them offhand). The only issue I have with  Renaissance is the  ship speed. It always feels really sluggish.  I also think the initial ball speed is very slow.  Would it be possible to include the ability to select different start speeds for both the ball and bat/ship at the beginning of the game via the options?   I'd also like to see  the ability to select different shaped ships/bats  and  balls. This would give the ball movement  a more random  bounce from  either the ship/bat  and when it hits   the various objects/brick  in the game.  Adding different types of  missiles such as  guided missiles,  lock on missiles etc, exploding balls, mines sweepers and satellite balls that revolve around the main ball would also be nice to see in the shop.