That's some great art! I'd love to work with you! My discord is WaSi#3963. Send me a friend request, and we'll talk more there.

No. I'm just looking to team up with an artist who also wants to make a game of this kind.

Judge only the game feel (make sure to speak to the npcs to check out the weapons/spells and better mobility!) to see if you're interested. Artwise anything can be replaced, the game doesn't even have to use a gbc art style. Your call.

Some things to keep in mind:

Everything else is open to debate. You'll have as much creative control as I do if we partner up.

You have to charge the jump meter with the mouse in casual mode. Check the description for more in depth instructions and if it still doesn't work, I'll check it out.

By the way, here are some pointers to help with the timing and jumping in general in normal mode.

When you're trying to bounce, you usually need to get the most out of your jump, so it's usually best to press and hold the jump button again immediately after you jump. If you do that, even the shortest (as in least high) jump you can perform gives you enough time to fully charge the next jump.

As for the timing, if you've noticed, when you hit the ground there's a small landing animation. As long as this animation is playing the jump meter does not reset. That's when you must release the jump button to get the timing right.

Hey AlphaBetaGamer. This shouldn't be happening, it's either a bug or you're doing it incorrectly. You must hold the left mouse button to charge the jump and the right to uncharge it and it stays put. Then, when you tap you jump as high as you've set it. If you hold she will still charge a high jump. It's in the description  but maybe it's not clear enough. Have you done all this and it doesn't work? If yes, I'll take a look again.

No problem. Thank you for the feedback :)

Haha, that's ok. Of course I had to make it necessary to complete the tutorial, because if you couldn't do that and started playing the actual game, it'd be a disaster. So I figured It'd be best to practice them first in a place you can't die.

You know it's not that hard for me, but that just goes to show what happens when you don't have playtesters or get feedback during development... You end up making a game only you can play. The funny thing is I kept making some levels harder, because I thought they were too easy... Depending on what feedback I get, I might also tweak some levels in PrincessCasual.exe to make it all around easier.

Anyway, let me know if it's better for you now with the casual controls.

Have you already downloaded it? I noticed an inconvenience. The jump meter resets to lowest upon transitions. I'm uploading an updated file without that problem. If it bothers you download it again.

Yeah, it's not for everyone. I was thinking of including more traditional controls before releasing the game, but decided to wait and see what people would say... And turns out the first comment is a complaint about controls :P. Damn.

It's easy enough to do, but the problem is that all level design goes out the window if I do that... But I suppose not everyone's looking for this kind of challenge.

Alright, I'll think about this and probably do it. Anyone else feel the same way about controls?

EDIT: Done. Let's see if this will work better for more people.

First of all, hey everyone, I'm new here, I found out about this place while looking for a place to host my game. Don't know if this is the proper place to introduce myself, but I might as well kill two birds with one stone.  So, nice to meet you :).

Alright, the game is a pretty unforgiving platformer starring a princess who hits things with her head to smash them. It's my first game and I wanted to keep it simple but I tried a couple of weird stuff, like losing your balance if you're too close to an edge, jumping by releasing the jump button (pressing it charges the jump) and not having too much control in the air. All these combined make the game less about having good reflexes where you'd get out of a sticky situation by a last moment jump, and more about being aware of the environment, since there can't be a last moment jump unless you've prepared it.

EDIT: Since I like customization and got a complaint about the mechanics being too hard, I'm now also including an .exe that allows players to choose which of the above to have in their game.

There's also plenty of NPCs and cutscenes. Talky stuff. Doesn't really have much to do with gameplay, but I thought I'd mention it.

Here's an image that isn't on the game's page: 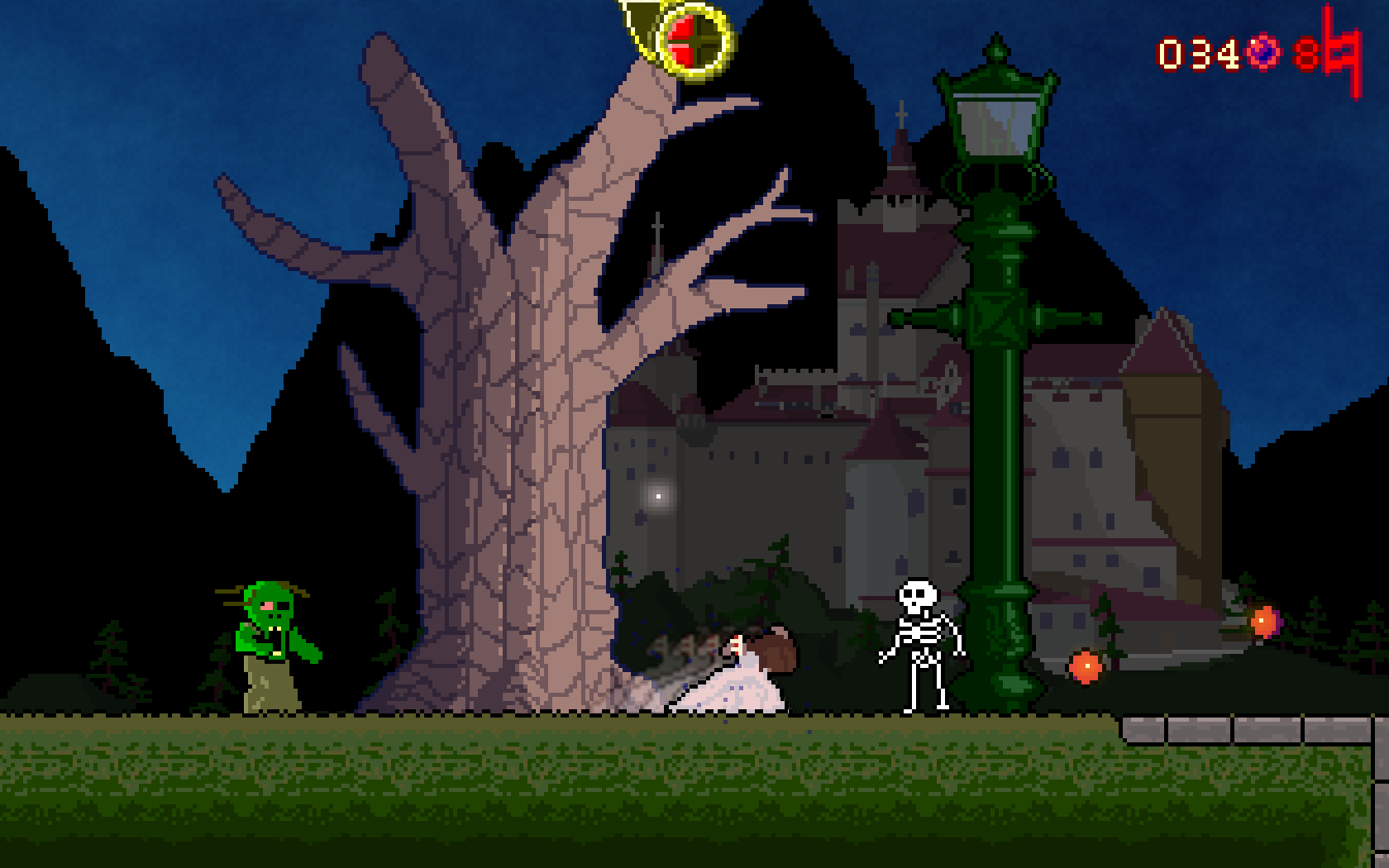 And the gameplay video I included on the game's page: