The code and video are extremely useful and professional.
I love the banner.

These tips are applicable to users of other game engines as well. (eg. Godot)
I now understand that great control scehemes are created this way:

+ I'd personally experiment with an even faster grappling hook, it's fun.
+ I love how charging up the arrow determines how far it goes.
+ The sword feels kinda slow. Maybe experiment with 3 fast hits and waiting before doing 3 fast hits again.
+ How about a faster roll?

Anyways, I just wanna explore and find interesting things in this world.

This game is everything I want out of a platformer.

Wow. Great concept, excellent pixelart, (seriously, I love the art so much.) and decent gameplay!

It was kinda hard to understand what was going on after I was overthrown, and I wish I was able to pause the game at times to read the actions available to me. I did eventually learn it all though.

This would easily be a beloved game of mine if it weren't for the jump and dash physics being this... irritatingly bad.

The art and atmosphere is great.

The whole experience makes me feel like I need to protect this tiny, fragile creature in a cruel and unjust world.

I love this game. Would pay for a full version. Just expand, upload to steam and boom. Amazing piece of art.

I didn't like the acceleration and jump curve of the player.

The jump felt like I'm continuously giving for upwards to the character which isn't realistic nor good feeling.

I didn't feel the character really being influenced by gravity either. With some squash and stretch and speedier fall, that would've been better.

Speeding up didn't feel snappy and the player is maybe a bit too slow as well.

These problems could be relatively easy to fix either by just tweaking parameters and/or looking at how other people coded responsive and juicy platformer controls. Good luck with learning this :)

Despite me not liking the controls, the AI actually has a character with a cool arc, which proved to be very enjoyable. I'm glad you took the time to make a conclusion, the whole story would have been way worse without it.

I think so. It was aight.

I guess that's it. Thx for stuff.

Honestly, I just took it easy and tried to combine things I already had in ways they would complement each other.

For example, I had the shader, so I generated some low res and not so impressive quality pictures generated by AI and they made for great backgrounds.

The shader inspired the gameplay using light, as that seemed like it would lead to great visuals. This then inspired the very simple gameplay as well.

(As for the background and walls having the same color, the shader uses color reduction, so that would have been pretty difficult to change. It's fine imo, cause you can still eventually figure out which are walls and which aren't.)

I thought of it, but I just didn't want w to create a stressful experience.

Not an inherently bad idea though. Would add variety for sure.

My ears were kinda destroyed and when I started the game I immediately started backing up because I couldn't aim in a normal way.

Yeah, it's just a maze, you go through and that's it. It was fun to make and that was my focus this time :)

I think "Not prepared for this" really sums it up well.

I am scared now.

You never stop playing with my expectations, brilliant design.

You made me feel dirty.

Honestly, by the end I was pretty sure I just let some world destroying force out of a facility meant to contain it.

The octopus is kind of intimidating and I love the storytelling you do with it.

The step sounds are cool, wish there was more sfx as well. Helps with the atmosphere.

I'm usually not a big fan of easy puzzles that you have to solve, but it totally works for me here, because of the story.

Would honestly love to see more!

Thank you! I thought the concept was probably the weakest part of my game, so this is reassuring ':)

Btw, Teaching Bird was pretty funny, so I'm eager to try this version! :)

Reply
Wowie Jam 4.0 community · Replied to GGGamesXDlol in Idea Help (Read if you're struggling to find an idea)
TheoTheTorch116 days ago

I am too tired to reply to every comment, so I will do it this way.
Thanks for every bit of feedback, we really do appreciate it :)

The game currently looks decent, but the gameplay is not in a great state. You can't feel the impact of the dice, as it is minimal, mechanics are not really explained and the enemies are basically dummies that happen to hit back. The current best strategy isn't the most engaging either.

Due to the strict time limit and life getting in the way, we weren't able to fix many of these issues, and the game has notable bugs.

I hope you still found some enjoyment in the game.

I believe we learned a lot of things while making this, which we plan to incorporate into our future projects.

The art looks decent but it is not coherent at all. Player animations look sick, but the move the player in unsatisfying and physically incorrect ways.

I don't know why this control scheme was the one chosen, nor why the player has to summon the boss in the end. I feel like the boss could've been there before I pressed any buttons.

The way the character moved also felt unnatural a bit, though I see much potential with this.

I like the looks, the controls were intuitive and the gameplay was alright as well.

I like how you gave me a bit of motivation at the beggining: My goal was to defeat chance. And so I did. Pretty cool.

Your player and enemy look cool, but the rest can't be said about the UI or background.
I think they could've fit together more nicely by using a color palette.

The gameplay is not my style and also feels a bit generic. Though the idea of having the cube roll on it's sides instead of walking normally is interesting, that doesn't really affect anything.

I liked the explosion.

I am 4 parralel universes ahead of you ;)

10 minutes later, still listening to the music. It is so good it's almost a crime. Please upload it somewhere.

Very similar to our idea, just much better in the way it actually handles gameplay. This is a submission that I see being in the top 20. Great job.

Can you please PLEASE share the music somewhere? I want to listen to it for at least 4 hours. Please.

I think the art would've looked so much better with a constant pixel size. This is not really pleasant on the eyes.

That said, I LOVE the humor in this game! The text pulled me in and the gameplay somehow kept me playing until the end. It's mainly the additional stars you can collect that achieved this, I think.

I'm not sure how well the gameplay works because when I try to play fullscreen, the tutorial text isn't visible, because the game screen can't scale well. Playing without fullscreen is a pain., since you need the whole screen for mouse movement.

I like most of the visuals, (our UI looks kinda similar, actually.) except for the background color.

The gameplay is hard to grasp at first, but I sort of figured it out by the end. I don't see why are there dots both on the dice and the floor sometimes though. I think it could've been more intuitive if only the ground had them, the "dice" would just have single colored sides, which would work the same way as currently, just in a less confusing way.

The difficulty curve isn't the best and I got stuck on the second level.

I think the gameplay isn't very fun. The only input you have is throw dice. That is too much randomness, you have no control over anything.

The level feels samey and I feel no drive to keep going, as I have no real goal to reach.

I like the sound effects, but the music doesn't really fit in my opinion.

Not too sure if I am ready to forgive yet. 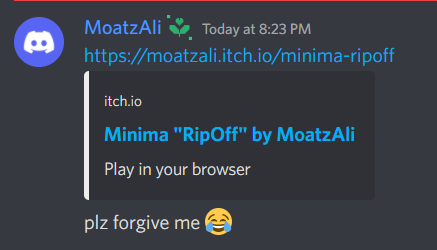 Imagine if the game looked as good as the thumbnail. Just. Imagine.

I think limiting yourself to only purple and black would have helped a ton in consistency. Or at least limit white to only collectables/UI elements and text. Right now it looks like the aside from the enemies (which are cool) and player, the rest just feels like a prototype. The reason why I bring this up, is that there could be so much more potential with this.

Your take on the theme, while wasn't apparent to me at first, is a great one! I'm surprised you got a whole rougelike system up and running here!

The music doesn't reeeaally  fit in imo. I wouldn't necessarily call 8 bit SFX a cool feature, imo they really sound samey over all the gamejams going on and the only sound that fit well was the shooting sound.

I don't know why, but your player looks much more poorly designed compared to the enemies. They're all soft and don't really have any hard edges, while the player does.

Speaking of the enemies, they would need some rebalancing. The turret looks like a better player. When I shoot it spins (which made me confused at first, that usually isn't what makes me think I dealt damage) and starts shooting in a random location. This means I'm able to stand in one spot and shoot it until it dies. Also, for some reason it's bullets destroy mine, which can make for unintuitive and unavoidable damage taking moments. The big eyed enemy is too fast and forces me into corners. The triangles are perfectly simple and squishy, but realizing they are actually enemies took me some time, as they stand around a lot and dash slowly.

I've had a favorite moment when I encountered a room empty aside from about 20 triangles. That was a nice change of pace.

The UI looks so out of place. You could have also added a prompt saying you can press space to open the map. The rest isn't necessary, especially if you're low on time, because a lot of games use WASD + Mouse controls and it's fairly intuitive. I also don't know why I am apparently collecting coins. That just feels kinda generic and unnecessary. I used the word necessary at least like, 4 times in this review, lol.

To be honest, this game feels unfinished and a little unorganized. You've got a great system and idea though, so I won't be rating this too low. Imma try to be fair. Just next time when you enter a gamejam, focus more on:

You've got skill and if you focus more on these, imo you can make some great stuff. You can even consider expanding this game. You would probably need something to make it more original, but you could make this bigger. I'm just saying to consider it.

Also, I am now realizing this is the longest comment I've written in this gamejam and it's an absolute wall of text. Oh well.

Have a good time makin' games :)