This is a great discussion that needs to happen. Thank you to the Admin and Moderators for leading this effort to improve Itch.io and make it a safe space. I'd like to suggest that perhaps there is a deeper underlying issue underneath. Before coming up with a content/age rating system maybe it would be good to clarify what content is allowed (even within the adult section). I elaborated on this topic on a recent post that suggested a change in the Terms of Service. I encourage you to check it out and take action. Thanks!

Reply
itch.io Community » itch.io » Questions & Support · Replied to Eldwood in Why is there a rape tag?
Teophilo172 days ago

You are right. Sexual abuse should be condemned regardless of the sex / gender of the abuser and the victim. That is a good point. I gave you credit for it in the new post.

I would appreciate if you participate in the discussion in the forum. Thank you!

Reply
itch.io Community » itch.io » Questions & Support · Replied to Mango Scribble in Why is there a rape tag?
Teophilo172 days ago

No worries! I just created the thread. You can find the link here.

Following a conversation in a previous post, some of us felt like a change is needed in Itch.io's Terms of Service. Specifically the section 3 (Acceptable Use) :

Currently, the terms are expressed in a way that is open to multiple interpretations. This is an issue because if the rules were to be strictly enforced it could result in excessive censorship. On the other hand, not enforcing the rules is not the solution either, since that leads to a state of permissiveness in which anything is allowed. Plus, rules only have meaning if they are enforced, otherwise they are pointless.

So, I believe the question is not whether we strictly enforce the rules or we decide to overlook them. Rather, the rules should be stated in such a clear unambiguous way that they could be followed consistently withoud leading to extremes.

Therefore, the suggestion is to clarify the meaning of the rules that prohibit racial intolerance and sexism. We would like to allow games that depict racial intolerance,  sexual abuse or discrimination when the intention is educational. However, at the same time, we would like to prohibit games that glorify either racism or sexual abuse, games who side with the abuser instead of with the victim (regardless of the sex or gender of the abuser), whose intention is solely delighting on the abuse portrayed for the gratification of the viewers.

As the Terms of Service says, the aim is "to create a safe environment for users of the site and service. This requires a community that is built on goodwill and responsible behavior by its members".

I would like to encourage a constructive discussion in which everyone can participate to contribute in this effort to make Itch.io a place where users can feel both safe and free to express themselves.

I would like to give credit to Mango Scribble and to Eldwood for developing some of the ideas expressed here.

That sounds good to me. Thank you.

Would you like to start the thread? I feel I tend to sound a bit more leaning towards censorship whereas the way you expressed your opinion  seemed balanced to me.

If you prefer I take the initiative I’ll create the post tomorrow morning.

I couldn’t agree more with you. I for sure support your suggestion that a revision of the rules is needed. That is probably the best solution that avoids the two extremes (either excessive censorship like you mentioned or not enforcing the rules at all, both equally bad I’d say).

So, moving forward, how can we ask for a revision of the rules?

I see your point and I agree with you. Perhaps I didn’t explain myself. I believe the rules prohibit content that “promotes or participate” in sexism or racism. By “participate” I think it means “take part”, actively involving for a cause, not just mentioning a topic for educational purposes (that is something different, it’s not actually advocating or promoting discrimination, it’s the opposite: educating to not discriminate).

It’s clear when a game is just depicting discrimination to tell a personal story, and when a game is presenting sexual abuse for the gratification of the viewers. We all know the difference when we see it, right?

Reply
itch.io Community » itch.io » Questions & Support · Replied to leafo in Why is there a rape tag?
Teophilo174 days ago (1 edit)

Thanks for the clarification. That makes sense. So users are the ones that create new tags, without any restrictions for now.

However, my original question goes a bit deeper than just addressing the technicality of how tags are created. Rather, I meant to emphasize the why certain games under certain tags are allowed.

Just to be clear, on itch.io's Terms of Service, specifically under section 3 (Acceptable Use) it states that "Prohibited actions include but are not limited to: posting content that promotes or participates in racial intolerance, sexism..." (among others). If one looks up the definition of sexism (Wikipedia link), it is quite clear that << objectifying women and portraying them in submissive roles reduces women to mere tools, and is a form of sex discrimination>>. By allowing certain games to promote sexual abuse (rape included) and sexual objectification as their main content, are we not allowing sexism and thus violating the Terms of Service?

If that is not the case, I would like to know what constitutes sexism and sexual discrimination according to Itch.io. Just so that I know if I'm only wasting my time by trying to report here games that are inappropriate.

I think we can agree that rules only have meaning if they are enforced. Otherwise, they are useless.

Awesome game! I really enjoyed it. Cool idea, good graphics. I found it a bit challenging until I discovered the "trick": circling the light around at a regular pace works wonderfully, better than shining the light at specific obstacles. Perhaps to prevent that trick you could shorten the "memory" of the ships... For example, every second they "forget" where the obstacles are, so they need to be constantly reminded / redirected.

Reply
itch.io Community » itch.io » Questions & Support · Replied to Rafster in Why is there a rape tag?
Teophilo174 days ago

Hi Rafster, you are right, there is a url exclusion feature which was added 4 years ago, and is not useful when trying to combine tags. Hopefully exclusion filters will be added in the near future.

However, I don't completely agree that this is the main problem. Granted that excluding certain adult tags would help... but this approach alone would be similar to burying one's head in the sand, or sweeping dirt under the rug so that you don't see it. The problem is still there, is not going anywhere.

I believe the solution is not hiding potentially abusive adult content from some viewers, but examining scrupulously such games and actually enforcing the rules whenever illegal / questionable content is found. Not closing your eyes, but opening them wide. It's not a blindfold what we need, it's a magnifying glass  ;)

Reply
itch.io Community » itch.io » Questions & Support · Replied to Eldwood in Why is there a rape tag?
Teophilo174 days ago

You make a good point, Eldwood. If a particular activity is deemed illegal (whether it is sexual assault, or murder or drug trafficking...) then anything that glorifies it / promotes it should be considered at least morally questionable.

And you are right. There is indeed a fine line between the legal artistic representation of an activity (like violence in movies, comics...) and the illegal incitement (instigation to violence, Incitement to genocide or hate speech, which are considered crimes). Many videogames take advantage of the grey areas in the law. Fine. But from a moral point of view, there isn't a grey area: if a game promotes an activity that in real life is illegal, then that's plainly wrong.

Perhaps many believe that what they see on TV, or the games they play don't affect them at all. But is it maybe possible that there are people (even older than 18) more impressionable that can be shaped in their way of thinking by the violence / abuse that they consume on a regular basis? If that is the case, could it be that some of them would act on those acquired thoughts? To deny that would be like denying the power of advertising.

I believe the question to consider should be: what do we gain vs what do we risk? By assessing the risk we would answer the question: is it worth allowing media to glorify illegal activities? At what cost? What are the potential risks? And how do we benefit from it... what do we get in exchange? Is it really worth it? Well, that's open for debate.

Reply
itch.io Community » itch.io » Questions & Support · Replied to No Time To Play in Why is there a rape tag?
Teophilo174 days ago

Thanks, I have already reported a game possibly containing child pornography, based on the comments and images. I look forward to hearing from the staff about the course of the investigation. Hopefully, we can make this platform a safer place.

Reply
itch.io Community » itch.io » Questions & Support · Replied to mid in Why is there a rape tag?
Teophilo174 days ago

Thanks for your comment. You are right, that is a thing, unfortunately. However, there are certain instances in which a person cannot give consent. For example, if someone gives consent because of coercion (blackmail, external pressure...) it is not a valid consent. Legally, if a person is not conscious cannot give consent either (for example, when sleeping or drunk), even to a spouse. Besides, even BDSM has its legal limitations: nobody can't consent to get seriously injured. Here is an interesting article about that. How many sex games actually depict affirmative ongoing consent? Most of them don't, showing some kind of coercion, threat, abuse of power... to get the victim's "consent".

Reply
itch.io Community » itch.io » Questions & Support · Created a new topic Why is there a rape tag?
Teophilo176 days ago

I'm concerned about how quickly adult games are escalating on Itch.io, becoming more popular and more extreme in their content.

If rape and sexual abuse are illegal, shouldn't the glorification of sexual violence portrayed in videogames be illegal too? Some people may argue it's only fiction, there are no real people getting raped / abused, it's only a game. But think about it, racism is illegal in real life, is it then appropriate to create a videogame that glorifies racism? Of course not. Then why the double standard?

I would like to request that games that openly advertise themselves as containing sexual violence (rape, assault, sex abuse, humiliation...) for the sexual gratification of the viewer be reported and considered for elimination from this platform.

Please, don't turn a blind eye on this issue. I know adult games are top-seller and profitable, but they shouldn't be given a free pass to glorify sex abuse.

I have encountered a game (called Nai's Training Diary) that possibly depicts child sex abuse. I don't know for sure since I haven't paid / downloaded it, but based on the comments and images, I wanted to report this game.

I'm not the only one worried about the content of this game, here are some of the comments: 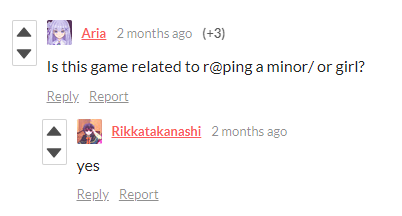 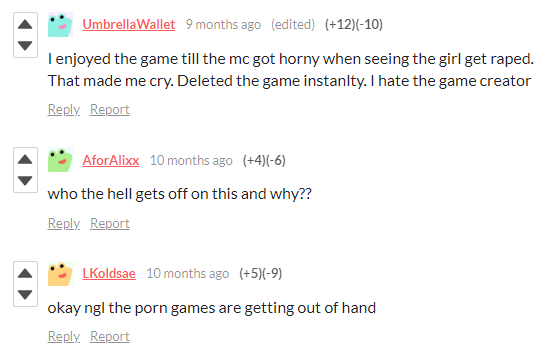