Apparently my memory of the 'have/has' typo was backwards.

It's in the character description:
"[playername], like their companions, have no memories from before Sublime set them free."

One major issue with a specific boss:

Holy fuck can we please get some sort of "I have absolutely zero interest in listening to repeated transphobic and fascist bullshit, let me skip to the part where we beat this scumbag into the ground." button for Gaius?

That dialogue drags on well beyond any reasonable degree of tolerance, and if the deadnaming is censored then why not censor the misgendering similarly?
I get that it's hammering in "This is a bad person", but it's not fun, it's not interesting, it's wasting my time and presenting far-too-real bigotry that I would never willingly tolerate for such a duration.

You're meant to be leveling up your items like the tutorial demonstrated, and using Ravage to amplify your Exploit damage, along with Taunt and Heal for sustain.
If you're struggling, make sure you're upgrading ALL your equipped items and then buying the next tier at the shop.

Edit: Highly recommend anyone that enjoys the demo to go back this on Kickstarter.
At time of posting, it's still a little short of the baseline goal, with only 4 days left to support it.

Just finished my first playthrough of the available snippet.

I really like the Embrace/Reject approach to acquiring personality traits.
That's a very clever little feature, and neatly avoids the pitfalls of other personality/morality systems.

There's the odd typo I've noticed in the demo, but I assume those will be checked over and fixed for/following full release.
(Ones I noticed were an instance of 'they/them' pronouns being paired with "has" instead of "have", and a dialogue option that mentioned going East when the instruction was West.)

The characters are interesting and distinct, and they all react fairly understandably to their circumstances.
I'm definitely looking forward to learning more about each of them. ... though I know exactly who my least favourite is already.

It's especially cool to see that it seems certain dialogue/action options are accurately reflected in how characters respond to the protagonist.
Thinking specifically of the fact that, as soon as it was clear Subject 1 couldn't (safely) see for himself, I started picking any options I could to give a clear description for him. Which he notes later!

Another major positive: excellent accessibility options.
Really nice to see devs give due consideration to accessibility, and even provide multiple settings (including no time limit) for QTEs.

Thanks for the demo!

Is it possible to request text input from the player?
For example, to ask for a name, to then reference that name elsewhere?
(The Words feature seems to reference something like this, but if it's already present then I'm missing it.)

Another feature that might be useful is randomisation.
(ie: Generate a number between x and y, or pick 1+ options from a set list.)

A more complex version of which might include allowing performing mathematical operations against another value.
(ie: Generate a 3d6 dice roll, or modify a points value using a random number.)
Seems like that would open some interesting options. Though I know there can be some glitchiness with modifying points values already, so it might be a nightmare to make work smoothly.

Ugh, I just typed up a whole response and lost it to a misclick, so I guess I'm going to try and summarise what I recall.
Apologies if bullet-pointing it comes off as harsh or curt as a result; not at all my intent, and I appreciate the response.

Fair enough on the error. Itchio could perhaps use an 'undo' function there.

I know I'm missing one or more things that I definitely typed up before, but I can't recall right now so I guess that's the best I can do.
Sorry again if the readability and tone has suffered in the retype, and thanks again for the time and effort you've taken.

Uh, pretty sure I made a comment a not-too-long while back about the Witch playbook; namely the note attached to it.
Specifically how the gender essentialist elements in that note have some unfortunate implications, and are alienating to transmasculine and non-binary players.

Did that point of criticism get deleted?
If so, why?
(Without context, that is deeply concerning.)

A month later but... I don't think you noticed that the only toilet area is unisex.

Why does the AppData/LocalLow/OleanderGarden/Pagan3/Unity folder include Analytics, along with a configuration file that asserts that the user has not opted out?

The user is never given any opportunity to opt out, so it ought to be assumed that the user has not in fact consented to analytics and tracking. Particularly under the EU.

Perhaps this was an oversight and it isn't actually active, but either way it should set correctly or removed.

Reply
Mission: It's Complicated community · Replied to misha.velichansky in Two Criticisms (Spoilers Ahead)
CyberneticSusurrus2 years ago

Appreciate the response! It's actually really nice to read your thoughts and get a little insight into the process.

I mean, despite those two points of criticism, you still produced a great game with quality writing that's enjoyable to play and share, and it certainly handles Queer representation much better than many others.

The development process being what it is, it's always going to be a case of having to decide what is 'good enough' based on the resources available at the time. It would be unreasonable for anyone to insist on endless rewrites in pursuit of perfection, because it would never be done and there would be no game at all.
Like you said, it's just a matter of taking any lessons forward into later work.

As far as the gay vs non-binary element, that's one reason that some might use 'Queer' as an identifier instead, although in Zirconia's case there's an understandable emphasis on 'not interested in men'. At the end of the day, language is mutable and identity is personal.
(Although someone for whom 'gay' means 'exclusively interested in [x]' rejecting a non-binary person is an excellent opportunity, narratively, to have disappointment at rejection softened by the validation.)

Thanks again for taking the time to reply. 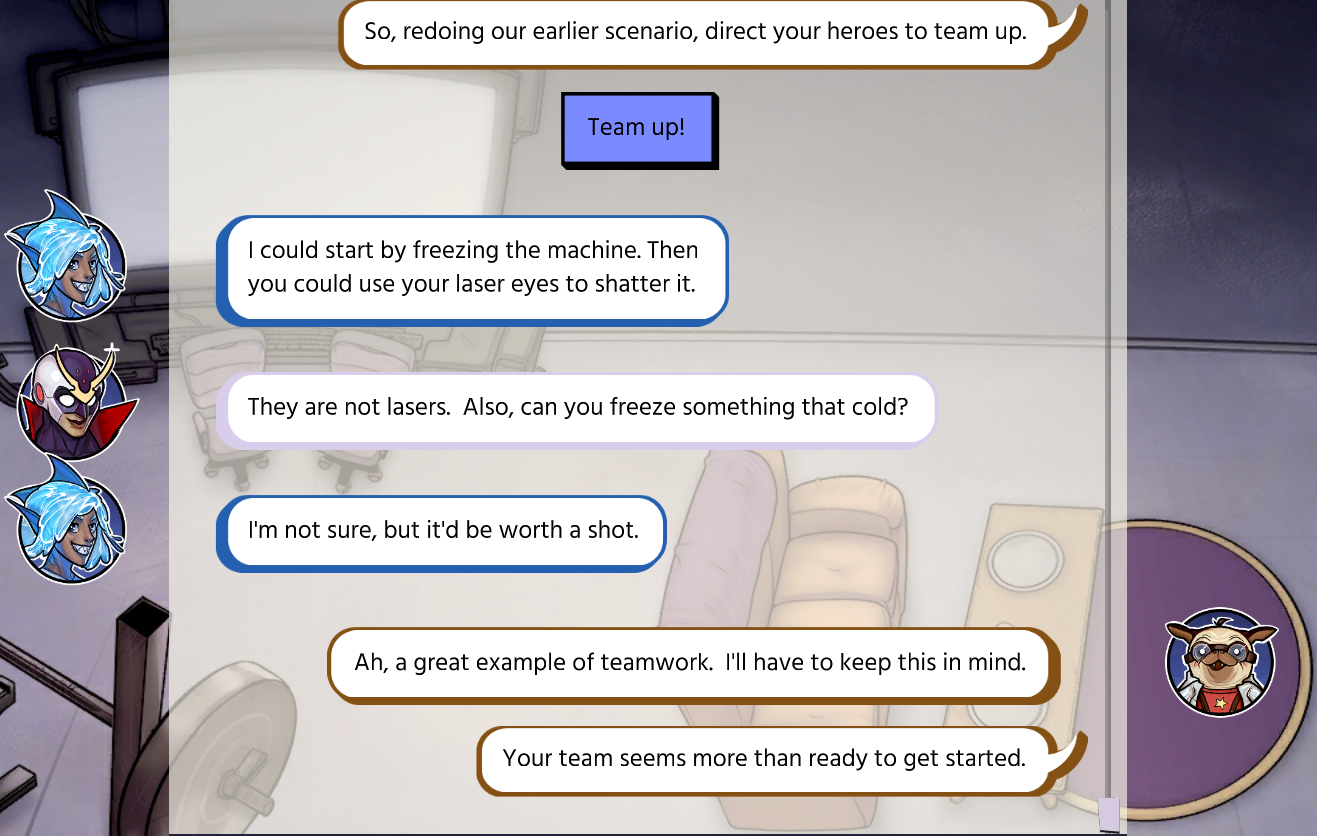 Gotta say, it's a little weird and pretty disappointing that neither of the points above were caught by your sensitivity readers.

Great game, very cute, very Queer, but it would've been remiss of me not to give feedback on those snags.
Means I have to caveat recommendations a little, which I wish I didn't have to.

You'll want to keep an eye out for instances in which you've gendered the player in dialogue then.
At the very least, there's a lot of "guy" in there.

I completed the Alien Derelict with no problems. 3/3 levels cleared.
I moved on to the Robot Derelict, only for completion of the first level to result in 4/3 levels cleared and that mission terminating.

At which point I also discovered that my entire team now has Scout equipment like my Commander instead of their actual equipment.
(Closing and reopening does nothing to fix this.)

Going to see if I can't back up the save file, start a fresh one with the relevant classes, & copy their equipment over to correct the original.
Seems like that should work, though I'm not sure whether I can fix the level completion bug in a similar fashion.

That would depend on the controller & OS.
If it's an Xbox One controller on Windows 10, you should be able to disable it on a system-wide level by using the Xbox Accessories app from the Windows Store.

Found a weird bug in Level 4-2.
When one of the walls goes down, it seems like all my comrades want to hang around punching rubble instead of carrying on with the revolution. 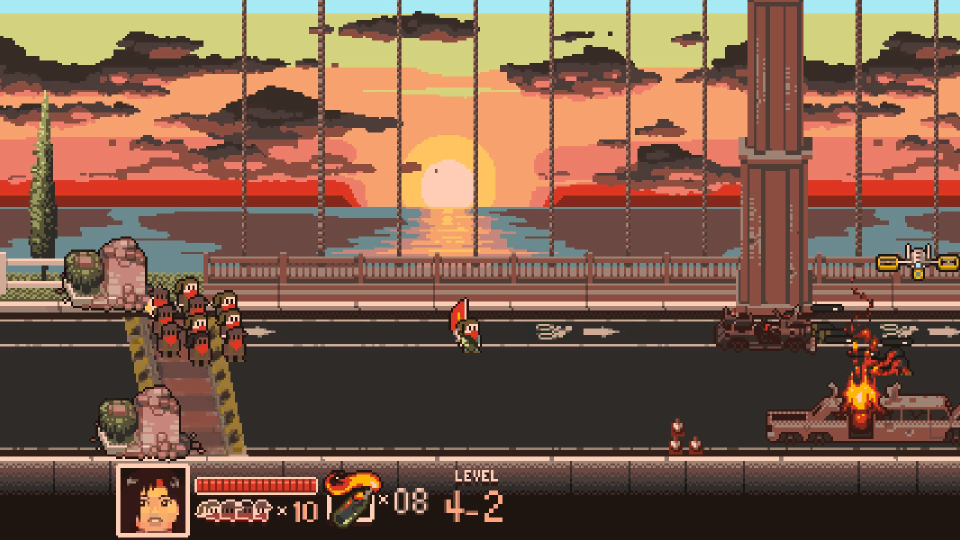 Even trying to move ahead & point the way, they try desperately to sprint their way back to punching rubble.

Maybe hop off your own dick for five minutes, & extract your head from your arse while you're at it.

Likewise doesn't show up in searches for me either.
Something's gone wrong somewhere.

Why is the volume of that godawful clicking on mouseover not modified by literally any of the settings?
This is why a 'Master' volume control is important for UX/UI accessibility.

On an unrelated note, I find it very weird and annoying that we can colour hair and skin but not clothing.
(And what is that not-quite-a-dress option? Are they wearing an apron?)
I can see the clear intention of aiming for an androgynous look, but it really does lean heavily on the 'andro-' side, & it's difficult to counterbalance that with the extremely limited hairstyle and clothing options.

I do want to like this game, but immediately being hit with an irritating UX/UI issue and an inability to create the kind of character I would like to create is... not instilling enthusiasm.

Reply
BEACON community · Replied to monothetic in Accessibility or is it just me?
CyberneticSusurrus2 years ago

I would also add that some areas in certain levels are very bright and have poor contrast.
Bright enough that it becomes uncomfortable to look at and difficult to discern anything in.

I've noticed it primarily in the goo/lava/energy zones, so perhaps the solution is dialing down the intensity of the effects on those.
Relevant UI options might also help.

Cut-Me-Own-Throat Dibbler would be proud.

Well, the demo is a demo.
The Patreon version receives regular updates.

Same issue here. Which becomes a problem when some games don't want to load otherwise.

Having played the demo for a while, I'd like to give my thoughts on it:

The text can be incredibly difficult to read, particularly in the bestiary.
Please consider accessibility issues such as that.
It is absolutely worth sacrificing the '8-bit style' for functionality and clarity.

It also seems as though one must have weapons/armour in the gear wheel to equip them, despite that being where one would want to have useable items.
A dedicated 'equipment' page and/or wheel would be much appreciated, and a tremendous Quality of Life improvement.

Otherwise, the core gameplay definitely appeals.
Collecting and raising creatures mixed with some classic RPG mechanics is a great mix. Just needs that extra care and polishing up in terms of UX/UI.