HIGH STAKES
DEAL ME IN, OH CHILD OF THE NIGHT
soldier sorrowful
Action
Play in browser

yo, sorry for not responding sooner; glad you enjoyed the game!

glad you enjoyed it! thanks for making such a rad cart

love the presentation and lore behind this entry, awesome stuff! if you still plan on developing it, i'd love to see where it goes

heya, i joined this jam as an opportunity to make my first actual game, consider checking it out! this jam was a lot of fun and i'm happy to have participated in it! :)

(Edit 10/14/20: i've encountered a couple bugs upon letting another person test the game; they should be fixed by either tonight or tomorrow)

i had a similar idea regarding card games with the bosses, but i neither have the time nor ideas to fully develop it

i'd say my entry is more action oriented; i'm basing the core gameplay heavily on the sega genesis game bonanza bros. if you're unfamiliar, it's a game where you play as a thief who steals various treasures from various places under a certain amount of time. i've always wanted to see how well the game would scale to a 3d environment. how i've got it planned out is that you start off with a limited amount of ammo that doesn't replenish throughout the run. you can't kill enemies, but you can stun them for a bit, making the collection process ever so easier. at the end of the game, you'll receive a time bonus depending on how much ammo you had left, so there's a strategic element to ammo conservation if you wanna make certain levels easier/get a better time.

i've had plot stuff in the back of my mind, as i'd like to flesh out the game after the jam period, although i'm uncertain if it'll happen.

i like what you're planning with your entry though, would love to see where it goes. as for any sort of recommendations, maybe you could add a stealth mechanic to the game? you could get extra information by eavesdropping, access secret rooms, etc

i'm usin this famicase as a theme aswell. i've got a good bit done on my entry, although i'm uncertain if i'll be able to get it out in time, haha. most of the work ive done on my entry has been a learning experience, so i'm still confused on a few things

I've been interested in getting this since I'm usually bad at making my own models from scratch, but would it be any good at making rigged models? (e.g: humanoid models)

I installed Sprytile on a different computer running the same version of Blender on this computer, and it works just fine. Maybe Blender didn't install correctly?

I tried everything you said above, but the tileset still doesn't display right. My settings seem to be the same as yours.  I found a temporary fix where you set the objects viewport shading to rendered. It displays correctly, but the grid is disabled and editing is a bit slow. 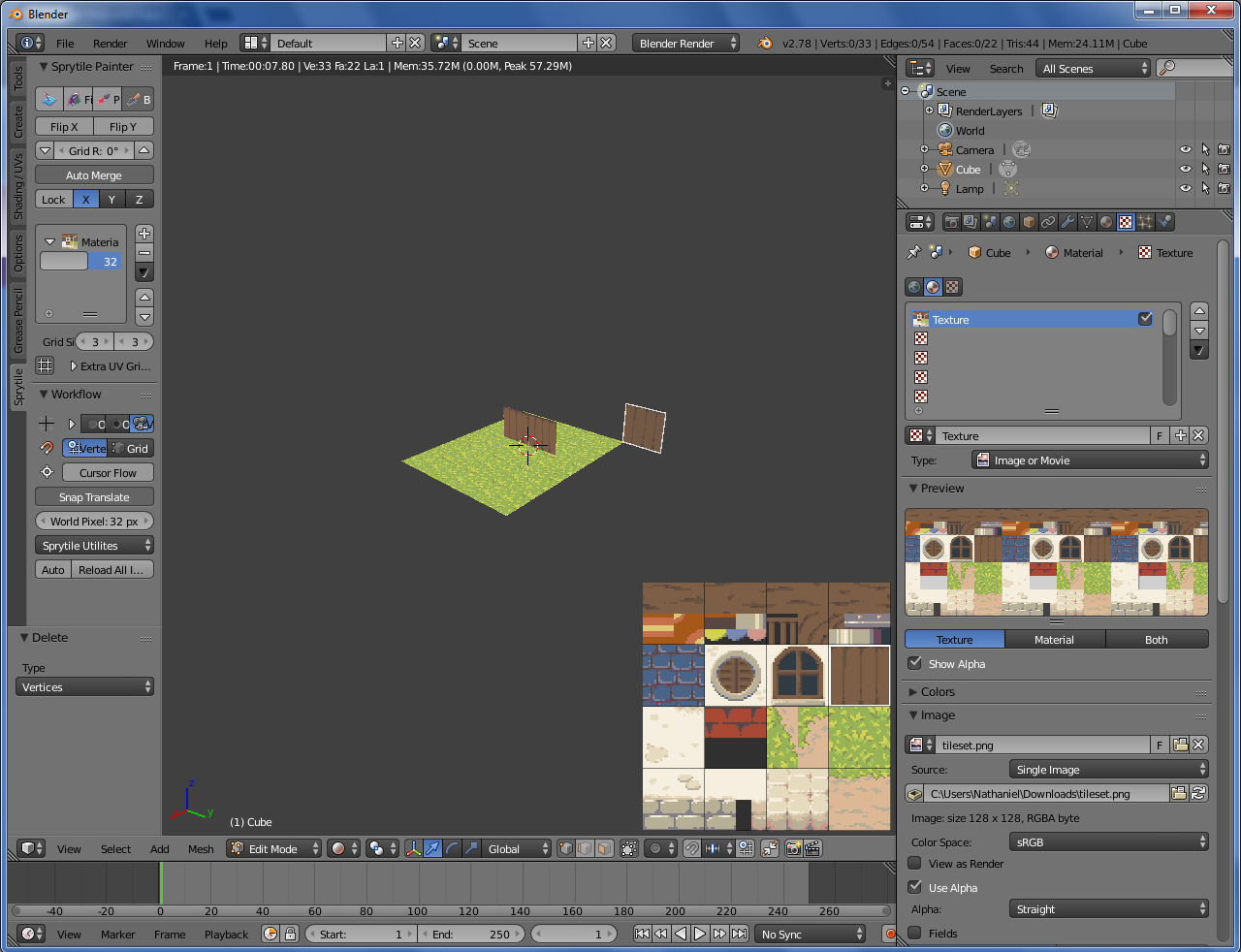 I'm not really sure what the problem is.

Thanks for the help!

Whenever I try to create something using Sprytile, it displays an orange color instead of the tileset I'm using. 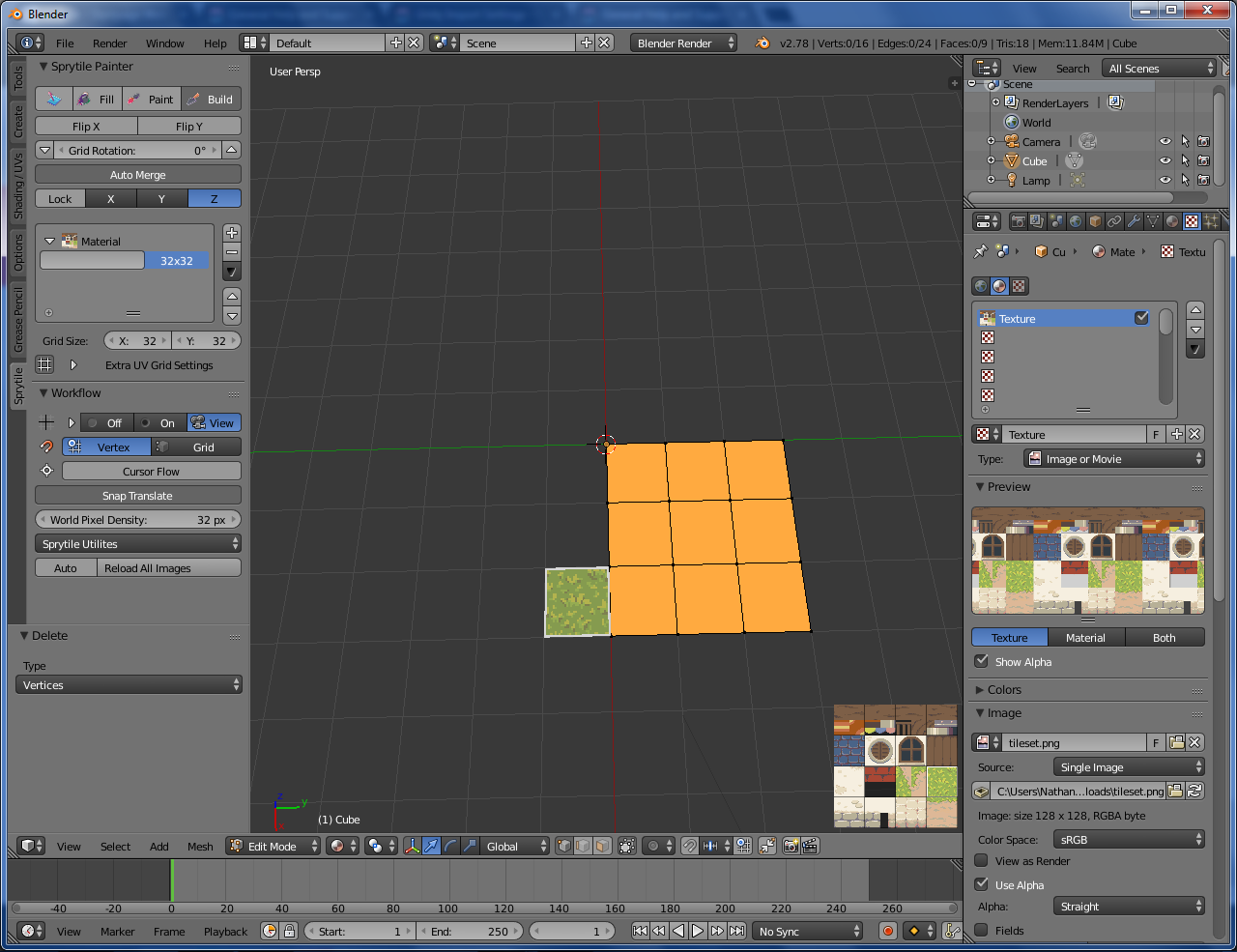 However, if I render it, the tileset shows up like normal. 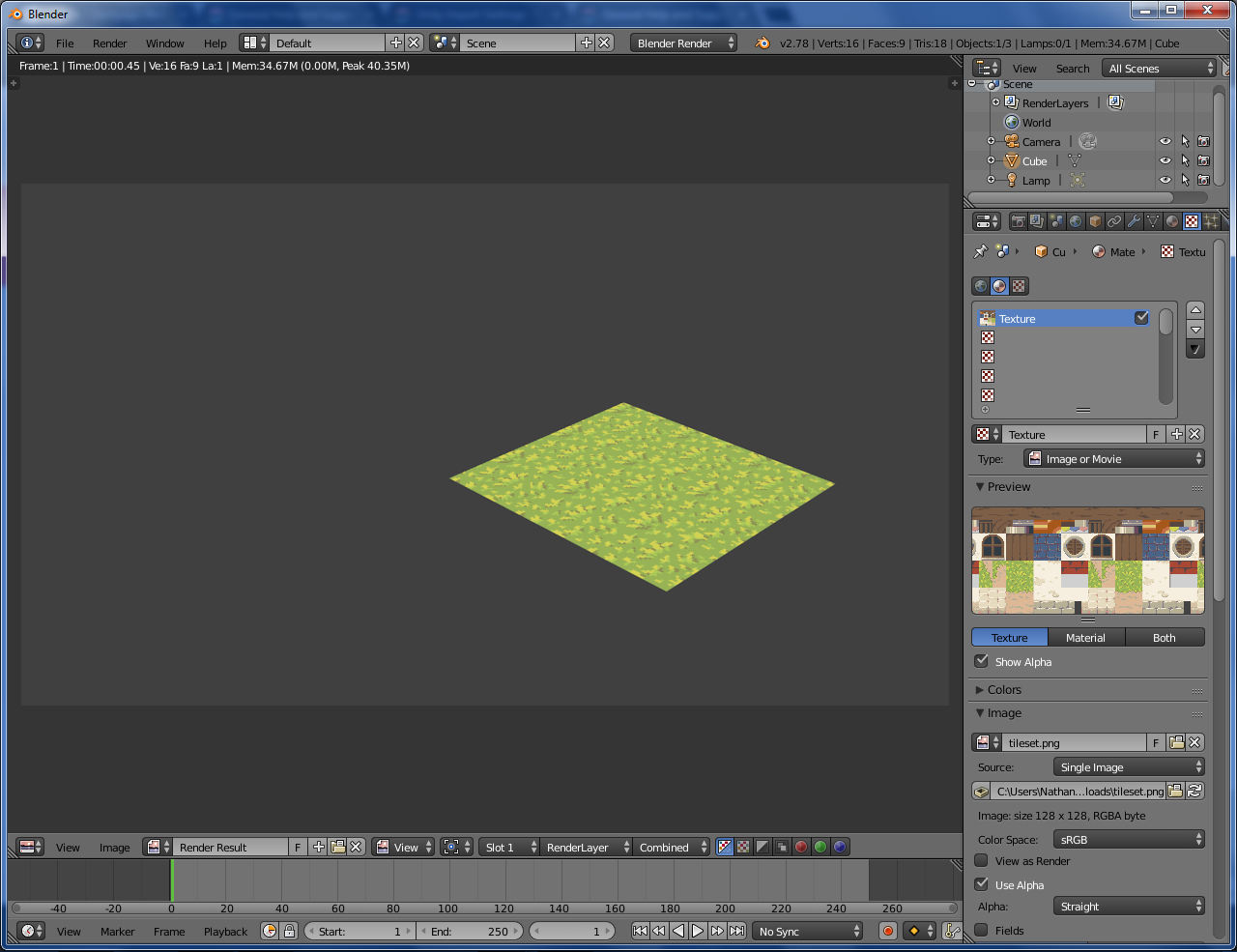 I'm still learning the ins and outs of Blender, so it may just be a problem on how I set it up. Any help would be greatly appreciated!