Thanks, Glad you enjoyed it!

Were you using the web version?

Json files don't export to html, so the buttons just default to the error text. I unfortunately didn't catch that before exporting.

If you want the menu options in readable text, you can download the game instead (The .json files export with that, so the text is all fine)

A gameplay video will be uploaded within the next day or so. You can also use that as a guide to the text.

Sorry for the inconvenience!

TLDR; Web version didn't export the correct files, so everything is messed up on that build.

Okay that's exactly the issue XD. Apparently both my version of godot (fixed in a later version) and paint.net don't support kerning pairs!

Thanks for taking time to help me, and sorry for bothering you!

Okay, I will be sure too! Thanks!

(I saw in other community posts that you are mostly kept up do to the war in your country. Don't feel a need at all to check this out, focus on your personal health and other more important things instead.)

I decided to add kerning pair support to my primary game font, yet every time I export the font, it doesn't export with any kerning pairs at all!

This also applies to other fonts I make for game jams and other stuff.

(I'm pretty sure my stuff is alright, because It shows up in the font editor, yet not in any other software.)

In the Font Editor 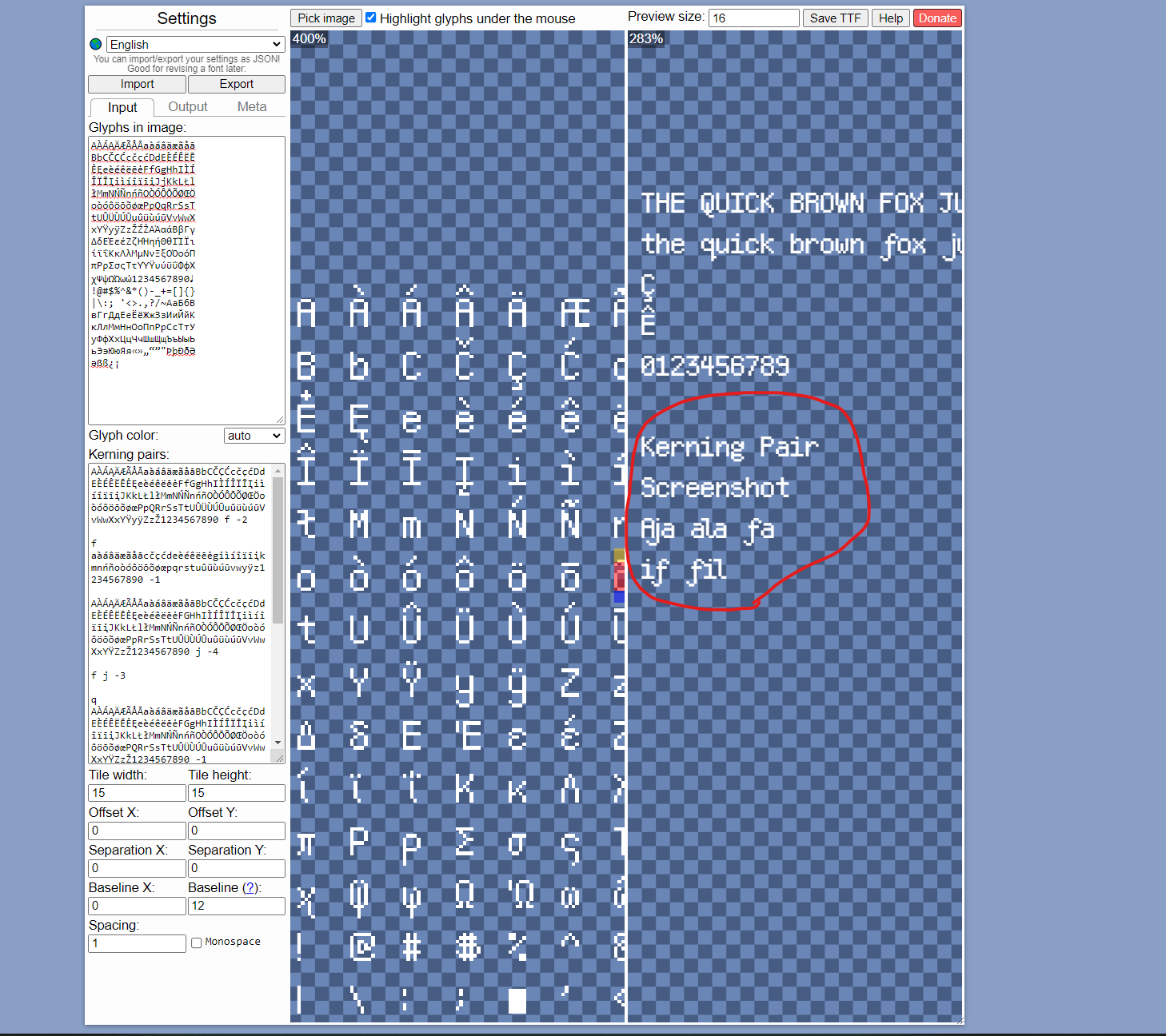 In My Game Engine of Choice (Godot) 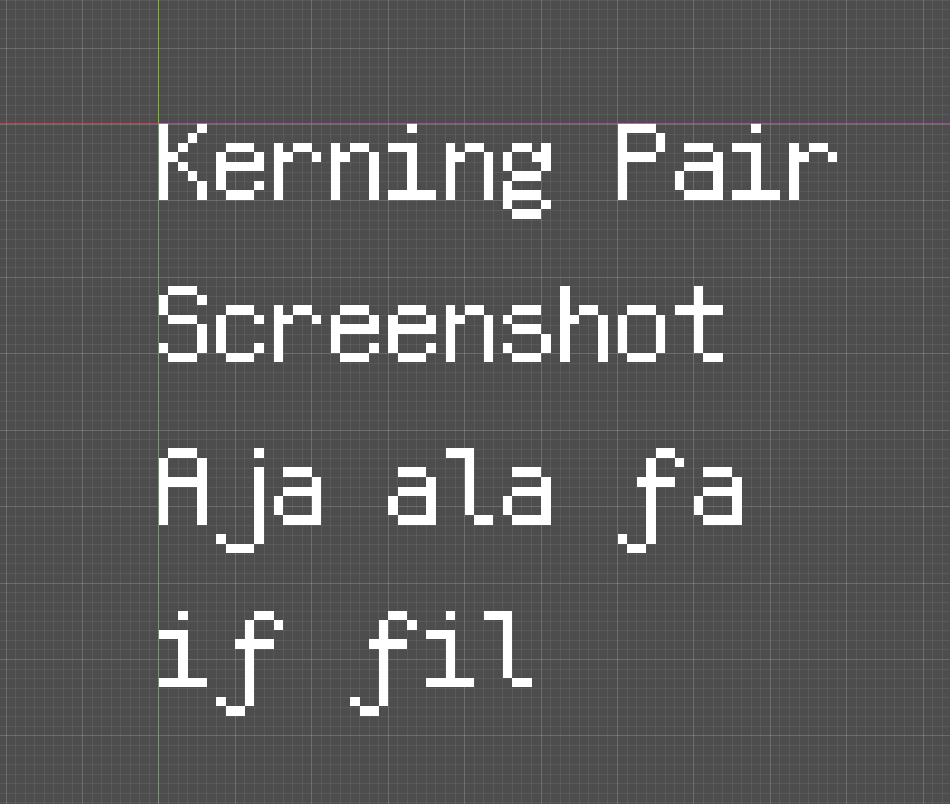 In Other Software (Paint.net) 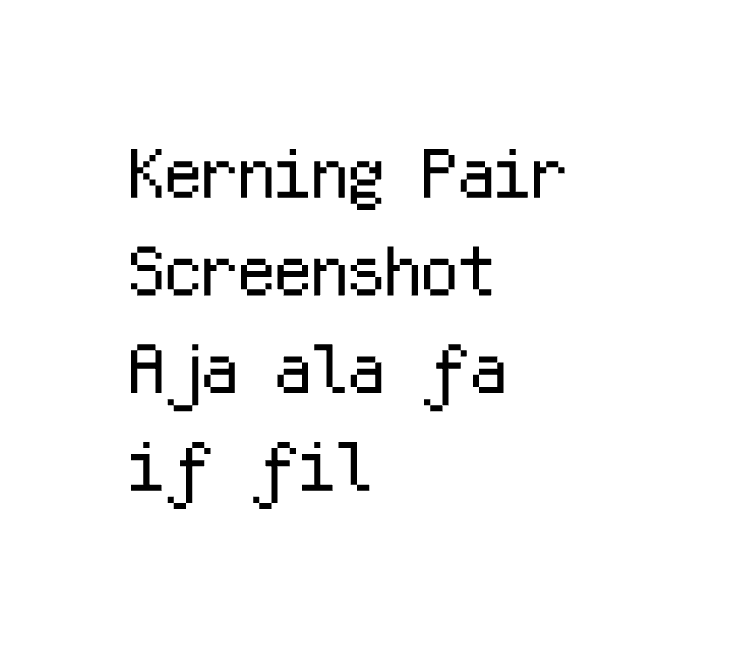 Here's the json if you want to see it.

The peak of the game's difficulty is (in my opinion) level 19, the game (for the most part) just gets more difficult from level one onward.

Thank you so much for all of the feedback!

Because of how I divided my development time, I spent the first two and a half days working on the engine, menus, graphics, and SFX. With only about 3 hours of development on the levels themselves. This is (unfortunately) painfully obvious, the levels are not very well designed, the difficulty spikes are insane, and there are so many issues (heck,  I didn't even have enough time at the end to fully playtest the game due to it's ludicrous difficulty.) But we learn from our mistakes, and I think I see improvement in each of my jam games!

Now to go into your actual points of criticism,

I intended to have more varied enemies, with unique bullet patterns amongst them, but I ran out of time to make that. It would have definitely made the game better though.

The cursor having a thicker outline makes so much sense in hindsight, but I never thought about it during the development time. A definite improvement for the fixed release!

Enemy health bars is a feature I considered, but I intentionally didn't implement (as a game-design choice, instead of a time thing.) However, I can't remember for the life of me why I didn't, it would have been better there. Again, a definite improvement for the fixed release.

Thank you very much for all of your criticism regarding my game and the choices made, I really appreciate people being able to point out the things you as the developer don't notice in the game! Again, thank you for your criticism and I'm glad you enjoyed it!

I will probably come back and fix the game-breaking bugs (When the voting time is over,) but besides that I have no plans to change anything nor expand on the game at all at the moment.

But I'm glad you enjoyed the game anyways!

Yeah, the difficulty wasn't tested at all, I could have done a lot better, but I'm glad you enjoyed what we have anyways!

Nice, glad you enjoyed it!

Thanks! The concept wasn't thought out enough. And you borderline have to take damage sometimes. I suppose that's what you get for leaving the gameplay for last XD. But either way, thanks for your feedback!

Thank you very much for your feedback, and I'm glad you enjoyed it!

The sticky jump feedback is something I get on pretty much every platformer I make, so adding coyote time to jumps is a must for future jam projects.

And I tried to add a warning not to mistake the stalagmites / stalactites for spikes, but I do agree that I should have designed them differently. If I were to redesign them, I would add a dithering effect to make them less visible.

Again, thank you for your feedback and I'm glad you enjoyed the game!

Thanks, I appreciate knowing that the warnings helped at least someone!

Yeah, In order to get a half pixelated, half smooth effect, I had to render the game in two separate viewports, and this screwed with the mouse tracking, so I couldn't make the mouse work for twins stick controls. And to keep them consistent, I did the same for the controller controls. Thanks for the feedback!

And again I totally agree that the shooting is a bit rough, but that's just how it goes!

Thanks! I worked hard on the UI, so I'm glad you appreciate it.

I'm not sure about the drift, I had dropped my controller before playing by accident (butterfingers I know XD) so that's part of it, I played hollow knight afterwards though and nothing seemed amiss, so I'm not sure. The sfx were great btw, and I guessed that the music was from an asset pack, but I would have liked to have seen some original music (I'm no composer, so I totally understand!) And about the portraits, I also totally get it, game jams do be like that! Again thanks for the feedback, and sorry I couldn't get back to you sooner!

I see. Well, I've done story based themes before and they don't work too well. But you at least had the theme in mind, which is great! Especially since it was a difficult theme!

This is probably my favorite game on this jam as of yet. The ghost switching mechanic was super creative and fun, the bosses never felt too hard, and I managed to beat the whole game! The visuals were simple, and effective, especially in the backgrounds! The audio was fitting and great, the only reason it wasn't a five is because the sounds were from preexisting packs.

I experienced some major controller drift while playing, so I switched to keyboard and it went away, so I'm going to chock that up to my controller. The character portraits were really similar, and it's obvious that they were all based on one portrait, so some more variety would be welcome. The ending felt a little more sudden, maybe some graphical cutscene would be nice to complement the dialogue?

Overall this is a fantastic entry, very approachable, very fun, good looking, and sounds great, you all did a fantastic job!

This game surprised me, it managed to combine a visual novel and a bullet hell!

It isn't really clear what the bullets do, I guessed the red ones are good and the blue ones are bad, and one of the main attacks is undodgeable (due to being really rng based) and there are only around two attacks in the whole game? A little more variety would have been nice, but what we have is good. Also there isn't really a consequence for getting hit, as you can regain your lost health by just hitting red. And again, the theme incorporation could have been more creative.

Over it's a solid entry, could use some more polish but it isn't bad at all, and combining two near-incompatible genres is impressive, overall great job!

The game was good! It felt very TouHou like, it was really hard, I got to the first (or final) boss and couldn't beat it (I'm not good at video games.)

Overall this game was good, simple graphics and gameplay. Shame that there wasn't any sound, and I mentioned my thoughts on the theme above. Good job!

The game was good! It felt very TouHou like, it was really hard, I got to the first (or final) boss and couldn't beat it (I'm not good at video games.)

Overall this game was good, simple graphics and gameplay. Shame that there wasn't any sound, and I mentioned my thoughts on the theme above. Good job!

This game blew me away with it's graphics. Its music is very well done too.

The theme could have been more creative (but who am I kidding I did pretty bad on that too) as it's just a smaller arena. In terms of approachability the game is quite hard (or I'm just that bad at bullet hells) and the phases are great the first few attempts, but after awhile they kind of drag on due to low player damage or high boss health, I never made it beyond the second phase.

But the gameplay is very fun, it's simple and well done!

Even though I seemed harsh, I truly loved the game, and it impressed me a lot!

Hey thanks! I'm glad you enjoyed it!

Appreciated the complements on the player sprite, I'm proud of how it turned out.

Woah, I wasn't expecting a full 3d game in this jam! It was cool, unfortunately due to the colors, I couldn't understand what was going on half the time. But a cool game nonetheless!

Amazing, this is the best game I've seen for this jam, the amount of polish here is insane. This is definitely the closest game I've seen so far that comes close to potentially being a full game! My only minor gripe is the difficulty, but I'm not a gamer, so that's probably a me problem.

Very pretty platformer. I found the lighting effects to be beautiful, and the light puzzle-like nature to be very fun! If I had to change anything, I would use Z instead of X to jump (tripped me up a few times), but other than that, great game!

This is a very charming, short 'n' sweet little beat-em-up. I thought the dodge mechanic was well done, and the graphics were very nice with the 3d effect (the screen resolution was probably a little too small for the 3d effect, but what can you do with a Nokia phone?) My only real criticism (if any), is that the played health bar appears to use subpixels? If so it was probably unintentional, so it doesn't really matter. Still, a very solid entry!

It's a nicely made infinite runner, it really feels like it could actually be on a real Nokia phone!

Yeah, I didn't think about capsule colliders and I think coyote time, they would have definitely made the game better though. Thanks for your feedback, and I'm glad you enjoyed the game!

Haha, glad you liked it!

Should have probably made that more obvious... sorry!

If you need really need want to, you can open the project file from the "Assets and Project File" and run it from the Godot engine

What OS are you using?

Thanks. I don't necessarily think that I don't like this project, it's just that I think I could have been smarter with handling scope and getting the story mode finished. But again, thank you for your kind words!