is it normal that I was able to buy the tonus macaronus even though I'd already bought the chalk from the vending machine, and wound up at a total of negative 99 cents?

minor bug report -- the sphinx cat keychains in the Warm Subject get an eye icon like they're interactable, but nothing happens when you do.

Any time I pour a bucket into the blender, my bucket disappears?  Is this a bug?

While I'm at it -- the game that was about to end (or not, depending on how the shake went) is now just lost to time, rather than getting to show up on the high scores...  have you thought about having an autosave while playing, in case of crashes, rather than just on exit?

New bug report -- I just had the game crash upon doing the shake.  It gave me the 'blocks falling down' screen, but pressing B didn't do anything unfortunately...

I know about down to cancel; that wouldn't have helped here -- I was holding on purpose, but the playdate dropped an input or something, and treated it like a press instead.

Have you considered any alternate control schemes?  I just lost a 77 streak because the buttons decided that I briefly released my hold, I guess...

So far, I've gotten it to freeze/softlock three times this morning (by trying deliberately), but none of them have produced an actual crash, just the situation where the controls stop responding (except for the home button).

I'll let you know if I can ever produce a crash log, but in the meantime, reproducing the freeze seems to be very easy -- the only tricky part is that I believe you have to luck into a 3+ auto-combo, and you have to be hammering the A button on a row that actually has room to move, AND, sometimes the freeze doesn't happen until the NEXT time you clear blocks AFTER that, which might be several moves later.

The new update is gorgeous!  Two bits of feedback though:

1) Pressing the d-pad quickly enough actually makes the cursor not move, sometimes?  Like, it can move at a high speed, but then it just stops for a beat for no reason.  It definitely didn't have this problem before the update; my muscle memory keeps getting startled. You can reproduce this just by pressing a d-pad direction fairly rapidly and noticing the unsteady rhythm (it seems to be roughly 1 in every 4 moves, but it doesn't always hesitate at the edges, sometimes it hesitates in the middle.)

2) I tried jamming the A button during an auto-move, to test the new build, and it seemed to be fine at first, but then on the next move, the entire playdate crashed and needed to be rebooted!  After rebooting I tried again, and this time the game just softlocked, it no longer accepts input other than the home button -- going home and relaunching fixed it, but it also didn't save my progress, I had to restart from zero.

The second one is still just something that only happens when I'm reproduce it on purpose so far, though I am worried that I'm going to trigger it accidentally when I don't realise an auto-move is coming (which is how I ran into the bugs I reported in the last version)...   The first one is much less harmful of course, but it is fairly distracting while I'm playing because I'm running into it almost constantly.

I do want to clarify -- I'm not certain I have those steps right, that's just how it seems to happen.  I'll check back in if I have something that reproduces it for sure.

It seems like it happens after the second step of a multiple automatic thing, like,
1. I make a move
2. some pieces clear
3. more pieces appear
4. those pieces clear
5. now I can move the cursor and move pieces
6. the pieces that should have appeared after step 4, appear, but I'm already moving around and changing things

I'm trying to avoid doing this for now because I'm in the middle of a nice run, but if I wind up game-overing I'll start a run just for fun and see if I can get video or something

I'm not sure what Mirror is?

I took six screenshots of it in the past week or so before I stopped bothering screenshotting it.

Also, sometimes it seems like I can make a move WHILE automatic things are still happening -- is that intentional?

Are you aware of the bug where sometimes the board will sit and wait for you to make a move even though there's already four pieces lined up?

(It only happens when they spawn in that way, never after a move of mine -- and the next time I make a move, they disappear, even if the move didn't touch them at all.)

Loving this game!  I'm finding myself wishing I had it on my phone too, for when the Playdate isn't convenient -- have you considered an Android port?

This page says "the Read Me has control instructions", but I don't see a readme in my download?

One more tiny possible bug report: is it intentional that Medina says "I didn't even know cats could eat cat food"?

Yep, I eventually noticed it there :) I'd missed it the first time... Good to know, thanks!

.......never mind the never mind. I'd quit it again to write THAT previous comment, and when I launched back in it was a pool ball again. At least I can keep trying until it's back what it should be for now though!

minor bug report: I saved and quit with the bowling ball in my inventory, and when I loaded it back up, I had a pool ball instead? Just worried this means I've accidentally been skipped past some sequence of events I could've seen, or something...

Is there any way to calibrate the timing (or at least make the timing window more generous)? This game really seems to have pretty bad input lag that other games don't on this same machine...

What a fantastic experience. The puzzles are way too hard for me, so thank you for including 'exploration' mode, I'd hate to have missed this :) Honestly gives me a fuzzy feeling of queer community...

One minor bug report: the puzzle "U-TURN" is the only place in the game I've found where you can blow a hole through a wall and leave the screen, but the screen doesn't scroll; you're just trapped off-screen.

OK yep according to this I had a straight, and I thought she had a random hand, but now I'm wondering if it might have been a flush (I didn't realise that was a thing on its own, I thought it could only improve straights). I'll come back if I spot anything in the future!

Maybe a silly question, but: does anyone know a good guide to the rules of poker? I kind of know them, but I just had what I thought was a good hand, and I wound up losing to a hand that I didn't see anything in, and now I'm not sure whether it was a bug or whether I just don't know how this kind of poker works...

The update fixed it for me, thanks :)

Same here, I was waiting for some dialogue about "well let me get some clothes on so I can strip them off again" or something, but they just went right into the game without acknowledging it, so I guess it's a bug?

Oh, one other thing -- it seems that the game is set up so that the Itch client runs the installer every time you play?

Heads-up on a technical issue: I have a 16:10 monitor, and when I play the Windows version, the sides of the interface are cut off: https://imgur.com/a/3TMFZov

I'll work around it by changing my desktop resolution for the moment, but it would be nice if the game could accommodate it :)

ohhhh, wow, that changes everything!! I was having such a hard time getting rid of

arrangements, trying to extend them to either side...

Is there somewhere that documents this, or do most people just find it out naturally?

So I've noticed that when three blocks of the same type line up in a straight line, they explode; but I'd swear I've also seen groups of five like...

...all explode at the same time, even though explosions don't otherwise spread to adjacent similar-colored blocks like that. Is there another rule that makes them explode? (Also: is there a readme or help screen that I've overlooked that explains this?)

Is anything supposed to happen when you reach the counter? (It stops accepting input, but nothing else happens, besides sneezing)

It's a little hard to demo in a screenshot, since libfive doesn't have any kind of visualization of transform nodes (besides their results), but:

Depending on the radius and strength, it can either pull out a little pinch of a shape... 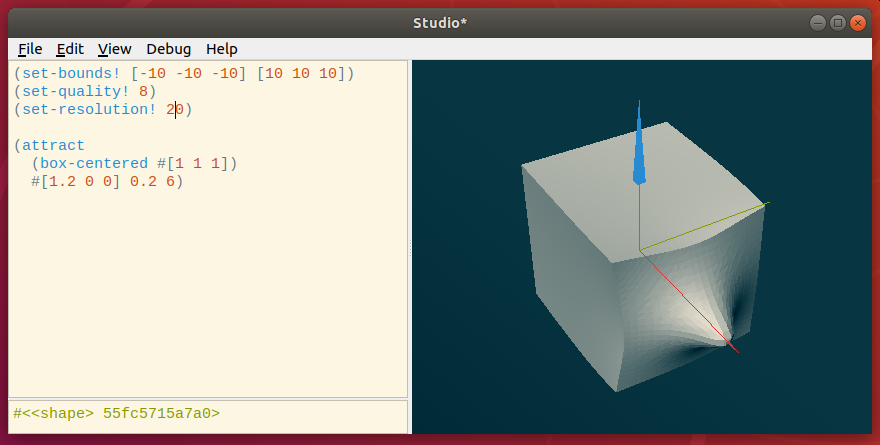 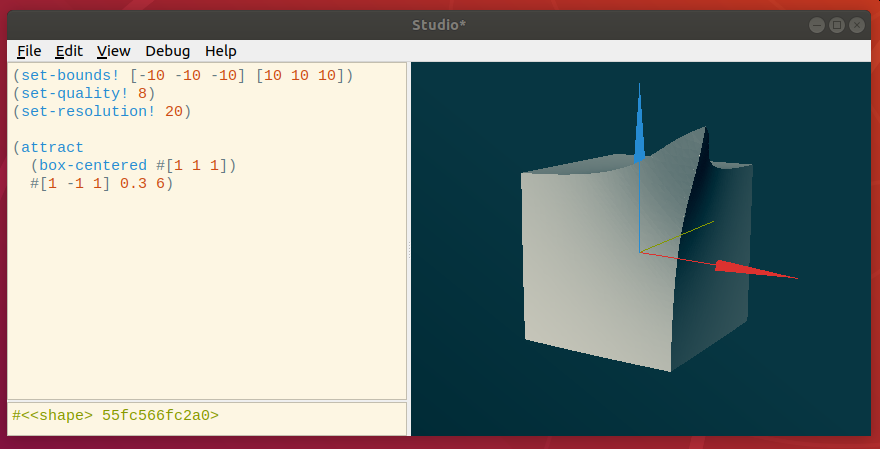 or lean a whole shape towards it in a stretchy way: 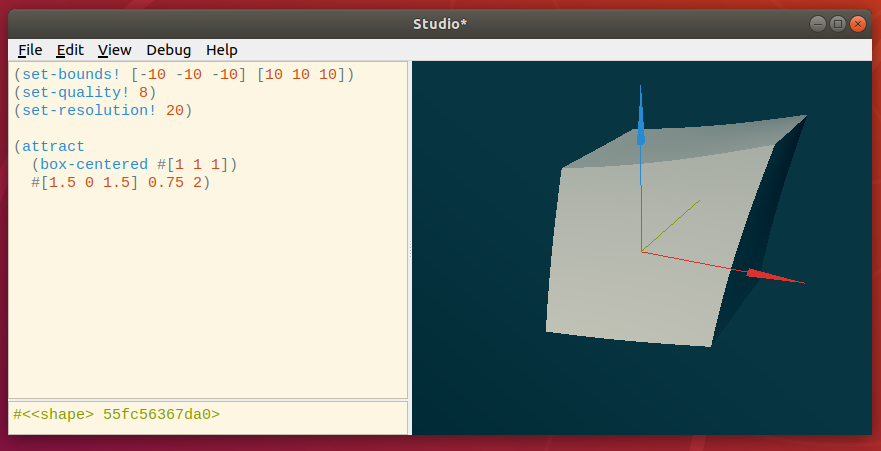 It's what really gives SDFs that "clay" feeling for me; being able to take a sphere, but then smoosh and pull it a little into another shape, or just give the final shape a bit of a curving bend to 'pose' it...

and of course other domain transformations like 'twirl' give a nice way to make some more ornamental kinds of shapes: 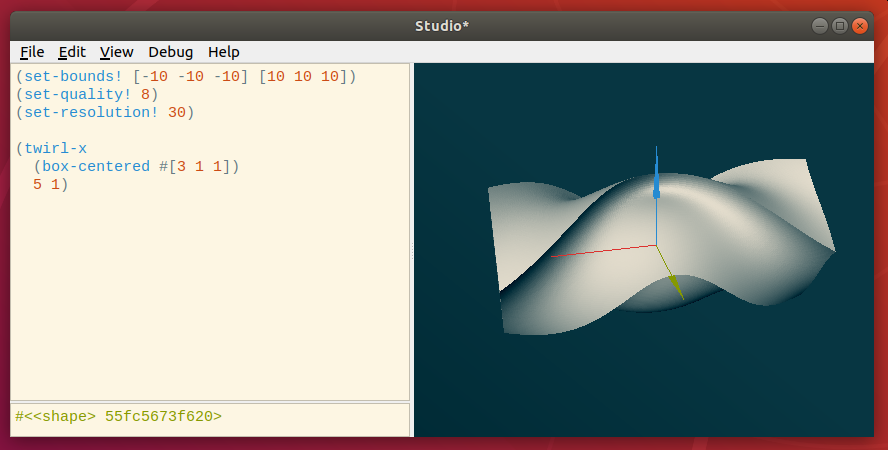 One of my favourite transforms that I discovered in libfive is the attract/repel transform: https://github.com/libfive/libfive/blob/master/libfive/bind/transforms.scm#L190

Would it be possible to implement something like this, or like the "deformations and distortions" listed here? https://iquilezles.org/www/articles/distfunctions/distfunctions.htm

I looked in claySDF.compute, but it looks like that only covers determining an individual shape's SDF, not making changes to the calculated points that get passed on to subsequent shapes; I guess that would be happening in the obfuscated file?

alternately, even just giving more time to react would help a lot probably

so not to be picky but have you considered having checkpoints for that final encounter, because I don't think I can handle repeating the entire thing over and over again for how ever many more dozen attempts it's going to wind up taking me to get through it

I think I'm stumped; can I ask for some hints? I have the deluxe magical boots, an eye-shaped gem, 6 tablets (though I have no idea what they're for), I've made the chameleon potion (and used it for something), and the invisibility potion (which I haven't found a use for). There's one mysterious room near the beginning of the game that I haven't found a use for, and another room with a glittering barrier that hasn't yielded to any of my ideas for how to cross it...

I'm not sure how much more specific to get; are there any obvious things that I should be thinking about at this point in the game? (I've forgotten a few things that I've since rediscovered through wandering, but I've been wandering long enough now that I think I might actually be stumped...)