The big eyes and Unrealistic sci fi is the best - I really like watchin old sci fi to see how far technology has come - like in old Star trek they always take handheld device back to a more powerful computer. The idea of sending huge amounts of data wirelessly was unthinkable at the time.

Happy say this MyMyMyCornoa now works on Mobile and it gets more traffic than any other project.  :)

I Made a platformer "Banana Man 2" last month it turned out really fun - it now works with a Controller too - if u wanna check that out and hit me with some feedback that'd be awesome!  Im thinking about dedicating time to the BananaMan2 by ProjectPaddy (itch.io)

Banana Mans real name is "Chaos "., He is left-handed. After years of working in a Alcohol Factory and being exposed to Rasbery Radiation and  after falling into a Vat o f Banana Brandy, He blacked out and Became The Banana Man.

He was dreamed up last year for Brackeys Jam Last year. But I had a terrible Development cycle last year, I completely pivoted the project halfway through then My computer took a Duce During a Render.

There is a "fever-dream of a story somewhere in the game"   --- lol Like its Fruits Vs Veggies --- The King Carrot is trying to turn all the fruits into smoothies, But The Tomato's want to sacrifice themselves cuz (Tomatoes are really fruits) - But the King won't let them  cuz tomato smoothies r called sauces--- So The Tomato's go Rouge.

They Meet the Kiwi Kid that shows them the way out off the Vegetable aisle . Banana man Leads the Group out of King Carrots Aisle and into the rest of the store, making Friends finding new weapon and upgrades.

Im So happy My game could make you and others smile, that is why I make them! :)  I Also really wanted to get some sort of tutorial in the game or better Directions on the Games Page before the deadline too but sadly I ran out of time, even after I crunched all night. I will update the Game and Web Page after the Jams rating period is over.  Follow for updates - TY 4 playing Lilljona

:D Reading this made me so happy  - I didn't think I was going to get  "incredible" as a compliment :) thank you for playing  - this made my day

OMG TY so much - Im so happy you enjoyed playing :) I was totally going for surreal and bazar

Just submitted my 14th Game Jam Entry - Last year For Brackey's Game Jam I made Banana Man 1 and I had a terrible development cycle.

I changed the whole idea halfway through and then my GPU took a duce!

So this year, I wanted to revisit The Banana Man Idea. I rebuild the game from the bottom up over the week. Did a ton of art and code and audio to get this submitted on time.  It'd be kool if you'd check it out and give it a rating. I will most defiantly return the favor. 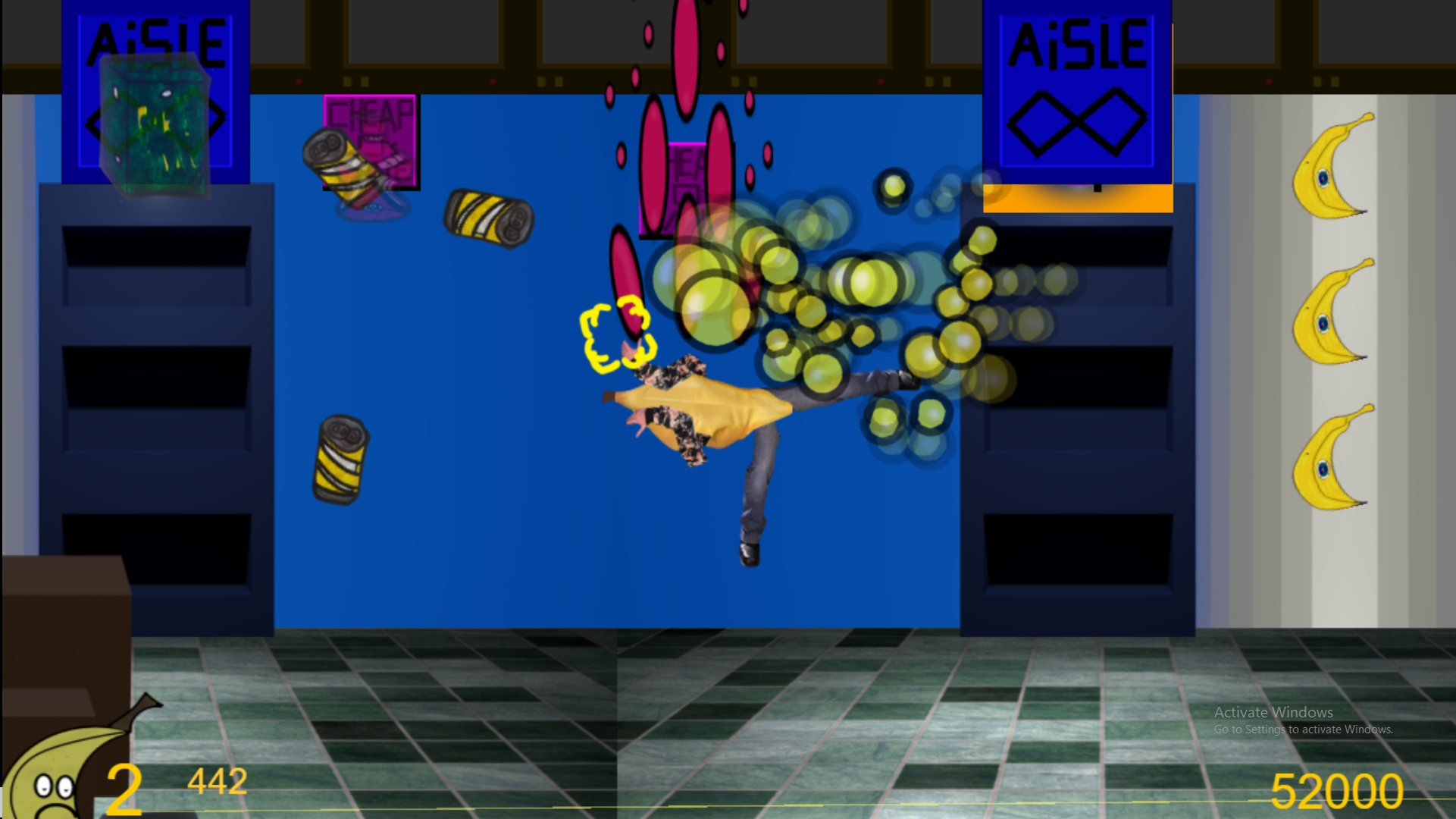 Reply
Brackeys Game Jam 2022.1 community · Posted in The only time I am putting invite link to GDC or Game Develop Community server
ProjectPaddy221 days ago

:) I joined ur server but originally, I thought it was GDC (Game Developers Conference) - watch allot of that on YouTube.

Reply
Brackeys Game Jam 2022.1 community · Posted in The only time I am putting invite link to GDC or Game Develop Community server
ProjectPaddy221 days ago (1 edit)

I watch a ton of GDC I am watching it now. Is this the real discord link? 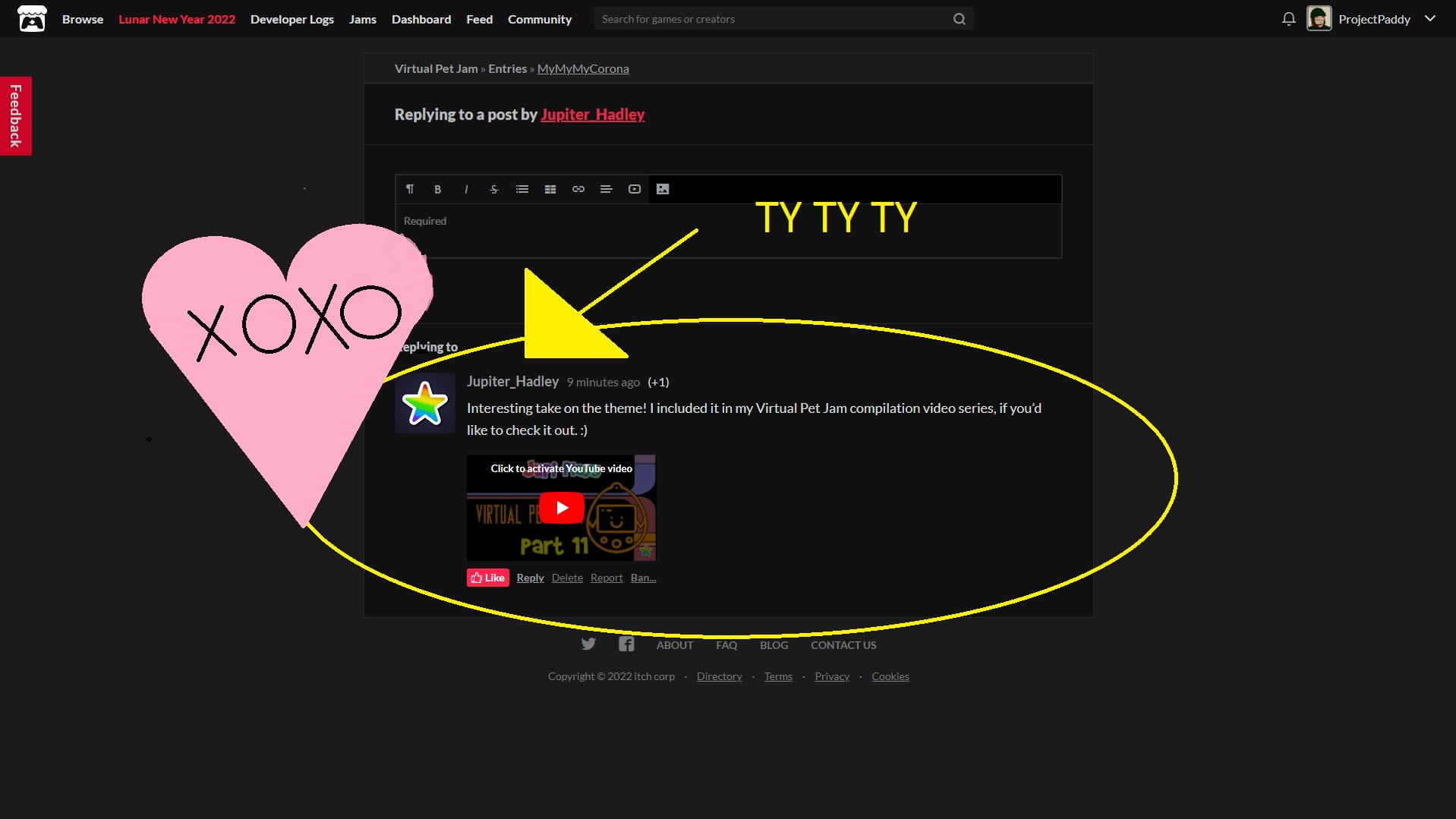 TY Jupiter :) super kool of u to play and review all the games. Thank you for spending ur energy to make these videos, I really like watching.

lol - No bro, I have no Idea about that series, I will look into the series for inspiration if I develop this "game" more.   I didn't know I made something reminiscent of another franchise. Thank you for pointing out the correlation between these two. I will look into it.

Please feel free to tell me more thoughts about your creative ideas for further development on this Project :)

I like the idea of a having to balance some kind of stats, so it's more like virtual pet.

and some sort of combo system to reward the player for multiple successful swipes.

"penalties" are a good idea too :) Thank you for the input :) 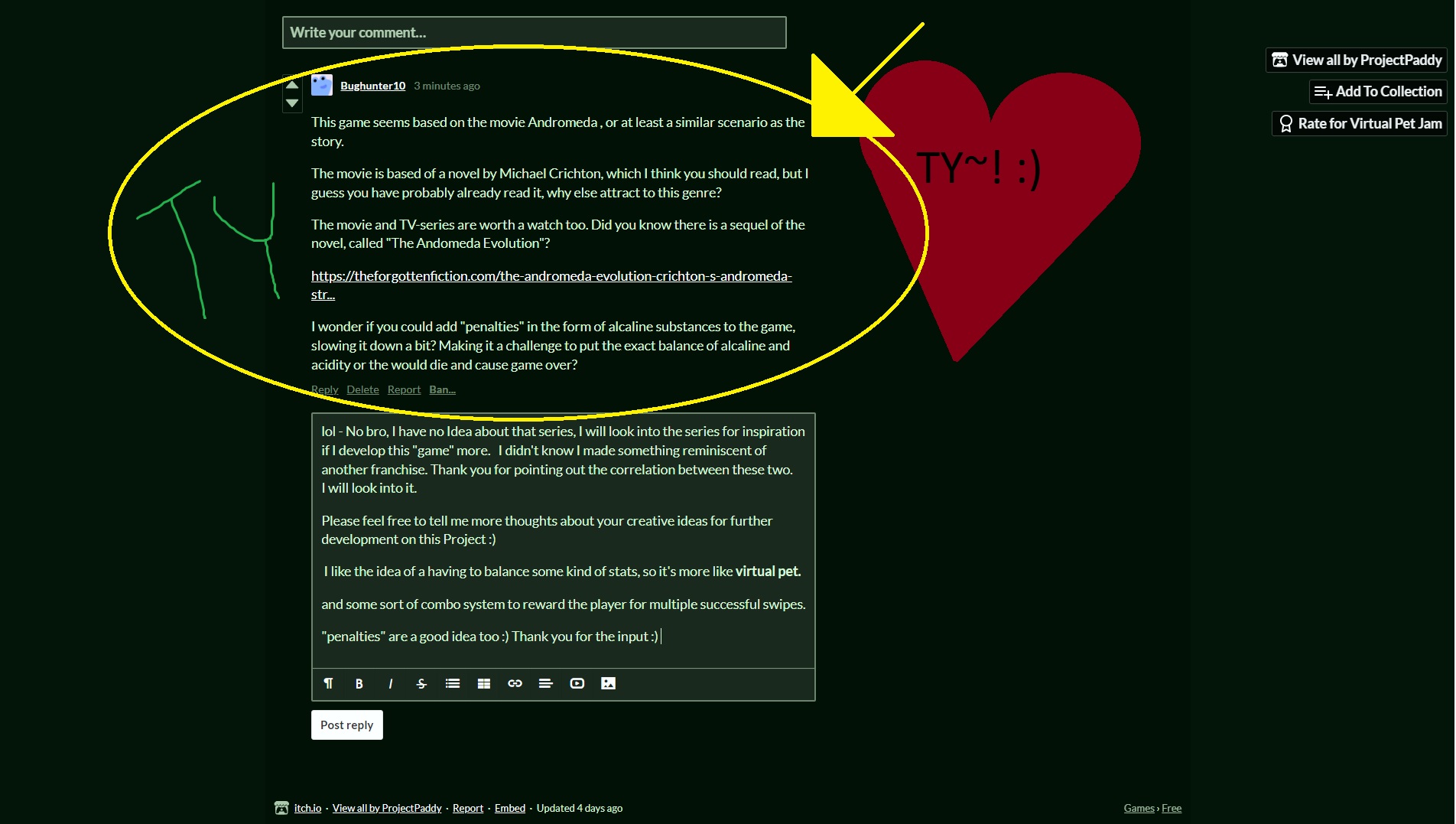 I really enjoyed this dude - I needed that text crawl in my life and didnt even know it- it is so true :) TY for sharing it was beautiful

This is just so gosh darn cute! TY for letting me play  :)

TY so much  :D for playing & the kind words

lol - I think they look like bell peppers too  TY~ for playing :)

United by are mutual hatred of apples

yeah I agree, the feedback on Hitting and being Hit needs to be fixed. I'd like to add Smoke and Dust when things get hit. All the flashing when bosses get hit can be distracting.  TYVM for playing :)

Thank you very very much for the kind words & Thank you so much for playing   :D  I like the Health Bar idea for bosses

I will keep enemy speed and adding a dash in mind more during future game jams. I'd like to play around with Invincibility Dashing.

I agree - I tryed to mitigate that problem. Should I try, adding a reticle that would follow the mouse around? Adding more size to bosses hitboxes or seprate hitboxes for collision? - I couldnt get Art on a reticle  to feel right. Also, Dashing  was the last Player feature added. It lacks balance. One of my playtesters requested Dashing be implemented, up until that point I never thought about it. Implementing a Dash lead to more movment problem to fix and a final boss to rush to get finished.  I think everyone will have a diffrent experience due to preferences of keyboard and mouse~ TYVM for playing

Ill have to play more Gears of War form an opinion. Ill look more into the "active reload" system in Gears of War for inspiration. TY for bring it my attention, it looks like a fun game.

I would have liked a fully automatic gun also. I found ~It would have been like giving a player a Nucula bomb - It would have been the only weapon they used & hard to balance damage from other sources. Reloading can be an important part of gameplay.  Auto Shooting can be fun - but you dont need to even hold a button down for auto shooting. I experiment with bullets continuing to fire after letting go of the mouse buttons. But ~ the idea was cut for burst fire or a semi automatic type of fire rate.  TYVM for playing :)

It was fun to edit the orginal songs in Auducity, in a way the the file size would be small and the music loops cohesive. - I had to find better ways to do audio making this project, due to the lots of sounds & sprites on screen at the same time.  TY for enjoying the music & TYVM for playing

I turned the last bosses health down dramatically. I did have time to balance for difficulty.  I struggled with my final decision on the doors too  -  Originally, I wanted the last boss to be able to take more damage. That way the Player would be forced back down through the level, decressing the playable area. Also, squeezing the player back to the starting zone- and the End of the  Mechaveres - The doors are the real boss of the game lol ~TYVM for playing

Thank  you  :)  I have been trying harder to "finish" projects in the time give for game jams.  7-day jams seems to be best for me. This was a fun project to make over the week! :) TY for playing

Neat gameplay idea. The butterflies being blocks  placed on a grid was a great idea - But the floaty controls and hard screen transitions gave me some eye strain , it's probably  just me. The sprites and tile set looks nice. Good Job

Awesome!  got the boss down to 5 hp - took me 3 times dying before I realized I could jump and dash - Very fun  and engaging - the bosses fire patterns and rush to get ammo made for a tense atmosphere  that I enjoyed - avoiding incoming attacks felt like an MMO raid mechanic, felt good to have to be behind he pillars just slightly before incoming attacks. That was a good boss fight,  make more .

I dig it dude good job

Pretty cool - neat there was 2 phases - I enjoyed the simplicity of this game. TY ~ :D

Very FUN & enjoyable level design - good narrative and fun gameplay - I would have like the boss to be harder beacuse dashing around was fun & intuitive.

Very FUN & enjoyable level design - good narrative and fun gameplay - I would have like the boss to be harder beacuse dashing around was fun & intuitive.