Makes sense, double down on the strategic angle. It may make a better mode for the whole game! I'll give it a try when I get some time.  Thanks for the suggestion!

Thanks! I do plan to keep working on it for sure, but not sure it's destined for a commercial release. I'd rather get more people to play it by being free, at least for now.

Thanks for the error reports @dontnormally! I have some computer issues at the moment that have prevented working on the game, but hoping to get these bugs sorted out soon.

That's a ton of great info! Thanks Elodrai! Looking forward to digging into it more soon.

Thanks for the report! Looking into this at the moment. I think I have a consistent reproduction of it so hopefully will have a fix out sometime soon (probably next week).

I believe it is caused by combat passives on dying characters (like poison, stun, etc.). When a  lot of passives are in the game, it sometimes crashes at battle end or character death. I'm narrowing in on where the exact crash is but haven't quite got it yet. (I thought I'd fixed it in build 11, but it looks like it's still appearing).

Oh that's really bad. Do you typically press space bar to end turn or do you typically click the button? That might help me narrow down how it disappeared. If you exit you should be able to reload from the day before this fight and hopefully continue playing.

Thanks for pointing that out! I've added it in the "to fix" list!

BTW I like your idea about stacking giving additional options instead of replacing. Short term it won't work like that, but I'm going to think on if there's a cool way I can incorporate that idea into a future feature. Thanks!

Hahaha I totally know what caused your crash now! That's a clever strategy! Not working as intended unfortunately. When you remove the location it should remove the income. I think the income is very confused since it can't find its location anymore. Thanks for the extra info! Should definitely have that fixed by next patch.

If you run into a bug or crash, please tell me about it! I want to fix everything! Posting about it here is fine. Emailing me is better (porousnapkin@gmail.com). Posting about it on the Discord (https://discord.gg/6PwhsSE) is ideal.

Thanks! I very much appreciate anyone taking the time to play Pact and report any issues they see.

@mtarini I got up the save and load build https://porousnapkin.itch.io/pact/devlog/136447/pact-0010-save-and-load
I fixed a few more crashes I was able to track down. Would love to hear if this cleared up your problems!

In most cases I found that after crashing I could load my save file and continue playing without issue, so this should help you get past your error. Please tell me if that changes!

There's a spell in development that will target allies for shielding, but it's not out yet. Ice wall is only on self.

Good call on locations optionally having the dialog popup. I'm trying to figure out if there's a good flow for it. One approach I'm taking now is trying to make a lot of locations either exhaust or change states so they either don't show the popup again or show a different one. Will keep exploring this.

Thanks also for the bug reports! Got em in the log and hope to have them fixed by the next patch.

@mtarini I got a new build up which fixed two crashes I was able to track down and a soft lock. Hoping it fixes your issues. If you play it, please shoot me a message if it's still crashing the same way. It is up here: https://porousnapkin.itch.io/pact/devlog/134437/pact-009-qol-features-and-bug-fixes

I'm starting next week's build focused on the save system, so hopefully that will help with tracking down and recovering from crashes if any are still occurring.

I think it's likely the crash with the incoming fix based on your playstyle (at least I hope!). I'll ping this topic when the next patch is up with the crash fix and would love to hear if it fixes it for you. Should either be tomorrow or Thursday.

That error message does not sound very helpful, so no need to send it. It's supposed to drop a stack trace, but I may have set that up wrong. I'll look into it.

Glad you're enjoying the core systems! The balance is definitely off now. It has teetered between incredibly hard and incredibly easy, but it'll get there! More content in the future will help with difficulty, like enemies that can target your back line or remove block. I'll probably make the demon hunter parties spawn more quickly in the short term to apply a bit more pressure.

I did just find a crash when you transform a location that is temporarily exhausted, the game crashes 5 days later. If that's what you were experiencing, a fix will be coming out in the next few days!

Thanks for the heads up! I haven't gotten a crash in my playtests. Any chance you get a popup that mentions unreal when it crashes? If so, I'd love it if you could take a screenshot of it and send it here.

You're the first person to report a crash so I could really use your help in tracking it down! (Although I do have a few soft-locks recorded I want to get fixed, nothing crash related yet.)

There is Only Power was unfortunately pretty crash-prone early in its development as well, but with enough feedback I was able to fix  most of them up. Hoping to follow that trend here!

BTW: Saving is in the plans! I haven't prioritized because I figured at present the game was short enough it wouldn't help much. But it will probably help chasing down crashes since you could post crashing save files, so I'll try prioritizing it for next weeks patch (which will release around 4/10).

I really appreciate the feedback! Very helpful to hear how the game is feeling from the outside.

I'll try painting the map soon and see if I can get that into the next patch.

I'm also not fond of the current UI and need to do another pass on it. Hope to do so soon!

A work in progress turn-based Strategy Roguelike. Make a pact with a demon for world changing powers, and survive the consequences. 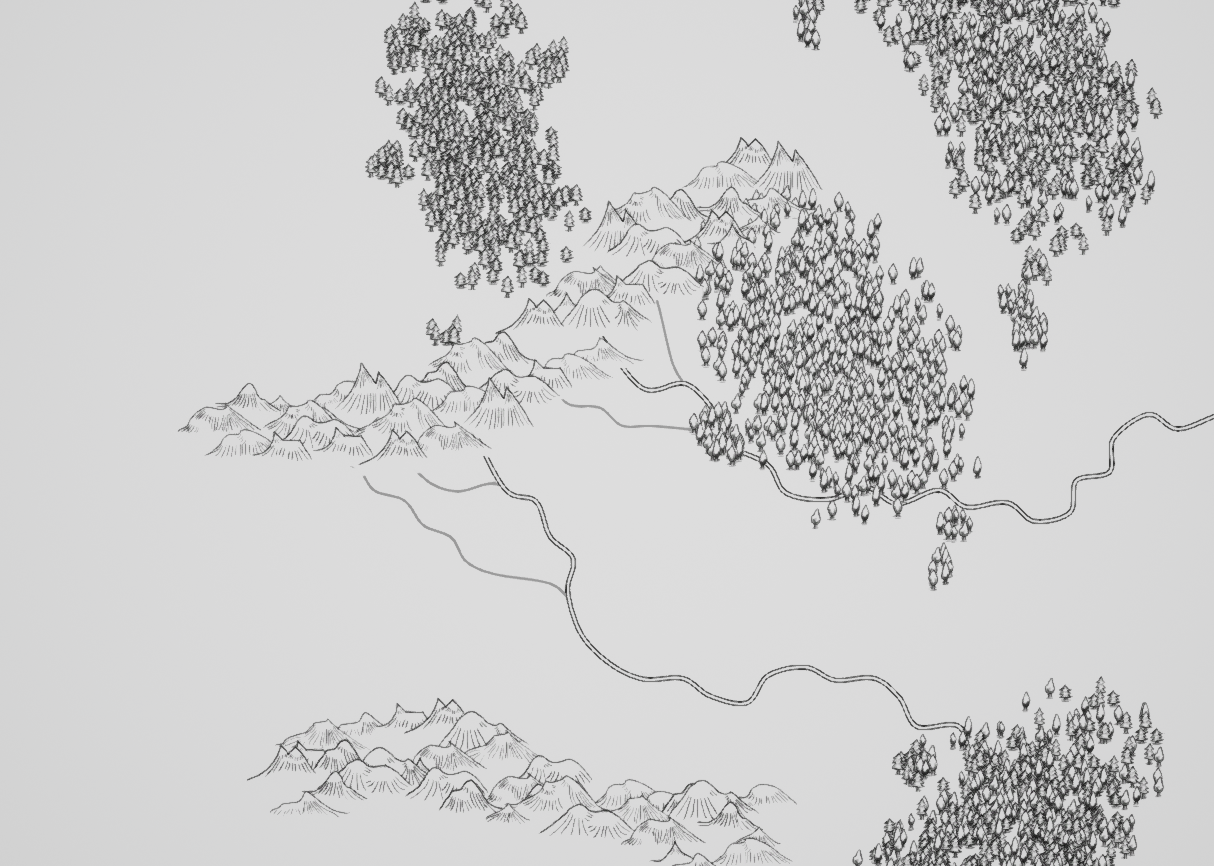 Pact just released with its first character, The Debtor. Make a pact with a coin demon for incredible power over money. Build banks, pay off enemies, hire mercenaries, and raise an army till you have all the money you could ever need.

Glad you like it! I'm working on a sequel of sorts, may be up your alley if you liked this:
https://porousnapkin.itch.io/pact

That is Unity's default font Arial. Sorry it's not showing up! That's strange.

Glad you liked it! Thanks for the thoughtful write up. I really like some of your ideas, like villages rebelling being a great thematic element, and in general agree that the game would benefit for more "stuff" overall (especially consumable purchases, great idea!). I think some of your ideas are going against some core goals I had for the game, though.

I like that player's units die a lot, for instance.  It plays into this image I have of the mage's dispassion towards his subjects and willingness to throw their subject's body between themselves and danger. I do want players to be able to run builds where you cultivate an army, but it's in general rare and really hard. You'll need to get a good selection of protecting spells, probably play a Battlemage so you can take some of the heat off your allies and aggressively get other allies to spread the damage out. Early in development, I found these strategies so prevalent that I started increasing how common "Counter" was to deal with it. It is mostly there to make sure that build still has risk associated with it.

One of the original goals I had was to make the archetypes play very differently early in the game but mostly similar towards the end. I tend to like this in roguelikes because I play through the beginning a lot but the end not as much (because, in general, I'm not very good at these games). So I want the variation to be great early on to allow players to jump into something else if it's getting same-y, but similar later so they can carry over experience between plays on the late-game regardless of class choice and go for a win. This has the unfortunate effect of making the other archetypes less interesting if you're really good at the game and can consistently get to the mid point. I tuned the difficulty for myself (who's mediocre at these kind of games generally) and I lose enough that it works for me, but I think there needs to be something like the paragon levels in Slay the Spire for better players to up the challenge on replays.

Thanks again for the detailed feedback!

Sometimes the artifact picking screen hangs, unfortunately. Sorry about that. Looks like you were having a great run too!

You can definitely run away with the game after the end of the notoriety. I originally didn't think it was possible to get that far and survive, but clever players find some ways. If you get there, you will have no trouble with the final battle for sure. Ideally, there would be a mechanic to push the player to the final battle before they've had time to become incredibly strong, but I never came up with a great solution to that.

I think I turned off the scoreboard a few years ago (so long ago I can't quite remember) because all the names in there were really nasty  and I didn't want to figure out how to automatically clean them up. Sorry about that.

Thanks for the bug report! Sorry it's soft-locking on you.

Thanks for the bug report! Sorry it's soft-locking on you.

Yeah it might be able to transfer to phones. Glad you enjoyed it!

Yikes that's a pretty nasty bug! Sorry about that!

Hope I can get you one someday!

Glad you like it! I've experimented with auto-selection when appropriate. People were more likely to get confused about how the game worked when it auto-selects the only available target. Probably that should be an "option" you can enable so it doesn't confuse new players, and experienced players can turn it on to speed up selection.

Glad you liked it! I like unlocks after death more than upgrades personally, but also think more would be cool.

Cool! Looks like you've nailed that style. I'm not looking for more art at the moment, but I'll message you if that changes!

I'm sorry it's not working for you. Interestingly, I find the Psychomancer the hardest to play! I've yet to beat the game with them, but have heard others have. I put the Lich first because it's easiest for me, but it's not too uncommon for others that it's the hardest. Maybe not the best starting choice in retrospect.

That's awesome! glad you enjoyed it.