Yay! I'm glad you liked it!

It does! Different planets but same universe!

I HOPED you would like the autopsy form, and let me tell you...I considered making it impossible to read...but I thought I would be nicer to the players.

Alright! A little digging and consultation and I've come up with two possible solutions. Apparently there are a few anti-virus programs that are just EXTRA bad about false-positives.

2.) Temporarily turn off your anti-virus

I'm not getting any anti-virus alerts on my handful of test machines, but I'll see if I can help you figure out what to do if the above don't work.

Oh no! Let me see if I can figure out why that happened. That's a new one on me!

What's the theme of the bundle? Or is there one?

Ah! Thank you! I'm so glad you enjoyed it, I really REALLY am.

I was JUST talking to a friend about how there are no Omegaverse visual novels. Excellent.

You've got a game breaking bug in the scene in the science lab while being introduced to the LI's. I got it after going straight there. Don't know if it repros going there after the other locations. Looks like a variable didn't get defined. 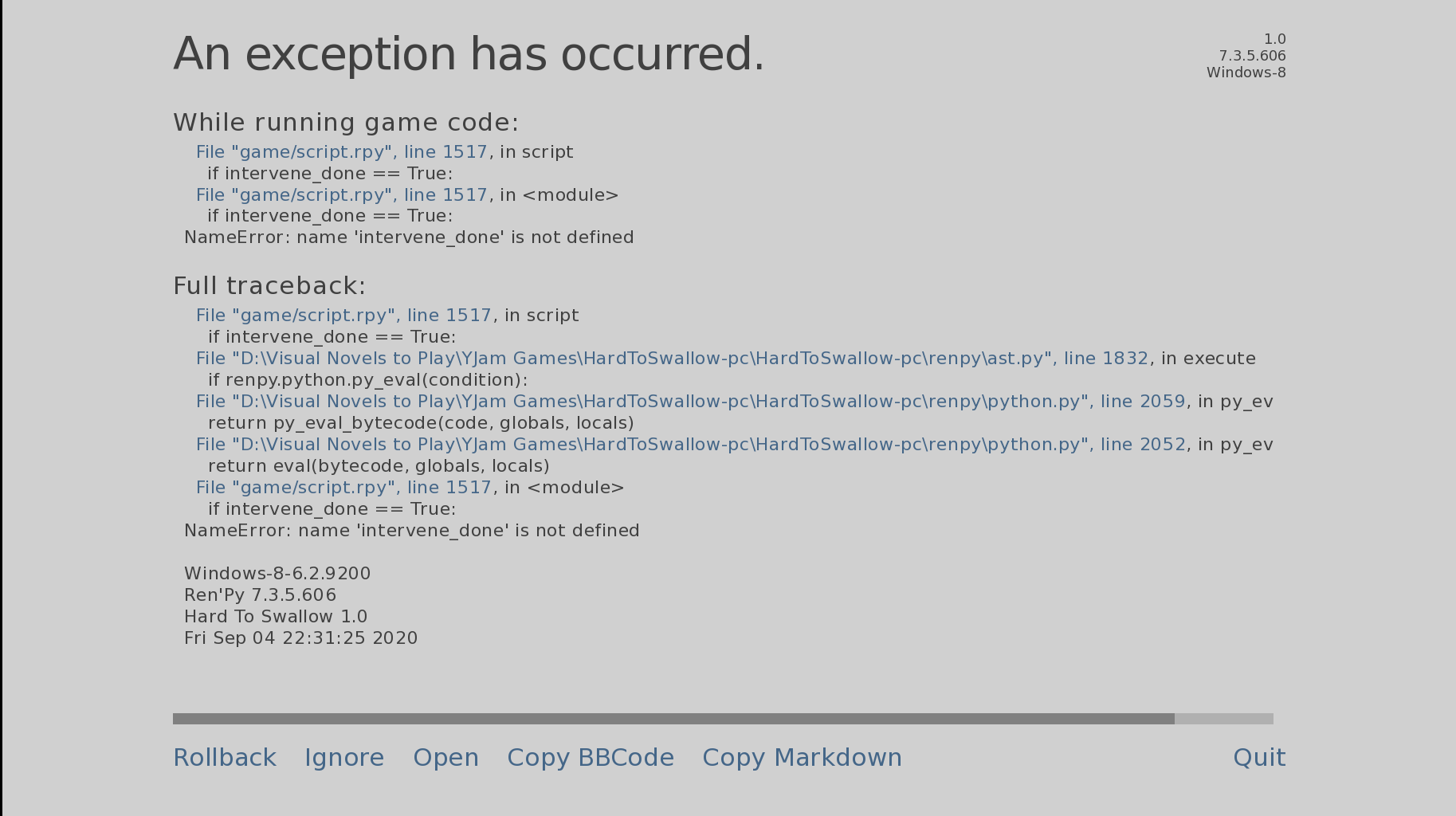 I'm so glad you enjoyed it! There are a number of things I would do different were it intended to be a longer game, but the shortness was part of the experiment, I guess you could say. Meninx is it's direct sequel, if you're interested in sitting with Ysa and Ari more.

"This is an excellent, tiny game. I died twice before finding the right ending, then kept going to get a feel for other ways to die. The art is great. Really gut-wrenching and well-done. Whoever did the screaming did a great job. The writing was nice and succinct which worked for the game. I only wish it was longer! The game description says they made it to get used to Ren’py. I hope they keep going!"

When I went back to play it second time, it looks like something in the game might have broke. I skipped through the dialogue to get straight into the puzzle and it opened alright, giving me the first ingredient and the first set of bunnies. Moving on to the second screen of the puzzle, however, the bunnies didn't reappear and there didn't appear to be any way to move on from that stage. I was also able to brute force the clock puzzle and trigger that dialogue, but as I hadn't opened the appropriate the screen yet, the game just kinda....stayed....I can give you more detail, but that feels like a permanent variable issue or something that didn't flag right when the game re-initialized.

Ah! Thank you!! I just put up an ending guide up if you need help along the way.

Thank you! I might have to talk to the team about that....

In a far flung future, aliens come to save us from our own ecological undoing. What secrets, however, are they keeping from us on this, our home planet?

Genre: sci-fi with strong notes of cyberpunk and solar punk

I'm the writer and designer and will be doing the bulk of the coding in Ren'py. I already have a sprite artist.

-ancillary coder in Ren'py, someone I can split some of the scripting with and help with QA

An interesting little proof of concept. Plants a seed for something more complex.

It was, like...soooo slight, and it might have just been because of the syncopation in some of the rhythms.

I feel like a few of the beats were a little off, maybe not as tight as they could have been. Otherwise this is a really cute little, quick game with an interesting concept. Nice little time killer. :3

I love this game. It's so goofy and weird, as well as marvelously well crafted.

Thank you! It's great to hear such positive feedback. I'm so ready to bring everyone the final route. It's probably my favorite, and I'm excited to share it.

I'll post this here so others can see it more easily!

I can't find the last cartridge, for some reason, and thus I fear I'll never be able to rid the earth of this menace.

I found it to be a cute little adventure/experience. A fun kinetic story with great acting (I'm bias, but it's TRUE) and a short, lovely story.

I actually thought I had posted this here to show you. Ooops. Gomen'nasai.

Reply
Sort the Court! community · Created a new topic Never too late for a gameplay video
Pixels and Pins3 years ago

Because I'm all about playing random games I find online.

This games was absolutely adorable. There were a few interface design decisions that gave be some trouble, but overall it was a hoot!

I tried to come in as blind as possible, and I had more fun than I expected, even once I started shrinking. I played before the update, so I'm glad that some of the minor user experience complaints I had are already fixed. I'm about to grab the new one, because I've kept playing this game. I went back to easy to get the hang of it, so now I'm working my way up to the highest difficulty.

I love this game, and I've never seen anything quite like it before, making it exceptionally fun. I'd love to see expansions in the future.

I really want to emphasize that I really had a lot of fun playing and it was goofy and fun. I feel I didn't do that enough before.....

Like everyone else I'm just...I'm just so bad at this game. But I had a lot of fun! I've played a lot of Trauma Center in my day, so the concept was easy enough to pick up. I think my primary complaint was that what you were meant to use on what wasn't obvious, and there wasn't adequate time for trial and error. I managed to get most of it right about 10 rounds, but the first few were a bit frustrating.
The click interactions weren't all responsive either, especially trying to click the bandaid. As through the actual cursor anchor were either inconsistent or just weird.

With it being a jam game, though, I totally expect those sorts of things.

I REALLY had fun playing though, and I had a hard time stopping. It's very addictive and impressive for the amount of time it was built in.

Very lovely little game, so far, with cute art and lovely, relaxed writing. I'm excited to play the full release so I can date my main mustard man, Jean.

Cute game with great voice acting and a lot of good stuff in there. Looking forward to the full release!

So I played this with a fellow game developer and some other friends who have a lot of visual novel experience.

When we came to our first ending (Zane's bad end) we thought it was pretty funny. A nice little meta approach to visual novels that we thought was amusing. Then we tested the Zane friend ending and that was okay. Then we get to the Zane boyfriend ending, and by then the meta endings sort of lose their lustre.

Having played parodies of visual novels and meta games and games that break 4th wall with the player, we weren't particularly fond of the way the game handled it. I found the level of antagonism toward the player to go beyond "fun" into "well f*** you, too," territory. Like a platformer that's beyond hard for the sole purpose of being hard. That's all well and good if that's what you expect, but I find it comes across aggressively pretentious in this format.

Having read about other routes, it seems like there are some very interesting narrative approaches, but the way the game has presented itself to me thus far doesn't make me want to engage with it anymore. That's a shame because it seems a like a lot of love was put into it, and it's trying to have a poignant message.

I understand why other reviewers seem to find a connection, but I don't see the appeal of a game that doesn't seem to want you to play it.

I started a Let's Play series for a gaming etc channel and I debuted with Magical Otoge Ciel. This is the first episode. There will be 12 total covering the first 3 hours of game.