Neat little runner you have here. I'd suggest putting in a high score, or an ending screen showing the end score, cause I can't recall how far I got in terms of score. I think 150ish.

Nice job with the roguelike. It's simple, yet satisfying. Smooth progressions from easy to hard. Not much of a learning curve as the game sticks to traditional controls and ideas. You've yourself a pretty generically good game here.

Quite a small game, but nevertheless a good foundation for something bigger. I believe it's an endless game, but for some reason my game ended at a score of 19 cause no more zombies spawned.

You've a solid base for an FPS here. I couldn't find any bugs. I'd suggest being able to get the left UI off the screen. After a while it just seemed to invade my gaming experience.

I can understand the tutorial being there. I see why you have to display 3 weapons, but it's messy and make the controls confusing. I'd suggest going with traditional controls, switching between what you hold all in one list like Half-Life. The vitality, armor, stamina could be cleaned up by representing them as a percent or health bar. That's just my 2 cents, I don't understand the game fully to really know what's important to gameplay. But from experience, most people like games they can pickup really quickly and that means sticking to FPS traditions.

This game looks amazing, but I didn't get through the tutorial. The UI was pretty overwhelming. Things just didn't feel responsive (maybe missing sound). Once I got to the gun rack, I tried a gun and it disappeared.. I couldn't change weapons to make it reappear again.. not sure what to do there. I'll have to give it another go some other time.

I gave this a shot, and thank goodness for a tutorial cause this game is deep. But unfortunately the tutorial is lacking. I couldn't make it through the tutorial. First, I was confused on what bed to use.. I used the $8 bed, not the $3 bed. Second, I didn't know where the prayer book was. Third, I guess I wasn't suppose to make time go faster cause that's what broke the tutorial. 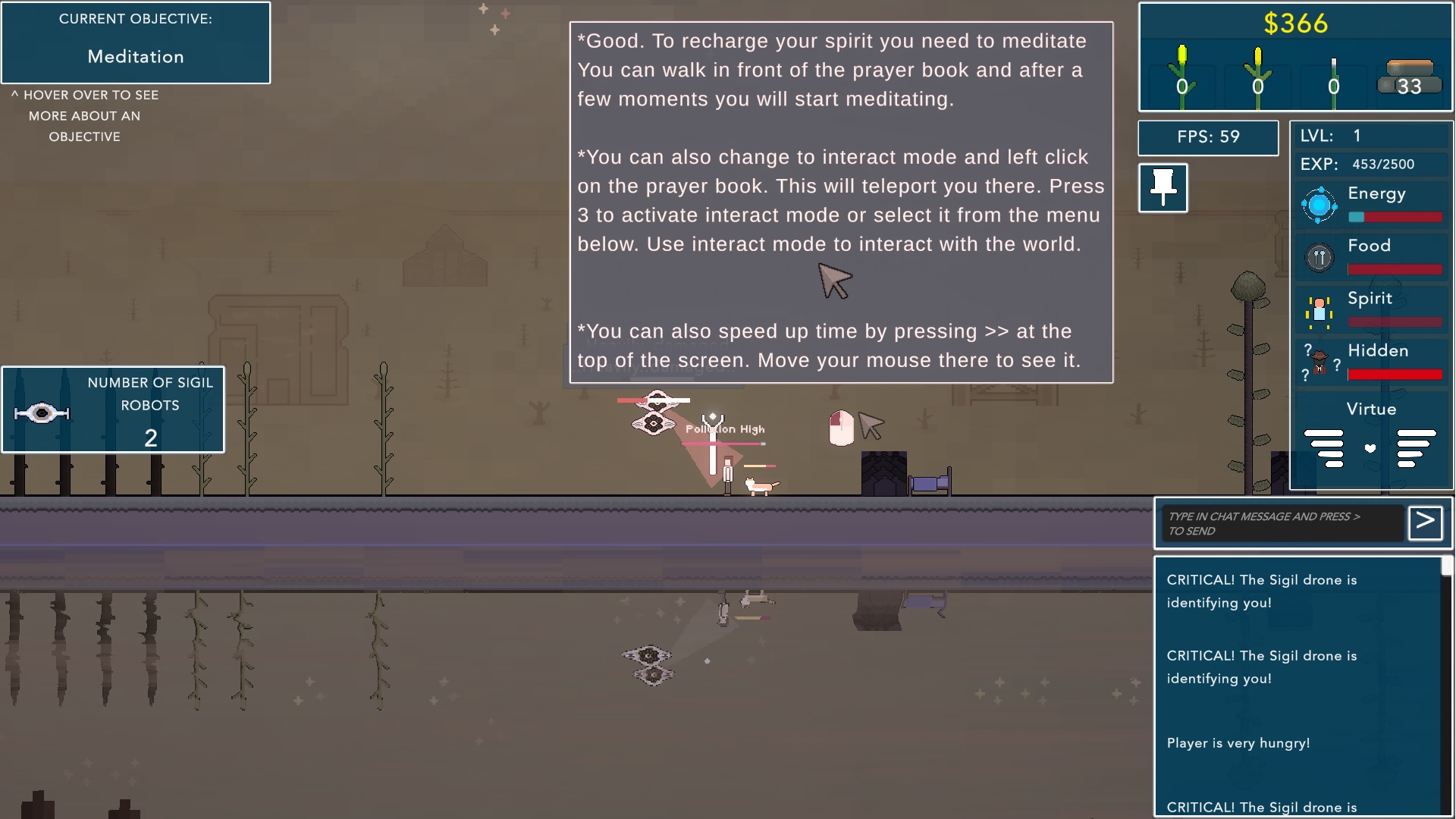 I couldn't get much further cause a bulldozer kept knocking my stuff down.. and then the tutorial just stopped and I had no idea what to do. I'll have to give this another shot later.

Pretty basic platformer you got here. I couldn't find any bugs. The music sounded great. I couldn't explore far to see much else of the game since I was constantly running away from enemies until they were in my kill zone. To improve the game some, I'd suggest adding a high score cause I can't remember what my high score is.. I think its 500. Overall, I think you have a good base here to expand on.

This game is super difficult. I couldn't even get past the first turn on level 1 and level 1 looks super complex. I'd suggest starting off with a very easy difficulty for level 1 and work your way up.

This was pretty fun and addicting once I got the hang of it. For some reason the [?] on the menu didn't work, which I figure was a tutor. Also found a bug where if you start the game on a level you just lost on, you lose instantly.

Some things I think could be improved with the game is having some sort of special attack with limited uses to help when you get swamped with enemies because once you fall behind, it's pretty much game over.

Some things I would change is instead of having the player lose if the player goes out of bounds, just prevent the player from going out of bounds. Also the player bounds don't match up to the enemy bounds because I've knocked a few over the line, but were not killed.

Neat twist with simon says. The graphics are well done, the music was very catchy. Best of all, I love the online scoreboard. Everything felt polished and responsive. You have yourself a good mobile game here. Good job.

Neat twist on the vampire survivors like gameplay. You have a really good idea here. The pixel graphics conveyed what objects are, the music was catchy, and the objective of the game was clear.

The only issues I had with this game was in the balance of difficulty. The normal mode was super easy. All I had to do was upgrade my turrets and walls and the game won itself. The chaotic mode was very unfair and impossible. 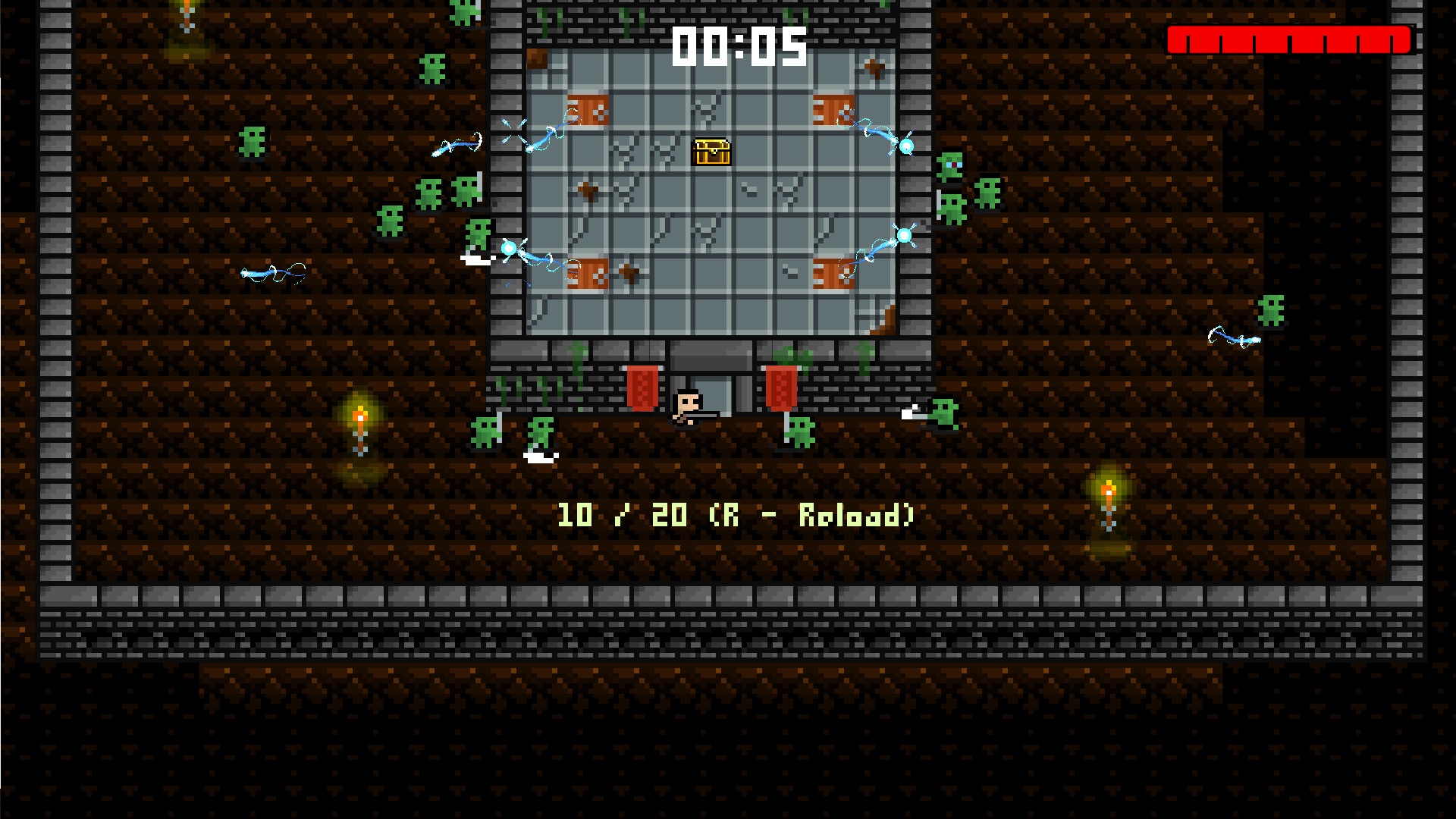 The other issue was with some pixel text that made it very hard to read.

You have a solid mobile SHMUP here. The graphics are good and the music gets me in the mood to play. The current enemies and background are good, but get old. I'd suggest spicing things up with level progression and introducing new biomes with new enemies.

One issue I had with the game was the player shooting sound. It either needs to be toned down or done away with because it's simply annoying.

And my final suggestion would be to get an online scoreboard so I can compete. Here's my high score: 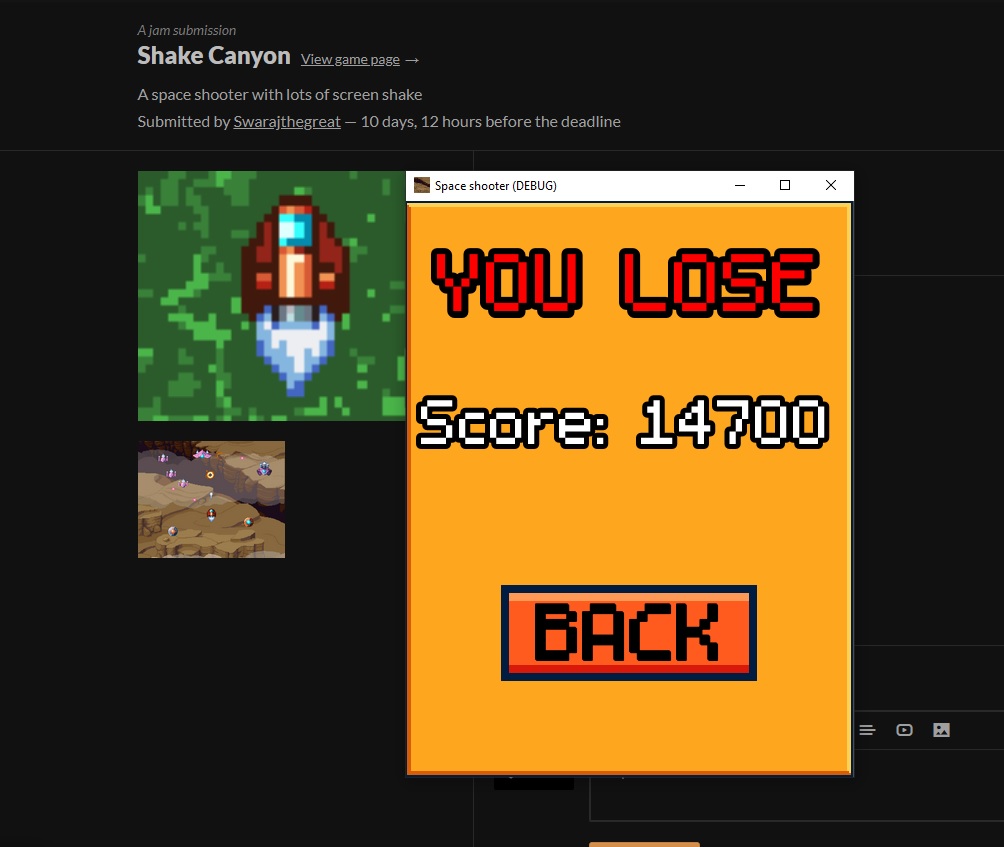 So this is my initial thought on the game that I feel like needs improvement: The game needs to ease me into it instead of just dropping me into it. The levels should start off easy and simple and work their way up. I was completely lost not knowing what I'm doing.. A tutor would be awesome too.

On the positive side, the game conveyed the controls well, the environments felt full and intriguing,  the sound effects were spot on, and the game had nice depth in gameplay.

Yo, I'm trying to play through the itch app and when I launch I get this error 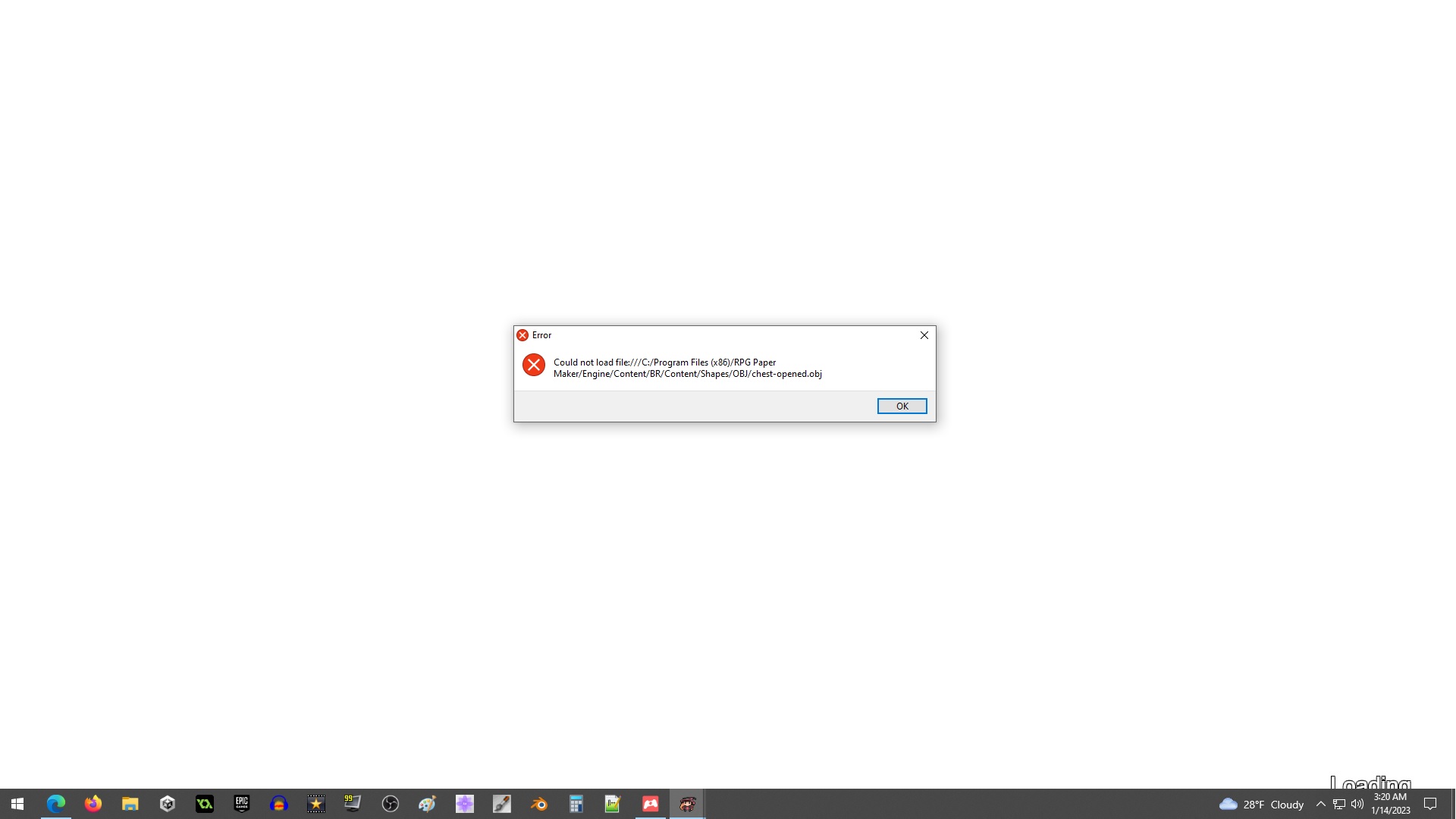 I tried playing, every time I select a green soldier and try to move it or attack with it I get an error and the game locks up.

Very cool point and click adventure. I liked how all the scenes were filled with things to do, the world felt wholesome. I like the theme and the ghost at the lake nailed the theme. I'd suggest getting rid of cycling through actions with the right mouse button when trying to interact with things because that really ruined the experience for me. Also, when talking to other characters, sometimes what they say disappears too fast and I miss what I'm suppose to do. Just a few tweaks in my opinion and this will be an awesome game!

Pretty clean game here. I easily learned the rules of the game, but some of the text was hard to read. I noticed when moving back to an area from where I came, I'd find myself in a totally different area than before which threw me off and I lost my bearings on where to go.

I really liked the story here, had me hooked and that's all an RPG really needs to be great  in my opinion. I think you have a good game here, all you need is your own art that goes together.  I got stuck in the caves, I've no idea how to use the 3 levers. Just a few more hints around the level would be nice. Also, in the forest, the twinkle indicator for the blown up bridge doesn't stand out, so I was lost for a minute there. 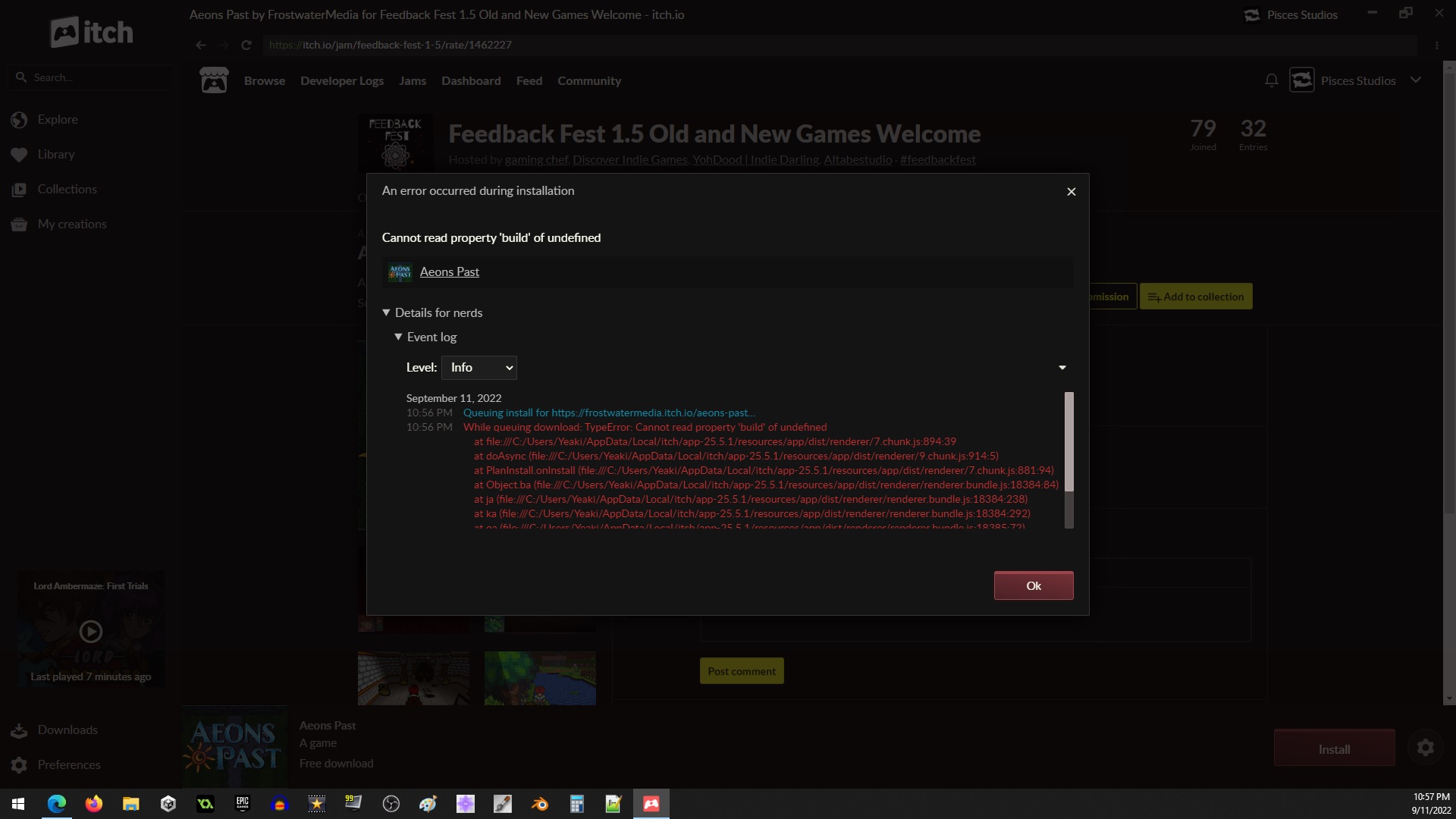 EDIT
I was able to download it through the browser.

Pretty solid RPG. The camera controls took some getting used too. This game really reminds me of the original elder scrolls but in 3rd person. I like how the game progressed. I didn't really like the camera, it felt like tunnel vision, not sure if there is a way to zoom out.

One of the most enjoyable puzzles games I've played in a long time. I did encounter an issue with not being able to control the character when the scene faded in twice after dying.

So I followed the tutor instructions, and then I pressed play and watched my funds deplete. My "Current Jobs" didn't do anything. I'm still really lost on how to play this game.

Hello! I made it to wave 10. Took a minute to get my eyes adjusted, I think the game would look better without grid drawn. Also, some tips or tricks could be added for better UX. I'm not sure if there are upgrades; the knights and rooks seem to always get through my towers. Very basic tower defense you got here with potential.

Haven't played a classic RPG in a while, this one has me hooked. Good story, easy to learn how to play, and good puzzles. I did run into an area where I was stuck on the lowest floor because I couldn't jump up to a platform 1 space up; I also noticed some frame rate drops. Nonetheless, very awesome RPG!

Thanks. A couple months away. In the meantime, I'll try to post video blogs weekly. Check it out.

This issue is now solved and the fixed game has been uploaded. This fix was tested on Windows 10.

I’ve replicated this on windows 10 and am finding a solution to the problem. Stuck at work right now :/

That's an interesting error. Can you sequence the events that got you to this error? Also, is this windows 7/10 64-bit?