Personally I don't think I can forgive triangles for the sorts of things they have done to squares in the past... but perhaps if the squares can forgive them I can as well.

For months and months I've had this thought in my head "What if Geometry Wars was a platformer?" This game is a result of that thought, it's something I built in a short amount of time so there are just a few core mechanics.

You're a red square and Dimitry wants you to jump his walls. Unfortunately for you, Dimitry is a dick so he keeps moving the walls. What's worse is that he keeps spawning the square's mortal enemy - triangles! Can you JUMP DIMITRY'S WALLS!?!

Sorry this has taken so long... I think I forgot to send this to you ...

Reply
itch.io Community » General » Release Announcements · Created a new topic A vehicle building game where you're a ladybug - Making it Home - is out now!
Pill Bug Interactive261 days ago (1 edit)

You're a ladybug with family issues building a vehicle to travel across the USA.

After 3 years of development and 1 year in early access Making it Home has been fully released!

Put your engineering and creativity skills to the test as you combine simple elements into a complex contraption. Jump around your vehicle to keep it moving and defend it from an onslaught of cherry bombs, flying drones and carrots. 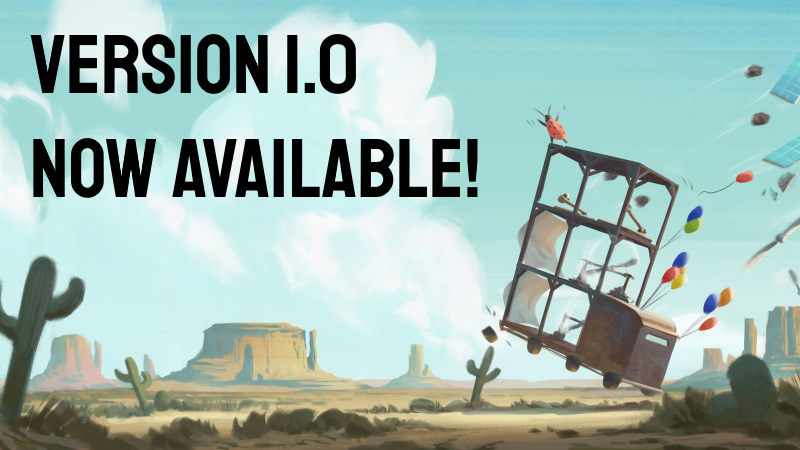 As you select your route across the USA you'll have to rethink your vehicle design as you face various challenges. To help you out the game has steam workshop support and local co-op. On your journey you will be introduced to members of your family through an interactive narrative with plenty of secrets to uncover.

We are a two person team based in Wales, UK, both full time university lecturers working on games in our spare time. The game is currently 20% off any support you could give us would be greatly appreciated!

Hey! Could you send me a list of names of people who worked on this please?

Thanks for your kind words Toma! It means a lot to us.

I’m super excited to announce that our vehicle building game Making it Home is now available in Early Access  (currently 15% off!)

We’ve been working on it for a while now and are super proud of it. It’s something we had the idea for 3 years ago. In Making it Home you are a ladybug building a marvellous contraption to travel from one side of America to the other. As you travel you’ll unlock new components to build your vehicle and discover ways of making them work together. You’ll meet lots of different characters and face different challenges to push your design skills. Then when you just want to chill out and optimise some designs we’ve added some challenge modes with leaderboards for that.

It’s the biggest game we’ve made and it would be great if you check it out today and join us for the Early Access journey!

It’s a game where you have to design and build a vehicle full of weird contraptions to travel across America. Also you’re a ladybug.

We've been running a close beta for a while and will be releasing in Early Access early August. The demo you can download from our itch page is the last beta build we published.

Thanks! (1) No, they are just the first selected - mainly for people using a controller. (2) Yeah, we are going to add some stuff related to this.

I've uploaded a tar which hopefully will help.

Thanks - my interpretation of the problem was wrong sorry.

I'll add a link to this thread in the description, thanks. The problem we have is that Apple don't care about backwards compatibility at all, we used to recompile stuff every time they broke something - but more recently they made a change requiring developers to pay for some kind of certification (can't remember exactly what it's called). This is why with a few Unix commands you can get the game working - it works but Apple are trying to enforce a closed ecosystem. They literally stopped most games working overnight - Steam took the step to add a layer which somehow bypassed it - but it's a bit of a hack. (They happened to introduce this around the same time they announced that game pass thing btw)

I know this is probably frustrating but if we knew in advance we wouldn't be able to keep up with this stuff we wouldn't have released a Mac OS version.

You can edit controls in the launcher.

No, Apple changed some stuff which made developing for Mac's really difficult for small teams like us.

Have you tried changing the controls in the unity launcher? That might do it, let me know if it doesn't work.

Reply
itch.io Community » General » Release Announcements · Created a new topic Making it Home - You’re a ladybug building a marvellous contraption to travel from one side of America to the other - Coming Soon!
Pill Bug Interactive2 years ago (2 edits)

You’re a ladybug building a marvellous contraption to travel from one side of America to the other. Bounce around your vehicle, hoisting sails, squeezing bellows, and spinning propellers. How will you make it home?

We've just published the itchio page for our next game Making it Home! We are aiming to release this Summer on PC and Linux. See the store page for details and follow along to keep up to date!

Thanks! Yeah of course.

Hey, thanks again for submitting this to Climate Jam 2018. We are submitting a journal paper describing a number of the games. Would it be okay if we included a screenshot of Climate Cards along side a link to here?

Hey, thanks again for submitting this to Climate Jam 2018. We are submitting a journal paper describing a number of the games. Would it be okay if we included a screenshot of Isorropia along side a link to here?

I'm one half of a small development team in Wales called Pill Bug Interactive. We can't afford to go to GDC but we are celebrating our 2 year birthday tomorrow which I'm incredibly proud of.  We simply wouldn't exist without itchio so thanks leafo and everyone in this community who has supported us. Prepare for lots of reflective gushing...

In 2016 I uploaded this weird game, Intelligent Design: An Evolutionary Sandbox, I was working on as a way to learn Unity3D to itch. The community was welcoming and gave me loads of feedback and advice. Eventually someone said to me 'Why don't you put that on steam greenlight?' I did and Pill Bug was born. The months following were a rush, loads of people played the game, I learnt some hard lessons about trying to sell things and manage communities... but I made enough to support a second game.

Our second game was a small shooter heavily inspired by asteroids and Luftrausers called Cycle 28. Again we released it first on itchio to get early feedback and ideas on how to move the game forward. At this time Dave (a writer by trade) joined Pill Bug so we focused on making this tight arcade game into a narrative experience - something people don't expect. People really like the game and it's something we are really proud of, we even managed to release it on Nintendo Switch™!

Anyway, that's enough of me feeling nostalgic and reflective. Itchio has been so helpful to us as a small studio, it's allowed us to create games, those games have generated income which has supported artists, composers, accountants and graphic designers who are all living their dream - none of this would have been possible without itch.

We have been invited to present some of the entries to Climate Jam 2018 at the Swansea Fringe #Games Day.

If anyone is local to Swansea and would like to come along to show your game get in touch with us on discord. 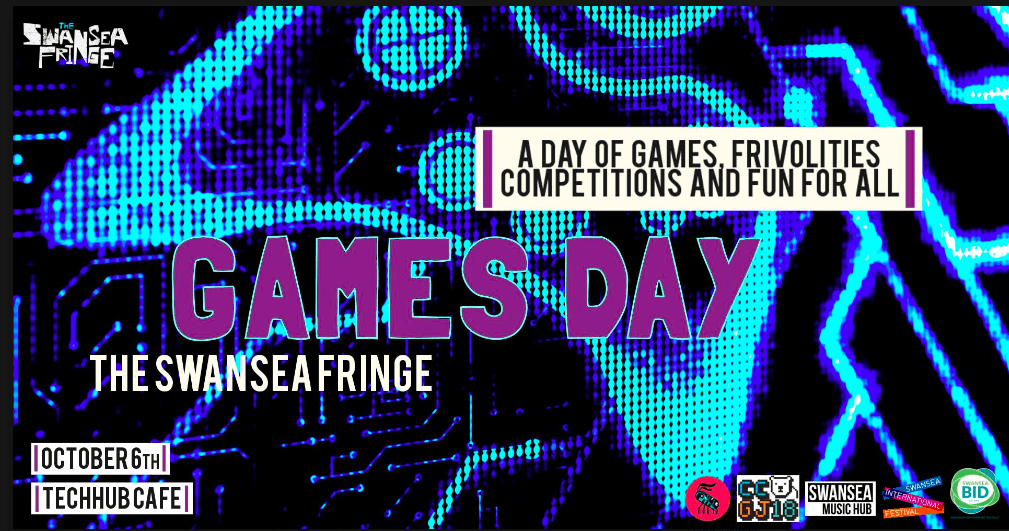 The results are in!

From me and the entire Climate Jam team I wanted to say a big thank-you and congratulations to everyone who entered a game into the jam. There were lots of great ideas and it was really interesting to see the different approaches you all took to communicating climate change.

The winners of the prize draw have been selected from those of you who completed both surveys. That is currently with our finance team and the winners will be notified soon, I'll post a reply to this thread when that happens.

We shall also be getting in touch with some of you via your itchio email addresses in the coming weeks to discuss the possibility of applying for further funding to expand your ideas.

Most of you should have had this sent in an email, but just in case here are the details for the second half of the survey.

Now that Climate Jam 18 has finished we just wanted to send a further email to say thank-you for your hard work and enthusiasm. We really have been blown away by the games submitted and all of the effort you have put in. We are currently busy playing and judging the games – it’s been so much fun!

We are also contacting you as you previously agreed to be contacted with our ‘post-jam survey’. You can access the survey here:

The post-jam survey is shorter than the first (it should only take about 10-15 minutes max) and we would be incredibly grateful if you could take the time to complete it. The survey will remain open for a couple of weeks and once closed, the prize draw will take place. We will then contact the winning recipients via email – Good Luck Everyone!

We will also send a reminder email to you all about the post jam survey when we near the end of the survey collection window.

Thanks again and we will be in touch again in due course,

Claire and the Climate Jam 2018 Team

You'll get an email.

Hi all, I sat down to play all the entries today and here is the video...

Be sure to share any more lets plays you find!

It's currently being finalised, just waiting on some approvals - universities tend to move slowly :(

Glad you enjoyed it and thanks for submitting a game.

The voting time is a long because we want to get climate scientists involved. Being August many are on holiday either at the start or end of the month, and we want to give them all a chance to vote.

I've asked Dave who is our climate expert, he will get back to you soon!

Completely up to you

The prizes for filling out the survey are separate from the game jam judging process. Everyone's contribution to the survey are equally important, therefore as an incentive to get everyone to contribute, the survey prizes are a lottery.

The winner(s) of the game jam itself will be offered support to apply for science outreach funding.