This weird mistake is affecting many old Pico-8 games outside from the official website.

It isn't only a Firefox problem, Chromium browsers also affected.

Music & SFX doesn't work. This weird mistake is affecting many old Pico-8 game outside from the official website.

Nintendo Switch Browser? If it hasn't been released so far.
Wii U and 3DS were the last Nintendo consoles to have a built-in browser.

Hi Zashi, ¿Do you want a Discord server recommendation related to game development and tools on itch.io?

I can think of a couple of them:

The first is related with one of my project: https://discord.gg/UyacSFF

And the other is a online tool called "Pocket Platformer": https://discord.gg/JDQy2NtKDf

I have many games in my game collection: https://itch.io/c/34326/ofihombres-collection

Max power out of context:

The music isn't on loop.

Tetris Asteriods in a Nutshell.

Reply
itch.io Community » General » General Discussion · Posted in How many of the games you downloaded from itch have viruses?
Ofihombre50 days ago (1 edit)

It will be you use Edge Chromium or Google Chrome, those browsers take as a virus any download that isn't official from the respective companies (Google & Microsoft).

The mouse-based camera rotation is slow and clunky, there should be an option to adjust the sensitivity.

"Kirbo be goin turbo", Kirby get a gun while he say "Turbo-Tastic!" XDXDXDXDXD.

A bad point that I could consider about the game is that it reaches a point where it crashes and the image freezes.

Great graphic change, and finally you fixed the number 7.

Just after posting this post, I just tried Flax, the engine it really intended to use for Randy & Manilla after the merge scandals of  Unity x IronSource and layoffs. Using it, I found that it did have some very cool features (such as instant play of the game or it's scripting language), however, it still looks like an alpha on many other features (like a store, or the animations).

Well, I will just wait until Flax has enough features to be a viable replacement for Unity or Unreal. Anyway, I have no choice but to finish the game with Unity 2019.2.9 before abandoning it permanently. Developers who use Unity and can't properly align with Unreal or Godot, shouldn't update the engine, don't buy anything else from the Asset Store, and don't use their ad services as a protest against the abusive policies of the company behind the engine.

Unity is basically the Youtube of the game engines (or worse), very popular, easy to use and bad policies and decisions that make it more and more humdrum and conformist.

If what you say is true that it will only affect the mobile games, then fine, I will finish my project with the version of Unity established and for the next one I will change of engine.

I have a game made with Unity called "Randy & Manilla", and to this day i still use the Unity 2019.2.9. But after the news of the merge with Ironsource, I was forced to change the engine for 2023, but I don't know which one to choose. ¿Unreal, Godot or Flax? Speaking of Flax, I've heard that it has a very similar interface and scripting language to Unity. But nevertheless, since I have it in development since 2019, what do you think is the best option?
Change the engine, or keep the existing one to finish it? 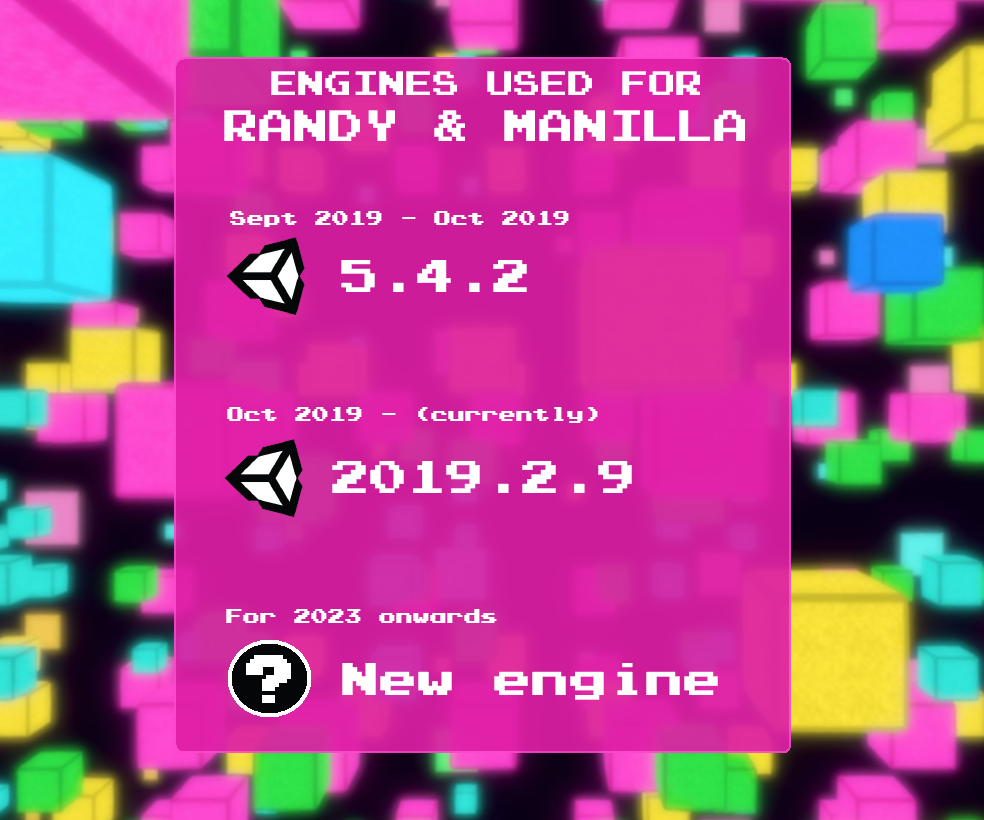 There are some examples that end in 99, and they are Battle-Royale for that: game like Tetris or Pac-Man.

Manilla makes an adventure in Pocket Wonder's net-cube, it's like in Wonder Race, only everything is in 2D and in a minimalist side-scroller.

Overcome the obstacles and collects the qdatas as fast as possible until reach from the goal. 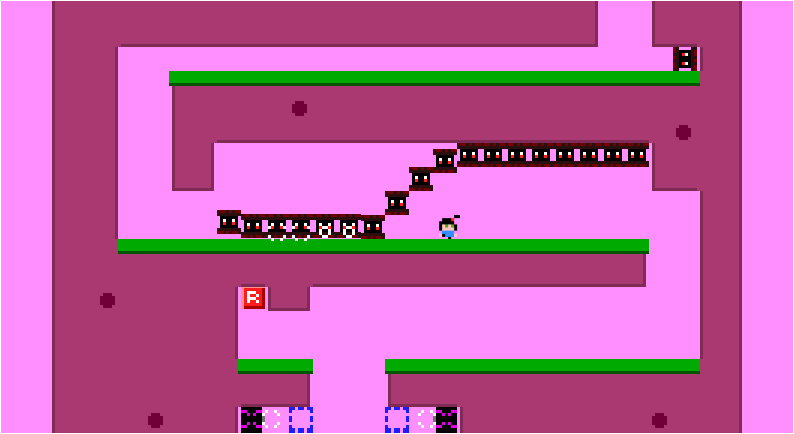 Very good, a racing game on a huge open stage in Vaporwave. And by
the title "Wirewing Racer 99", It has everything to be a battle-royale game with online mode.

Hi. Could you put that it would possible to upload music directly from the files? It's that by way of the URLs it's very unstable, since after a few hours it stops working, and most of them don't even work the first time.

Hi. How did it the source code of your game get broken?

More than a clone, it's a ingenious parody of space invaders, especially because of its title: Accidental Alien Attack!

Never mind, It has been updated and now it works correctly.