This was a funny puzzle! ;u; Also a little thought-provoking in a way too.

The same enemies will appear at the same moments in the song but as far as I know, they'll be positioned differently as spawn locations are pretty much random.

Awesome game! Several curses stacking on top of each other makes for interesting runs, and I love the heck out of the amen break usage! OUO

Heheh, glad you enjoyed it! c: Reassuring that this hits with peeps familiar with NecroDancer!

This is a fun concept! :D I love the strategy of weaving around the board and through your own walls to stay out of enemy sights and/or stall long enough for them to be out of the way, and all from simple mechanics too! Also feels satisfying to be able to put up a marble wall when an enemy's about to attack you.

Rad game! I really like the Y2K aesthetic via the graphics, sounds, and music, it all comes together pretty nicely! Controls are a bit tricky to get the hang of though, but it's a fun challenge. ;u;

Awesome game! :D I love the "object vs. object" mechanics, the minimalist yet cute art style, and the chill music!

This is a pretty charming game! I like the pen + paper aesthetic and the way the lines wiggle as you're moving through the dungeons, the actions log being the player and the GM saying things aloud, and the game's story. I felt immersed and could imagine myself and the GM sitting across from each other (at least until the end, that was a funny moment there). ;u;

This is such a clever concept! I like the strategy of positioning yourself and enemies in a favorable way for your board's sake, the different abilities to utilize, and the fact that you can match hurt/damage tiles just like any other tile. The presentation looks clean and stylish too. Gooooood stuffs!

Thank you for the feedback (and the bug report, sorry about that coming up during gameplay), glad you liked it! c:

Neat game! I liked the "items = HP" mechanic and the challenge of trying to poke at enemies with your swords while not getting hit by theirs while they all rotated around. I found myself getting lost in the large levels at times, but it wasn't a massive issue for me.

This is pretty fun, I like that the music evolves as you progress through each level. c:

Cool game! I like the concept and the minimalist presentation reminds me of games from the Art Style/Bit Generations series, and I love those games! :D

This is such a dope concept!  I like the depth that this game has with both trying to wrangle letters together while not hitting more than you can handle, and the minimalist style looks so elegant and cleannn. c:

Cool and compact roguelike! I like the clean-looking graphics and the strategy of controlling the colors (either by laws of nature or mixing/drinking potions). c:

Noice demo! Being able to rotate your ship around is an interesting gimmick. c:

Awesome, thank you for the fix!

Heck, played the latest version of Momentum at the time of me writing this comment (the one that introduces options (thanks!)) and I noticed that when the scaling setting is changed, the ball becomes invisible during gameplay and stays invisible upon pressing R to reset for a new round. :o The ball's visible again upon closing and reopening the game though. (Also the volume & scaling reverts back to 100% and 3x respectively when you close and reopen the game.)

This is a pretty cool game, I really love the mechanical aesthetic (via music/sounds, slanted UI, digital text, and the title screen's letters spazzing out once you select something on the main menu)! Also appreciate that the replays play in the background of the gallery while you're there, makes it feel very lively. c:

Nice game! The concept and aesthetic are cool and I appreciate each level having a theme. :)

This is pretty fun and addicting, love the minimalist style too! c: (My best is 17547 so farrrr)

Neat lil shmup! I like the health being conveyed by the amount of claws you have and how you gain it back over time, and manually being able to detach them seems interesting too.

I have no idea what I'm experiencing but I like it, and I wanna thank you for recreating it as this is how I found out about Sleepy Boy!

(Also, I just noticed that the gif for the game used in embeds for stuff like Discord acts a bit chaotic with its background flashing red and white a few times :o Not an expert on seizures so I dunno if this is extreme enough, but it's a bit jarring. It doesn't do that with the gif on the itch.io site but I thought it'd be good to mention how it looks elsewhere.)

This is a pretty cool and juicy puzzler! The concept of planning moves to make sure things happen the way you want them to is neat and I like the fun UI (slanted test on the sides, combo count/combo break/game over text and lines scrolling through the screen). c:

41 lines on Life Tetrible! This is a pretty funny one, attempting to slip pieces down towards the bottom once the top was all jumbled and whatnot. ;u; 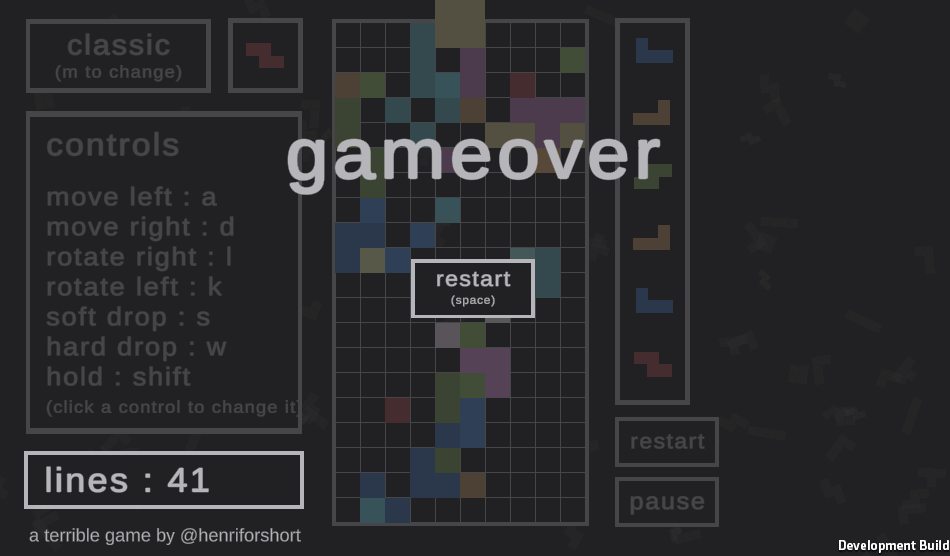 I admit that this feels a bit scuffed since there were moments where some tiles were visible, but the pieces could pass through them and said tiles were part of lines, causing them to not clear, but yeahhhh.

This is a pretty neat game! Love the procedural puzzling action to try and hit bubbles without leaving any behind, the timer being a circle that gets smaller over time instead of another number is cool for minimalism's sake, just like with the rest of the game (I dunno if that's the right reasoning for it but it just fits; It's noticeable but doesn't ask you to glance at a number, something like that...Or the timer is a bubble itself!), the flyaway text is fun touch (and definitely emphasizes points lost when bubbles are left behind), and the background page looks noice~

And on top of all of that, this was all fit into two tweets? Excellent work! OUO

Oh geez, this is a very strange and cool concept! I like the idea of having to be cautious about menuing to either stall the pink blob to move a piece past it or be careful to not accidentally craft something while trying to rotate my current tetromino. It's also pretty funny that it's possible to clear lines that include stuff like furnaces and compressors, effectively wasting the resources used to make it. ;u;

Cute lil dodge-em-up game! I appreciate the small white waves of water helping with the immersion of sailing through an ocean and other bits of polishing (the ship's flag waving, the "press X" text blinking, the fade out when you restart the game, etc.). .u.

This is a neat and polished-looking roguelike!

Aaaannnd 11910 after reading that stomped stuff gives half points and being more chaotic with setting off chain reactions! (Will leave it at that for score updating, just wanted to fulfill "great" status for 10000+)

This is a pretty cool game! :D I enjoy the intricateness of the player's movement, allowing for getting out of tight situations, and all the interactions between objects are fun to initiate and watch unfold. My best after playing for 17ish minutes was 5015 and I'm eager to break that record. .u.

Aaaaaaaa, hitting with the wrong end of a pickaxe is such a funny way to realize your true strength with a major breakthrough, humorous/good choice of wording. ;u;

Oh my goodness, I rewatched a Money Idol Exchanger gameplay video recently and realized the "Did you pay the money, didn't you?" on the machine in this game's tutorial is a reference to what Sakura says in MIE while tutorializing there, good stuffs. ;u;

Aha, I seeeee. Thank you for the explanation! c:

Coolio action puzzler! I like the colorful/lively aesthetic, all the characters look rad (I especially like how Scootsie sits on his pile of coins and rolls them around and Loona holds the coins in her mouth instead of just holding them regularly), and the game feels pretty fun and fast-paced as a whole.

Also, it's a bit of a technical question, but is there a surefire way to determine where the newly-created coin from exchanging a group of coins will be spawned? Here's a few examples of what I mean: 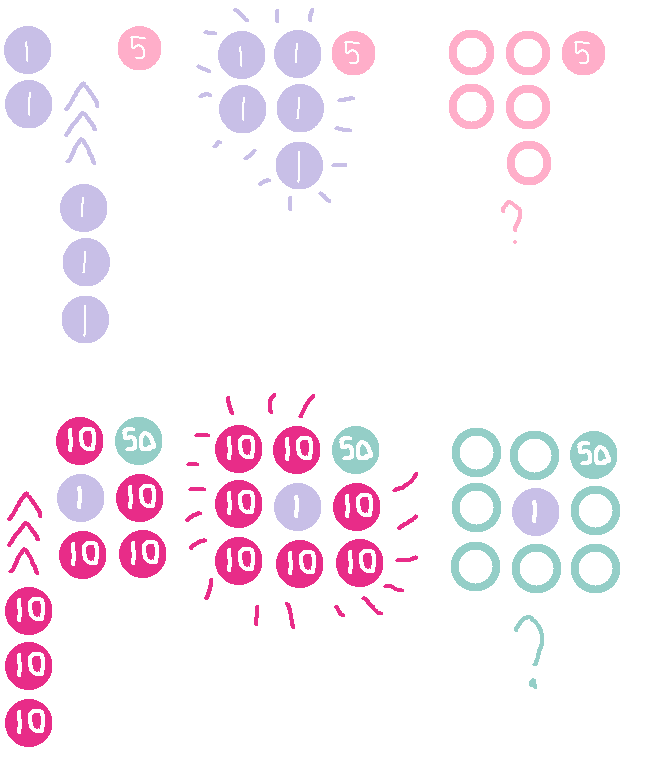 (Some spoilers for the whole game (and general Sokoban tips, I suppose) ahead)

Neat game! I like the particles that appear when you're pushing crates and when you've pushed one into a target spot. One level transitioning to another via the sliding camera is cool too.

I think most of the puzzles might've suffered from not too much puzzling stuff going on and instead just going through long paths to get the boxes to their targets that are either a few tiles away or have to be hauled over several tiles. (I liked that the last level spelled out "THX" which I assume is you saying thanks to the player for playing the game though, it's a cute touch!) Seems odd to call it this but it feels like Sokoban busywork which isn't horrible, but can be eh when not done sparingly or with enough puzzling moments to balance things out. Still, some Sokoban principles can be seen like being cautious with boxes up against walls/other boxes and corners. I also like what was done with the ice once it was introduced, was interesting to see that it only moved you two tiles forward as opposed to making you slide until the ice stopped, but it's fine! Led to some interesting moments where you had to have the right parity in order to continue pushing a box on ice tiles with dark pink squares on them. 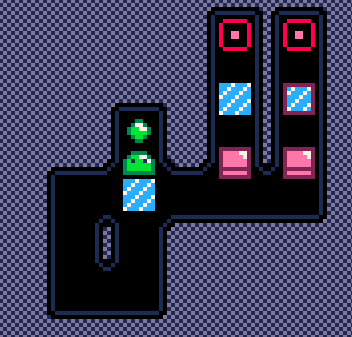 Also, this above level had confused me the first time through because for whatever reason, I decided to go into the right lane first and when I pushed the box there to the target, I didn't expect the level to end since I thought all the targets needed to be filled for the level to be completed. To keep with the consistency of such a requirement, yet show that boxes can't be pushed onto ice tiles that don't have a dark pink square on them, maybe you could make it so you still have the two paths, but they lead to a large square that has only one target inside (or branching off from it). Something like the following (please excuse the poor cutting and pasting, hope my point gets across though): 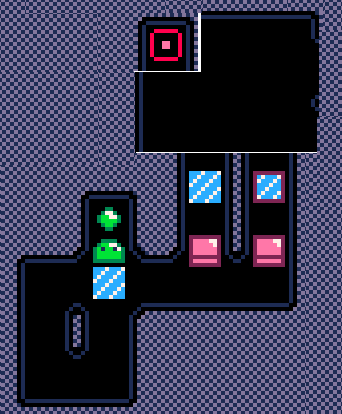 Lastly, a small nitpick as I quickly got used to it, but I think the way the walls look in comparison to the other objects (player, boxes, targets, etc.) make it strange to imagine the tiling of the grid space they move through, if that makes sense. It's most prevalent in places where turns/intersections occur or there's one tile in between two objects like here:

I dunno, it just felt off to me at first.

Overall though, this is pretty noice for your first Pico-8 game!

Fun concept! I feel like this was intentional/planned, but it was interesting to see that only being able to select boxes that you can see (with no way to shift the camera) made the decision-making for what boxes to link and which one to be the base of everything tricky (in the sense that you could softlock yourself out of being able to deselect a box if it's not close enough), especially with Level 3.

A very small nitpick, but perhaps the level mechanic that lets you pass through walls could be renamed to something like "power level" or just "power" to distinguish it from the levels in the game.