Mission: It's Complicated community · Replied to vincentwordsworth in Two Criticisms (Spoilers Ahead)
misha.velichansky327 days ago

I hope you enjoy it! Whenever you get to it haha :>

Reply
Mission: It's Complicated community · Replied to vincentwordsworth in Two Criticisms (Spoilers Ahead)
misha.velichansky328 days ago

Absolutely! And in-universe, that's the explanation. But I think CyberneticSusurrus' point is that it's not universal, so it might have been nice to see the two gay characters have different reactions to the nb character. Ofc, then I'd miss the stories I wrote for them :D the only answer would be to have more characters! This is one of those issues that one day will be less of an issue, I hope, because we'll just have more depictions of queer people in general and no one depiction needs to try to do it all.

Reply
Mission: It's Complicated community · Replied to CyberneticSusurrus in Two Criticisms (Spoilers Ahead)
misha.velichansky330 days ago

Aww thanks for the kind words! I actually love the idea of "I only love [men/women] and you're non-binary" doubling as gender affirming even if it's also disappointing haha :D I think there was some subconscious desire on my part to not write rejection, but I wish I'd realized I was doing it, because writing romantic rejection turning into friendship would have been cute as heck.

Hey CyberneticSusurrus! Kind of a wall of text down there, the tl;dr is you're right and these are great points and helps me to level up in writing this stuff. Thanks for making them! Feel free to read on if you want musings, but none of it is really that important.

Point 1: I agree on 100%, and it's one of my regrets with the game. Ideally we'd have had more characters (we originally planned for 7!) and then maybe we could have had a non-alien nb. Or just had another human character. I really wanted alien dates though, haha :D >.< In our sensitivity reader's defense, it might have been brought up, but while we brought her on early enough to make big changes, it wasn't so early that we could have completely redesigned the character, so maybe it was one of those we (I) decided to live with. But yeah, it's not ideal, and I know the trope -- I just didn't realize it in time. Whomp whomp :( Maybe if I'd had my gender stuff figured out better back in 2018 I could have done it better, haha.

The game also has no ace or aro rep at all except for being able to self-id as ace :( Another regret. (Originally all ships were going to be romantic, and then we made the call to include gay characters, but only like 80% adjusted to that pivot. I didn't realize how much I would love the friend dates until I wrote them and there was no more time. So it goes.)

Point 2: Yeah, this is a tough one. I'm not sure I even thought about it, so that's a learning opportunity for me, definitely something I should have at least been consciously deciding rather than defaulting. There's certainly folks who identify as gay who are still into non-binary people, and I guess the in-world excuse is that both Zirconia and Riptide fall into that more open-ended self-identity. But IRL, yeah, I agree -- at least it should have been discussed more, or maybe it would've been better to have only one of the gay characters develop romantic feelings for Zael. Ah well. Something to keep in mind for next time.

Anyway, thanks for bringing these up, they're super helpful! Sorry for dropping the ball on them :D M:IC will enter the ranks of queer media that can't quite manage to shoulder the load of representing the whole spectrum equally and without flaws haha, like all the rest :> Until there's enough of it, that'll always be the case, and we just gotta keep trying and keep pointing this stuff out and trying better next time whoo!

There's a rare bug in the launch version where if you kill a game just as you start one it can put the whole game in an unstartable state. We've fixed it, but unfortunately haven't been able to update the itch version yet because signing requires getting to an office computer and we're not in the office right now.

So if you run into this issue, until we can update here, I'd recommend trying the Steam version. Sorry for the inconvenience!

Don't be sorry! You're not the only person who's seen it, just the first one, so getting this info is SUPER helpful! I'm really glad it's mostly working otherwise, though, yay!

Yay! Meanwhile, we've repro'd the bug, including the settings buttons not working, so once we get some engineering time hopefully we can fix it for others. Thanks very much for reporting it, and for trying out the hack fix -- knowing that fixed things is really helpful to know.

1) Are you by any chance using a 32-bit OS? (Under windows, you can go to the start menu search bar and type System Information, then look for System Type.)

2) Any chance you could provide us your system specs?

I know you said it's not a huge deal, but we're still trying to get info on this bug, since we can't reproduce it. If nothing else, so we can track it in case anyone else encounters it!

It's real weird that the confirm button doesn't do anything, but maybe it's failing to change the resolution bc something about a vertical monitor is throwing it way off.

I dug a little deeper. If you want to get hacky, you could go into:

...and edit the globalgameState.json file.

What's the "_resolutionIndex" value you're seeing? 7? If it's not 7, try 7! If there's a section that says "_fullscreen": true, try deleting it to get you in windowed mode. Maybe that'll behave better?

Anyway, this is all goofy and not a real fix, but idk maybe you're dying to play? If you don't feel like messing with this I understand, hopefully we can get a fix in soon!

Oh no, that's no good! We might not have tested the game on vertical monitors >.< I'm not seeing an obvious way to change the startup resolution, but hopefully QA/engineering folks can reproduce this tomorrow and come up with a fix.

In the mean time, can you see if it's running in windowed mode or full screen? You can't change the resolution in full screen, but in windowed you should be able to. Then the confirm button might work? (Also, if you can see it, it would probably be useful to see what resolutions it's filling into the dropdown.)

Well, that is a Weird Bug indeed. Hopefully QA folks will be able to look into it tomorrow!

I would love it if this was just a missed button haha, would be a heckin' easy fix :D Otherwise it's probably A Weird Bug(tm) and will take more time >.<

Here's what the end mission screen looks like on my PC, just in case it is something so simple! 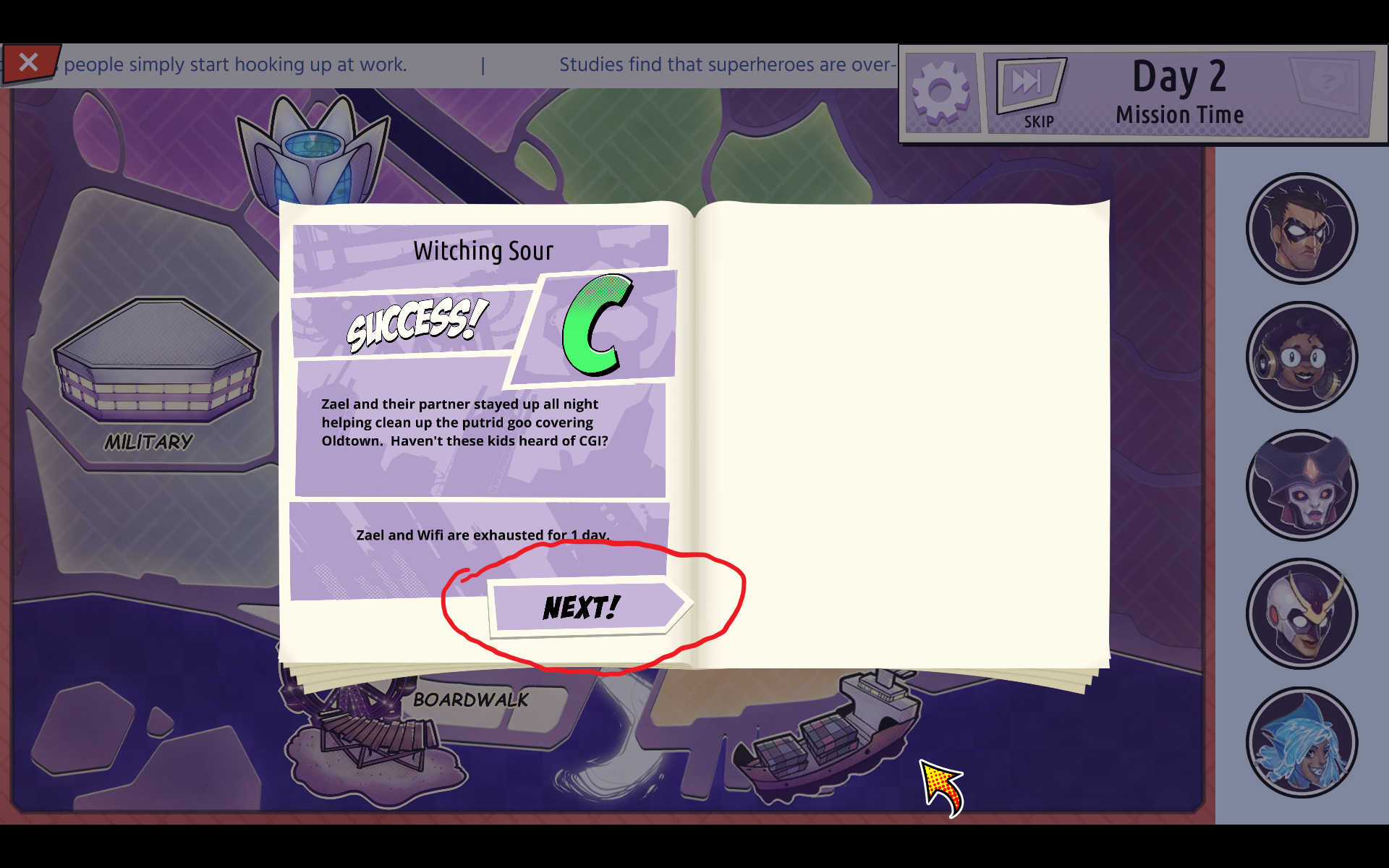 Hi imprexia! Sorry you can't play the game :( Got a couple of questions so we can hopefully get to the bottom of this and get you playing:

I know that's a lot of questions! Just trying to ask anything I can think of so we can hopefully try to reproduce this on Monday when folks are back at the office. Thanks!!