i did it a long time ago with a glitch lol

hey you know mrdrnose, forget 4th and 5th levels. if you wanna just finish 1st 2nd and 3rd levels. then just do that. honestly thats really all there needs to be. as long as you dont quit the game in its process, and do some sort of wrap up, nobody will be mad

oh my gosh... OH MY GOSH! ITS BACK TO THE BLACK BACKGROUND!!! YESSS!!!! MY EYES NO LONGER ARE DESTROYING ME INSIDE!!!

russian subtitles would be good i guess. but more people speak spanish and chinese and other languages than russian

wheres his mask tho

i did that a while ago and it got phonty phonograph.

hmmm let me (a streamer that im watching) investigate

NEW NEWS! MARZIAS LAST NAME STARS WITH A V, AND THEN THERE ARE 8 OTHER BLURRED OUT LETTERS AFTER IT!

theres 2 rooms on the side of the square hallway with the vcr room on the sides. sometimes it spawns on the floor way to the side. i missed the 10th notebook there so many times.

welp im bored so its time to do more ideas:

appearance: kind of chubby, short hair and always a frowning face. after the chase begins, (player gets a question wrong) her appearance will change into a skinny teacher with "growths" coming out of her with a very angry face like mr. mix from the math level.

level layout: you come into the level, then the elevator breaks down. you exit it carefully. then the level will branch into a long hallway from side to side, you entering in the center, giving the player the choice of whether to start left or right. let me give a photo example! 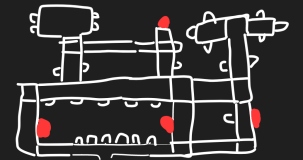 the red rooms are important rooms, ex: head teacher's room, the room where the player dies if caught too much by head teacher, and extra characters rooms.

how the teacher works: she charges at you, but can hit walls and get knocked out for a second, sort of like a character in baldis basics. the more notebooks earned, the faster her charge is. (she will not charge unless chasing the player).

other characters: cathryn clown: she throws powdered sugar (maybe dust) into the players face making them blind slowly recovering their vision. she will return to spawn then come back after 3 minutes. she would look like pennywise but the girl version.

mental mike: a crazy man who has lost his mind trying to escape the school. very slow but if he catches you its automatic game over. he would bring you to his secret layer he built in the walls and burn you alive for the "the gods sake".

how final chase works: all characters know exactly where you are and go at the same speed they usually do. once to the elevator, you have to climb up the broken elevator (mentioned previously) and make it to the biology level.

anyway, this is probably the best thing to do when bored. so try it out yourself, it will be fun.

how he works: works somewhat like hello neighbor in which he has no clue where the player is. if he finds you, they activate the chase where the teacher is at your full running speed for 10 seconds, then returns back to his spawn.

what he says when he gets mad: "This is going to be a terrible night for you..."

how the final chase works: you have NO stamina and have to walk while the teacher is right behind you to the door, but! you have to solve solvable questions along the way. if you get one wrong, the teacher will speed up to light speed and catch you.

randy roach: works exactly like milagros bambi but only spawns after you get 7 out of 10 notebooks.

how you escape: at the end once you answer all the questions, the teacher makes you collect 3 wires around the map, no chase. then you fix the down button in the elevator, go back to strobovski's floor, and escape the school.

thats my idea for biology

edit: i mean i like bought the game again for 5 bucks. if thats even how you donate

oh. it just says hes tired.  give him a few weeks and maybe he will work on it again 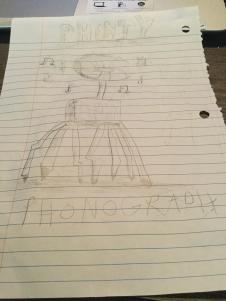 also i was trying to get a picture of this for a friend, was waiting for it to happen before i got a notebook, remember that theres now a weird rat wall blocking the door. so i get a notebook. turn around GET SCARED HALF TO DEATH BY PHONTY LIKE 2 INCHES IN FRONT OF MY FACE and then hastily take a screenshot of it

interesting! i know im a bit late but i do like it

EDIT: not the drawing, the fact that you had jury duty

yes i am eleven, also yeah thats how my teacher said to do it. i agree thats how the game should have it.

this is my first aewvs dream actually. i dont know if it was a nightmare or the best dream ive ever had.

so ima go into full detail on this dream that i had. so i dont remember the start, but im like a school-hotel-funhouse? theres this teacher-receptionist thats like following us and trapping us for us not to get a book? a book im like... ha get rekd i got the book. and then SHE PULLS OUT A FREAKING KNIFE AND STARTS CHASING US? so im like oof gotta RUSH DOWN TO THE FIRST FLOOR OUT OF 10 AND GET THE POLICE  CONVENIENTLY JUST STANDING THERE? so i take the stairs when theres an elevator right there idk why? and i enter some weird rooms where i climb stuff? i never see the teacher person at all but i get to the elevator, make to the first floor, and i say POLICE HURRY PLEASE! also the first floor transformed into mountains and parks? also the elevator started taking me back up and im like NO HELP ME! so the police then start saying THERES A PERSON TRYING TO JUMP! so i jump and i dont die? so then a bus arrives WITH THE TEACHER PERSON ON IT, ON FIRE???? she gets out... and sets me on fire? i die. AND AFTER ALL OF THAT. A MAN'S DEEP DISTORTED VOICE SAYS....

I WONDER WHERE THATS FROM? no joke in the dream, i literally said to my mom... MY MOM LIKE IM LIKE

"mom! its just like advanced education with viktor strobovski"

then i wake up very confused about that dream anyway

Soda works when You use it close to Victor, "door key" is for "punish room" door. And i work on the 10th notebook, other half of map and ending. OH MY GOD THE OWN CREATOR SPELLED VIKTOR WRONG THIS IS INSANE AAAA