Laika
Save the planet with heroic barks!
Lunarexxy
Shooter

Yes, every sound created with this is in the public domain, as far as the CC0 license allows. You can do anything you want.

It still crashes the moment you look down.

There seems to be a minor bug with hovering over the score. The clickable area is too small. It doesn't highlight and let you click it to view your stats, unless you click the very right-hand side of it.

Found a bug where objects dropped on a conveyor will move in the wrong direction, rather than following the conveyor they were dropped on.

The balls should land on the left conveyor and then move towards the left, but instead they follow the path in pink as if they were on the right conveyor.

Try updating your graphics drivers. It seemed to help for another user also using AMD graphics.

If that doesn't help, or if you're not willing/able to update your drivers, this was posted on the Hypnospace Outlaw discord by a developer: 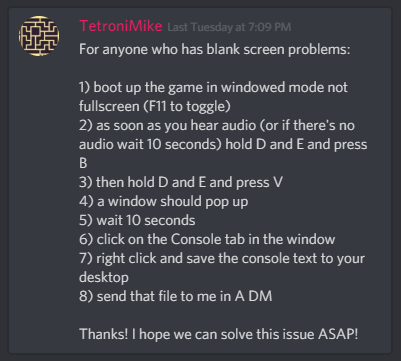 Pressing Alt causes the program to go into a state where it freezes for a few seconds after any mouse movement.

Could really use some faster/skippable text, but that was really good quality for what it was.

If you run it at certain resolutions, things like icons and the taskbar do not line up properly with the screen.

I dunno yet if it's reserved for something else, but something standard like pressing Escape would be a lot more intuitive.

It does. I've been running the example project in GMS2 and imported my own dialogue trees without any problems.

That was an excellent response time! The issues do seem to be completely gone now. Thank you very much!