Hey Oco, I used a lot of your forest assets and characters as intended for a small project called Red Fantasy. The assets are basically all from you and it does a lot of your “intended” functionality. I even had the shield block attacks but decided to take it out due to gameplay reasons. The boss character with the hammer and sword is also used in its entirety, the fight is pretty fun!

Check it out if you want to see your art: https://lucrecious.itch.io/red-fantasy

Hi Oco, nice assets! I'm using all your medieval fantasy ones to make a small game :)

I've been using your sprite sheets but some of the frames are spaced/aligned very weirdly. For example, the jump animation for the character seems to move in the X direction and in the Y. I think this is trying to capture the jump height, but most of the times it easier to program it so the sprite stays in place (like your run animation).

Lastly, it would be a lot easier if instead of uploading strips of frames of the animation, you could upload the frames as individual numbered images in separate folders. This would make them a lot easier to use.

So I noticed you're using Ctrl for many of the modifiers for the shortcut keys in MasterPlan. The problem is that Ctrl on a Mac has different utility than it does on Windows or Linux. Ctrl + Up for example, does not work for me to move tasks because on Mac that's bindded to seeing all open apps. Macs use Command as the main shortcut modifiers. On many apps it's used for Saving (Command + S), it's used for Opening (Command + O) and it's used to select multiple files (Command + Click).  So I think it kind of makes sense to use Command instead of Control, for the shortcuts.

For Apps, it's very typical to have an "if" statement somewhere that uses Commands instead on Control when on a Mac.

Even better would be to allow for keyboard short-cut remapping but that's up to you. I'm cool with the keyboard shortcut setup, I'd just like to use Command instead of Control lol

PS: I started to use MasterPlan recently since it seemed more feature complete after the Maps update, and I'm really enjoying it so far! There's a few QoL things that are missing for me though, like better trackpad support (I know, ew, but zooming is hard in MasterPlan with one, and sometimes the 1-5 numbers don't cut it), and being able to word wrap notes...

I was trying it out on my 4K monitor and the UI is a little small.

Would you consider adding an option to adjust UI size or add 4K sensitivity? 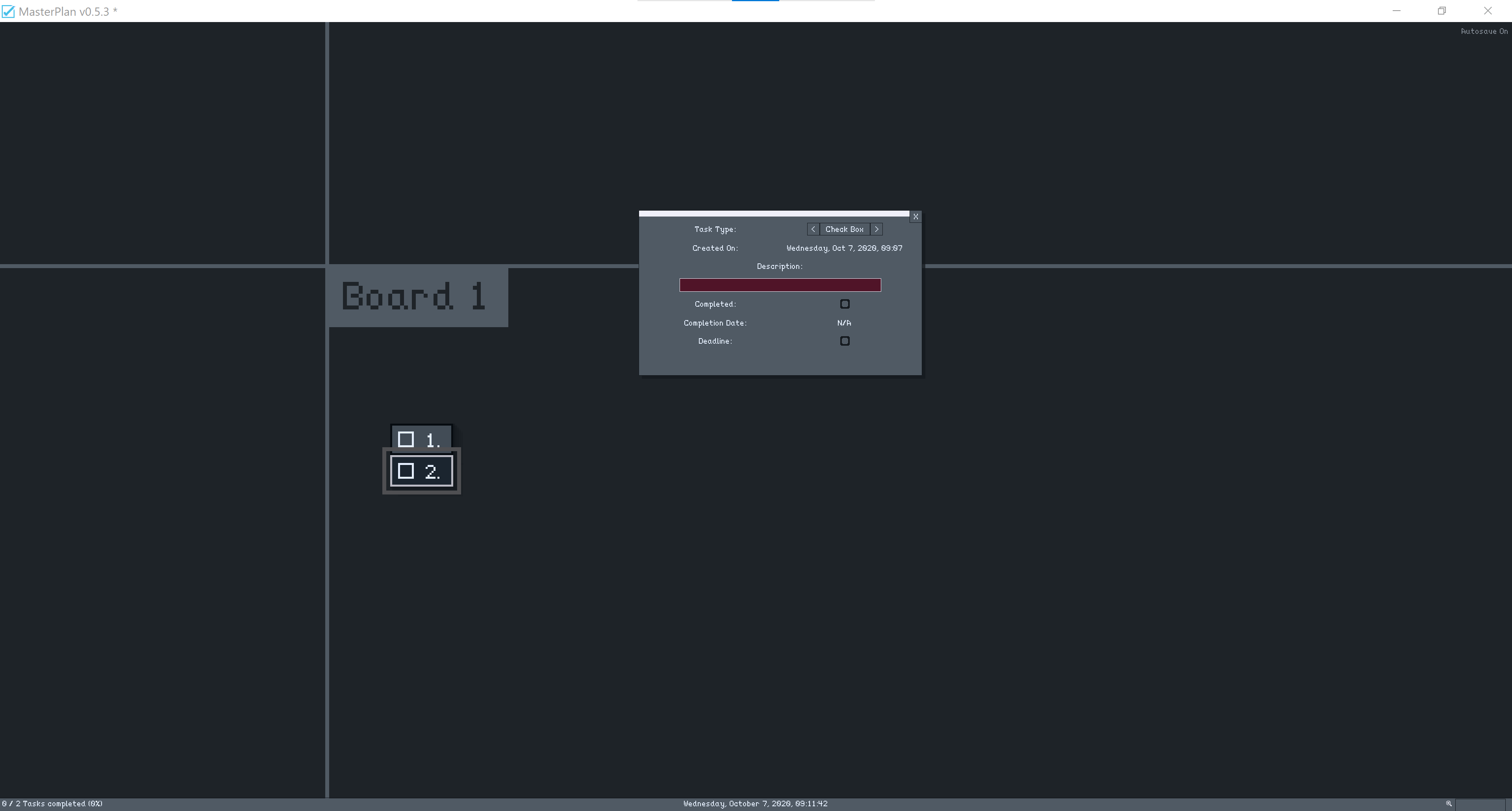 MasterPlan is running fine on my Windows machine!

Along with the text highlighting and text wrapping in task descriptions - which I think is pretty important considering  people will be copy and pasting things from previous planners to this one - an export option would be pretty cool as well. Maybe you can "export" the current screen at a set dpi (higher resolution depending on how far the user zooms out, they can choose how detailed they get or something like that) to pdf.

A note on text wrapping, it'd still be good to be able to have a customization text-description-box size that you can drag to make bigger or small but that wraps the content in the set size. That might feel better than to adjusting the size automatically depending on the context.

Hi Solar, would love to try MasterPlan. I downloaded the current mac version:

While trying to open it through terminal because it wasn't starting if I just clicked on it.

Let me know if you need more information!

I finished Gearend! Not 100% though. In any case, this post contains spoilers.

I really liked the game!

Okay that's pretty much it right now. I should have written the bugs as I played along (I'll comment here about more bugs if I play through the game again, or try to 100% it), but I was mostly just playing the game for fun! All in all, I had a really good time playing Gearend :) All my grievances are rather minor and some are due to my lack of Metroidvania skills haha

Edit: Just wanted to say that I don't expect you to follow through with any suggestions at all, they're mostly there as part of a small "review" and my opinion on certain aspects of the game.

Thanks for a great game, Solar!

^ Same for me! I think it's a memory leak - garbage collection on shorter intervals. I'm guessing some resources aren't being disposed of properly after death.

Fun game so far, it really forces you to explore. Nice.

Anyways, I made it to the Purifier (I think). I don't actually know because every time I try to enter the room (right after the guy who's like, "you're close to the Purifier"), the game crashes.

Here's a link to the error file, hopefully this helps!

PS: I've tried to get to the Purifier on both my Mac and on a Linux (Ubuntu) virtual machine, and I crash in both.

Edit: Just wanted to let you know that I've fixed this myself for the meantime :) (I edited your water.frag shader, and fixed the errors).

So I incorporated a similar fix to rainybyte's - I can enter the game on Mac OSX. However, it's pretty laggy, harsh on GPU and music doesn't play ( only sound effects work). I can't see the framerate, but I'd put it under 20fps. For reference, I can play games like Hearthstone, Shovel Knight, Braid and Undertale on this Mac at full fps.

Since the err.log doesn't really show me much, aside from there being a type error (trying to multiply an int by a float), I can't really help much until I look at this through a profiler (which I might try later).

Anyways, to get it to run, getting rid of the typing conflicts should help?

Edit: So I got around on using a profiler on it. The CPU usage seems to be in the right places (updating object logic and rendering). Instrumenting the game kills my fps, so I didn't play much, took me like 2 minutes to get through the first cutscene lol. For me, the profiler wasn't much help :/

You need to profile the game with a profiler and take a snapshot to see what's taking up the most CPU.

I use Visual VM. Here's a long-winded tutorial I made about it a while back: https://www.youtube.com/watch?v=UFRTSeG2e5c

Hey Solar, so I've played through much of the demo, and I've found a bunch of things I thought might be better to put into one post since most are pretty minor.

I couldn't play the game on my Mac machine, but I also have a Windows and Linux machine to try stuff on. I'm playing the game on Windows 7 on a gaming PC (so pretty good specs).

I'll split this post into three parts: the stuff I liked, bugs and suggestions

Eps controls great (although a little floaty for my taste). I like the music a lot, it goes really well with the art. The shaders are working great. The performance is good on my gaming PC, aside from the minor hiccups from when Java does a garbage collection (you might want to try gradual garbage collection if it doesn't slow down your game too much).

As you might have noticed all the bugs and suggestions are small. As of now, I'd still probably buy the full game just off playing the demo because I liked it so much :)

It's looking awesome Solarlune, hope this helps a little!

That makes sense. Even though Java is cross-platform, I'm betting the shaders compile (or are interpreted) slightly differently on each system.

i.e. float by integer division might be only a warning with a Windows compiler but error worthy in a Mac compiler.

Problem: Cursor is visible in both windowed and fullscreen

Problem: The game is not in fullscreen anymore (windowed mode), but the options menu says that fullscreen is enabled. Toggling fullscreen to off then to on, puts the game back into fullscreen.