Cool, thank you. Hm, "neon" - I like it! Do you think a brightness slider could help with the darkness?

I put it in the dedicated spot that itch has for steam links (More information -> Links), but I guess that's a little hidden. itch.io probably does not want to advertise other shops too much, hehe. Either way, here you go: Steam

Thank you for the kind words! It is already on steam since v1.0

Thank you! I sometimes develop in linux, so it is quite native.

Thank you! SC2 was also a huge inspiration for me and a major leap in RTS history. Thanks for the bug report, I noted it down and will fix it for the next release.

Ok, done! I'd be great if you could make&shared a video of that if you people are having fun :-) And tell me how you like the new map.

First 16 player test game (All bots tho). This is insane. 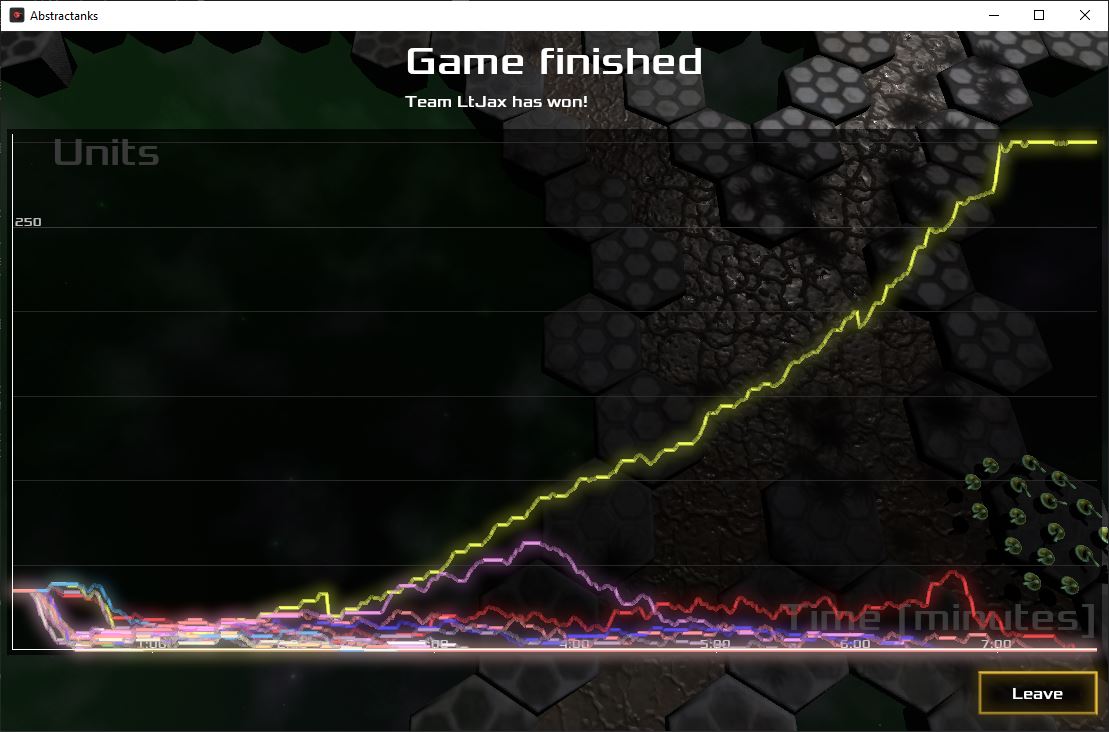 Alright, I'll look into it - but no promises yet!

How many would you want? Basically, I can just bump that number up. I'd have to make sure that I got enough color palettes and starting points and the server would need enough bandwidth.

Seems I actually released a rather severe bug here that prevented the game from starting. It's fixed in 0.36.1!

Hello everyone. Just added a bunch of tutorials to my game Abstractanks, which is an arcade real-time-strategy game with an abstract theme, currently in beta-state. While the tutorials are not completely done, I think they now give a somewhat complete introduction to the game's core mechanics. So I thought now would be a nice time for others to check it out!

This is how it looks:

I've been working on this game for the past years, mostly on my own with the occasional help of some friends. The game is kind-of hand-made: it does not use any big engine, it's just build on a few basic libraries. I started creating this because I wanted an alternative to starcraft 2 , with shorter matches.  The 40minutes+ matches were getting exhausting, so I created something with some depth (I hope?!) that can be played in about 5 minutes.

Since multiplayer games need players, I realized that I either need a big marketing budget or better single-player component to have it grow organically. So lately I've been focusing my efforts on making it fun for single-player as well!

Besides game jams, this is the first game that I released. Any feedback is welcome!

There's a bug in this version where it does not start up properly after a fresh install, because it tries to write a logfile to a user folder that does not yet exist. Workaround: either try to run the previous version first, or create the folder yourself (It's in the error message).

The bug will be fixed in the next release. Sorry for the inconvenience.

Yea sure. I tried joining on sunday after I returned from Global Game Jam, but it said the link was expired. Now it works again - strange!

Hey there - thanks for the interest! Yea, I got discord, but I'm not really well-versed in it yet. Do you want to set up a channel or something there?