Considering this is meant for learning, I would expect the full source code to be available as well. Any reason it’s not?

This looks awesome, and I have a question about licensing. Is this available under a FOSS license?

First off, thank you so much for the encouragement along with your continued support throughout development! All the positive thoughts really motivated me to push forward!

I still believe the second iteration has some potential if it were a faster game; overall it might be better reworked as a platformer since there’s a lot of movement involved. There would need to be some mechanism to reduce backtracking if you forget soil, as I imagine that will get tiring.

One other thing I didn’t mentioned in the postmortem - due to the fact that I had so many ideas it was impossible to cover them all - was I originally planned to have some type of machine shoot out the rocks, hence the name “RockShooters” in the Tiled maps and code for the moles. It just made much more sense to use the moles instead!

The rocks do indeed use the same sprite, just tinted differently for the different types. Some players even thought they were fireballs! I think part of that is attributed to the poor art planning I had for the echidna and moles later on in development. The rocks were susceptible to this since they were made alongside the moles. Good point about 7-B, haha!

While a Maze Burrow 2 isn’t out of the question, I always liked the thought of creating different types of games instead of numerous sequels. My next game may be a different genre entirely.

Thanks so much :D! I hope you'll enjoy it!

First, I want to thank Itch for being such a great platform that helps indie game developers like you and me. I'm extremely grateful for it, and I've had a great experience using it for the past 5 months. As it stands, I intend to keep using it for future projects.

My name is Thomas Deeb, and I'm a game developer from California who's been working in the industry for a little over 4 years. Back in high school, I have always wanted to release my own indie game. Past attempts were far too ambitious and ended up being cancelled due to scope.

With my current game, Maze Burrow, I wanted to change that and work on something smaller that I can complete in a reasonable amount of time as the sole developer. I also now have more insight and experience than before, and I'm determined to keep up my progress and realize my goal.

Designing Maze Burrow ended up being a puzzle in itself. It went through a few iterations: the first involving a Toki Tori inspired puzzle-platformer using simple abilities to collect insects; the next involving a similar concept, except with picking up and placing soil. Neither prototype went well, and there were a lot of issues finding the "fun" in them.

Enter the third and current iteration. I decided to break down the core concept of the game into something simple that can be expanded: place patterned blocks into matching spots to unlock the portal to the next level. Using this simple base, I found it easy to add new elements that I can design complex puzzles with. Some elements include switches, warps, paired blocks (moving one block moves another), and different terrain, such as ice, in which blocks slide until hitting a wall or other surface. Players found the game more fun and satisfying as a result; unlike previous iterations, there is now a clear goal to each level and enough variety to make solving the puzzles interesting.

At this moment in time, Maze Burrow is in pre-alpha v0.2, with v0.3 in active development. I look forward to working on it every day - even after working on games all day - and I can't wait to see how it turns out. If you want to follow its progress or just chat about anything, I'm always available on my Twitter.

Thank you so much for your time, and I hope you all have a great week! Stay awesome indie devs! 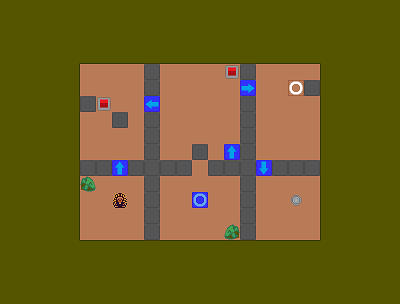 Maze Burrow is a simple puzzle game that involves moving blocks with symbols into their respective spots to activate a portal. You play as an echidna who's had its burrow turned into a maze by moles, and to escape you must work your way around the various obstacles blocking you from activating and entering the level portal.

This game went through several iterations; this is the third attempt at creating an enjoyable, simple puzzle game that is easy to pick up and play yet still allow for intricate puzzle design. For this short pre-alpha demo, I'm primarily looking to gather feedback on the concept and hope to improve the game further with it.

Post any bugs or crashes you encounter on this thread. Please include the following information:

I overall enjoyed Circadian and am glad to see a new EarthBound-inspired RPG in development! The passion and effort put into this game is very clear, and it looks fantastic. However, it's not without its loose ends. I took note of issues as I played, and all of my feedback can be found here.

Keep up the good work, and I look forward to future releases!