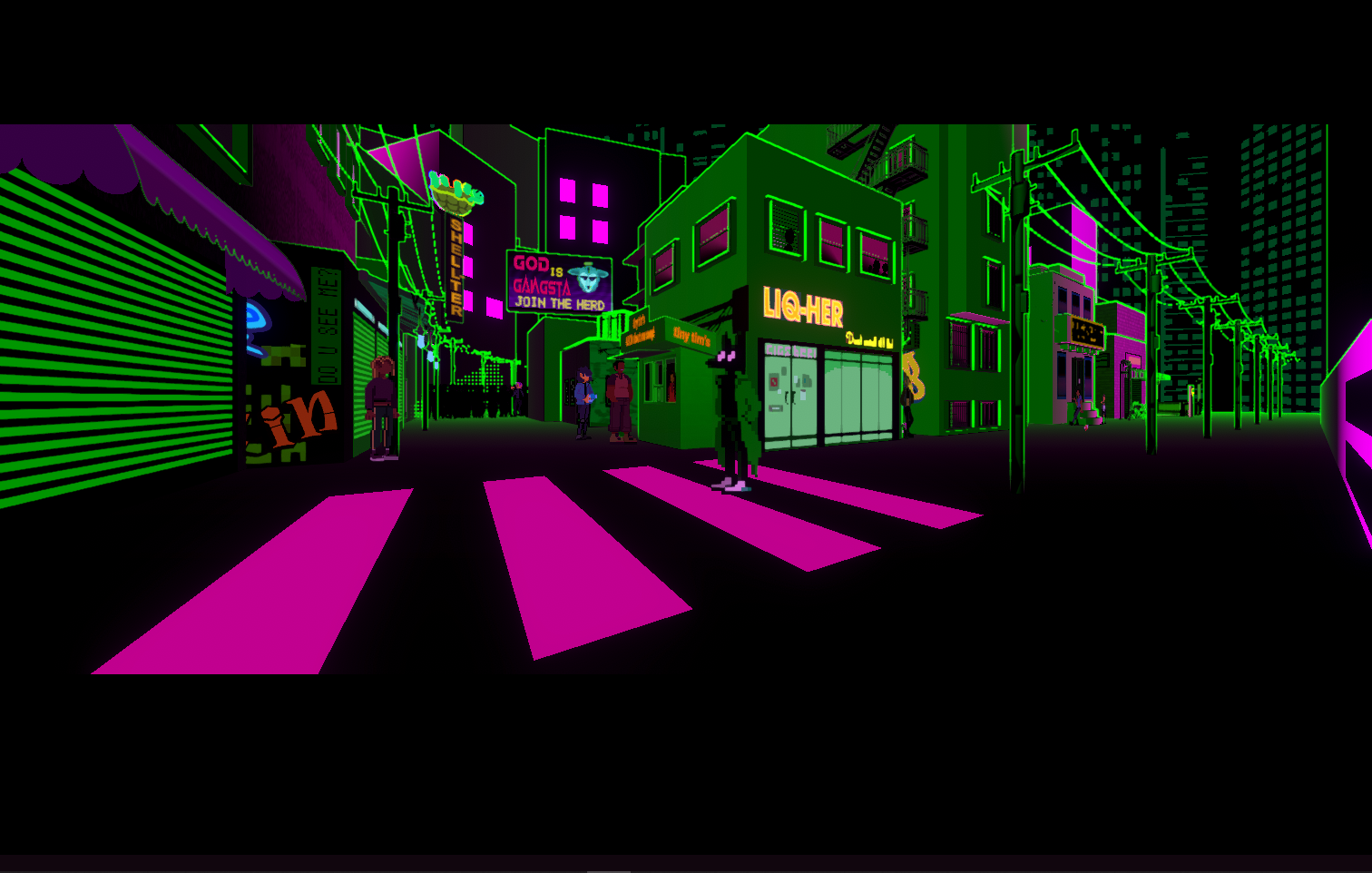 Hello, there! This is an old build from December which acts as our current proof of concept. While nothing in this build is necessarily set in stone, we would love to hear your thoughts and feedback as we continue to iterate on our vision.

In the upcoming weeks, we'll be linking many more prototypes for playtesting, and we would be honored to have your support along the way.

Thank you again for your time! It means the world!

Much love,
The Ponch Team

thanks so much for playing! :)

hello there! im so glad the two of you want to play this together and if you are able, I hope you enjoy! :)

there are two possible branches where the main character v*s towards the end of the game. in one of the branches she does twice. the action itself is not visualized, but there is a short description + a sound effect each time. worms are also involved.

if you want, you can email me at gardenrobot.games@gmail.com and i can pass along the choices you can pick that would avoid the v* scene(s)  :)

There is so much tension in this story and the straightforward writing is so well suited to it. You’ve constructed a very unique tone for the game that conveys lots of complicated feelings in a short amount of time. I’d like to see more of Anna’s voice come through- I think doing so will make the dynamic between her and Karenin more exciting and will also reveal a lot more about Karenin’s character. I also felt like the perspective could get slightly confusing sometimes having switched between first and third person. I think some more intentionality with where these perspectives are placed in congruence with the clickable words/decisions will help clear this up (for example, 3rd person writing in the text blocks while with 1st person writing in the decision blocks).

I’m very excited to see the direction you take with the story- great job so far!

This was a really neat concept- rewriting history through a game- especially how it was embellished with tongue-in-cheek comments from a modern day critic of Liu Shan. The twine format was a perfect kind of channel for this kind of story. Furthermore, the notion of embodying someone from the past and making decisions to either shape their fate or their identity is a fascinating basis of play.

There were moments throughout the game where I felt lost about where I was or who was speaking, and I think this could be improved by conveying a sense of transition between scenes or thoughts (different text colors, breaking text blocks across multiple pages, etc.) Additionally, some of the choices were a bit unclear (such as yes vs. no) and I think conveying some more detail about these decisions would make them feel more active.

You have a memorable writing voice which provided a vivid image of this nihilistic dystopia. While the white text on black background is common in twine games, it felt like a purposeful choice here and really highlighted the themes of your game. Your intentional approach was very poignant, especially with the clickable words, which nicely broke up story beats by appearing in the beginning, middle, or ends of sentences (especially the ‘RESIST’ part!). Sometimes I felt that the larger text blocks could have been split up a bit—I occasionally had to scroll up and down to reach certain parts of the story which interrupted my immersion in the game.

Additionally, the MC’s dynamic with Mana was enjoyable to read- they were a fun pair to follow and their dynamic alone brought forth a lot of interesting, passive details about this weird world. Fantastic job!

Your take on frat-ifying Gatsby was very fun! Your writing really carried over the characters well into this new vision of the story. Nick’s personality as a kind of average joe student and his wonderment as an outsider to the party scene was quite relatable.

I enjoyed how you allowed the player to seek more detail by clicking on words in the text blocks, and how these extra details could shape the tone of the story. This particular moment: when Nick walks into Gatsby’s house and realizes they’re the only one with an invitation— the bewilderment that follows worked both with or without knowledge of this extra detail which was a clever way of creating small, but compelling branches in the story.

Great game so far! Super excited to see where it leads.

The way you have opened the story is great. Having been immediate thrusted into conflict was exciting and is especially suited to a retelling of a story like Robin Hood. Your writing is very clear- you do a great job of describing all the moving parts (characters, decisions, side conversations) in a way that was cohesive and thrilling.

Including the choices in the text blocks themselves was powerful- every decision made me feel like an active agent in the story. I can’t wait to see where this game goes!

Wow- I really loved this whimsical game. The playfulness with the fonts, text fade ins, and sudden cuts was so fun to watch, and was thematically effective as a retelling of The Little Prince. The different cuts, pauses, and text placement was so compelling and exciting to read. I particularly loved the “follow the crowd” loop, where it continued to repeat until the player waited for the “Go home” link. There was a moment in the beginning where thought the game was over and almost exited, so I would suggest cutting this pause slightly to avoid the risk of someone leaving the game preemptively.

Your sense of humor is fantastic. I loved the calendar and the social media scrolling, and I think my favorite part hands down was the “jobs” in different font. What a neat way to bash the capitalist machine!

Your voice is so strong, and it paints such a fascinating picture of this world (pun intended!) I love how sassy Dorian is- I felt very much like I /was/ him, and I thought all the different choices and reactions were enjoyable to explore. The different allusions to painting and through allegory and metaphor really served well to build up to the final moment of the game.

The story itself was paced well, but I felt that the way it was structurally conveyed through twine came across as a bit repetitive- I think varying the text, choice placement, and breaking up text blocks would accentuate the writing and add some visual excitement . The use of red text was a great example of this.

I honestly don’t know much about Dorian Gray, but playing this game really makes me want to check it out! Great job!

I really enjoyed the psychological horror direction you took with this! Especially in the ways you conveyed it subtly through distinctive descriptions (ie. The smell of the rabbit’s den, his bulging eyes, etc.) before building up to more literally terrifying events. Considering the fact that this is a public domain work, I also thought the meta approach you took with Adelaide vs. Alice was a clever way of adding to the horror elements by breaking the 4th wall.

Since this game involves continuing the story by clicking words at the end of sentences, I would suggest informing the player with some sense of continuity by ensuing every clickable word is significant to the following line or the story at large. For example, in the beginning, some of these words are “bloody”, “in London”, “a butterfly” which are enticing to click on. But later on, some of the clickable words are “long stride”, “pleases” or “from there” which are less descriptive of the possibilities to follow.

You have developed such an exciting world, and I can’t wait to see how you decide to conclude the game!

Fantastic, evocative writing. I was really blown away by how you implemented contrast in clever, understated ways- in color, in text movement, and in voice. (For example, Ishmael’s small blocks of separated text vs. Ahab’s big monologues. The colour you chose for the background is cool and calming, and the blood red text offers some enticing contrast- like blood in snow). Not to mention, the short pauses/fade ins/ fade outs provided some exciting drama to the twine format.

The ending felt ever so slightly sudden- I wonder how you could have used the “close your eyes” mechanic you used throughout the game to really hit home the sense of hopelessness that this very contemplative and logical person is defeated by. Perhaps if the final line could come about in a similar way that Ishmael reached all other conclusions in the game, but it was the only choice available?

I totally adored the Lovecraftian vibes from beginning to end. I never would have thought of Moby Dick as a cryptid, but it was a brilliant direction to take, and you constructed such an exciting iteration of the original story.

The format you chose for the text and choices was captivating- it really felt like I was literally unravelling the story every time I chose an option, and also subtly conveyed a sense foreboding that was well suited to the gothic horror narrative. Don’t be afraid to lean into this a bit more stylistically— for example, adding in some pauses of different lengths and fade ins/fade outs in different story beats would really heighten the drama in an exciting way.

There were a few moments when the setting changed that I felt a little lost- like I would forget when we were in Chicago vs. New York. I think some fade ins/fade outs or some other small visual cues would help convey these shifts.

I’m personally obsessed with The Gay Gothic, and I think your story was a fantastic take on queering Frankenstein. That one scene where Victor was talking with Beth and said “There’s something I have to tell you…” At first, I thought he was going to come out to her and then he ended up confessing about makin’ a dead guy! Really loved this game and the parallels you drew.