In the past few days I have been working on the level design of the game and we have conceived and implemented the Journey mode. It consists of 12 levels and will take you around the philosophical journey of life doing what you must do in the game, Type the correct letters using the mental rotation and spatial transformation abilities of your brain.

The levels vary in difficulty and the puzzle type. Though primarily its the same (transformed letters). The design part is not yet complete. Need to add some achievements and complementing elements. A way to measure player's performance and certain motivators to make them want to progress through the journey; apart from unlocking the next step and the philosophical note.

Apart from this we will be working on another game mode which will be time based endless mode. Giving players a different perspective of the game. Multiplayer is also on the cards but at a later stage. But paramount for now is the graphics of the game. Right now the look and visual aesthetics are just at a prototypical stage and isn't appealing at all. We need to decide overall colour palette and the graphical style of the game.

Here is a small video showing a glimpse of various levels.

Do let us know what you think of this. :)

The design phase for the game is in full swing. I am trying to decide on different level variations and player abilities. The only interaction that the player will have with the game is through the keyboard. The entire focus would be on the core mechanics. This is my first foray into minimalistic design and I hope to pull it off. The timeline for this project is around 3-4 months.

Reflections is meant to be a word puzzle. A typing game with a Twist, where players are presented with transformed letters/words (mirror images, horizontal and vertical transformations) etc. And they would need to type the word correctly using an on screen keyboard(in case of mobile) or a physical keyboard (in case of PC).

Here is some of the initial rough design I wrote on paper. (Pardon the horrible handwriting) The overall look and feel of the game is supposed to be very relaxing. I aim to give it a zen like feeling with the visual and sound effects.

Also i managed to implement and test the core gameplay on the mobile device. It comes out to be good but still a long way to go. Watch the short video below.

I will be updating the devlog at regular intervals with the progress I make on this game. Please share your thoughts in the comments section. Would really love any kind of C&C.

Announcing our next project – Reflections. Its a minimalistic word puzzle game which will test the player’s spatial transformation and mental rotation abilities. A typing game with a TWIST. The idea occurred during a flight where I tried to read a text on a cup which was placed upside down. Learnado da Vinci used this technique of mirror writing to journalize some of his works. Though its believed he used it as means of encryption (which is quite lame) there are also references that he used the technique as he was a left hander and did not want the ink to smear as he wrote from the left to the right (makes more sense) .

The game will be released on mobile devices and PC. It will contain single player and multiplayer modes.  Stay tuned to get a detailed view and exclusive coverage of the development process.

Time for another update about the progress we have made on HitMe. Its been close to a month now since the first entry and with the festive season done and dusted; we would like to show you what we have been upto.

We are pretty much done designing the various levels of the game. At least the basic mechanics and much of the look. There will be around 21 levels including 3 bonus levels. Each will pose unique challenges but with the same end goal. Hit the cubes to score points. Here are a few screenshots of some of the levels. 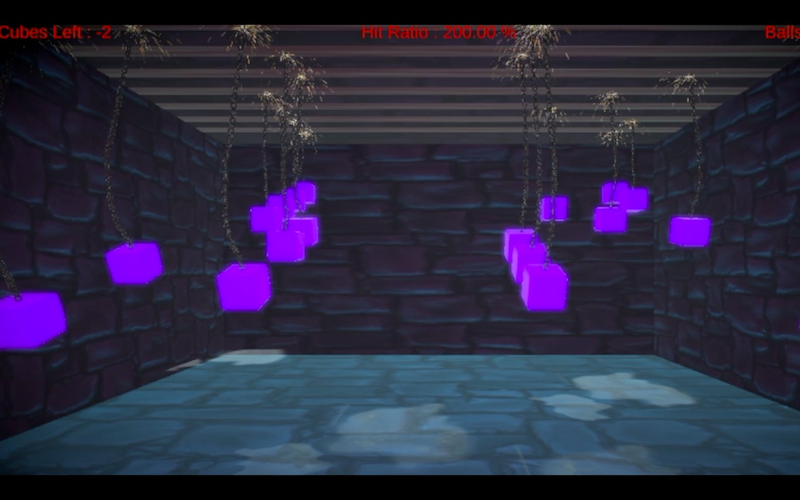 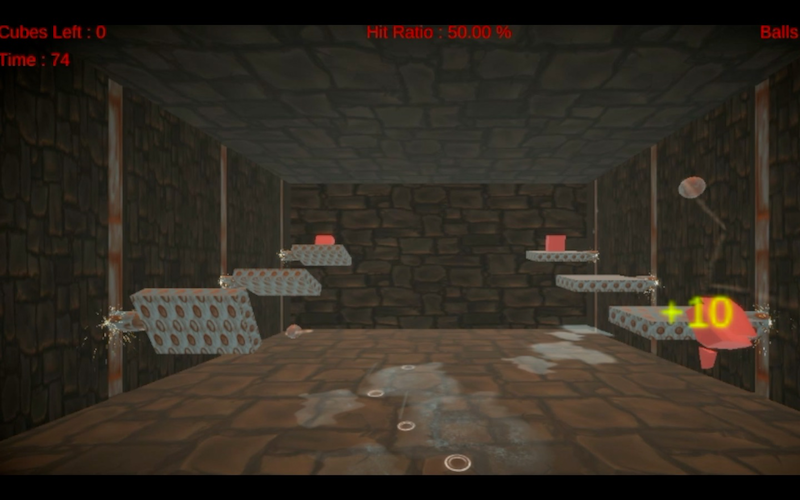 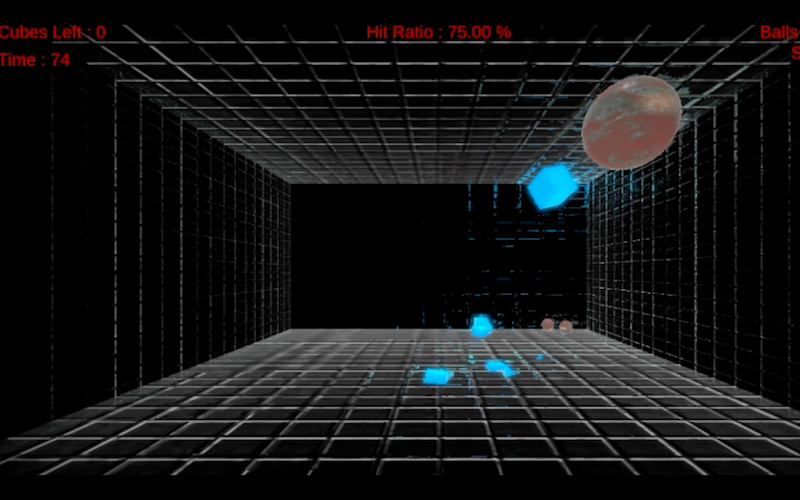 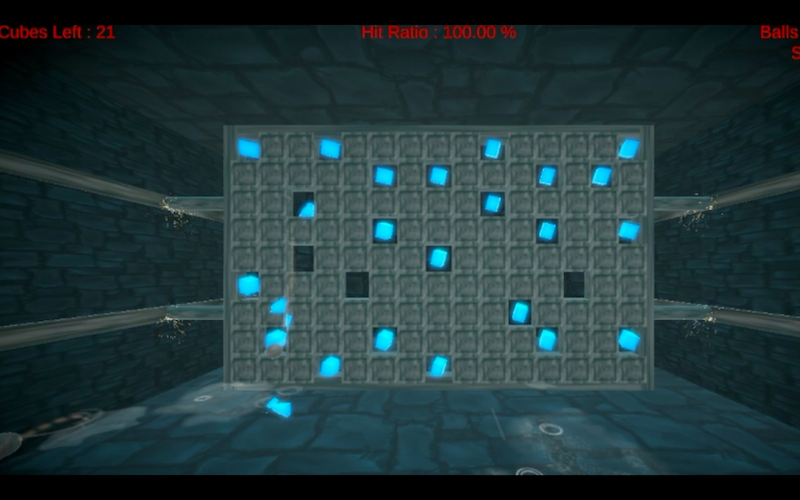 We thought about giving the game an overall dark theme. Self illuminating cubes with the environment and other props to have a dark or slightly mellow feel to it.

There is still an awful lot to do. Most importantly optimization, both in terms of performance and build size. The video above has been recorded on an android device around three years old, running 4.4 and you can see a bit of lag and stuttering with uneven frame rate. Fixing this is our top priority in the upcoming days. It runs fine on the new android handsets but we want the game to run on as many devices as possible. Also the main player object, the ball, is yet to be finalised. Would love to hear your thoughts and suggestions on how we can go ahead creating the look and feel of the ball.

Stay tuned to find out how we took care of the lag and optimized our game to run smoothly on low end devices. The next article would be about it. Any kind of feedback is greatly appreciated.

Thought about creating this Devlog series for our upcoming game HitMe. I will be updating the progress of the game and look for your constant feedback during the process to improve it. Also this might be useful for anyone who would want to follow a game development process closely. I will try to keep this a mix between technical and non technical aspects. So here it goes.

After our first release Rig’s Dream, we thought about creating something casual, a no-brainer kinda game with just one touch control. And after a few brainstorming sessions, the idea of HitMe was born. The core gameplay mechanics would be to hit the objects with a ball. Thats simple,huh! So we quickly got down and made a very basic prototype which was something like this.

After playing this a few times we found that it was fun to play and pretty simple with a player just tapping anywhere on the screen or just flicking to throw the ball. It was then decided that the game should contain various levels where the cubes will be governed by the laws of the physics and each level should pose different challenges to the player albeit keeping the gameplay simple. (See it; Hit it). We also decided to keep the game in a closed area. i.e the X,Y,Z will be fixed and the game will take place inside that area. Below is a very early alpha version of the game.

The ropes are made using line-renderer, and the cubes are primitive Cube shape from Unity. A simple sphere takes care of our ball and the throwing script is attached to the main camera. Now was the time for some actual hardwork and get the levels polished and looking good. Below is the video of couple of levels in the beta stage.

This look was achieved using PBR, Particle effects and Unity’s Post processing stack. However there is a lot more to be optimised but this got us going and we were satisfied with the look. Apart from the interactivity between the ball and the cubes, there is also some details to the environment and interactivity between non playable game objects as well.

We are now working on designing the other levels (both technical and art). The art part will get a bit easier as mostly the environment will remain the same. Lets see how it goes. I will be updating this blog regularly with the development process.

Please feel free to comment, criticize, motivate or provide any kind of feedback. You can also give your suggestions if you want to see something in the game and we will try to put it in if feasible. Stay tuned for more updates

Experience the amazing journey of Rig. As he travels through different worlds in his dream, making words out of letters around him & fighting the witch to wake up again.

Bored of casual games? Endless runners without a beginning or an end or any real purpose? Come try your hands on Rig's Dream.Try something hard, something that will engage your mind, something that is new and different. Challenge yourself; It is a lot more fun!