They sink once your feet touch sand, or rocks that you can stand on in the water. They can occasionally sink when disembarking in the water but usually they will allow you to jump off, have a swim/collect some items and then jump back on. Just don't touch the land. Big Ships like the Frigate or Galleon can be used freely and will not sink on disembark. They can still get stuck on land though so make sure to make the Big Ships your home so that you respawn and can keep using it without buying a new one.

Hi! Not a virus and nothing to worry about. Left over file which helped handle Steam Achievements. This has now been removed in the latest build V1.4.4. Thanks!

Hey! Thanks for posting these. Will have them fixed ASAP. Sorry for delay in response. Never saw any notifications for these.

Just curious. Did you use Cheats so that you could have BED as an item? From memory, those were removed from the game and can only be used with cheats. Unless I've just forgotten who you can get one from.

EDIT- Found the issue. You were not supposed to be receiving a bed once you bought the land title. I also fixed it so that if you already have the bed as a separate item, you should be able to remove it freely now in the next build. Will upload soon. Based on your interactions with the house builder, the price/sequence can be a little different. It seems in one of the branches, the player would still receive the BED as an item. Other issues posted have been fixed also.

Reply
Isolation Story community · Posted in So what is here for the bundle owners?
Elushis50 days ago

Hi! The game was available for free to all just before it hit Steam Early Access. The itch build has now been updated to reflect the Steam version and has also now become paid. Bundle owners should be able to download the game/updates without having to buy again so please check out and download the latest build and let me know your thoughts.

I take it both builds run with lag for you? Would you mind sharing your specs please.

Hey again. So I've been looking into what might be causing this and haven't been able to replicate the crash yet.

Do you by any chance remember what bed you were using?

EDIT: Had you also placed any decorations?

Unfortunately, the only customization visually is an outfit which you receive once completing the game. Originally you were supposed to be able to choose between a female or male but ultimately it had to be scrapped. Maybe in the future but no guarantees. I think there's a clip of the female pirate in the very first trailer released.

I'm going to plug my other game for a second though (forgive me) just in case you'd be interested in the future...you can't choose gender but there's a ton of visual armor/clothing options. Including dresses.

You can play an old free prologue/demo here:

After The End: APOLLO (PROLOGUE)

Full game here: (Tons of armor/clothing to mess around with)

After The End: The Harvest

Hey kaeldrak. Thank you heaps for posting the bug + screenshot. I'm not sure if I'll be able to look into it today but I'll have it fixed by the end of the weekend. These sequences are dreams. This is now the second report I've received of some of the dream sequences having issues.

Your game will have been saved when you rested regardless though so no progress would be lost.

Awesome! Glad it's playable now. I made a few changes which aren't present in the Steam build. I updated the NW.JS files as well as a few other small things. Steam Achievements are operating through an older version of NW.JS so I'm suspecting that it was causing some conflicts when the game is running stand-alone on itch. I will try and fix up the Full-Screen difference between the two versions soon. I just wanted to see if I was on the right track in diagnosing/fixing the issue. Any other issues please let me know!

Run Game.exe instead of NW.

Please let me know how you all go.

Hi! Sorry for the issue but thank you for sharing. I have just uploaded a new build. Please try downloading that one and let me know if it improves your situation.

I think I may have figured out a solution. I will upload the updated build in the next hour. Please let me know if this fixes or even improves the situation for you.

I think I may have figured out a solution. I will upload the updated build in the next hour. Please let me know if this fixes or even improves the situation for you.

I just posted this to Neko but will just paste it here as well in the hopes that it makes some sort of noticeable change.

I'm looking at the itch build as we speak and am unable to replicate the issue as of yet. I'll keep posting suggestions though in the hope that one of these things may correct whatever issue is occurring.

Do you have Vsync enabled inside your Graphics Card Dashboard/Settings? If so, could you try disabling it? I noticed that having it enabled drops the FPS noticeably for me.

I'm looking at the itch build as we speak and am unable to replicate the issue as of yet. I'll keep posting suggestions though in the hope that one of these things may correct whatever issue is occurring.

Do you have Vsync enabled inside your Graphics Card Dashboard/Settings? If so, could you try disabling it? I noticed that having it enabled drops the FPS noticeably for me.

Ahh you're right! My mistake about Kyyyte. Leave it with me and hopefully I'll have an update for you all soon.

Could you try one more thing if that's okay/possible?

I know it's difficult with the FPS issues but would you be able to try and leave the MUTINY ISLAND REGION?

You can leave the region a few ways but the simplest is either stealing a raft in the ocean or crafting one using Wood, Cotton and Sturdy Rope. There's also a stationary raft which you can use SOUTH-WEST of MUTINY ISLAND. Jumping off a Temporary Raft will make them sink so keep that in mind. Grab the RAFT pictured below and leave the map edges to be taken to another area. If possible, try and head EAST or SOUTH.  WEST will more than likely get you killed as it's the more dangerous route. 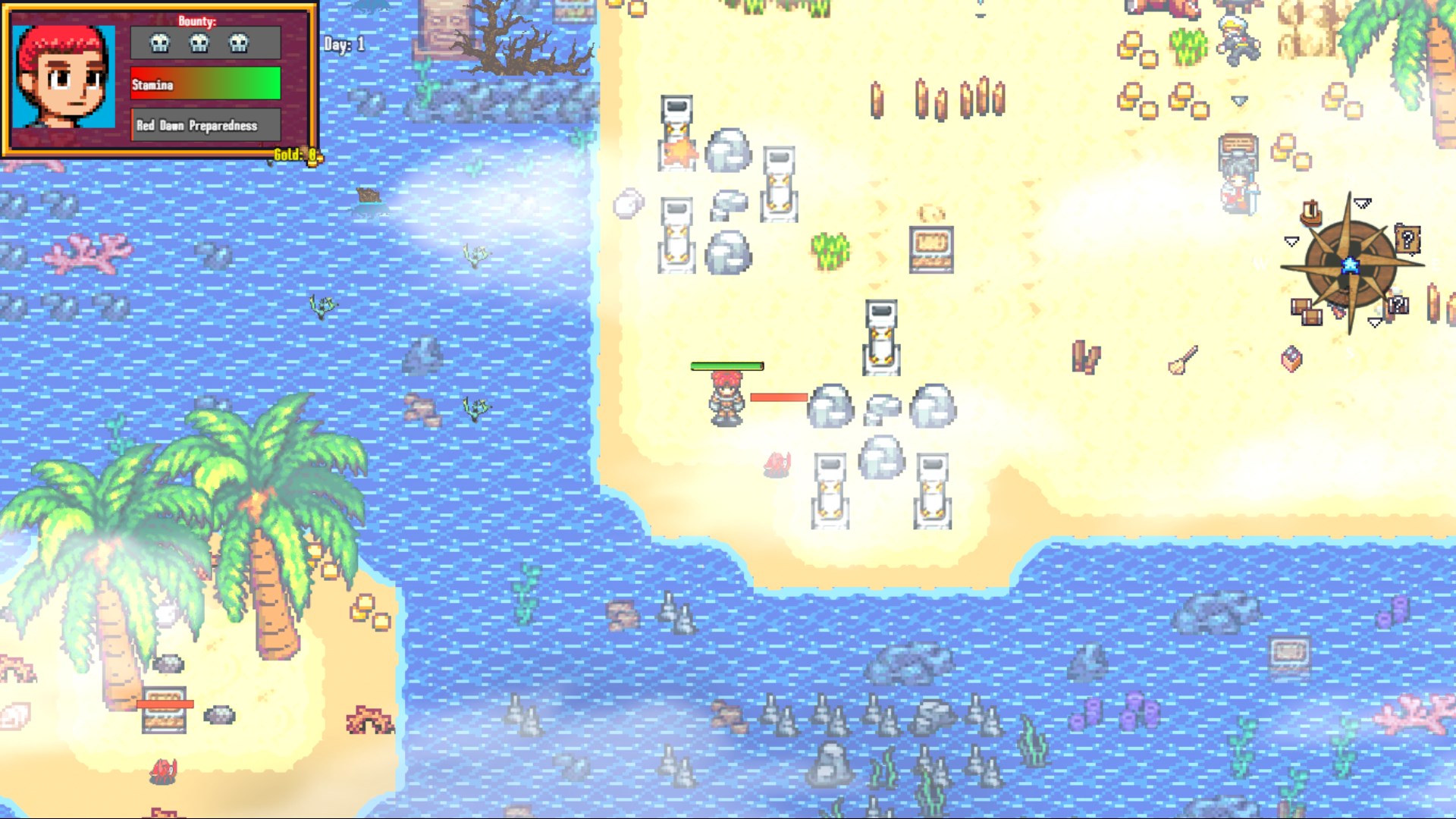 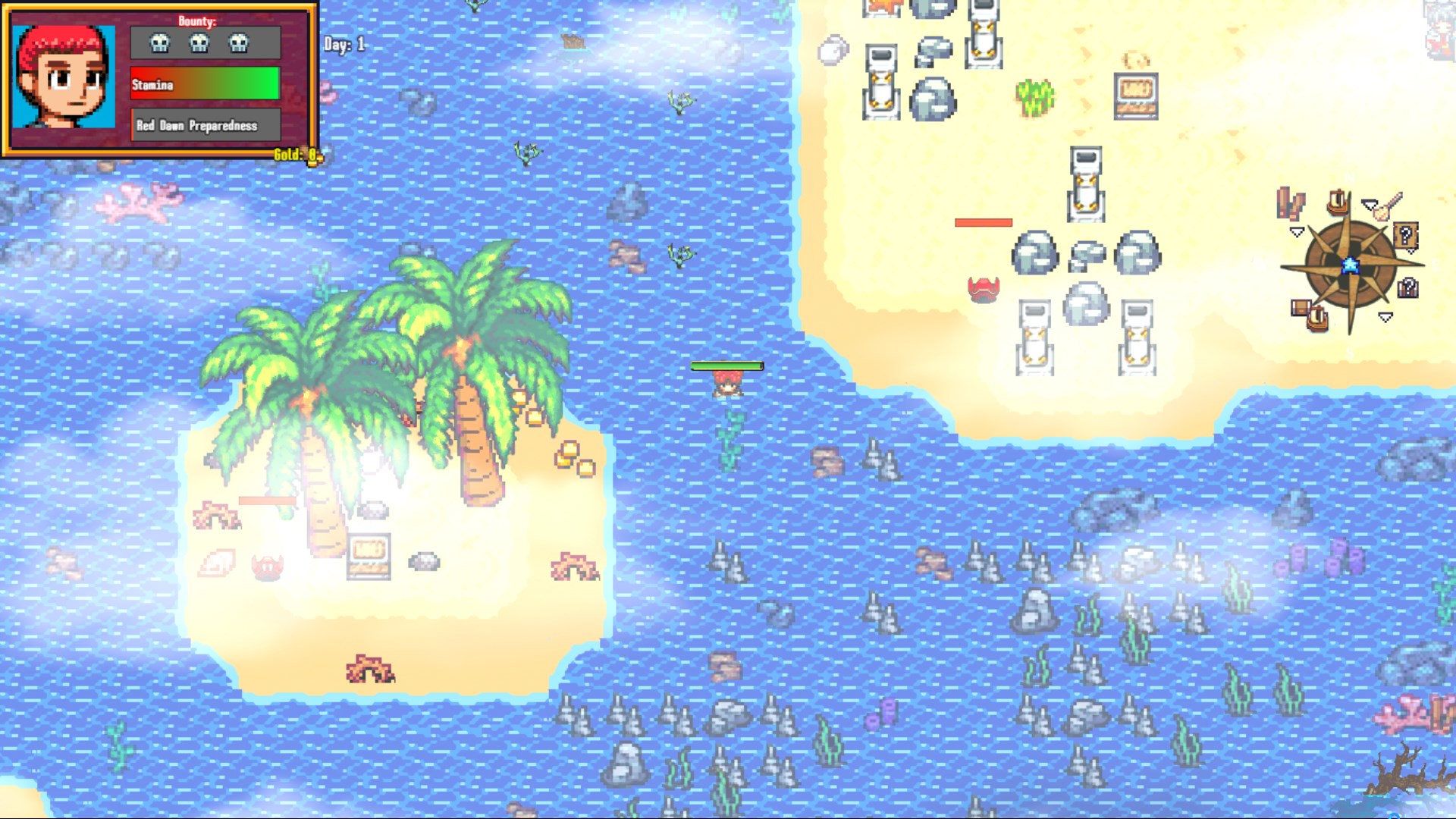 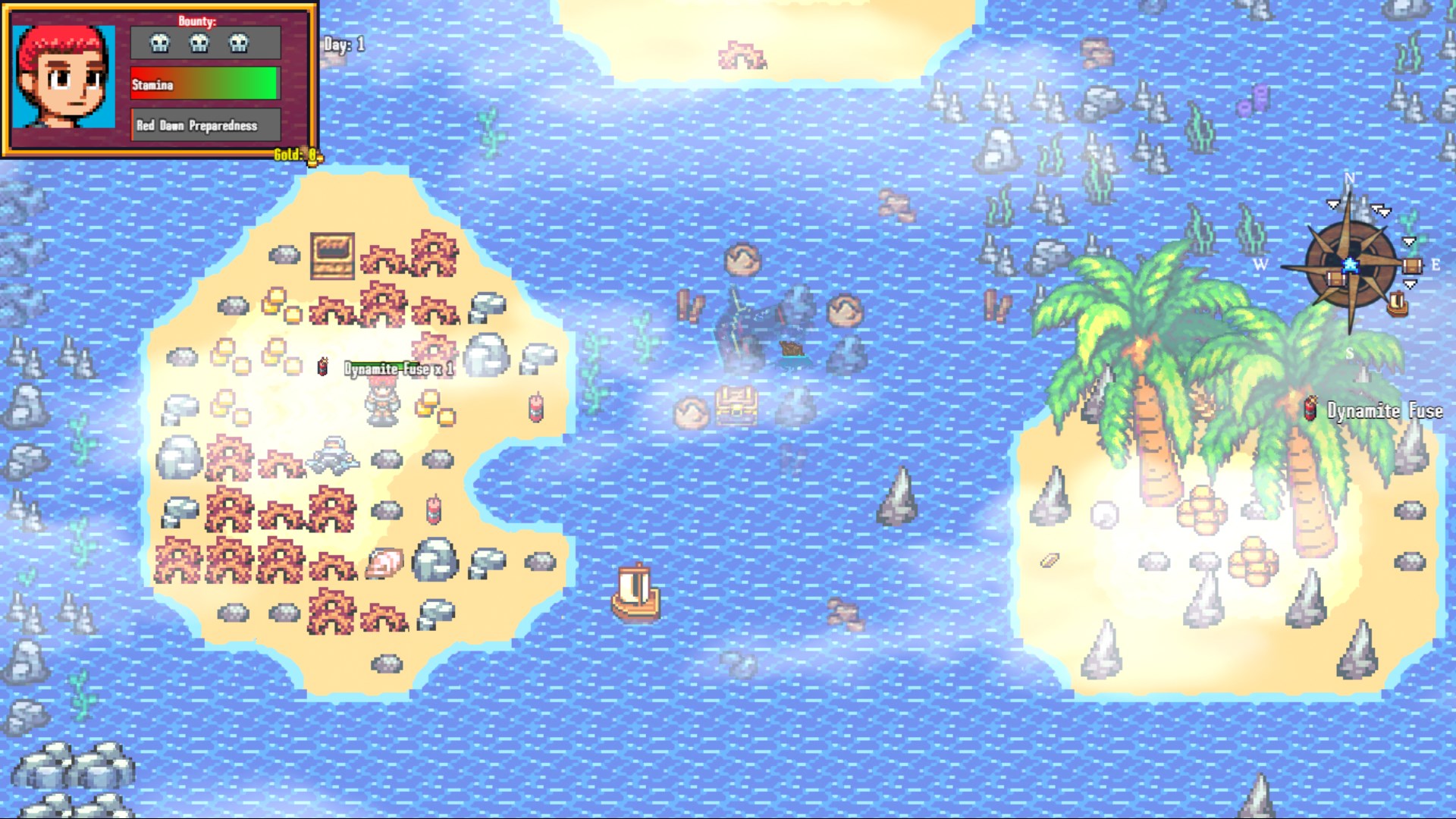 In the meantime ANYONE who encounters this issue please continue to post your details in this thread.

Working on it at the moment. Hopefully have it ready by the end of the month. I'll let you know when it's available.

I see that you both have an AMD Card. My rig is NVIDIA. It could potentially have something to do with the AMD Drivers although the game was developed originally on a computer using AMD Radeon 5700 HD and FPS was certainly nowhere near that low. Very strange.

I've had a few people message me privately about other aspects of the game so this issue isn't happening for everyone which I guess is good overall but makes it a little harder to localize whatever this specific issue is.

Is it possible that an anti-virus program is flagging the game in some way?

In the main game folder there's a file called "Package.Json". There's a line there that says "chromium-args": "--ignore-gpu-blacklist",

Could you try deleting the part that says --ignore-gpu-blacklist

Usually it's recommended to add that command to help with performance but I'm just curious if it will improve your games performance at all once removed instead.

I'll keep looking and thank you both for posting this issue.

Very strange. Thank you for the response. I'll keep looking into it and let you know if I find anything. (The game is able to be completed in FREE MODE also)

Thank you for providing the specs. Indeed you should not be running into any FPS issues with that sort of rig. There's a few Let's Plays and general gameplay videos floating about the internet and you'll see that those FPS issues aren't present so I have to assume it's something more localized. Leave it with me and I'll see what I can find.

If anyone else runs into this issue please post it!

All I can recommend at the moment is maybe checking if you have any conflicts between your Graphic Drivers, DirectX etc. Sometimes just updating drivers can correct issues like this. If you've only been using Windows Updates, there's a chance your OpenGL and WebGL drivers could be out of date. Updating those could potentially fix your issue. If you're using a laptop and it's running on LOW PERFORMANCE trying plugging in the power cable and see if that changes anything.

Just lastly, do the FPS issues occur if you enter the game in FREE MODE?

Hey kyyyte! Would you mind sharing your specs? There's been a handful of reports since last year of some users experiencing low FPS. Lowering the resolution is usually the easiest way to gain additional FPS. Is the low FPS occurring even when the game is sitting at the title screen? Please let me know when you have a moment. Thanks!

The game was originally developed on old-ish hardware and even then FPS would hover between 40-60. On my current hardware I retain complete 60FPS as seen in most of the trailers. 5FPS is strangely low so there must be something else going on which is causing the drain.

Great idea! Count me in.

I'd like to submit one paid and one free game.

Just a reminder that BOTH files must be downloaded in order to play. Once you have installed Crash Landed.exe, place the Game.rgss3a file in the install folder and you're good to go! Thanks everyone