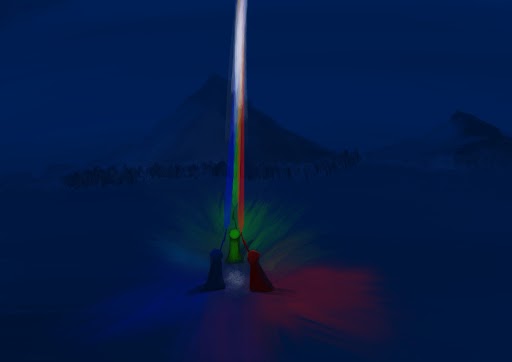 I'm working on a concept for a combined text-based and 2D visual multiplayer game. For the text component, I am looking at the source code to Federation 2 as the core engine (C++ based). The XML level format is relatively straightforward, but many of the scripting components are a little outdated. I'm considering the single-player Inform authoring engine, but that may be too ambitious for just one weekend.

For the graphical component, there is the Tiled Map Editor and WorkAdventure. To get the skeleton started, I'm aiming to compile tilesets and maps based on the six "stock planets" from this list:

The original Multi-User Galaxy Game used the concept of hyperspace "links" to connect and group player-created content, a couple years before the first release of the Hyper Text Transfer Protocol. This concept is about the previously unknown wizards who use their Light Wands to build and maintain the portals for interstellar travel. The magic system involves three simple classes: Red Wizards, Green Wizards, and Blue Wizards. Creating a new hyperspace portal involves three or more wizards, all modulating their magic intensity between 0 and 255. (Well, that's how we'll *program* the system, but the player shouldn't need to know this level of detail.)

The body needs sustenance, and this morning I am ingesting a popsicle while I write this. I credit any personal growth in my writing (ha!) to my work on getting in touch with my circadian rhythm. But for one to eat, one must cook -- or at least hunt/gather. Fortunately we live in a society with an abundance of food preservation technology!

And with technology, comes learning. With repetition, proficiency, then craft... frequently trade, and sometimes art. I'm told that serious cooking school students spend the entire first month on eggs. Break a few, make an omelette. Lather, rinse, repeat. Can I learn to do that with my writing? Can you?

Of course there's a fandom page for Mental Poker

Please join me as a contributor to my Erdős Jam team: Project DECK™. I'm looking for participants of all kinds: whether you want to learn about mathematics, write a new sketch of a proof in cryptology, or interact with the process somewhere else in between.

Goals:  Give people the space to learn and grow in the way they want to. Come up with some good ideas for a possible result for publishing.

Stretch Goals: Foster team building and self-guided study at the same time. Encourage people to grow, but don't push them too hard. Invite as many newcomers as possible into the mathematics community!

Joining the Team: If you are interested, please join the Jam on Itch, or comment here, upvote this thread, join the SCUPPER™ Discord and post there, or any combination of the above!

Thanks! Do you mind if I direct the Discord folks to try playing your game, and directing them here if they offer feedback?

Thank you for posting this, Josh! I'm updating my spreadsheet now to let my contributors know to post their itch usernames.

REMINDER: Get consent on naming anybody / attaching their username to your itch project. (Thanking speakers is fine.)

Good morning, folks! The conference proceedings are complete, and my brain is too full of ideas to know where to go next. Maybe yours is too, or you need a break for any number of other reasons.

Today we are having a party, for some writerly definition of partying, in a world currently overrun by fascism. There are more details on get togethers and activities in the #after-party channel of the NarraScope Discord. So if you please, take the time to come say hello, play some of the in-progress games we're testing, or a variety of other self-organizing social activities.

Speaking of organizing, for some of us, the break to take today is from our regular lives, to go protest. Or donate money to a bail fund. Or educate ourselves about what is actually happening in the world right now. I want to thank Judith Pintar for her talk Tuesday morning about the history of play and norms (and red-lining and protest): https://www.twitch.tv/videos/639214041

Some of us really do need to throw ourselves into work right now. If working on a game helps right now, our community is here to support you today. However you spend this Friday, in another sixteen hours, you will still have a full 3 days to start and finish a small game, or become a contributor (play testing counts!) to an in-progress project.

Thank you, all of you, for being here.

Welcome to the Game Jam. We're excited to see what you come up with. Please say hello on our Discord if you haven't already. We'd love to hear more about your experience developing text adventures!

Would you like me to create a #game-jam-archipelago channel for discussion on Discord?

Some Game Design Ideas (technically constraints) -- from the Inform 7 Bootcamp. These suggestions/challenges can be adapted to Twine or other platforms.

1. "The Power of a Good Map". Design a game in which the story unfolds ONLY through the player's movement across a map. You will have to early on communicate to the player that their only available action is to move in some direction, so they don't get frustrated trying to do other things. The story must advance only through movement. No cheating by sneaking advanced code into the game. Only rooms and room descriptions allowed.

2. "Going Deep Instead of Wide". Design a game that takes place all in one location. Every attempt by the player to navigate away should be blocked. The story should unfold through the player's examination of objects, which reveal other objects. Make every object in the room scenery – nothing can be takeable! You use your room description to start, and after that the description of objects that are in the room to refer to other scenery objects, which in turn contain descriptions of other objects. You should somehow indicate to the player that the only appropriate action is examining. You can't stop them from trying other actions and getting default responses for them (we don't start altering actions until tomorrow), so you need a narrative solution to get them to leave stuff alone, and only examine it. No cheating by sneaking advanced code into the game. Only object descriptions are allowed.

3. "A Good Old Fashioned Cooking Game". Design a game that takes place in a kitchen. Players should be able to take items, put them in and out of containers, open and close doors, turn devices on and off, and of course, eat things. Write a win condition and a lose condition. You may want additional player actions (like mixing or baking), but try to constrain yourself to these limited actions. The challenge here is dynamic object descriptions, changing them based on a condition.  No cheating by sneaking advanced code into the game. Use only basic tutorial elements of the tool/platform of choice.

4. "And Now for Something Completely Different". Spin this Wheel twice. Design a game that matches the themes/genres you were randomly assigned. Make a new set of players actions not typically seen in your average work of IF. You will have to find a smooth narrative way to introduce these actions to your player. The rest of the game can be anything that you like, just so long as the narrative centers around your new actions – they should be essential to the plot, rather than decoration.

5. “May I Help You?” Design a game that features a deliberately frustrating conversation in which the speaker is slippery and doesn't want to answer the questions. Clues to what the player can ask should be hidden in the conversation itself. Never leave the player without something to ask. This is different from the frustration that arises from failing to write enough code to create responses for everything the player might reasonably ask. Come up with a compelling narrative that explains your character's reluctance to disclose information to the player.

6. “You’ve got an hour.” Design a game that lasts exactly one hour – 60 player turns (not counting out of world comments or errors). Do your best to make that hour exciting. [Editor's Note: Inform 7 simulates in-game time as one minute per turn/command entered. This does not mean it takes an hour to play.]

7. “Add to your Collection”. Design a collecting game that requires the player to collect some unusual kind of thing, some of greater and lesser quality and desirability. Add NPs who randomly have some of the things that you want. If you want it to be a treasure hunting as well as trading game that's okay too. Make sure you create a game world where this obsession makes sense.

8. “Not your Mother’ Alexa”. Design a game that simulates a chatbot which has a narrow knowledge framework. Making a frustrating chatbot is not the challenge – coming up with an engaging storyline in which the mechanic of the conversation makes sense is the real task.

this sounds fantastic! since i'm a novice Inform7 user, would you be open to walking me through an example? how would i make it so that i can't pick up a pencil, until i pick up the paperclip first?

(many of our participants might lean on Lesson 7 from I7 boot camp to figure this kind of thing out: https://wiki.illinois.edu/wiki/display/PBD/Inform+Tutorials+7%3A+Lists)

Please join me as a contributor to my Game Jam team: the team designing the game jam itself. As a member of the conference organizing committee, I'm responsible for organizing the game jam overlapping with the NarraScope 2020 Online Conference. I'm looking for participants of all kinds: whether you want to write new narrative games, read new narrative games, or interact with the process somewhere else in between.

Thanks especially to Katherine Morayati for proposing a Conference Game Jam, and this year's theme. (and an even bigger thank you to katherine for volunteering to help moderate the game jam.)

Goals: Create an enjoyable game jam experience for anyone interested in NarraScope. Give people the space to learn and grow in the way they want to.

Stretch Goals: Foster team building and self-guided study at the same time. Encourage people to grow, but don't push them too hard. Invite as many newcomers as possible into the narrative games community!

Joining the Team: If you are interested, please join the Jam on Itch, or comment here, upvote this thread, join the NarraScope Discord and post in the #game-jam channel, or any combination of the above!