When you buy the game, it sends an email.
You use that email to link you to the download page and get it from there.

Yeah. I am aware of that pesky bug.
Thankfully, I fixed it, but I am double checking some stuff before I post the new demo build.

Thank you, thank you! I hope you enjoy the full version!

Yeah. It doesn't have a Linux version at the moment.
Though I may eventually add one.

At the very least, a Linux version would be much easier than a Mac version.
Though, if I do decide on a Linux version, I'll have to do it after the next sweep of updates and translations.

So it may be a while, apologies.

Yes. Other than that, coins have no other purpose.

If you are a streamer, or someone that wants more information on the game, you can go here to download the kit used to make thumbnails, or learn more info on the game.

Basic Press Kit uses and all that.
The page itself also has a good bit of the information, and all of it is included in the files.

If you see anything missing, or something you think would be a good addition, I'd be glad to add it!

Survive the horrors of the unknown as you expand your lands to keep from being dragged into the darkness;
and devoured by that which lurks inside.
Every time you make an action, the world around moves forward too.
So be strategic in your choices, and be sure they are worth it.

A Steam release is also coming!

If you have any suggestions for the game, feel free to post them here!

If you find any bugs or glitches, or something that just doesn't seem right, feel free to post them in here.

Images and a short descriptions of what you were doing help the most in fixing these!

Reply
Lost On Jupiter community · Posted in The Progress of the Journey!
Devious_Oatmeal350 days ago (1 edit)

Original Date: 12/11/21
I have now put in the Depositories to hole excess minerals, as well as a place where Miners will automatically go to store their minerals.

Reply
Lost On Jupiter community · Posted in The Progress of the Journey!
Devious_Oatmeal351 days ago (12 edits) The first movement and placement of shroom-trees.

The addition of parallax and the first appearance of the Dark Factory!

The addition of the booster!

The first time you could place down a structure. Non-functioning, of course.

No animations or effects- just purely pressing a button to make a bot appear on a Fabricator!

Original Date: 11/24/21
The first of the animations when activating the Fabricator!

A show of how long the forest could get!

The first iteration of building structures! It was originally a little scanner beam.

Diegetic UI on the jetpack added!

Original Date: 11/28/21
Changed the scanner to printers because the scanner builder didn't look good enough and looked even worse when building the turrets.

The Overdrive module is added to speed up building!

Finally added in a change to the background and seeing how the Factory looks during attacks!

Original Date: 11/29/21
Added the visuals and options of selecting which robot you could build!

Turrets were finally added! Getting closer to that combat!

Original Date: 11/30/21
Combat has finally been added! Though... It was much more brutal than I expected it to look.

Original Date: 12/1/21
The enemy could now destroy you back!

Water had finally been added!

The first iteration of a title had been created! 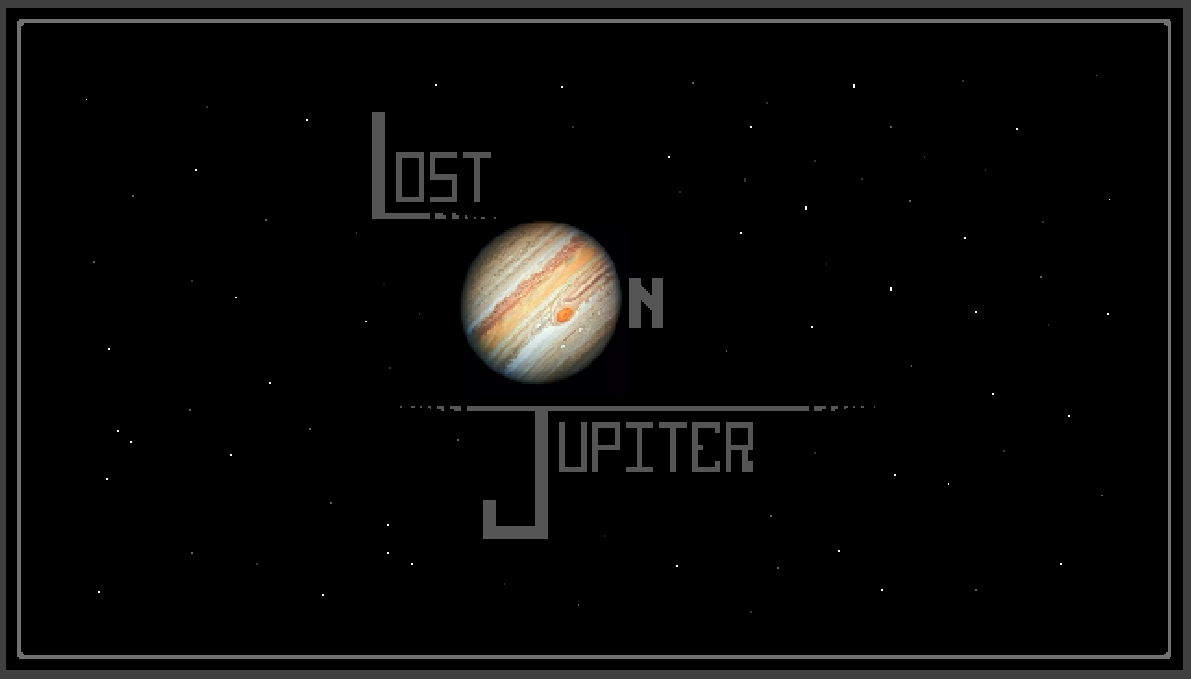 Original Date: 12/3/21
I was messing around with some settings and code, then stumbled onto this look for the water!
It made it look so much better, and I still am not fully sure as to how it works.

Original Date: 12/4/21
This was when the first playable version was shared!
And immediately after seeing the first playthrough, I saw that I needed a tutorial of sorts.
That's when Navi-gator came in! 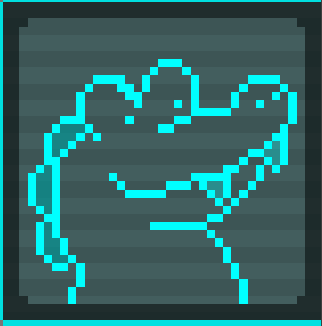 AND, his little dialogue box!

Original Date: 12/5/21
The first art of the Minashrooms was shown! 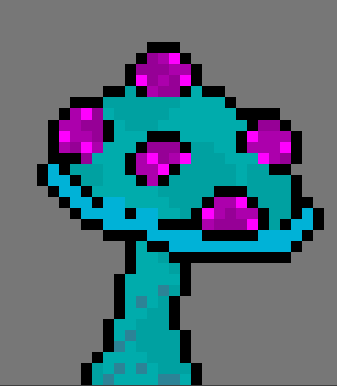 As well as the Laboratory! 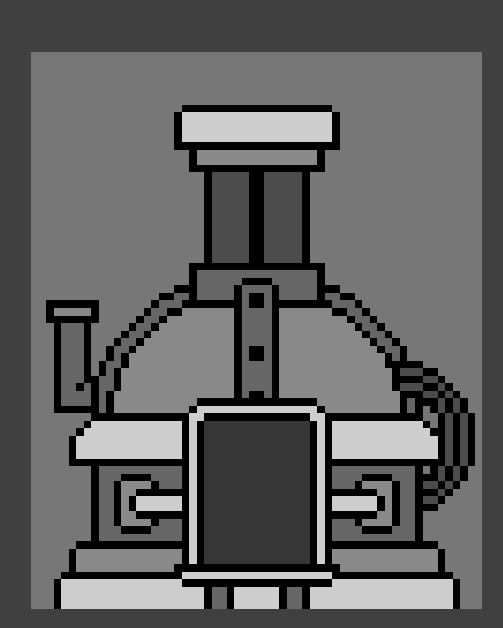 The mushroom trees were then changed to look better!

And the Minashroms were added!

Original Date: 12/7/21
The UI for selecting the science and structures was iterated upon a few times, but this was what I eventually settled with! 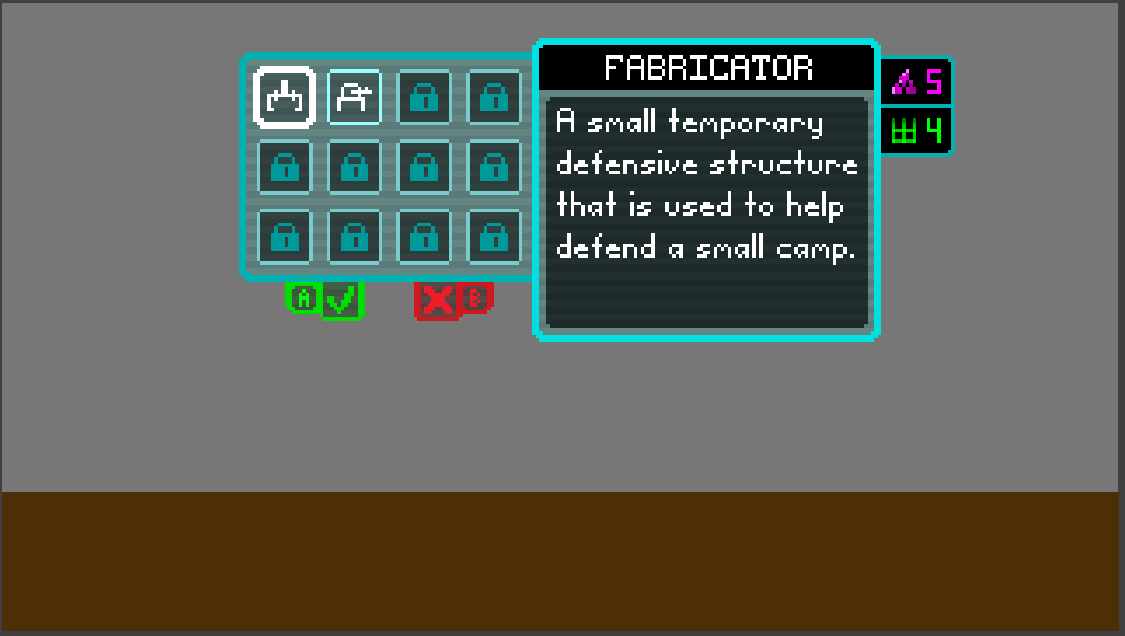 Original Date: 12/8/21
The pause menu was added, with an additional option of silencing Navi-gator.
At first, he would talk after every restart, which would become overbearing after having to hear it every time.
So as requested, and for my own sake when testing, I added in the pause and silencer!

I then started working on structures being damaged! 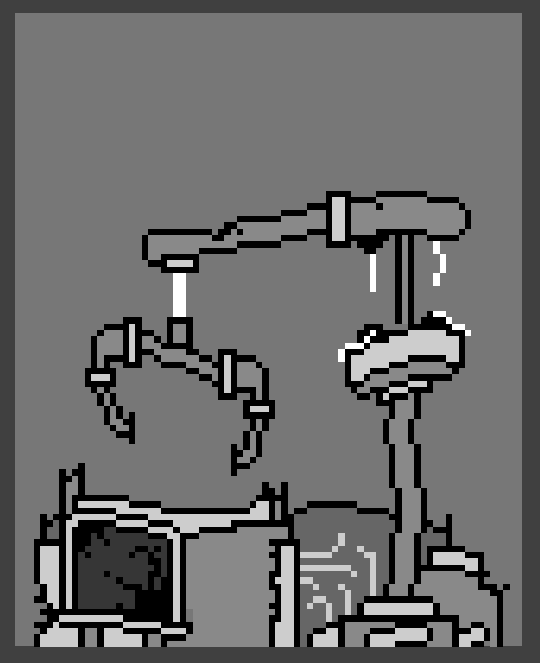 And then finally added in!

Original Date: 12/9/21
For a bit of fun, I added this lil' fella as a secret option!
It is from a fellow dev's mobile game "Jump Jerboa", and I highly recommend you try it out!

Original Date: 12/10/21
The spawners were now being worked on so that the Truffles (Name for the enemy species) didn't just fade in at the edge of the forest. And then a slight improvement on the art! Reply
Lost On Jupiter community · Created a new topic The Progress of the Journey!
Devious_Oatmeal351 days ago (1 edit)

This is where I will post all the smaller updates of the game; with gifs and explanations on what I am working on!

If you want to comment at all on anything in this post, feel free to make a new topic!
Then tag/title it as a response to this to make finding it easier. Or don't. I read all these comments anyways. lol

That means a lot! Thanks!

This is a list of almost all the possible things I may add. None of these are promises, as scope creep is a very real thing.
It is more a list of things I want.
But if people want certain things more than others, then I will gladly focus on those other things.
I am also being a little vague about them in order to give a bit of a surprise.

I can add them being able to mine at night. Shouldn't be an issue. This is now on the to-do list!

I ran into the double-paying for the miner yesterday. I just fixed it with the newest patch.

The game was heavily inspired by Kingdom, yes! 8D
One of my top 5 games of all time, truth be told.

I ran into some of the "out of bounds" errors too. I think I fixed them for now. Pesky bugs! :V

The turrets I may rework. Or rather... the issue is that they actually do fire faster with each upgrade. But the max level (if I recall in that version), is 20, so you barely feel the difference. There is one, but it's small. Might just make it a flat, like, 10 to make it equal to a level 5 change. That way you feel the difference much more.

As for going toooo out into the forest, I need to put a wall there to keep players from going there. Since the game is in an extremely early stage, I haven't added things like that yet. But don't worry! Lore and other mechanics will be placed there eventually.

xD Yeah. I know exactly what you mean.  I'll work on a simple pause menu with an option to disable the tutorial right now.

"Once per turn, you can add a MATERIAL from the field to your inventory."
I had thought of it being able grab any card, but it was too strong.

Might use that for something else though, but in a more limited context.

That's a bug. Thanks for pointing it out. Fixing now.

Cool-cool! Apologies for it erasing your messages earlier. Didn't notice that putting it in this mode would erase them.Easier to keep track of stuff though. Thanks for letting me know!

Your input is valuable, and will be used to help shape the game even further.

Feel free to post any sudden bugs or glitches here- screenshots and copypastas of errors are extremely helpful!

Should be fixed now.  I hope you enjoy!

Reply
itch.io Community » itch.io » butler · Posted in This is beyond irritating [error: unexpected the]
Devious_Oatmeal2 years ago

The spaces is what was causing the issue, which was my guess but I had no way of knowing for sure- which you mentioned Dark. It also explains why I was getting an error in an even earlier part of the directory when I was trying different methods.

But yeah. It went through on the first try with the quotes and the full directory without having to change anything.

I don't know if y'all have a way of letting them know, but as someone that has never really messed with command lines, the quotes thing should definitely be in the documentation. Basically what Dark said, but maybe with that empty bullet point, right after [directory], like the examples.

Thank you both though!

Reply
itch.io Community » itch.io » butler · Created a new topic This is beyond irritating [error: unexpected the]
Devious_Oatmeal2 years ago

This is what I type:

And I only keep getting the error [error: unexpected the]

I've also tried putting in the complete directory, but I still get an error that's similar. [error: unexpected "word"]
And it also gives me the help, so I am sure the initial setup is good. I just don't know why it won't take that as a command.

Here is where you can say whatever you want in regards to future additions and development!

If you have any questions or comments, feel free to post them in here!

I mostly meant in the summer since that would be the hottest time. But heck. Why not both lightning storms AND fires. But when I say it starts a fire, there would be some sort of sound cue as it starts to heat up, then, if the player doesn't douse it with water in time, it grows. the whole raft won't go up in flames though. I mentioned that the lower floor is safe since it is actually touching the water.

Yeah. The game is fun, but for only those few moments in the beginning. It is lacking a LOT. It's a good concept that shouldn't be held down to the current state that it is at, or anywhere near, for that matter. I am not saying it should be some gold tier kind of game, but it has potential to be a good fun game for longer than an hour; which is about the time it takes to do everything. Maybe 20mins if you're familiar with the game. Where it's at right now is good. It's free, and with the nameing of the price for the buyer, it lets people try it to see what it offers. Later on, they should charge, but it is too bare-bones to have a real set price for it.