Thank you, I appreciate it!

Ah this is just a jam game with one shoddy level, probably not worth deleting stuff for. But I'll see about taking a screenshot tonight

Thank you! :D I actually also changed the spawning in the update since that bothered me too when I finally tested it. Though now that I'm thinking about the fixed values, I wonder how the combat feels if I randomize the speeds a little bit, so every fight needs at least a little figuring out... Will have to give it a try!

I might also change that the timer pauses for battles now that it's all a bit faster, or at least set to seconds away from shutdown once you've beaten the whale.

As for the bomb screen, that was the first version of combat I submitted to the Nokia Jam last week. It was sort of an auto-battler that you could only help along with the bombs in a pinch (pretty much the Assassin's Creed fleet minigame, only bad and boring :D) but I didn't manage to finish the game at all, there's not even the whale in it. If you wanna see it though, I've saved that version here.

Anywho, thanks for your feedback!

No you're absolutely right, I didn't get around to testing my guesstimated values, and of course there's also a bug where the next ship doesn't actually improve your stats :D I'm fixing that right now and will have a look at the progression while I'm at it

It's indeed a bit of a mess. It's kind of an auto-combat that you can help along with bombs, but yeah, it's not very interesting or fun. I actually redid that completely for the Dying MMO Jam version, if you want to have a look at it.

As for Dragonruby, I'm not so sure about it either. It was fun to play around with something new, but there's a whole bunch of stuff that it either can't do or goes about it in a weird way, so I'm not sure I'll be returning to it.

Playing right now :D I'm wondering though if I hit a few bugs, because the professional training doesn't seem to work? It feels like it has about a big a fail rate as self-training and the fee doesn't get deducted (but I'm also not sure what it does exactly, what being circled means or how it affects the game).

The other thing I noticed is that the hours on the working horses don't seem right, it will often say it'll return in 0h, but then it takes 3-4 for them to actually come back.

Otherwise, the only nitpick I have is that I wish when I backed out of a menu, that I returned to the previous one, not back to the farm screen from where I have to open it again, that would make navigating a bit easier. And maybe a little icon next to the horse's name in the selection screen that I can see which one is there and which isn't without trying to open them all and see if they're here right now.

But yeah, it's a surprisingly fun gameloop, kinda reminds me of the kind of games we used to have on our graphing calculators in school, so I'm enjoying it greatly :D

Wow, I just quickly wanted to check it out and got stuck playing the whole evening and actually can't wait to fire it up again. Truly excellent work!

Thanks! Yeah I kinda got sidetracked doing the fun but unimportant stuff like visual flourishes or making a minimap and ran out of time putting the actual game in :D

The original idea was basically that you're trying to hunt a white whale before the MMO you're playing shuts down, so you battle other players and level up until you're strong enough to defeat it. Maybe I'll make it in time for the Dying MMO Jam that part of that was inspired by, but I'm already getting lost in the next fun-but-useless coding exercises, so we'll see :D

Huh weird, they all work for me. Maybe a region lock thing? Are you getting any particular errors in the browser console?

This one yes. The follow-up we have on Steam is a more traditional point&click adventure though.

These are symbols for transmasc and transfem. I found them back in 2014 though, so I'm not sure if they're still used

Yeah that can be a bit confusing at first. They are frozen for three enemy turns, the first one being right after you cast the ice spell. So for the first frozen turn, it doesn't move at all, and then two more turns where it only has limited movement. After that it's back to normal, but you can refreeze at any time to bring the count back up (careful with fire though, that'll thaw it right away ;) )

If I may add my 2 cents: I don't actually disagree with you there. The first few levels still give you a bit of slack so you can familiarize yourself with the way it controls, but around the spiders and especially the graveyard level, the gloves come off, so to speak.

The game is very focused on strategy, and a particular approach to it at that, so after the first stage, using that strategy is mandatory to advance. I know that comparison is all sorts of tired, but it's a little like Dark Souls in that sense, there's a particular way you have to play or you will die. That includes a lot of trial and error until it finally clicks, which some people get a huge kick out of and some are left frustrated by.

Here's the good news though: Once it does click, you'll have a much easier time. You'll get more spells and upgrades, which opens up the options on how you can complete a level, and by the end, you'll probably breeze through, not because it got any easier, but because you mastered its way of thinking.

Me, I love it. I mean, I should, I'm one of the developers, but I wasn't at all involved with the design, so I had to figure out what the heck Hackenstein was doing there myself. I do get a massive kick out of that though, but then, I also debug for fun, so what do I know :D

I'll upload the other version when the jam is over. I tried a couple things to get a satisfying yet playable progression, but in the end nothing felt as good as just not having one. I don't know, there's just something about how obnoxiously simple it is :D

I also think that there's just this sweet spot, where it's small enough that it's dumb and annoying, but not so small that it becomes too frustrating (at least for me :D)

Noice! Now you only gotta do that a thousand more times to unlock the achievement!

That is one stressful, trippy minute! I'm curious though, what's the purpose of the little dots following you? Aside from getting in the way now and then, there didn't seem to be much of a bonus or malus to saving/losing them?

Man, those goshdarn triangles... Nicely done! One thing though, even after playing it for a while, I'm still not quite sure how the buffs work or which does what exactly. At the same time, it's a fast-paced game and when things started happening, I found myself just going with it, so it's not a big issue either.

I thought it was all smooth sailing and then wave 5 hit :) Very nice ramp up in challenge, and lovely ambience and color scheme too! Only thing I was confused by was the upgrading, did it do anything if I clicked a turret again? It took the credits but I'm not sure I noticed it firing more or anything?

Heh, kinda Flappy Hex. Certainly has that "just one more go" quality, got stuck for a bit trying to get further and further :)

I originally uploaded a web version, but seems the lighting and post processing is not supported there and I obviously couldn't let that mess with the sixiness :D

lol :D but also, the projectiles colliding and canceling each other out is oddly satisfying...

It looks really good and the idea made me chuckle, but I'm not sure I totally get it. It felt like it didn't really matter which spot I picked because there was treasure everywhere anyway, so I'm not sure if I misunderstood something.

It looks really good and the idea made me chuckle, but I'm not sure I totally get it. It felt like it didn't really matter which spot I picked because there was treasure everywhere anyway, so I'm not sure if I misunderstood something.

That is very pretty, and I do like me some combat typing. I was a bit confused by the beginning, but that's of course because it's unfinished, so just going by what's there, this seems like a neat idea that I could easily see being developed into an amusing little game.

Nice! I actually really like all these variations (I'm not sure how I'm supposed to beat half of those, but it did make me check out a lot of them :D)

And I too managed to beat one shot man, first try even. I just kept strafing, he kept missing and I did not ;)

I've uploaded and published my game, but when I hit Submit Game on the jam site, it's not listed. Any ideas? Panicking a bit

EDIT: Nevermind, apparently creating a project from the submission page submits it automatically. I need to go to bed.

Ah, thank you for letting me know! That is indeed a leftover from renaming Katy to Katie, which apparently I didn't do properly with a Replace All. I uploaded a fixed and slightly expanded version. If you have saves from before that point, you should be able to continue with your playthrough. Thanks again!

Oh wow, thank you so much! That was really fast too :D

Yeah, sound I didn't get around to anymore. I only finished writing the last two endings with 5 minutes left to upload, so this'll have to be a post-jam addition.

But for now, I gotta catch up on some sleep and have look what everybody else did tomorrow :)

Edit: Ok, I think I found the bugs you were talking about, if that was a certain character popping up where they weren't supposed to ;) Though it looks kinda cool. Might be something to look into, if I can't remember this event across restarts and have this happen on purpose...

I'm sorry to hear you're going through this, but glad you had it and that you parted in love, not anger. If you ever need to talk (and the people you've known for more than 5min aren't around at the time ;) ), you know where to find me.

That's an interesting interpretation... And I personally think that every interpretation is valid, so if that's how you saw it, then that's what it is. But of course, if you'd rather have an actual answer as to what my intention was, I can tell you :D (There's no spoiler tags here, so I'll just hide it behind a link: SPOILER) 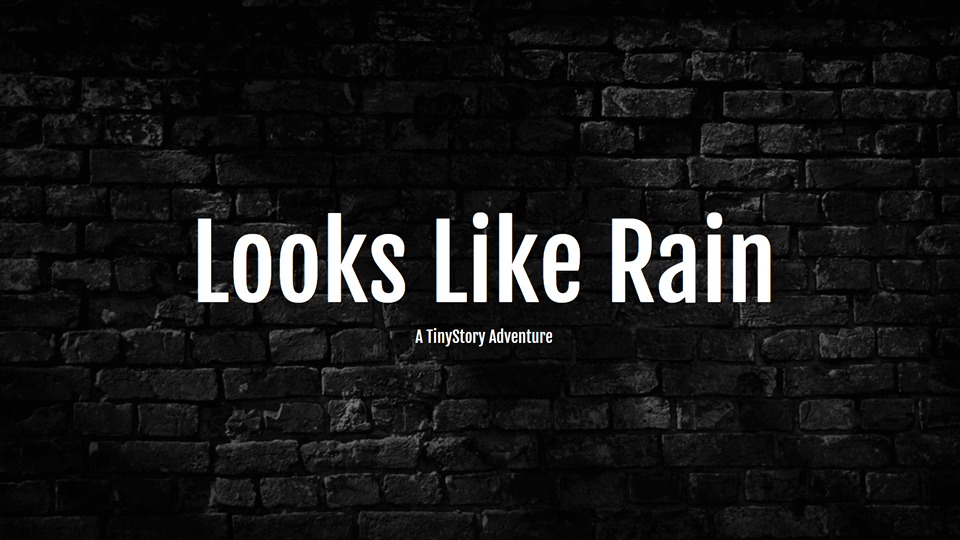 Looks Like Rain is a short interactive fiction game I made for a friend's Game A Week jam here on itch.io, and I'm quite happy with the result. So if you have 10 minutes to spare, check out this odd little tale about a rather persistent little bug:

The game was created with TinyStory, a small indentation-based CYOA engine I wrote for fun in my spare time. You can check it out on GitHub if that's the sort of thing that interests you.