I found you through Twitter & seeing a really small Dev making this game really sparked my interest. Now I don't know if this is on my end but I can't find the download & I can't download the Rar file on the Demo release post.

If I'm not supposed to play it yet that's fine! I'm sure it will be worth the wait!

This looks really promising. Been looking for good Real-Time-Strategy's to scratch off my itch for another RTS.

Do you have a Discord or something where I can find Players to play with? As someone with little & almost no friends it's really difficult to find people to play with.

Noice. Keep up the good work, & take your time no need to stress yourself!

Not yet. I only just finished downloading the update, I'll let you know how it goes.

Thank you so much for doing this!

Really nice game! It gave me shivers while playing, if you don't mind I'd like too release some gameplay videos on my YT channel.

If you could have used MV3D to make the game a Retro 3D Horror it would be closer to Phasmophobia.

There's also QAudio that will allow you to have more of a "Surround Sound" system. This would make the game's sound a whole lot better :).

Now there's also a Plugin in progress that will allow Multiplayer in RPG Maker games if your interested.

Thank you so much for making this!

Hopefully no damage has been done to you or the game because of this act..

Thank you so much

Thank you very much for accepting my request.

Now with the lighting plugin it must just be my Integrated Graphics card that sometimes won't be able to handle some lighting plugins and effects properly. This won't be a problem while recording since for YouTube videos I borrow my brothers PC which can handle what my PC can't.

Great work on the game.

The Story is very interesting and had me going, the music & sounds are good, and the limited Voice-Acting was handled very well. Choices was very satisfying & having secret consequences for certain actions really made the world feel more alive.

Because the character I created and was playing as is a un-sociable, lonewolf who values wisdom & honor. I liked to do my missions solo unless the quest is to great for my character to handle alone. And because of this I noticed that many cutscenes and NPC dialogue was buggy as the game expected for me to have party members.

For example: When my character has a bubble sometimes the other events who would normally be my other party members would also have bubbles even though no-one is there. And this is small & isn't very important but a lot of NPC's talk as if I have party members when in reality I'm alone.

One other big bug I encountered (It might just be my potato PC...) was that the screen would have this large yellow ball covering the entire screen it would never go away after it comes and it doesn't allow me to see anything, I opened the game with RPG Maker MV to investigate and I fixed the bug by disabling all of your Lighting Plugins. This isn't very important if the game works well on other PC's and this only happens to me.

I cant wait for full release & I'll want to buy the full version when it comes out. And I would like to have the permission to play the game on my YouTube Channel if you would like.

Played the game 1 week after original release, It wasn't the best game Iv'e played but it wasn't the worst. Played it again 2 years later because of the new huge update & I have to put it in my favorites list the update really improved both Gameplay & Story. The bad ending was very unsatisfying in the original but now the "Perfect Ending (Bad Ending)" is really awesome to see. I highly recommend everyone that enjoys this game to try out Midnight Train the game Lydia made after Aria's Story.

Thank you. I'll do it once I get the time.

This plugin is really useful and really awesome!

Since you didn't specify is it possible for me to use this in a commercial game with just crediting you?

This game looks promising and I would like to play it on my channel if you would like me to.

What I understand yes, as long it has something related to 2020.

Thank you for giving your opinion.

It's my first time to, but I did see a small Submit button next to the Leave Jam button. I would think that's what you use.

It's at the top of the page next to the timer.

The possibilities are endless.

I'll really appreciate it, if you make a offline installer of the game so i'll be able to play it offline. 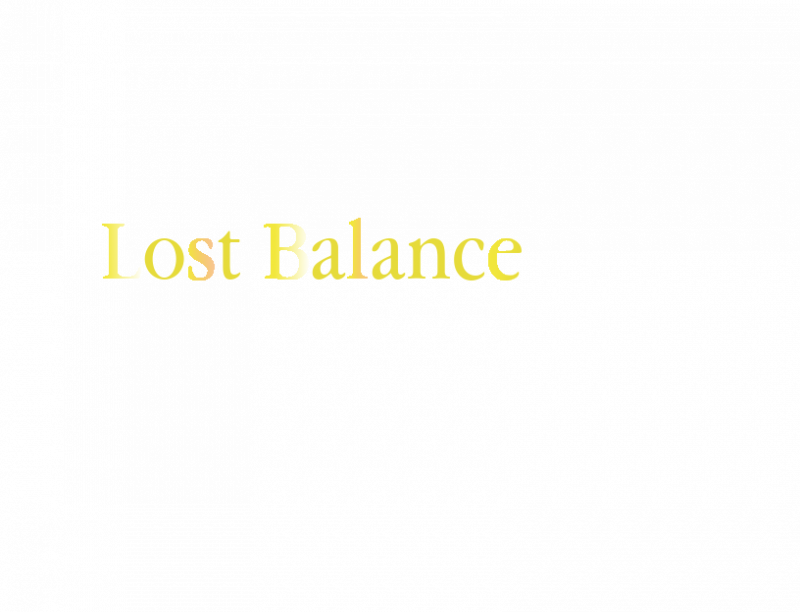 After many years of peace, Temerkia attacks the Kingdom and kidnaps their king.

So Eliza the last Warrior of Balance, Ryoma a Royal Knight, and Prince Richard embark on a quest to rescue the king and stop a war from starting.

Will they succeed in the quest or will a war break out and consume the world?

Eliza: The last Warrior of Balance, her job is to keep the peace and prevent war, but how will she do that?

Ryoma: A Royal Knight of the Kingdom, his job is to protect the royal family from all harm.

Prince Richard: All he wants is to prevent war and to save his father, but he must be carefull doing so, or he will spark a war among the nations.

Terence: A traveler who went around the world many times, he believes what Temerkia did was wrong, so he aids Richard on the quest and lends them his airship.

Princess Saria: Princess of Temerkia, she wishes to prevent the war and believes her father hasn't done anything wrong, but after many events, she decides to help Richard get his father back.

Gabriel: A Kingdom General, he leads a group of loyal Kingdom soldiers, when he learns of the enemy he aids Richard in the quest to save the world.

There are many other characters, but to prevent spoilers they are not listed here. 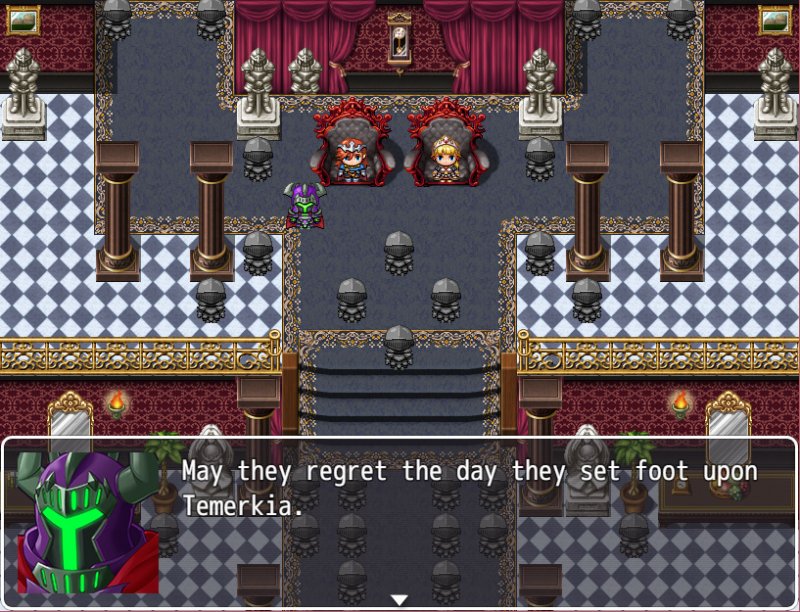 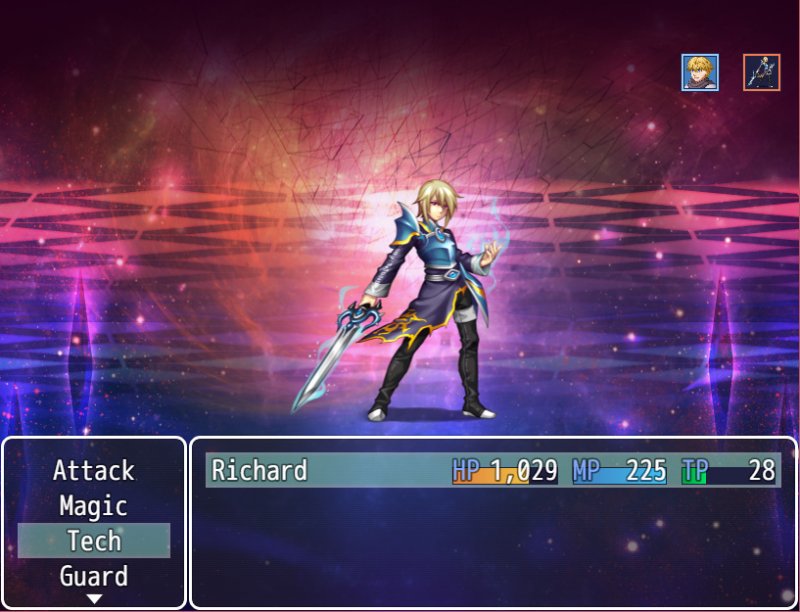 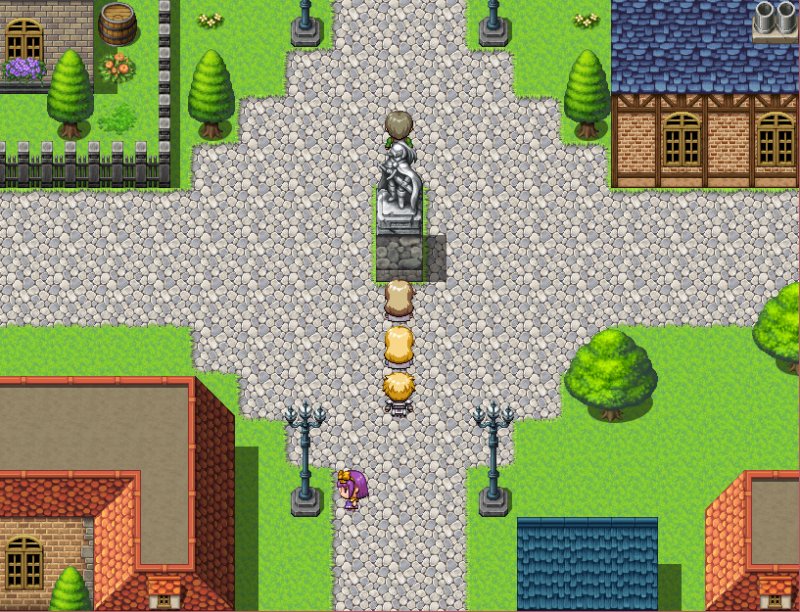 Somewhere in the world there's a secret dungeon requiring also to halves of a hidden key, will you be able to complete the key, unlock the dungeon and claim the prize?

It's possible to attack enemies before they see you, giving you an advantage in the fight.

By playing enough of the story, you learn each of the characters backstory.

Violence, and some story bits best suitable for teens.

Thank you for reading this post and I hope you decide to try my game!

I have completed the demo and have enjoyed it.

I can't wait for the full version.

Go to a candle and a GUI will appear.

Then press whatever key it tells you to.