itch.io Community » Game Development » General Development · Replied to Qory in how to build a game
roadki77216 days ago

Honestly I don’t know any kids over the age of 7 that still talk like this.

Reply
itch.io Community » Game Development » General Development · Replied to xilows in how to build a game
roadki77217 days ago

That’s really sweet of you, thank you. Good luck on your game!

You are truly a master of words. This is brilliant.

Reply
itch.io Community » Game Development » General Development · Replied to xilows in how to build a game
roadki77218 days ago

It’s also not that hard to be dickish to everyone who was trying to help you previously, but somehow your morals are shorter than the lowest bar possible. My comment was not hateful, I was trying to give you benefit of doubt, but you proved yourself to be nothing more than a grade A asshole. Also “the game” doesn’t make any sense, nor does most of your language usage, which is why I originally asked if English was your first language or not, because that could help clear up some of the confusion and difficulties you’ve had with other people. Also, considering this post is still open for comments, I am allowed to make a comment. I was only trying to give you the chance to show that you just didn’t understand the language enough to communicate with other people, thus leading to confusion, but no: just like all your other comments, you just have to be the asshole. Also, it’s “not that hard” to understand I was only trying to clear things up for everyone else you’d previously snapped at, hoping to make you seem like a better person, but clearly that is not possible. Have a good day, and please don’t get mad at people when you don’t understand what they are saying, just ask for clarification next time.

Reply
itch.io Community » Game Development » General Development · Replied to xilows in how to build a game
roadki77220 days ago

Actually I’ve read through the posts comments and know that you are pretty much assholish to everyone. I was trying to give you benefit of the doubt, but here you go proving yourself to be a dick. Thanks for exposing yourself, I guess.

Reply
itch.io Community » Game Development » General Development · Replied to xilows in how to build a game
roadki77230 days ago

Like, did you have to learn English as a second or third language? Or is it your first? Because most of your comments make it seem like English is not your first language, which would make more sense as to why people had trouble understanding you and vice versa.

Don’t think about what you think would be popular, or even a well-thought-out concept, just create something you enjoy first, and AFTERWARDS begin to tweak it for the public. It’s so much easier to come up with ideas after all the pressure is off.

Reply
itch.io Community » Game Development » General Development · Replied to xilows in how to build a game
roadki77233 days ago

Is English not your first language?

Hey sorry but I noticed that there isn’t an option to have a different font. I’m legally blind and this font is hard to read and blurs together, even with glasses on.

that was so well written, damn

I kinda wish I could’ve given the creature a hug :( he seems like he needs one

It was a problem on my end; took a bit, but eventually I had to restart my computer and it fixed itself lol.

can’t type anything for some reason, lol

which version is on the web embed?

Oh wait nevermind I see it in the tags now :-I I never look at the tags, sorry. My bad!

The game description should have note that it’s NSFW. I know it has a warning at the beginning, but I really do think it should also be in the description. I clicked on the game after reading the description thinking it was just going to be a cute little game about babysitting, and then the warning pops up and I think “oh, well, it’s not gonna be the WHOLE game, certainly it’s just one scene” but no :/

HOW DO YOU DO IT

Is there any way to beat this?

“SHOT THROUGH THE HEART BY BON JOVI” fnrvjmeueh beautiful

Horror RPG gay parody of iCarly??? what the fuck is this??? i love it

As someone who has played the demo and LOVED it, I’m curious as to what is included in the Full Version so I can decide whether to purchase it or not. I’m sure it’s probably detailed somewhere, but I can’t seem to find it. If anyone could tell me/link me, that would be great!

Reply
Sort the Court! community · Posted in The dragon is such an asshole right?
roadki771 year ago

ALSO! About the cats! I only have one cat, which is the only cat that I ever named in the story: Tabby. A pretty basic name, I know. Emma however, does have two cats, and the anecdote about the cat clawing me in the eye is real. Fun Fact! Eyes bleed a lot.

Confused. It says “Remember this” and then the screen shows me three colored bowls. I assume I need to get the bowl it showed, but it doesn’t do anything, and I’m just stuck on this page with three bowls.

How about a biblically accurate angel? Those are always fun to draw.

— The game Quiet, Quiet was made by Odysseus using Twine.

— This is a beta version of the game; the full game should be completed by October 2021

— It is based off the YouTube video “Shia LaBeouf” by Rob Cantor.

— Quiet, Quiet is named after a line in the song referenced above

— This game is not intended to infringe on any of Mr. Cantor or his associates’ rights. If you believe it does, please contact me and I will remove the game. This game is not for a profit. All plot credit goes to Rob Cantor, etc.

But your leg-ah! It’s caught in a bear trap! 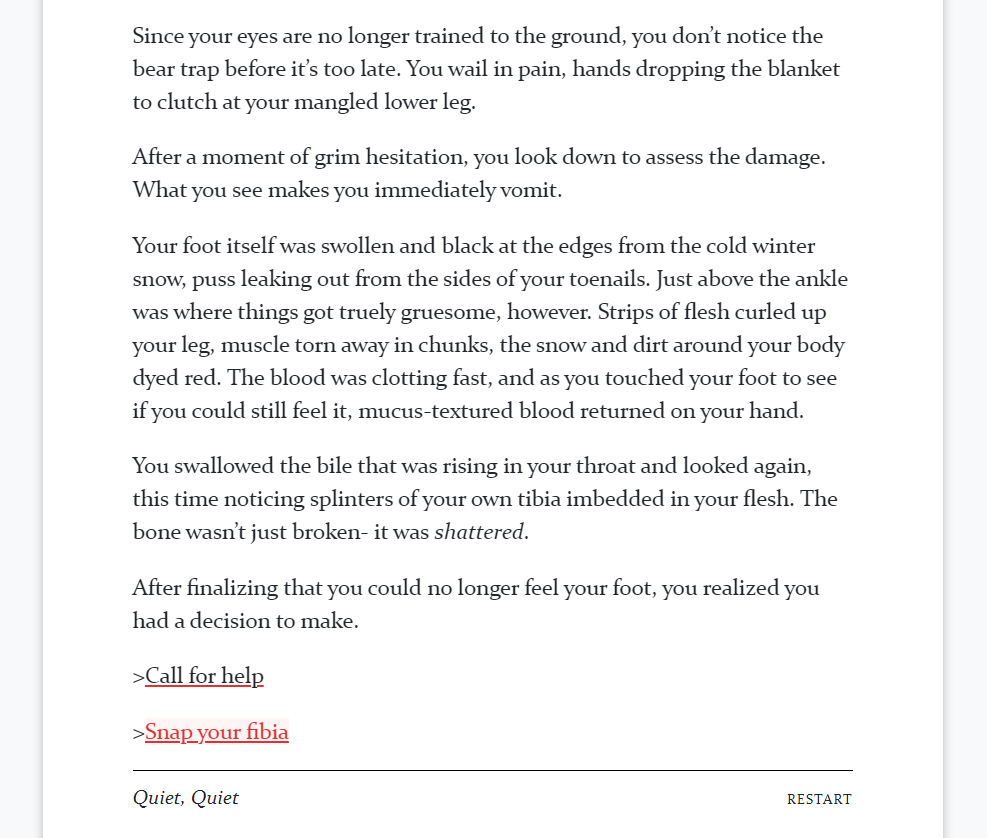 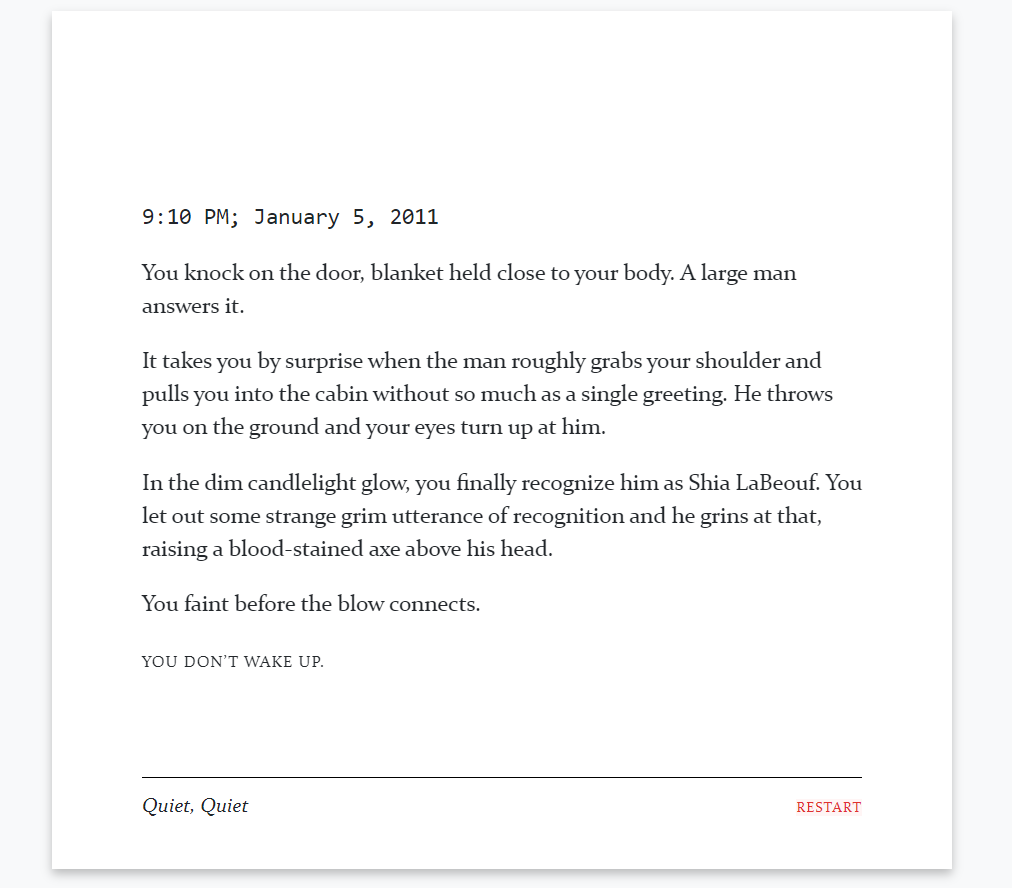 I was going to add a hunger bar, but for the sake of finishing it in time, I removed the mechanic. If you would like me to add it back, let me know. This line references the unused hunger bar: 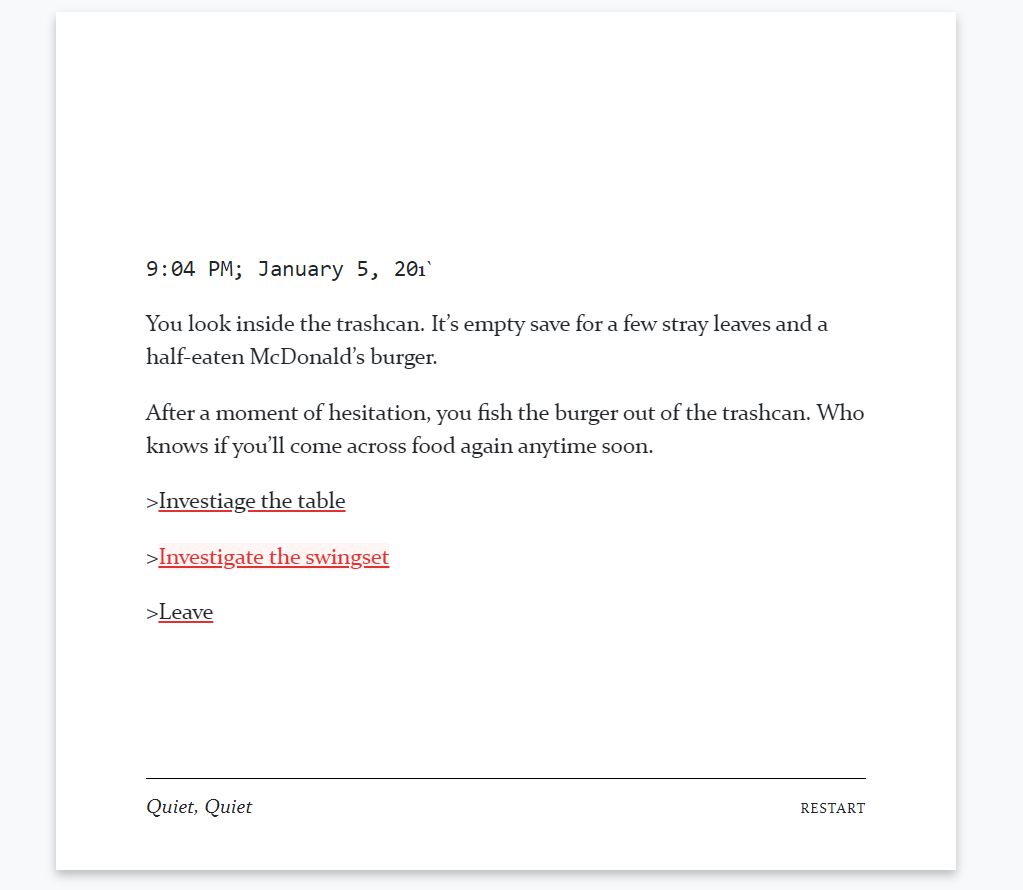 The game starts here; if you don’t start on this screen, something is wrong. 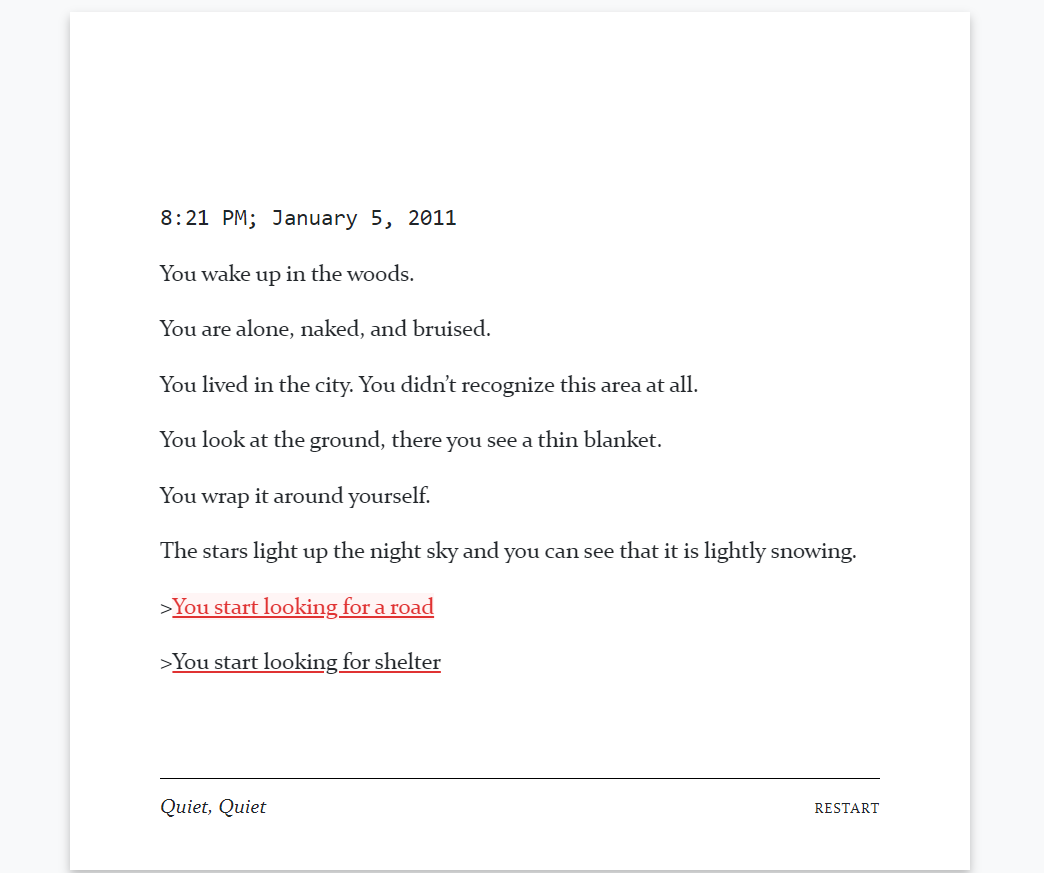