Been advertising this to my friends as "literal Cooking Mama for the holiday and also you're gay." It felt so good to view/play super-relatable media like this. How do you knock it out of the park every time?

Can save files in the demo transfer over to the full game?

Congratulations! Waited until all three parts were finished to dive in.

Thank you for a happy Halloween

Ayy, will redownload and play! Just one question: do saves from prior versions transfer over, or best to unlock everything fresh via v3.0's intro?

Looks like it's fixed! Thank you for being so responsive and for another lovely heartwarming game.

I'm experiencing an issue usings saves from ver 1.0 versus in 1.12 for the QoL update (Windows version). When it returns to the berry harvesting screen I get a missing font error. I'm at the last repair so I was hoping to save my wrist...ahaha...

I made a pastebin of the traceback in case that helps: https://pastebin.com/4yLPwtAD

April showers bring! ...July flowers? Cleared all the endings and it was just so warm and heartening. Got End 2, then 1, then 3, but End 1 bowled me over the most. I was worried the old trauma would come back and I'd have to roar DON'T YOU DARE. Instead, giving the bouquet to the Master--UOOOOAWWWW. Yet I appreciate the existence of Ending 3 the most because Bud's reaction was so normal and realistic. Genuine platonic friendship ending?! You don't say! I like Clover a lot--I like all his expressions, especially when he rolls his eyes up during moments of baffled internal monologue.

My only suggestions for improvement are fixing a few typos ("while Bud always order a new item", "I don't know if it's alright ask at this moment...", "projecting hopes into you"). This was a genuinely lovely game to be warmed up by. Congrats for finishing!

Still going 2020 NaNoRenOs and was pleasantly surprised I still had good ones to read. Liked the economic writing that keeps the story and action moving, fitting artstyle, and a fitting soundtrack with good variety. I appreciated both endings and how the bad end plays with the title. My only suggestions/personal preferences are cosmetic: different font, color-coded nametags, All in all, great work and I look forward to future endeavors!

I have no idea what a PSX sound novel is but I liked this even as it was so short. Reminded me of other short, abstract VNs that focused on atmosphere, which I missed a lot. Good job!

Of all the otome-type entries in NaNoRenO (I think I got through all of them) this felt the most otome-like, actually! It followed the standard setup and kept a good, constant tempo. I'm only sad the puns didn't penetrate as deeply as the setup suggested, but I love Neim's energy and how she literally does not have a sad face. Love a punster of action.

I'm a nerd so I enjoyed Rico's route (as well as Neim's struggles in the club because haven't we all experienced something like that), but I also like memes so the fun times of Matt's route were side-splittingly MAGNIFICENT, especially the last choice. I also appreciate well-done bad endings so Seth's bad ending turning into high-octane fuel was emotionally heavy but oddly cathartic. Lastly, "yes" to Question 2! If it's just that one route and the same timeline, I'd like if it were within the same game.

Really interesting to read through. I like technical and philosophical dialogue, so I enjoyed Kato and Channery the most, although the latter spooked me quite a bit! TIL. I wish Robyn talked more about her work because handling botanical mods sounds so cool!

Lovely atmosphere while not shying away from the normal crumminess of days and people. Real gem, especially the wisdom recalled while under the waves.

Playing as a genuinely devious but charming lady like Robin is such a rare treat. Read all of Part 1 and eagerly on the lookout for Part 2.

Another homerun! Was a little sad there were only 2 endings since I remember Jack-in-a-Castle required more finesse with the multiple endings. But real solid work on the style (and spot-on variations!) of visuals, mad teller, and crazy setting!

Having to relax MeiRei's scope makes sense given the time constraint. I did enjoy both routes!

Solid execution throughout every aspect, from the visuals and writing down to the tight focus of the subject. My only nitpick is on the programming end, where I'd expect the chat log to automatically flow through typing/read indicators to the next text message, instead of having to click through all of them. Occasionally a message from Mr A was cut off at the bottom before it was pushed up by Dolly's message. Regardless, congrats on completing such a fantastic NaNoReNo!

Got all the Achievements! I dove in without reading the summary so I was really unprepared for the drama-heavy turn, and this turned out to be a really chunky NaNoReNo at 3.5 hours. Probably would have been under 3 if I weren't so often in this screenshot: 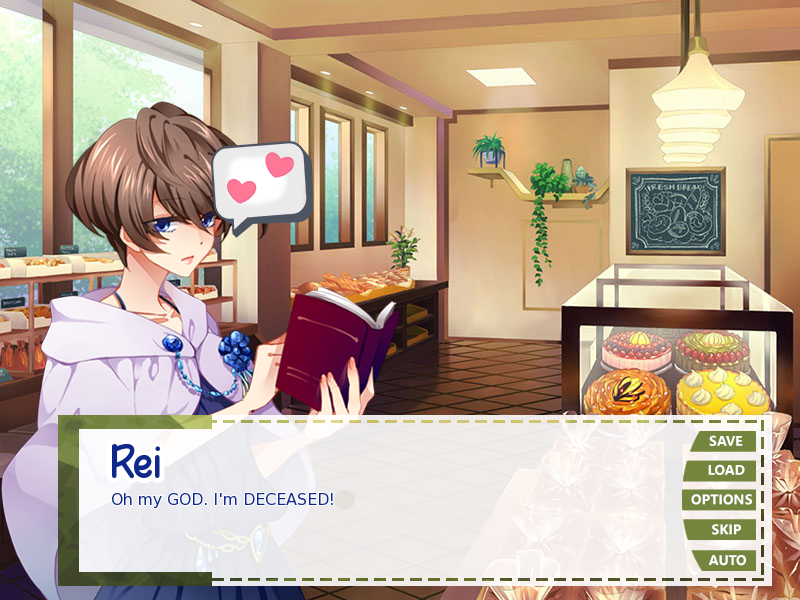 (Rightly representative of Souma's route. HNNnnnNNGggGG. He didn't even start out as a favorite!)

I had to mentally reorient myself often when tone shifts happened (I gunned so hard for the puppy dog and then...; and then couldn't avoid Mr. Not-Leather-Weather), but I swooned in both routes. I love the supporting cast! Textor Grams is the truest bomb and I'd love if Mei and Rei got more of their own focus if the scope allowed them to. Truth-Dare-[redacted] is not entirely relevant to the story but I'd be damned if it wasn't a jolly good time with the characters. I always enjoyed your games and this one did not disappoint, either. Good job on delivering another NaNoReNo! Looking forward to all your future endeavors.

I didn't keep detailed notes for it. afaik make the meals that him in the kokoro (it seems he really liked sweet stuff?) and similarly lean sweet or be open to the relationship in your choices.

EDIT: D'oh you already got an answer. I haven't gone back so I'm still missing Nacho Day and Butter Off. Do you have tips for those?

I almost didn't see this because it wasn't technically NaNoReNo, but recognized you from Sister-Zoned and was like, "Yeah, I'm down for more of the same!" I love the character's zany antics on top of the romantic school setting. I laughed at every absurd moment ("Not the time or place, heart!") and d'awwed at every fuzzy feelings scene. Slow-burn romances 5ever. Loved this.

One weird bug/behavior I found: I got Achievements 1-5 but the 6th doesn't even display on the screen. Intended or error?

I took forever to check out my NaNoReNo haul. Still have others to go through but this is definitely one of my favorites so far. Some typos throughout but can't beat fantastic art style with lots of variations and dynamism, great soundtrack choice, and lots of replayability. I struggled to get the Jack endings the most but finally prevailed. Adding that I would buy an extended version of this; I thought Sylvester would be a route until I came back and checked out the specs, haha. Regardless, congratulations on a great NaNoReNo!

I've slacked off on going through my NaNoReNo lot since April but I was stoked to get to the Stardust Soda offering. The naming sense of everything is glorious (I cracked up at the Emperor's dishes) and the core concept of desperate uni cooking is so relatable that I'm sure some of my friends well past uni are still doing this.

I think I've been at this for 2.5 hours and finally got Perfect Pear. Just need Nacho Day and Butter Off. I love everything including the subtle nuances of certain conversation choices and it's been a joy to replay. Thanks again for an awesome game and I look forward to everything you are/will be making.

At last, got ED3! Sorry about troubling you for extra hints but also thank you very much. Above all, reiterating my thanks for this entire game and its immense polish.

Also until I checked your group page I did not realize you were the same team behind Reflections on the River. Dynastic Chinese stories, bless. Definitely checking out Last Call and Pangs on your page. Keep up the good work and good luck with school!

Tried following this many times and I keep getting ED2. Outside of the choices you specified, is it a matter of being completely cold or being slightly friendly?

Pleasantly shocked by the amount of polish and heart put into this. I have come to ask for help on ED 3 as I've gotten 1, 2, and 4 via the hints described. I've been trying to adjust for ED3 to no success.