Glad you like the game! Please email me directly at Business@CatapultGamesVR.com with the email you used to make the purchase and I will make sure you get access to a download

Bad news: There is a bug exclusive to the first time you play the game where zone warp orbs don't appear after watching the opening story images, blocking your progress.

Good news: Just close and re-open the game and the orbs will be there! You will be able to enjoy Don't Look Down in all its glory.

Thanks for telling us about this and I'm glad you had fun! Do you mind telling me what the specs are on your PC?

Hi andybak, thanks for bringing this to our attention! I think I fixed it, let me know if that problem still occurs.

As VR gamers are still a niche group of early adopters, this community would benefit from having central places to share games and feedback. It would be great if VR could be a category in the Community tab under game development. Also, the home page and browse tab could use a VR section.

Basically I would appreciate anything you could do to make it more intuitive for VR gamers to find VR games and connect with each other.

I'm part of a small studio that's been working on Don't Look Down for more than a year. We are approaching a paid early access release and I would appreciate if anyone has feedback on our menus, UI or anything else they notice.

The reason we made the death grid is to show the player how far they can fall before they will die. We could increase the maximum fall distance if it seems too harsh, but I think the grid serves a useful visual purpose. Also, there isn't always ground beneath you (eg. when you're climbing over a chasm). What is your other feedback?

We currently have 4 devs working on the game. Chris is the lead coder and designer, Kolel is the art director, Jake is a level designer, and I am doing some game design, but mainly business development.

Always happy to get feedback. A couple things to note. First, you can grab DoomBots even when their spikes are out. Second, Spikey Spire is currently lvl 4/5 in our alpha to show the higher end of our current difficulty curve. It will likely be repurposed as one of the final levels in our early access release, meaning that there will be 6-9 easier levels you can play before having to deal with that level of challenge.

I hear you that it might have felt like you were holding the rope when you fell multiple times in the final gauntlet. Those 3 ropes are fairly narrow, so it is pretty common to barely miss the grab, especially when you are carefully dodging spikes. It might be worth making the climbing easier at that section so players can focus more on dodging the spikes and less on precisely grabbing the holds. We appreciate you trying out the game and hope you give it another shot with our next update!

We've added a new level, it's the hardest one yet!
DEVLOG

Hey, this is Dane from Catapult Games!

We're a small studio from upstate NY that's been working on a VR game for the past year. You can see our most recent trailer below.

Don't Look Down is a VR climbing game like no other. No other VR game has you grabbing and smashing robots into each other, dodging flying spikes, or dashing through bonus rooms for gold coins.

We like our climbing system because it's physically immersive (unlike walking in VR with an analog stick) and varied enough to let you play as simple or complex as you want. You can climb slowly and safely, or you can master the art of flinging to speed through the levels. You can smash robots as soon as you grab them, or you can throw them at distant enemies to take them both out. You can even grab a robot, hold onto it, fling one-handed towards another enemy, and then smash them into each other!

Here is our most recent update:

- Replay Level and Next Level buttons added to the end level of menus!
- Added an animation when you gain more burn balls. Watch the ammo fly into your hands!
- New orb added to the Overworld so you can easily access an image of the game's controls
- Torches actually look like torches now!
- Platforms now fit the natural aesthetic
- Enemy path marking points are more see-through to reduce perceived grabability
- End of level flag pole now has a pattern overlayed so it's not so plain
- Re-ordered the level warp orbs in the Overworld so the sequence is more intuitive

Platforms
Don't Look Down is currently playable on Oculus Rift and HTC Vive.

Please share your thoughts on our game  in the comments below! 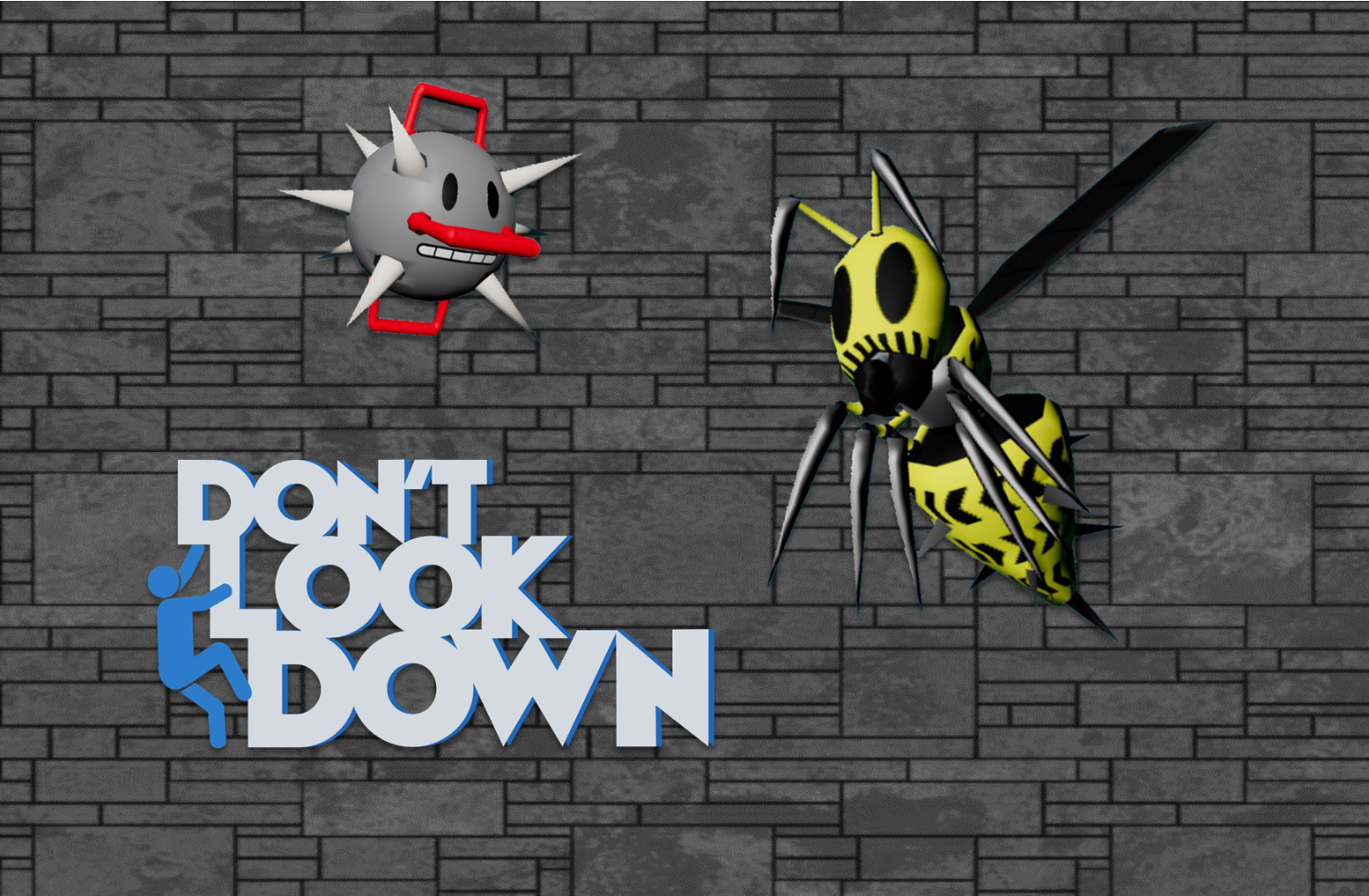 Betrayed by the robot you created, you must climb, fling, and jetpack your way past all the enemies and traps laid in your path. Only then can you return to your base at the top of the mountain and stop his evil plan.

Our most recent update added level 3, which introduces the timing challenge of spike shooters. Among other improvements, we added the "whoosh" effect that you can see above, which changes from white to blue when you reach max speed.

We released the alpha build of our game exclusively on Itch and really appreciate that so many of you have been playing it. We will be releasing several more levels for free before transitioning to a paid early access release.

Catapult Games is an indie game studio based in upstate NY. We're a small team of passionate gamers who have been working on Don't Look Down for the past year. At this point, we're looking for as much feedback as you are willing to provide. Please comment on the post with what you enjoy and anything that you think could be improved.

My name is Dane, I'm one of the founders of Catapult Games. We're an indie studio focused on developing VR games with depth and broad appeal. We've been working on Don't Look Down for about a year now and I'm delighted to finally be able to share some free levels with you! Our climbing game is inspired by classics like Super Mario Bros. and Donkey Kong Country. Our goal is to make a game with intuitive controls, deep immersion, minimal motion sickness, and endless replay value. Our playtesters have expressed joy at grabbing and smashing Goombots as well as throwing them at RoboBees, finding and beating the hidden bonus rooms, and many other elements that I will let you discover for yourself!

I look forward to any and all feedback that you might have about our game. We are preparing for a full length release in November of this year for which we will implement all of your great feedback as well as new enemies and features. Thank you for taking the time to check us out and please take a look at our website and social media for more information. Launch yourself into VR!