Multiple players have reported the same problem recently. Maybe some change in browser standards? Unfortunately, updates for the game have been discontinued, but it should work fine at least on Firefox. Sorry for the inconvenience.

Perfect! I've played the game solo and there's a lot I like, the concept, the art style, the upgrade system, the boss... nice game!

I'd really like if there was customizable input, or at least support for AZERTY. I'm looking forward to online support ^_^

That's a nice start. I'm not a platformer specialist, but making the character movements more fluid could be a good direction.

I'm really sorry to hear that. This game is old and I do not update it anymore, but I'm still happy when someone plays it. I've been working on a sequel, which should solve all compatibility problems. But I don't have plans for release yet. For now, if you can use Firefox, the present one should run fine on it. Sorry for the inconvenience.

The start game button is in the green Easy Mode box. If you don't have it, I'd be interested in a screenshot.

If it still doesn't work, try a different browser.

- amazing concept
- great difficulty progression
- optimize graphics: game freezes when there are 4 boxes in 1
- often, execution is more difficult than finding the solution. It shouldn't be a game about execution. Get rid of move counter, give infinite undos.

Is there a way to resize the screen? So part of the level is beyond my screen limits.

The graphics are neat!

Nice game, looking forward to next versions. A little more variety in room patterns and hazards would be nice ;)

Thanks! I'll keep that in mind for the sequel ;)

When you have chosen Easy game mode, there's a button that says "Start Game". Click that button to start the game. In the game there's a help menu that explains how the game works. Have fun!

There should be a title screen, and if you click it should open the main menu. From there, click the arrows to choose your game mode (easy recomended).

It's not just you: uinfortunately, the game does not encourage diversification enough. Worse still, some tech paths are just far from optimal.
I have stopped updating this game years ago, but I've worked on a sequel that greatly improves on the flaws you noted (i.e. there's a progress bar that gives a rough estimate of when the next enemy wave comes). Waiting for when I'll be able to afford an art designer.
Long is the journey until the concept reaches its full potential, and feedback is vital to adjust the heading, so thanks :)

The concept is really nice, but I can't play because the "tap and hold" controls are unresponsive 9 times out of 10. Also there really needs to be some mouse-over popup to explain the symbols without needing to open the help.

Wow can't believe how amazing is the art, especially the music and voices ! Overall smooth and fun experience !

Things I wish there was:

- a way to see pieces that are behind other pieces

- where are other pieces when I move a piece too far

Solid game concept! I'm looking forward to seeing what you build around it :)

One of my favorite games of 2018 so far. Really inventive and inspiring.

Thanks ! Well there's a beta, closed for the moment (maybe I should open it ?). Check your emails in a couple minutes ;)

Hi ! I'm using your art in a commercial game that should be out soon on kongregate. I tried to email you to give more details but your adress doesn't seem to be working (yes I replaced the [at]).

Hi !  Did you see my reply ? Please let me know if you notice anything that could cause this bug. Thanks !

Thanks for the interest ! I appreciate it !

There is the game :

I use relative paths for all my files.

In fact, the images that fail to load are always the same 4. Moreover, they are part of a series of 10 images that are very similar in all aspects, and the others load fine.

The images are sorted in an object called 'allImages'. The keys of the images that fail to load are :

The console also indicates that https://cdn.siftscience.com/s.js failed to load. I'm pretty sure it's an element added by itch.io, but don't think it's a big deal.

I'm making an HTML5 game. The game has a lot of files and loads around 220 images. Until recently, it worked, but now 4 of the images fail to load (their .complete flag is 'true' but .onload() never triggers, and an exception triggers when trying to draw, which indicates that the loading failed).

So I changed the program so it detects the images that fail to load and retries to load them. The images still don't load.

I would love to someday make a sequel that scales from Prehistoric Era to a Future Era ! But as for Spin 2, it will be much more modest. The reason is to keep the size of the project manageable for a single programmer, and to test new ideas. A small game delivered is better than a big game unfinished.

Also, considering the immense number of civilizations that could be featured, Spin 2 will probably only feature new ones, for the sake of variety. So Egypt, possible, but Palawa, unlikely.

I enjoyed making this game, so I'll probably do Spin 2 eventually, but I'm currently working on another game in order to raise funds for Spin 2. If you know other people who might enjoy Spin-vilization, you can help by telling them about it. You can also directly advance the project by donating. And anyway, thanks for your words of support :)

That'd be cool ! Maybe in the sequel, if it manages to be done :)

Focus on 1 way to sustain your population. Don't diversify too much.

If you only know a few combos, focus on discovering more. If you already know a lot of them, focus on getting what will be useful in the current situation.

Don't forget to use the recycle button. It can really be useful sometimes.

The in-game help has other tips, as well as rule details.

Sorry ! I would contradict my design choice if I did that.

No new bug or problem has been brought to my attention since last update. So I just uploaded the game on this itch.io page as it was. No preset update now, but there is additional content to be added if the game reaches specific milestones, like a 3 rating on kong :)

In the current design, combos and innovations are revealed little by little. Once discovered, a combo and the innovation it leads to can be checked at leisure in the Combo Codex (last choice in the main menu). It might change to a more open system in future versions.

Civilization meets slot machines in this unique game with hours of content !

Your goal is to evolve a tribe from a handful of prehistoric hunters into a thriving advanced civilization. You will need to manage food and happiness in order to maintain your population.

The game has multiple levels of difficulty and additional setups, along with an autosave feature, and more. 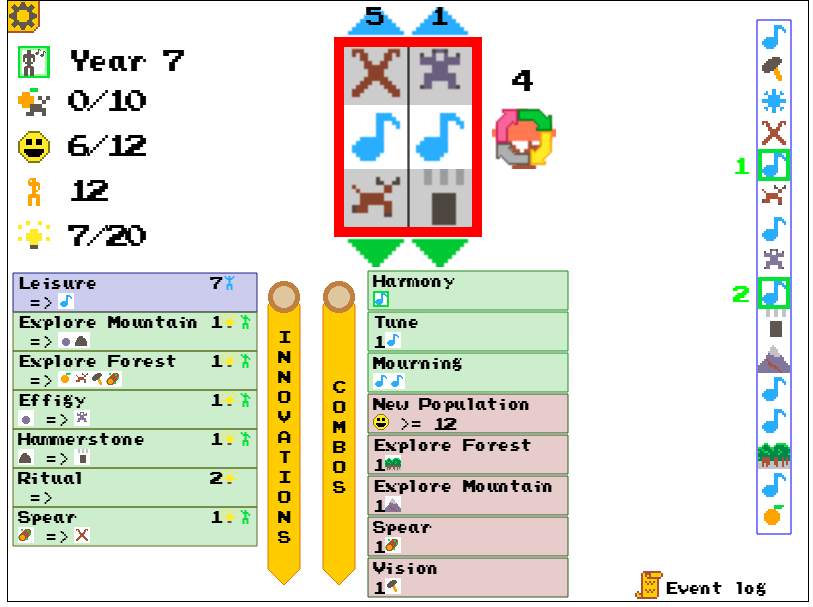