Call Of The Void

We're going to have to make more game! It took us about 3 months to make the game you played (and it took you about 3 hours to beat the entire thing)

Aaaaah. I'd LOVE to play this with two players. Co-OP platformers are my favorite games.

How did you get out of the soft lock with the Ninja boss? Did he eventually just die?

Have you extracted the files out of the zip?

That's so awesome! I'm super glad you got such a kick out of it.

Okay, thanks! Maybe we can fix this (we will try anyway)

Sorry about that! We're trying to fix these bugs. Were you stuck in the floor at the top of a ladder?

Sorry you can't run it :( We're going to try improve the performance a bit, but the physics is always going to cause a heavy CPU load

Thanks got the feedback! Yeah, if  we work on this any further we'd definitely want to add a lot more variety in the level.

That's so rad! Glad you had a good time. Thanks for sharing.

oh no! Thanks for reporting. We'll look into this abs try fix it!

That requires having the passive ability that let's you jump on enemy heads, and then jumping on a lot of enemy heads. ("Boop" probably isn't that clear as a description)

Yeah, I really want to spend a little bit of time and improve the consistency of things. It might make old high scores a bit obsolete though :(

For now we just want to release a better level progression and see if more people get into speed-running it. We're hoping we know what we're doing and this will make the game much better! (at least for people new to it)

It was awesome seeing you get faster and faster!

I really don't know... do you have an old graphics card? (we tried use some advanced new Unity engine features, maybe they aren't compatible with your computer?)

Hmmm... We're pretty new to trying to make Speedrun games... where would you normally post? Do you mean like on Discord... or should we setup a forum on itch.io?

Here's the best time I've ever done (though obviously as the game developer it doesn't count... and also, I'm not the fastest of my friends): 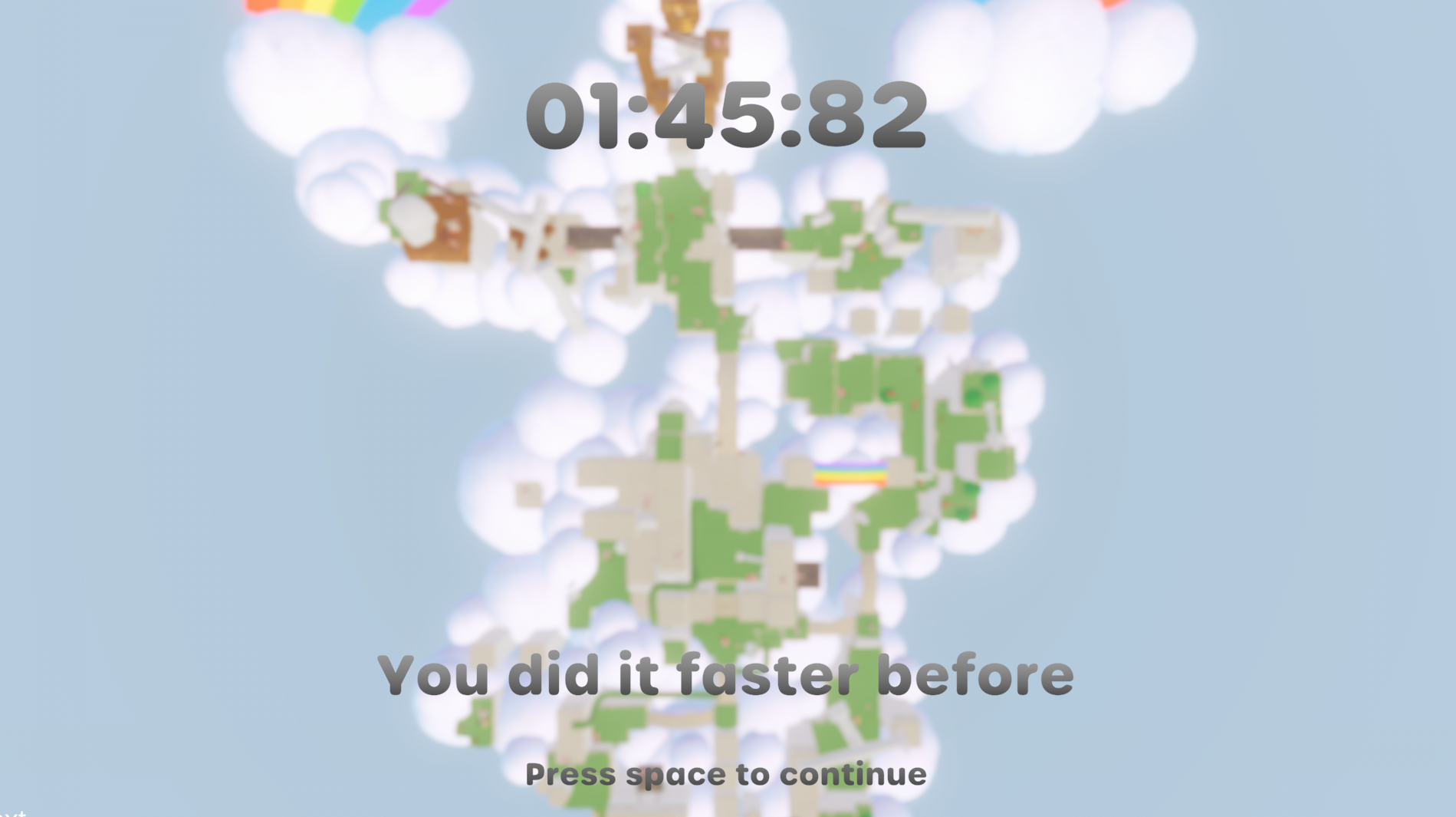 Did you figure out you could right click to through a dagger or jump on enemy heads to gain height?

Yeah, it's sad that we might be making games for people who hate trees (or maybe more accurately, people who hate people who love trees). It's sad we're living in a time where trees are a subject of political fighting.

Thanks for the info. Based on your feedback, I think we could add a bit more content and feel happy with a version we put out on Steam. I was speaking to the other game designer on the project, and he says he's pretty keen to release it as a small cheap game. Like I said, we'd add a bit more content, which should put it in the 2 hour range (hopefully), and we'd probably charge $3-$5 (which would be cheaper in Brazil).

btw. My teammate I mentioned is busy working on another small game which is sort of a reverse city-builder thing https://vfqd.itch.io/terra-nil

Again, thanks for the kind words and feedback.

What I'd like to ask is: How much more content do you think "Everything is Garbage" needs to be released on Steam? At the moment the game probably takes under an hour to play through, which in my mind seems too short. But I'm curious how you see this.

I haven't played Endzone yet, though it looks like a lot of people find the experience frustrating (only 76% of people recommend it on Steam). I have a feeling that the accusations of greenwashing have a lot to do with players disliking the game (and a more enjoyable game wouldn't receive as much negativity)...

But I understand your point about planting trees through game sales feeling like a marketing trick.

Thanks for the compliment! I am really glad you think it's that good.

I wasn't exactly making a pun. Sorry if I was being a bit cryptic.

Like for instance, if there was a way people could pay us by literally cleaning up garbage in their communities, that would feel right. Maybe the easiest way to make commercializing this game feel right would be if some (or most) of the money went to a garbage-cleaning charity.

Also, adding more money and games to the garbage pile doesn't feel right. Though we could make it free I guess.

Cool! ...Yeah, if this is a visual language you intend on pursuing there's lots of unique opportunities from toning down the sophistication of the rendering...

Like how Adventure Time often tackles pretty serious issues, and the playful style allows the story telling to be sincere and disarming.

Or how in Run Man (which I previously mentioned) the cheerful aesthetic allows the game to display a naive exuberrance which is trilling to be a part of.

Or there's also bizarre options, using a childlike aesthetic  to disarm people before upsetting them... sort of like a reverse Axe Cop... or even some Adult Swim style cartoons (like Super Jail). Or the weird dystopian prison-game of Pony Island (definitely worth playing).

Anyway, the point is there's exciting ways to subvert expectations AFTER you first establish child-like expectations.

I found this utterly heartbreaking.

I don't know what else to say. I feel like lying down, somewhere warm and soft, and sleeping until it's okay again, and being glad I get to do so. I'm impressed, but I don't feel like "impressed" sums up it adequately. Thank you for making this.

I love the charming illustrations. They remind me of a very old game called "Run Man" which was very cool back in its time.

The whole MS-Paint / Children's illustration feeling feels like a thing that could be taken further. Like a wild story with child-like sensibilities.

I guess I'm saying I'm a sucker for the charm here :)

Like others have said, there's some visual feedback that makes this game tricky to play.

I spent a while trying to get wood out of trees with the axe. I'm not really sure how I'm meant to get enough wood to build these planter boxes. I built a small one with some wood I got from the broken crates, but I'm not too sure what a seed looks like. I managed to water the box, but that's about as far as I got... it seemed like the area I was in was all walled off.

Definitely a tricky game to try make in a weekend!

I really enjoyed the narrative evolving with the mechanics. I like that you presented platformer game mechanics as metaphor for a (pretty scary) life experience.

I felt in two minds about the narrative. Just that it felt deeply personal, almost uncomfortably vulnerable... but also stripped of any identifiable elements, like it was left intentially vague. I realize this is probably an attempt to generalize the experience, and maybe embellishing it with details would have made it either too vulnerable or too contrived, but I felt I wanted a bit more to hold onto in the story. (for instance it's only at the very end where the stakes of the narrative are made clear, and some of the early texts on the left-hand side of the screen seem to contradict this ending, and while I think I understand what you were trying to achieve there, it still left me with the wrong assumptions about what was going on)

But despite that feeling, what you achieved with the narrative is very impressive!

I really love the way the handholds are both your source of climbing higher as well as upgrades. I also think it's really smart that they come back as black handholds that have a soft punishment for grabbing them (that can be come back from).

I didn't beat the narrow chimney part of the game (my strength was pretty high, but could have been higher) but the level design was very visually appealing at that part.

I don't love the limbo zone before restarting again. I think it is useful in teaching the mechanic, but I would have prefered to just start again (after the second slow motion limbo zone).

I also had some quite entertaining glitching out when the physics got overwhelmed :)

Again, the handhold upgrades was an inspired idea.

Hey, thanks for playing! Here's the Ludum Dare entry https://ldjam.com/events/ludum-dare/47/everything-is-garbage

Oh gosh... We could have made that more obvious! Thanks for the feedback (we'll try fix that)

lol, I didn't think to ever try that!

Well done!! We weren't sure if anyone would be able to make it to the end! (we were so exhausted by the end of the game jam that we couldn't see straight and could much less predict what players would do in the game)

Thanks for the reply!

The burger does look nice... but wait till you see what it is made out of:

Creating some bite marks in a burger would be an example of what I'd like to do.

I may be able to hack this, with applying another painter after the bite marks, but it's going to be messy, and I'd like to animate this burger being eaten (as in, more and more bite marks appear). 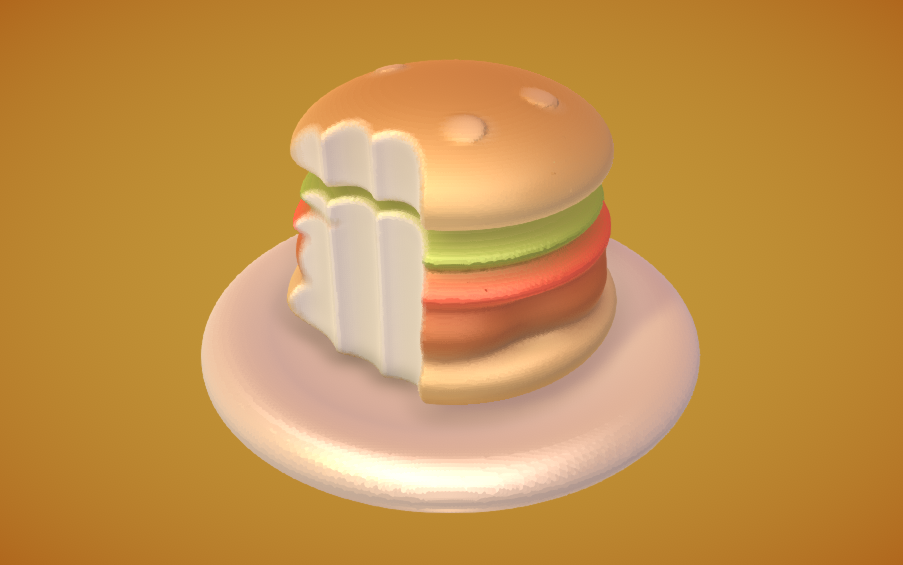