thanks! there's definitely a lot of meat-meets-metal games goin' around, so sticking to a couple really unique mechanics oughta distinguish mine from the rest 😅

it's good seein' you around! definitely been a while!

i didn't get a notification when you posted this! it was like coming back to a really cool easter egg. thank you for your valuable feedback, and it's terrific to see that i communicated the concept so clearly. there's a huge reward in seeing the themes of the game being appreciated as an integral part of the experience rather than a hurdle.

speaking of revisiting, i'll be putting up a new page within the next couple of days for something big.

omg!! i love the entropy pump; i saw Saving Princess made it on there, too. this is so exciting, thank you for the coverage!

Play it in your browser here.

This is a short project made in just 24 hours, and is for the most part a somewhat simple randomly generated maze with a few looping paths. The real feature here, though, is the Minotaur.

The Minotaur knows two things, at all times:

- The layout of the labyrinth.

This is a test of courage and wit, conveniently playable right in the browser!

I intentionally made this as anxiety-inducing as possible, so please be kind to yourself. There are several difficulty levels, ranging from Easy to Minotaur, and each one increases the maze's size and the minotaur's speed.

Give it a go and let me know what you think!

thanks! i'm hyped to see how dual gunstrike turns out; i'm a huge fan of retro schmups so that looks right up my alley. i'm followin' it for sure!

the full release is dropping tonight!

that's fixed! check around tonight for a full release!

hey! the final stage is just about wrapped up and i even got someone on board to do the music - all the tracks are finished and implemented, as well as a few new cars. we're gearing up for a full release October 1st at the latest!

edit: uh maybe i should've said 31st because it's about to drop tonight

i saw his vid, too! it was a great time watching his vid, i'm glad it's bringing people over to check this out<3

R was supposed to be recharge rooms!

but i broke the suit rechargers in the 11th hour and as the clock approached the jam's deadline, i had to axe the recharge rooms - and forgot to get rid of the map icon! the post jam release will certainly have some kind of health replenishment tho, keep your eyes peeled

i managed to get it to work; i didn't want this to sit with only a few ratings by the time voting ended!

getting it to work wasn't necessarily hard, it was just an extra step that i missed at first. that was my fault!

that aside, the gameplay itself was very difficult; though i did really appreciate the chill music and the text hints. if you pitch the music down just a bit in the menu, you end up with really good lo-fi beats. interesting option to have, haven't ever seen that before.

trying to move when your starting speed is insanely fast, but it decreases, means most of my speed would be burnt up trying to decelerate after my initial keypress. thankfully, watching four seasons of the expanse trained me well for flip and burn maneuvers, but it was still very tough to get the hang of, especially with how strange the camera can behave. nonetheless i can happily say i finally gave it a fair chance and enjoyed my time with it!

thank you so much for the feedback!

originally, the player couldn't clear rooms out, and they had to run past enemies in order to get their suit wherever it was. that turned out to be nearly impossible, so when i made sure rooms cleared and the suit would always stay in the last clear room, i didn't have much time to come up with anything else hahaha- i'm just glad i didn't go with my original decision there.

i'm really glad you found the gameplay to be immersive; i worked very hard on trying to make sure the tone was consistent enough to pull that off, and i'm happy to hear it worked.

customizable controls will come in a post-jam release, as well as an android port!

for other games i've made, here's a couple picks i think you'd be interested in, if you liked this one:
SPACE CORTEX:
https://brainos.itch.io/spacecortex
two operatives infiltrate a space station to destroy the superintelligence inside. supports local multiplayer with two controllers, and the multiplayer mode has a secret final boss you wouldn't get to fight in the singleplayer mode. it's my latest, full release title with all of the passion and polish i could fit into it.

SAVING PRINCESS:
https://brainos.itch.io/savingprincess
for a more traditional metroidvania experience with weapon and platforming mechanics similar to this, i recommend trying this one out. it's my first, full release of a game, so there's a few things here and there that i'd certainly do differently now, nonetheless it's had a fair amount of praise and seems to be my most popular title.

there's a couple more WIP games on my itch page, including a hotline-miami-ish dungeon-slaying romp, and what could be thought of as an initial d x ghostbusters fangame.

this was made with game maker studio 1.4! i've been using game maker - and GML - since 2003 or earlier. i did the art and graphics entirely with mspaint.

this came out of nowhere to be one of my favorite games on itch! it has nearly infinite charm and the graphics style is so well done. i'd love to play more like this! excellent polish and perfect execution.

the music is definitely exceptional, i agree! it was made by my friend, whose music channel goes under the name "Designator." you can check their other stuff out here:

we're working on a bigger game together, and i'm very excited for it.

as far as pixel art goes, it's a huge creative outlet and passion of mine, i'm glad you like it! if i ever want to do a collaboration, i'll be in touch.

and you're not weird! i'm glad you commented - and it means a lot to me that i seem approachable to talk to. thank you so much!

i just watched! great video, i'll be sharing it with everyone! thank you so much for the coverage, it's an honor to be featured on one of my favorite gaming channels. <3

alternatively, there's an android port coming very soon!
the touchscreen certainly doesn't beat having a controller with real buttons, though. 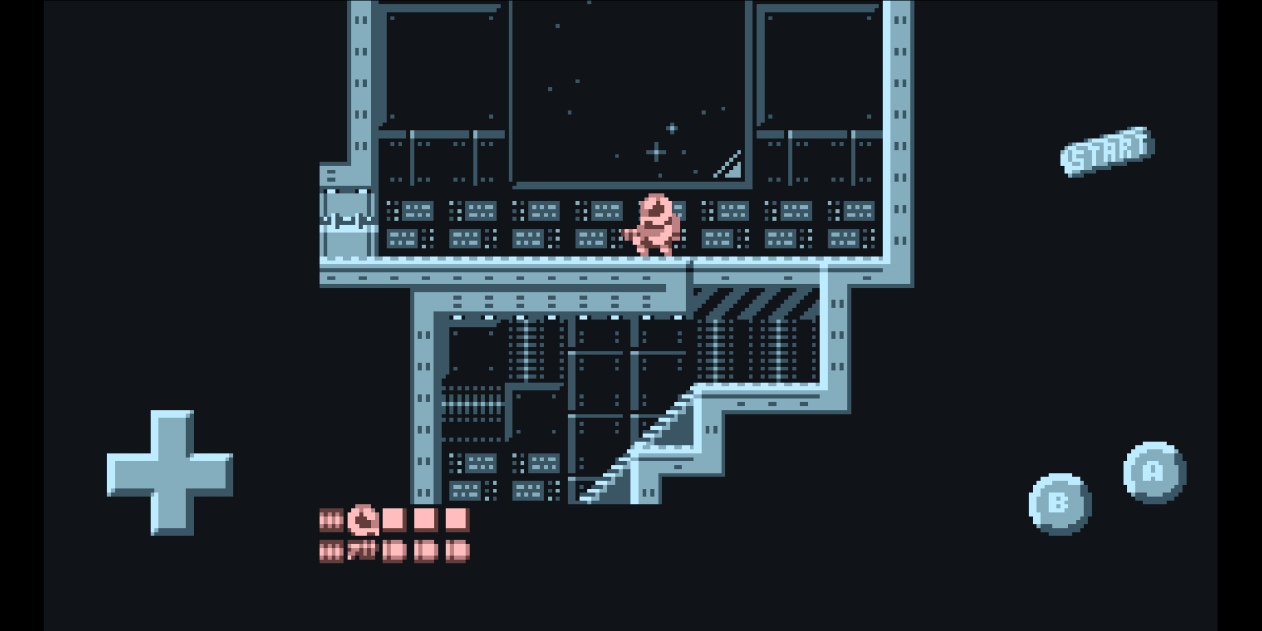 your comments are very constructive, and much appreciated as well!
i'm so happy to hear you're enjoying this entry; i didn't spare a single minute of time working on it until i collapsed at my desk with four hours to go hahaa- phew. that was fun, though!
this game asks a lot from the player to trust in their incremental progress; even when you have to start from square one after running out of biomass, though, you'll start getting a little further each time. believe in yourself, and you'll see the story to completion!

yeah the batteries speed you up!

half-life, metroid and alien, as well!

that would be a dream come true for me! you've gotten much further in the game than most!

dark souls was a big inspiration, especially the way it handles death! thank you.

keep at it and let me know when you beat it!

oh you were supposed to open up the map screen! press q next time you get to that big console. that should open up the rest of the game for you!

oh lord i regret this font choice hahaha
anyway this is an extremely well thought out comment and i really appreciate it, so i'll go ahead and try replying point by point!

- The empty corridors. big agree here, to be quite honest with you. there's a lot i've learned since the release of this game just a few years ago about storytelling and pacing, thankfully.
- the first path unlocking by interacting with an object: that was actually my attempt at storytelling. it definitely could have been more interesting!
- the camera, i also agree, looking back on it. the movement speed isn't high enough, the view size isn't large enough and the framerate is also an abysmal 30 frames per second. the panning left and right was done to give the player some more view space, but because everything is snapping to whole numbers when the screen width is barely 256 pixels or however many, it's - oof. wowie, yeah, i agree, it can look kinda rough.
- the controls: this is actually less of an issue with thinking out the controls themselves and more of a problem with the framerate and balancing the recoil amount. it's a lot more generous and well balanced when the recoil provides a noticeable boost. as far as stopping the jump upon key release, i will certainly stand by that. shooting down by pressing jump was actually a feature in place to prevent people with really old keyboards from missing their input by holding too many keys at once- though it certainly could have been an option, instead of an always-on feature.
- The bullet recharge mechanic is just bad: this, thank god, was completely re-thought for the perpetually in development sequel. the very first upgrade you get doubles your reload speed, instead of the tiny 20% boost each upgrade in this game provides. this game asks the player to really trust in their incremental progress as they find more upgrades, which can be really off-putting at first.
- Each room just kind of blended together: dude tell me about it! the blocks are all kinda ehhhhh looking and a lot of the map, looking back on it, seems to be there for filler. fortunately at least, each sector of the station is themed differently and each sector is a significant difference from the other with their own unique challenges within. graphically i've grown enough to really convey what i want to with level design now, at least.
- spikes: yeah no definitely, they're the worst. they do knockback and stunlock you into a deathpit. i've learned my lesson about spikepits in these types of games - they don't return in the sequel!

i can only keep improving thanks to feedback and criticism like yours, and i really appreciate players like you helping me to grow and learn and become an unstoppable flesh monster.

that's a debug key! you're not supposed to use it! hahaha whoops!

i don't think i'll ever be able to implement online multiplayer sadly; and two player only works with a second, xinput controller! that means that only xbone, x360 or windows controllers will guaranteeably work.

i've been meaning to experiment with remote viewing and stuff like over-the-internet-controller support, but noooo idea when i'll actually be sure if that can work!

thanks for the comments!

also why is my character so angry? can i get them an ice cream sandwich to cheer them up?

i love the character's beard! what a cool guy

the gameplay is very solid, especially once i got the hang of it, i had a great time!

and remember, since your progress saves, you don't have to worry about dying as long as you get a little better every time!

seemed a bit obtuse, but i'm sure with enough patience i can get the hang of it!

i killed the first wave of enemies and got a rocket launcher, it was good shit

the mercenary ship is still docked! hint: you might have to ditch the suit in order to get to it

hell yeah bay BEEEE that's what i like to HEARrr