Should be fixed in 0.25.3, as well as a Windows-only spellchecking issue.

Released v0.25.2 with a large number of tweaks and bugfixes for folding. There are likely still issues, but it should be a significant improvement.

There are a few issues still, obviously 😅

One has to do with the first heading in a file, when the file has no frontmatter, and no content before the heading. I think I have a fix/workaround for this.

The other one, sub-headings getting unfolded, is a little misleading, I think. It may depend on how you unfold it, and the content of the folded area.

If you double click the # heading prefix, or use a shortcut key to unfold the first heading only, or click the fold placeholder, I think you won’t see the recursive unfold you’re seeing now.

There’s some misleading behavior for unfolding as well, that I want to fix. If your cursor is after the fold marker, the unfold key won’t affect that line, but will if you use the command from before the fold marker.

I’m not super happy with that behavior overall, and want to change it in the future.

There’s another bug (that this exposed) where you may see two headings on a single line when using fold all. I think I have a fix for that one as well.

don’t you think that the shortcut to fold the current selection, should unfold the selection too

There’s a separate shortcut for that! … but not in the default bindings.

Fixed a host of regressions related to key shortcuts for folding in 0.25.1.

Yeah, there’s an issue with folded sections unfolding when they’ve been folded via shortcuts. Thanks for the bug report, I’ll try to get it fixed ASAP. :)

Hi, thanks for the feedback!

That’s a good idea, I’ll put it on the to-do list.

If you’re using the default or emacs key bindings, you can also indent and unindent the current line from anywhere within it, with Ctrl/Cmd + ] and [.

Thanks for the bug report! This has been fixed in version 0.24.1

Reply
Deepdwn community » Requests · Replied to jamesgeek in Define variables in YAML to apply them in the text?
billiam36 days ago

Thanks! That’s an interesting usage that I (obviously) hadn’t considered.

I’ll put more thought to it, and other people can see this post and chime in if they have similar needs.

Reply
Deepdwn community » Requests · Posted in Define variables in YAML to apply them in the text?
billiam36 days ago

That’s an interesting request, and not something I’d considered.

Just curious: How would you use the output? It would likely only affect the preview version, so you’d be limited to copy/pasting the content somewhere else, or using PDF/html exports with the variables replaced.

I guess it’s hard for me to imagine how that would be useful to you (or other people), or fit into your workflow. Do you have any example use cases you can share?

Version 0.24 added some of these features, as described even.

Note this may still not meet your needs if your links are not to actual markdown files.

Control + hovering over the URL portion of image links in the editor will show a small preview of the image (if Deepdwn can find it).

Currently any changes made in vim mode are not saved anywhere. I’d like to change that in the future, but I’m not sure when (or if) I’ll be able to get to it.

Emacs mode is much more simplistic though, and doesn’t offer macros.

There’s also a question of long-term support for these features. Both are 3rd party code, and VIM mode especially is

I’m guessing that a Deepdwn-legacy version will have to be created at some point to maintain VIM support, and will unfortunately not be able to receive feature updates.

Hope that helps, sorry I don’t have better news to give :)

I have community copy rewards set up for my app, based on tips (purchases above the minimum price). If somebody adds a $5 tip on a $5 game, I add one community copy to the reward pool.

My app has changed price a couple of times, so figuring out how many copies should be in the pool is kind of a pain, and purchase information and reward updating are not available in the itch api.

To that end, here is a commandline app I’m now using to automatically update a reward for a game, based on sales data:

It can update a reward’s amount and description based on tips as above, or a number of free copies for each purchase, or ensuring a minimum number of copies are always available. Lots more information in the project readme above. 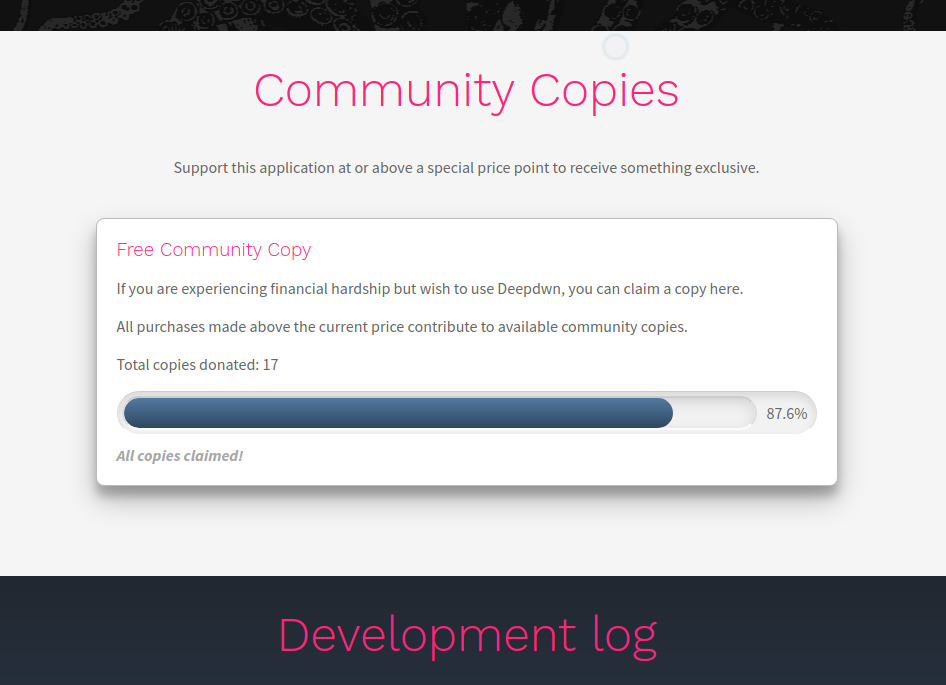 Note: Since sales data and reward updating are not available through the itch API, this app, and the underlying library, uses screen scraping, and requires a username and password. These aren’t saved, but a file with cookie data is. All project code is open source, so feel free to dig around.

I hadn’t planned on adding a separate font size adjustment, instead of whole-app zooming, though that may change.

My feeling on this is: If the font size is too small by default, it’s going to be too small everywhere: in application panels, in dialogs, in tooltips, and so on.

I can increase font sizes, but either UI elements are going to increase in size to accommodate that (essentially what zooming does), or text will overflow those elements, which is awful.

Are you using a custom font with odd size metrics, so that it appears smaller than the default UI font?

Are you using a custom font in the editor, preview, or both? Which font?

Reply
Deepdwn community » Support · Replied to orangered in Can not use the app mac os big sur Version 11.3.1
billiam71 days ago

Deepdwn doesn’t support iOS or iPadOS currently (and isn’t likely to in the future). I’m currently focused on desktop development only.

Reply
Deepdwn community » Support · Posted in Can not use the app mac os big sur Version 11.3.1
billiam71 days ago (1 edit)

The Mac version has not been signed with an apple certificate. Without changing your security settings, you can either:

I can reproduce that as well, and it’s probably affecting everybody. I’ll see about getting a fix out.

Org-mode’s transparent tables and folding are two features I’m really interested in adding, though they’d probably be similar but not identical features.

There are some special challenges for tables in Deepdwn, but I’m hopeful it’s something I’ll be able to add in the future.

These are definitely features I’d like to have (especially the docked preview). They’re not easy additions, unfortunately, so I can’t say when (or if) they’ll happen. Fingers crossed though!

Thanks for the feedback. What information are you looking for via DevTools?

I’d rather build features into the app that solve those kinds of issues.

No worries! It’s something I only learned about working on this project.

Thank for the feedback! You may be surprised to learn this isn’t a bug, but comes from the CommonMark markdown spec for “loose” lists (lists with internal newlines):

Deepdwn isn’t 100% CommonMark compliant (especially in the editor), but much of the markdown preview is.

[edit] Common ways to handle this if you want to separate two lists of the same type without treating it as one ‘loose’ list would be:

Use different markers for the two lists:

That’s pretty reasonable. I’ll see about adding font selection for the preview in a future update. 👍

There are no plans to bring Deepdwn to Steam at this time, but… Sure, why not? 😄 (edit: with the caveat that Steam ultimately decides whether or not to allow you to generate those keys, based on how successful your project is there, so it may not be up to me)

This topic has been replaced with a dedicated support site with full shortcut lists for each of the key binding options:

Local image handling has been added in v0.20.0, including both drag and drop as well as pasting raw image content (see: https://billiam.itch.io/deepdwn/devlog/235597/v020-image-drag-and-drop-pasting-dark-preview )

I think it would be tough to integrate it as-is (for the whole document) because of diagram support.

But adding markdown in a code block in a markdown document, in order to render a mind map feels pretty roundabout.

The syntax isn’t as convenient, but you can also use a mermaid flowchart: 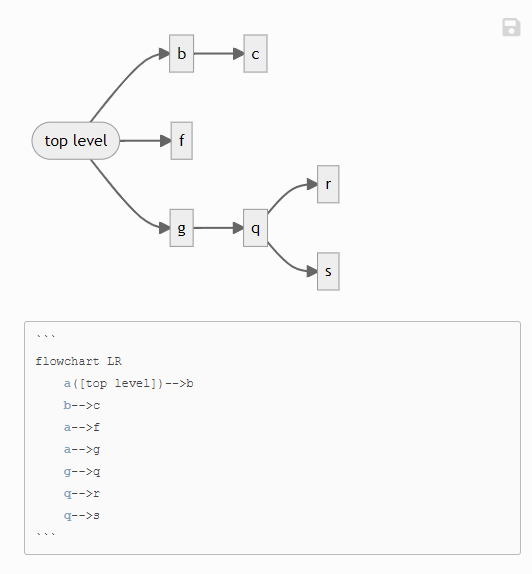 I’ll think about other options

Thanks, it’s really helpful to have an idea about how people use Deepdwn.

That makes sense. Part of fuzzy searching would definitely need to include things like phrase searching and negation. Boolean operators like || and && would be nice to have.

The UI would need to change a bit to accommodate these, I think, I might be able to sneak them at some point :)

I think Deepdwn is certainly suitable for the writing part of writing a book, which is the hardest part :)

At the end of writing, you’ll have a markdown file (or collection of markdown files), and then you’ll need to do something.

You could (technically) export these to PDF from Deepdwn, but it has no tools for typesetting or page layout, so that pdf is probably not going to work for you for publication.

You would probably want to have a process to add cover pages, table of contents, etc and then convert that to HTML and then to PDF, or epub, or whatever.

Deepdwn will have more exporting features in the future, and will probably be able to help with this process (ex: by exporting styled/unstyled HTML), or integrating with Pandoc if you have it installed, but won’t be able to do everything needed for publication from beginning to end.

Here are some things I found related to markdown for book writing:

I’d like to add some kind of split pane setup at some point, but the UI is (obviously) not set up to support it. Maybe some day!