I may be interested in selling this game. It's a tactical shooter. I've taken a break from working on it. I planned to go back to it but if you are interested in purchasing the game I'm open to it. https://anomrac21.itch.io/tbhs

Reply
Improve My Game Jam #16 community · Posted in Could i work on the game that i worked on before?
Joel50 days ago

I didn't  seem to have a goal. Dodge the balls ok... Why am I dodging balls. To better my Personal Best? Ok but I have no metric tell me I'm doing better. Give the player clear goal to work towards. Like a personal best tracker or leaderboard. Engage us, keep us interested.

It's fun, easy to play, and understand but not that engaging.

Nope sorry. There is always the next jam and you have all the time now to get it ready for the next jam in 2 months' time.

FIRSTLY I found the same bug I found last jam.

Secondly, I HATE this game.

Not to say that the game isn't good, but it's punishably difficult to the point that sometimes I feel cheated. There are some levels that just make you really frustrated. I got to the end game but I was so frustrated by the time I got there I just wanted it to end.  I had not more in me to finish the hidden levels I got to the mainframe hidden level and couldn't go on.

Now, This may be what you're looking to accomplish with the game. If so good work. But for more accessibility, you need to make the game a bit easier. @MewsSnep Comment explains some of the issues really good so I won't repeat it.

Have you ever played The Messenger?

I think you're trying to go for that kind of spark of exploration in the end game. But it feels kinda like a chore here.

Congrats on the progress you've made. Keep it up.

This is a very solid game. I like the controls. It does remind me of Philophobia. If you haven't heard of it, Google it and check it out. But this is awesome thus far.

I'm sorry, I must have missed something as I didn't understand what I was supposed to do. I'm thinking it maybe was matching the pattern on the left but I'm not sure. There is no feedback to the player at all. As players, we need to know if we are doing the right thing. I couldn't tell. Also the I couldn't understand what anything did. If I skipped a level I didn't even know I skipped. I spent less than 5 mins playing then I got frustrated and left.

Great Devlog though, Keep working on it.

I couldn't figure out what I had to do. Sound effects are kinda annoying. A tutorial mite be benifical.

I have removed submissions. Here are the games and the reason for the removal.

Marburgh 2 :- No game upload on page

Thanks for the reply... I'm so sorry. Now that you've explained what happened I'm sorry that I removed the entry. That would make sense, That friends of yours would artificially rate your game higher. I am thankful that you let us know what happened so we are aware and we can take measures. Knowing this is a possibility, will inform our decisions going forward. I hope you got something valuable out of the jam. I'll look into if I can reinstate the entry. Thank you for participating.

I received a complaint about a game that seemed to have cheated in the jam. After a review of the evidence by the Host and the members on the discord, It seemed like the entry score was inflated by many new accounts that only rated that game. As a result, the entry was removed from the jam.

If it was your game, and you think it was wrongfully removed contact us on discord so we can discuss further.

If you did cheat note the point of this jam is not to win, but to get feedback from people who actually played your game. let it be up to them if they like it or not.

UPDATE: The entry was removed wrongfully and as a result, I'm linking it here.

Too many blind jumps... I couldn't get past level 2. Didn't know where to go. It's important you let the players know what they have to do to win. I got frustrated and left. I'm sure a lot of players would do the same. I like the concept and aesthetics with the code as a platform that was great. However, not everyone understands code... so that's a thing.

Nice concept. Your sound design needs to be on point for this to work. I think though you need to reward the player somehow. After I found the cat I was like... Is this it? I do like the premise of using sound to provide feedback to the player. This is a very interesting game... Well done

Awesome game. One of the best I played in the jam... thus far. I like this a lot I think the controls need a little less speed but it plays well as is. I didn't get to the mid-point, this game is hard but this is one ill try to beat for sure. I do think it can work as a full game.

I found a bug though. I got stuck in the wall in the pic below 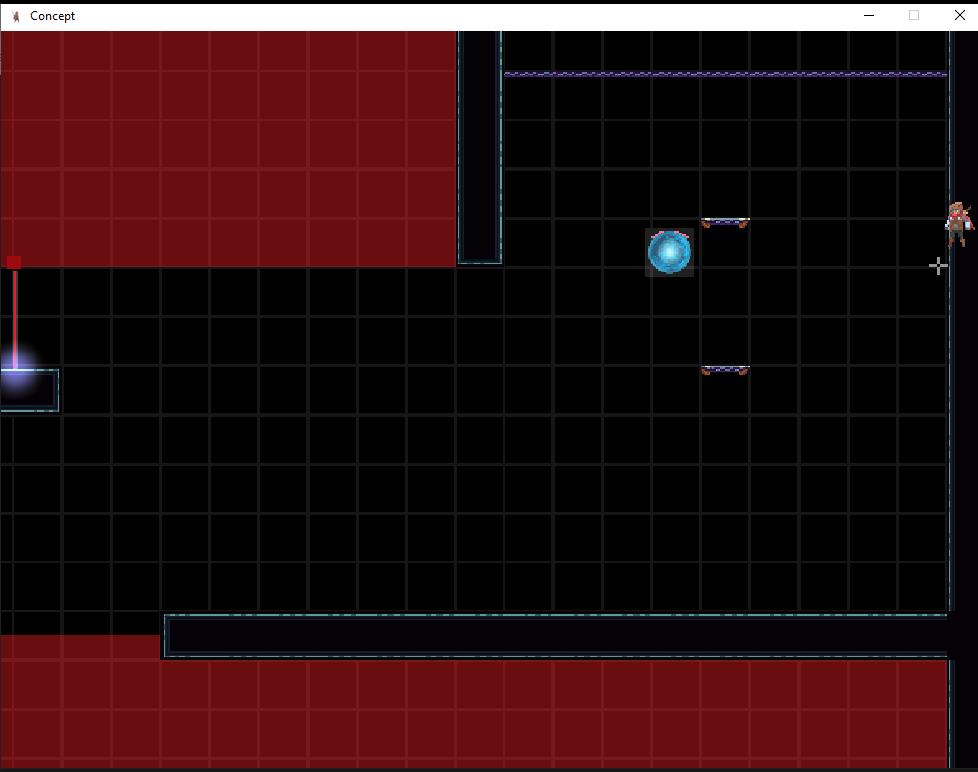 Hey it's great my opinion is just that an opinion...

This was fun... Give this game some character and Juice and it will be hit worthy. Think Super Monkey Ball.

I like this game but there is something about it that I don't like as well. The funny thing is that it's great and fun enough to play. Maybe it's the color scheme of the game it's too fast. idk Probably it's something ascetic like the ball needing to be a distinct color to see it well. Great game though.

Sure.. all you have to do is upload before the deadline and you're good.

Thank you for the feedback. There is a lot of work to do on the A.i. At this point, they cannot detect many things, like sound, etc. that would make them more fun to play against.  I'm Still working on the player character and his movements and animations, etc. I have another update coming out this week, that updates animations and may introduce new items and A.I. behaviors.

Reply
Improve My Game Jam #13 community · Posted in What game are you going to improve on?
Joel199 days ago

I have so much I can say about my project. I've been working on it since the lockdown began last March and after almost a year of work, I'm now pleased enough to show it to the world and get feedback. I released it before but took it off the market to improve on so many features. My game is a Top-down Bullet hell type shooter with tactical elements. Inspired by some of the big games in the Tactical shooter genre, I set out to create a fun bullet hell type experience that is challenging and rewarding, in some of the same ways as these Shooters. What I came up with I'm extremely proud of however I have so much work to complete. Some of the tasks are as follows.

I have added many Levels, Guns, Items, and worked on Enemy AI. However, the game is not yet to the standard I would ultimately like it to be. The Game Page is currently not published however for the duration of this jam it will be up.

I hope to get feedback on if it's fun and what players would like to see introduced, such as, mechanics, item ideas, story, etc.

Sure you can monetize after the jam. Just ensure players can play it during the jam rating period.

I think that's a good idea.  All the traditional games are going digital. If not you can still post your game and see if the community will be able to give you feed back. But you need to have a page for the game for them to provide feedback to you, if they decide to setup and play your table top game.

The only problem is how are you going to get us to play and rate your game? I want the jam to be open to a wide audience however, in your particular case, I'm unsure of the logistics. Tell us more...

The discord for the jam is https://discord.com/invite/SMvPmtD. Stop by and share your story.

just to clarify... the jam is 10days. 3days to submit and 7days to rate submissions. the deadline for submissions is Sunday at midnight.

I host this jam every two months. The next one is expected to be 25th September. Look out for it.

I agree. Couldn't have said it better myself.

This is a lot of fun. I enjoyed it thoroughly. The 1 bit art style is really suits the game. There is nothing i can say except maybe the music didn't suit the art style, but it did suit the game. Anyway this game is great fun. Power ups and a variety of levels and dragons may be a good addition in the future. Well done.

Great game! I have no issues with it. It's fun, easy to learn and understand. Well done

The tutorial is a bit difficult and frustrating. I imagine that will put alot of people off.

If you can make the UI a bit more readable and user friendly and make the on boarding process easier and fun to do, this game can maybe attract a great audience. The tutorial you have in place now will make a good challenge mode for advance players to complete. Add some super easy content for casual players to complete and you have a great mobile game here. I'm keeping this on my phone for a bit to play more in my spare time.

I'd like to know how you implemented the multiplayer. Are you on Discord? Maybe we could chat about it sometime.

My main issue is that i didn't understand what was going on half the time. The tutorial needs to be a bit more clear. Even after reading it, i was still confused what to do. Try to have small sentences in your dialog boxes as players tend to be overwhelmed by too much text to read unless that's your intention. Great Graphics.

Very well done for a first game jam game. This is a great attempt at a platformer. That being said, trying to give you some feedback there isn't much i can say. However here are some thoughts. The music maybe needs some work. Although It fits the game it not that great to listen to. I had no problems with the controls or jump mechanics, however the controls could have been tighter. Well done though. I enjoyed it.

Thanks...for the feedback and words of encouragement. I like the style too. It's the first time i did a game with a narrative focus. I ran out of time so the story beats are not very well play tested and easily missed. Thanks for playing.