Doing great! The reason I'm not active is because I'm working on a VR mini-golf game with my friend. Walkabout Mini Golf. I even made foxhunts for each of the courses. I owe you a devlog about it. I'll get back to this, but right now mini golf is taking all my world creation and puzzle design energy.

Hmm. I need to look more into inviting people and running the channel... here is a link tho... with 10 uses for now https://discord.gg/MnY5C4y

There's so much out there... I wish I had time for both making the thing AND the necessary social/promotional side...

You think I should do a discord? Is that where people are talking these days? I'm happy to do what it takes to get feedback and build excitement.

Thank you, once again, for the boost!

Hmm. Maybe I'll release this first mountain world to get some player feedback. Thanks for saying, you're keeping me going!

They do look cool. Maybe I'll turn them into a puzzle down the road...

Yes! I was thinking I would try that next. Psychologically, I just always thought of Coroutines as higher-level... fancier, luxury code. But if it saves cycles, hey...

Cheers! Well in my case, I can just change the wording on the clue cards. Give more or less of a hint based on the words or pictures I use.

Of course, there are certain puzzles in the desert chapter that need solving without a clue card, and those were always the toughest to modulate. I found exactly the same... my testers would either get it immediately or get stuck for 20 minutes. It's not the end of the world if one puzzle presents more of a challenge to a certain player than the others, as long as most everyone is getting through, and its not consistently ONE part everyone gets stuck at. I just have to trust that by then they are engaged enough to keep thinking about it for 20 minutes.

One more advice: don't trust your own feelings on how hard the puzzles are. There is no substitute for playtesting.

I will follow your game! I want to play a puzzle game like mine, that's why I made it, haha.

Thanks for feedback like that! You were not alone... I'll think harder and test more how to present these puzzles on the next one..

Oh. Is it the lack of motion blur that causes sickness... or the presence of it? Anyway, I'll have it be an option for sure.

I don't understand the dickishness. Also you can choose not to pay me... and still dl the game. Enjoy. Dick.

AH hahaha... I appreciate being sandwiched by glowing man buns.

Sorry! I guess the colliders aren't as airtight as I hoped... they will be in the next one.

I've been drawing bugs in my sketchpad lately, and also playing starCraft with my step-son, Oscar. Time to turn these blocky, static tanks into skittering space bugs for my Tower Defense game.

Mars Tower Defense will be a pretty normal tower defense game with swarms of bugs, upgrades, resource collection... but with some added wrinkles like open terrain, and the ability to place your towers and path wherever you want. 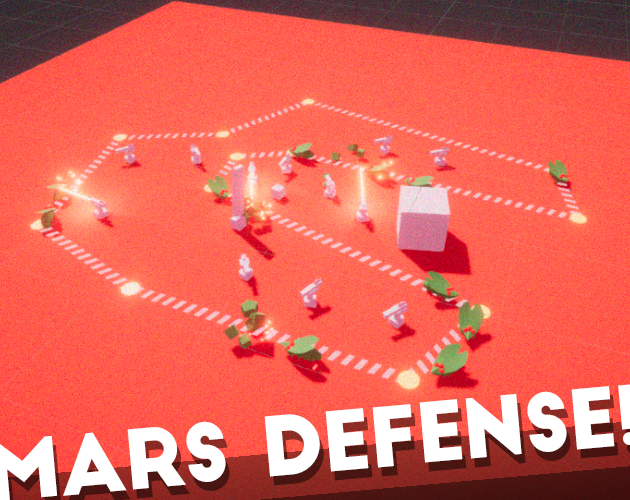 The original idea was a tower defense game from the point-of-view of the teeming mobs, so from the beginning I wondered what powers I could give to them besides "Make Mob". Resource-salvage from destroying a tower and the ability to change your path came to mind. The movement, waypoint-seeking, and collision code for the bugs (tanks at that time) came encouragingly easy.

Look at them go, they actually look like they're stopping and thinking! But the code is exceedingly simple.

I no longer know if the gimmick of "Tower Offense" is going to be worth seeing through (I can switch sides back and forth at this point), but I still want to make a Tower Defense game. Merely watching swarms of green bugs run into your blazing guns is satisfying to me even though there are no resources, strategy or gameplay yet!

Some things that bug me (not intended) about other tower defense games are the locked-down path, which I talked about, and the pre-ordained building sites. I'm going to try to keep both open as I develop. Put the path wherever you want, build a gun wherever you want. This raises certain complications, like building a gun that blocks the path, but maybe I can turn that into a gameplay mechanic, who knows?

Why the setting on Mars? Well, I like space, and I like the vermilion and hot green color combo.

Starcraft, AoE and Conmmand & Conquer for me... yes, I love RTSs and want to get more RTS elements into this Tower defense. Your points on long, boring board games are well-taken. Re video games. What do you think of Starcraft2? Did they do everything right? And why didn't RTSs exactly rise again after that...

Reply
itch.io Community » itch.io » Questions & Support · Replied to No Time To Play in Should I be Making WIPs public?
anomalina2 years ago (1 edit)

Sounds great! I like doing devlogs... that's what I mean when I say I want community feedback and keeping myself accountable. I published this new project today, Mars Tower Defense just so I could have the devlog.

What am I missing tho? Am I supposed to (and how) create a "bare" devlog without it being part of a new project? Do I keep the project private but publish the devlog inside it?

Reply
itch.io Community » Game Development » General Development · Posted in Is there a way to disable the Escape key in HTML5 games?
anomalina2 years ago

I just had this problem with my game. Xentios is right, browsers OWN that key, sorry. I switched my pause menu functionality to Backspace instead.

Of my four games, I have two games that are work in progress and I published them because I want community feedback/support, and motivation for myself to keep going. However, there's nothing to download yet.

The release status is set to In Production or Prototype, that makes sense. But I wonder if I'm using itch correctly, it seems to want a download and I don't want to turn off users who come to my page expecting a game to play.

Also, when I do finally release the game... switch it from "in production" to "released"... am I gonna get the same bang for my premiere as if I had just released a new game at once... top of most recent listings, a spike in popularity for new users just discovering it and so on? Is it worth starting a whole new project for when it is finally ready?

Yes! I will absolutely do that.

Will do, for sure, in the next one.

Guess you found the kill-screen!

oh man thanks a lot!

I recommend getting the post-processing "look" developed earlier than later. It sure helps me get through the work to look at pretty polys every day instead of flat gray or something.

You are literally the only one!

Reply
Foxhunt community · Replied to TimMaki in General Comments ~ Hellos and How are Yous!
anomalina2 years ago

Thank you so much. Working on more for ya!

Good ideas! I do want one that  makes you dash (tunnel or ghost) forward suddenly (and destroy everything in a straight line).

I was thinking instead of a laser, some fireballs or something that shoot forward and bounce off walls unpredictably.

The armor power-up does not destroy others, no.

Did you get the little tutorial pop-up about "press space to use your special power pill?" It was a last-minute addition. Pops up only if you HAVE a power pill for ten seconds without using it, only the first time.

Thank you, no. Frankum on FreeSound.org

I postponed sound and music as long as I could, but I dunno why: the game really came alive with those elements.

Can you think of a third power-up, an alteration to the laser perhaps that preserves some power-ups? As my friend Craig points out, EMP and Laser basically have the same effect, so a variation would be nice.

Thank you very much, DB. Cute and short!

Wow, thanks dude'bro! You were fun to watch while you figured it out. You struggled with that plank ramp, but damn, that last puzzle you pretty much got the fastest I've ever seen it... gratifying to see it done the way I intended it. Thank you for capping and calling it "amazing".

Seems like I need a mac running Catalina to pull some sort of post-build xcode magic and validation process. I just don't have the hardware or time for this...

Seems like I need a mac running Catalina to pull some sort of xcode post-build magic and validation process. I just don't have the hardware or time for this...

Putting the old one back up til I can get on a mac...

I rebuilt the mac download from a newer 2019 version of Unity. I hope it works! I can't really test it from my bedroom here...

Thanks for the heads up! I'll push a new build out soon.

I see from news stories that Catalina is breaking a lot of things... : /