Excellent! Games like this make me wish there was an option to do online multiplayer in Pico-8.

It also reminds me of Benjamin Soule's warehouse game (also on Pico-8), which I really enjoyed, despite the fact that it never really got fully developed or bugfixed.
https://www.lexaloffle.com/bbs/?pid=46987#p

I actually stumbled onto your game through a windy path that *might* hold an additional clue. I got Undertale and some other games I owned via Humble Bundle working on the Gameshell using box86. The Gamemaker games have been a mixed bag (I believe some I tried failed because they were Steam games and had DRM), but the ones that have worked have worked really well (mostly DRM-free Humble Bundle stuff), assuming the display and controls lend themselves to the device.

During that effort, I discovered that someone manged to get Delta Rune running on Linux. Unfortunately it was only the 64bit version. But that's what led me to your game, because it turns out the runtime you included in your game works with the Delta Rune data files. Although I came here for the runtime, I realized your game was pretty clever, and could work well with the Gameshell display/controls. But the 64bit issue means neither game will work on Gameshell.

From the Delta Rune hacking thread:
"You'll need to obtain "YoYo Games Linux Runner V1.3" somehow. This is the binary needed for actually running the game. Luckily, you can legally get it for free from GameMaker games that have a free Linux release. The catch is that the game needs to be using exactly V1.3 of the runner, otherwise the runner simply will not run Deltarune at all. Compatible runners come from GameMaker runtime versions between 2.1.4.202 to 2.2.1.287; note that IDE version is different from runtime version."

I'm not sure if that info helps, or what version of Gamemaker you have (or used) for Convergence Compulsion, but there's at least a remote chance that the earliest version(s) of Gamemaker listed here (2.1.4.202ish) might have a 32bit version? I'm not sure when they dropped support for 32bit.

In any case, there are a lot of free/demo games on itch.io, so I'm thinking I might slowly work through them and try to find any that are 32bit and run. If they do, then I'll swap the runtime with the one for your game and see if I can get it to run. I've already done this a few times with games I had working, but I geuss I was unlucky and those runtimes didn't work. If I find one, I'll leave a comment here with a pointer to the compatible game. :-)

Hi, is there any way you could release a version for Linux that is 32bit? I tried the "Linux Portable" version on this page, but it's for 64bit machines only. :-(

I'd like to try your game on the ClockworkPi Gameshell (https://www.clockworkpi.com/). The simple display and controls of your game might work really well on it. I've had success getting other Game Maker games running on it, but unfortunately it's a 32 bit Linux machine.(https://forum.clockworkpi.com/t/lets-play-x86-games/4848/32?u=adcockm)

I wasn't able to reproduce the bug when I tried the Windows version. I'm not sure if I just didn't play it enough, or if it really is just a problem with WebGL. It happened right away on the web though, so it sure seems like a WebGL thing. For what it's worth. I was using Chrome (Version 71.0.3578.98 (Official Build) (64-bit)) on Windows when I encountered that bug.

Also, on a more subjective level (in terms of gameplay) I felt the length you could pull back from the ball felt either too short, or not sensitive enough. This was true on both versions. It was nearly impossible to get up some really steep hills. I understand it might kind of be the point, but I was kind of wishing it was more sensitive and I could accidentally overshoot more often, rather than struggling so much to get it up the steep hills. Might be worth considering balancing that better.

I made one hole, and tried for the second, at the left of the image here. Then the ball got "stuck" when I overshot the hole at the left, ball rolled down to where it looks like it is resting in this pic, but I couldn't take another shot. (I haven't tried the Windows download yet so it may just be a WebGL thing.) 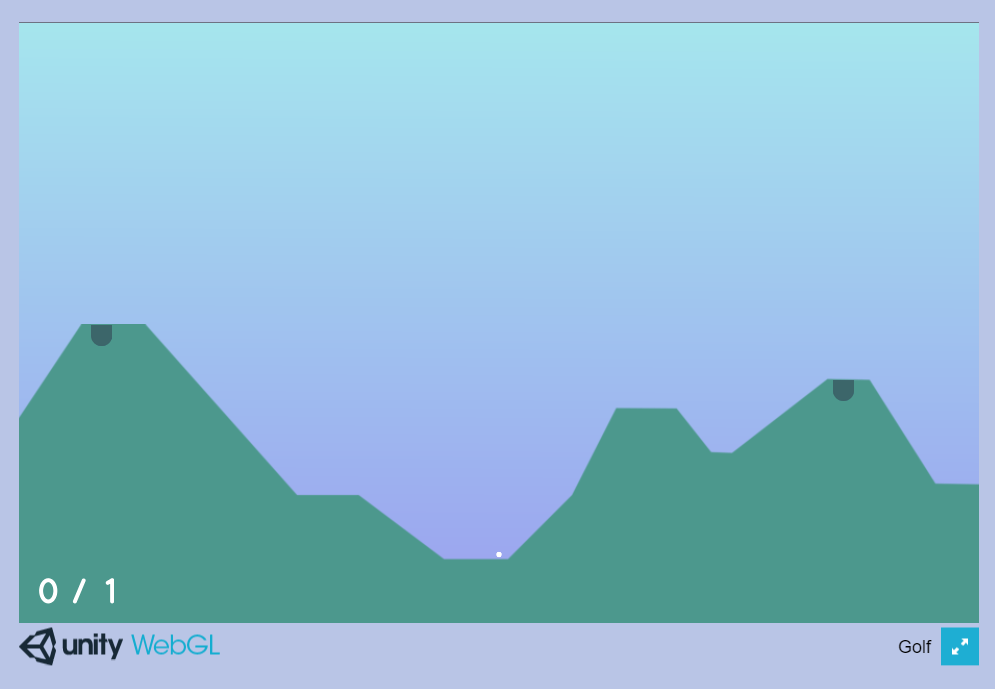 Great gameplay and idea! It's also incredibly addictive. Balancing when to take hits and when to heal and attack is interesting. Random start weapon mixes things up too, but might diminish the value of purchase options at gravity well a little, if you start with a "good" one.

Every once in a while, I stumble onto a game that fits perfectly with Pico-8, but that I wish I could play on Steam/PS4. This is one of those. Would be great to see it expanded/ported, but glad I got a chance to play it. Well done!

Great gameplay and idea! It's also incredibly addictive. Balancing when to take hits and when to heal and attack is interesting. Random start weapon mixes things up too, but might diminish the value of purchase options at gravity well a little, if you start with a "good" one.

Every once in a while, I stumble onto a game that fits perfectly with Pico-8, but that I wish I could play on Steam/PS4. This is one of those. Would be great to see it expanded/ported, but glad I got a chance to play it. Well done!

Seems like several other TIC games on itch.io have this no-loading black screen problem, while the stuff on https://tic.computer/ loads ok.

I was also glad to discover this was being made into a larger game! I stumbled onto Pico8 through the PocketCHIP, and then got horribly addicted to ToA. I'm also hoping this makes it's way to Android eventually, as it would be an excellent touch-based game. In the mean time, I'm happy to confirm that it works great on a HP Stream 7 (got one of those tablets cheap a year or so ago) running Windows 10. Looks great when run at full screen. (Specs on the device, which runs at 1280x800 : http://www.cnet.com/products/hp-stream-7-5709-tabl...)

There's one thing that would help touch controls a little -- if there was an option to set a double-tap to kill monsters instead of the default single one. With touch the only way to get info on a selected monster group right now is to "right-click", or tap and hold. Maybe it's just a personal preference, but I think it would work better if it was a single tap to select and a double to clear. With a mouse (and hover), it makes sense to keep it as is, but touch has a different feel.

Thanks so much for developing this game! I'm also a fan of Stray Shot and Underworld Siege, among others. Would love to see some of those get developed further too!