Thanks for sharing a peek at the early days of Playdate! And for a great game.

Browsing the Playdate tag doesn't show any of the new releases that have come out in the last few days—nor can they be found by name in Search:

For example, here are three games I know of (from social media) that released in the past several days—all public and accessible by link, but not by browsing or searching:

There are probably others I don't know of. The Playdate tag hasn't listed any new games since about Tuesday.

Great! Thanks. Plays, looks, and sounds very authentic, to my memory!

(If you ever want someone to test a Mac executable, let me know!)

Fun to see this game again! (How do you start the game in the browser version? I can choose controls with F keys, and cycle between No One and <create new> using W and S, but nothing I try seems to make the game start?)

Reply
itch.io Community » itch.io » Questions & Support · Posted in "On Sale" price filter shows some bundled items but not others?
Adams Immersive34 days ago

The On Sale page for the Playdate page lists 28 titles at the moment.

But when I go through ALL Playdate games, I count around 31 individual sales, not counting a bunch of others in bundles.

So I'm thinking the On Sale view simply doesn't display behind the first page.

My paid Playdate title Playtime is in a month-long 50%-off co-op bundle which started a couple days ago.

When I view the Playdate tag, and then filter by "On Sale," I see various individual Playdate titles on sale for a %, as well as some "In Bundle" titles.

But my app is not listed under On Sale. (It does come up for the Playdate tag,  and if you find it there it does show the expected blue "In Bundle" flag.)

What determines being listed under"On Sale?" Is it a human-curated thing and just takes time? Should I do something different as manager of the bundle?

(Note: out of the bundle I only expect  my one game to appear under On Sale: I understand they the other 3 titles will not show up there without some digging—because they are categorized as Tools rather than Games. It's possible they could change that categorization, since these are fun console apps for end users, not developer tools. In any case, if my title can be found and that informs people about the bundle, that helps those other devs too!)

No, but at least two developers did make timer apps here on Itch! Alarms are the main functionality I'm looking to add to Playtime (plus more weird clocks of course).

FWIW there was a version without the metadata, and then another new version (1.1) fixed that—and for me, this latest version did update just fine via web sideload.

This game is worth charging for. (You can make it free and still have the option to name a price FWIW.)

Very nice! Feels like a large marble game with a big heavy ball--not like those tiny old Playdate-sized pocket games with tiny balls. And that's a good thing: those tiny ones were never much fun. A big maze like these with some inertia is!

Thanks for the report! I'll investigate if/when I can get access to a machine with Chrome. Is there room on your display for the additional rows, but instead you see empty space? Or are the missing rows off-screen and you just need to scroll down, but you can't? (I did implement a scrolling fix shortly after launch.)

By the way, each level is identified by a square size, like "10x10," but it will re-flow the tiles into a tall rectangle instead, when needed to fit on small displays. In that case, you might see a "10x10" level having only 9 (or fewer) columns across—but you'll still get the full 100 tiles, due to there being more than 10 rows vertically.

Mobile-friendly. The goal is to touch each emoji tile exactly one time, keeping in your memory the ones already found. The grid enlarges every other level, from 2×2 up to 12×12.

New emoji are continually added to the mix, and it’s a scavenger hunt to find them! There’s no time pressure, so take as long as you like.

Your skill is likely to improve rapidly with repeated plays! 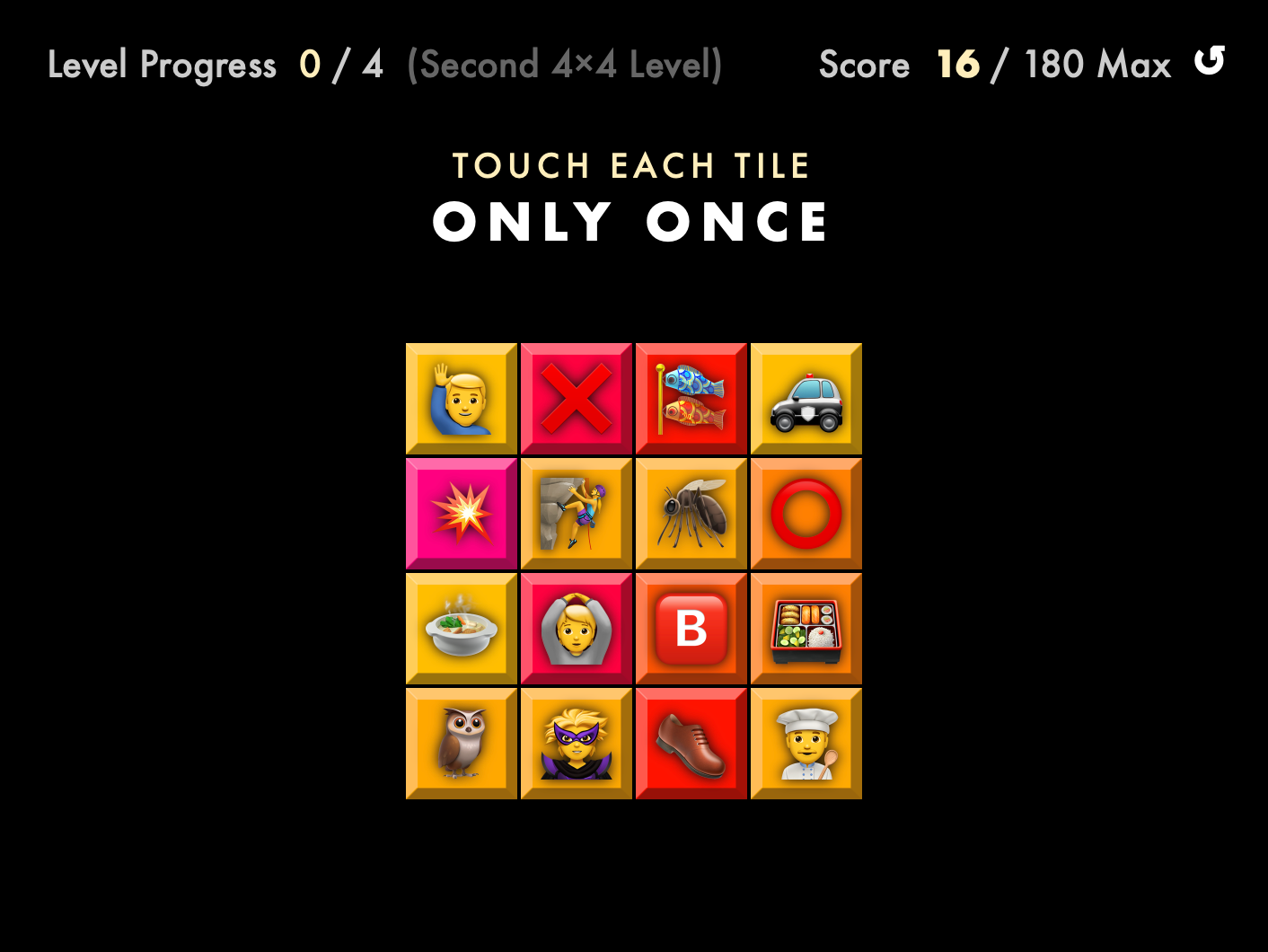 Reply
itch.io Community » itch.io » Questions & Support · Posted in Is "Most Recent" date based on when project began development, not release date?
Adams Immersive203 days ago (1 edit)

It's been a week since first launch and my new app is still incorrectly listed as being released months ago. I'll email support of course, but i2 there anything I should be doing from my end?

And for future projects: is there any "safe" way to use the "In Development" status to show progress on an upcoming app, without this happening?

New apps only appear once every day or two for the "Playdate" tag, and many people use the "Most Recent" sort to find new releases. So people have been telling me they thought my app was never released.

Awesome! Really appreciate your time getting me up to speed!

Thanks! But I already made that devlog a few hours ago, just after I set status to Released. Should I do it again now? I'm thinking I will wait a bit before doing that. (Especially since it sounds like staff are involved. Processing delay sounds reasonable.)

I see--thanks. Happily I did do that at launch, so I'm guessing the the system may need time to process?

If only those topics had come up in my searches!

Most Recent is useful for Playdate apps since the platform is still so small and new—many users just keep visiting Most Recent and checking out all the latest releases.

My project Playtime, released this morning, is indexed on the Most Recent page—but it's faaaaar down the Most Recent page, alongside weeks-old releases. I'm guessing that's because I create the page weeks ago with status "In Development." And now I have added the download and  changed the status to "Released." Is that what's happening?

If so, is there any way I can make my app's first release appear ranked properly by release date?

Or was making a page for an In Development project just a bad idea?

Thanks in advance! (This is my first itch.io launch, and I don't see this addressed elsewhere.)

Just released: something between a fidget toy and a clock. One Playdate app with over forty fun clocks of all kinds—analog, digital, and “low-state.” Some are more conventional, some resemble game screenshots, and some are more experimental, artistic, or puzzle-like.

Overrides Playdate sleep—until reaching a battery level of your choosing.

Thanks for this! I have some weird accelerometer ideas for future projects, and this might really help me figure out whether/how they are possible.

I'll be using the "Collected by itch.io, paid later" payout mode for my app releasing shortly. I'm a developer in the U.S.

I'll be creating either a PayPal or Payoneer account, and using it for nothing but getting my itch.io sales transferred into my U.S. bank account.

I don't really care about the timeframes for payouts, so my decision will be based on the fees.

Is there a summary somewhere of the fees for both options, for U.S. itch.io developers?

Scouring both company's sites (and Google, Reddit, and these forums) hasn't led me to any concrete basis for comparison.

Thanks, I think I understand now! I didn't grasp "square groups" (not even in the 2.0 demo animation) because the groups that highlight aren't 2x2, they are groups of 5 squares. If that's confusing to people, maybe they could be referred to as "2x2 groups" instead of "square groups" or something. (And/or the actual 2x2 square could be highlighted differently from the bolt when you match, so visually there is a 2x2 group to see.)

I learned to play the Melonphone when I was a teen--very similar to the France Horn, but played with the opposite hand and better suited for marching. Thanks for the attention to detail in recreating this classic instrument!

That worked! I can find it now. I haven't yet made time to give this game a try, but it's on my short list. The art looks great

For what it's worth: I just noticed you can't find this game by searching for "eyeland" on itch.io, and it's because of the spaces between the letters in the official title.

So much creativity in it already!

A fun new twist on tower defense! You yourself are the "goal" to defend from the creeps. Find side-alcoves to put towers in, leaving room to run past them and draw the monsters through their damage.

Cool! Any sense of how much of it will be aimed specifically at C users, vs. how much will be relevant for Lua-only folks?

Neat idea, thanks for sharing this! What if only the numbers/ticks rotated, and the shiny middle areas stayed the same (static sprite overlaid on top of the rotated image) like a real object receiving reflections would?

I like the sideways orientation for a big playfield! And also the lack of time pressure. Crank controls work great. Thanks for the game!

(Also, for what it's worth: maybe higher contrast might be helpful in low light? What if the darker color squares/bolts were closer to black, the lighter ones closer to white, and the lightning bolts were not square-shaped, so they stood out more?)

Cool! I have to get around to resurrecting or replacing the hard drive on my Amiga. Floppies still work, luckily.

Interesting. I have an Amiga, but I don't think I have any kind of Pac-Man for it.

The first Picross game I've ever played! Never got around to trying them before, but this one's fun! Thanks!

Very polished! Love the transition animations. It's like a less-cluttered version of the Apple Watch Solar Dial.

The scrolling playfield works great, and the variety of powerups is a fun twist!