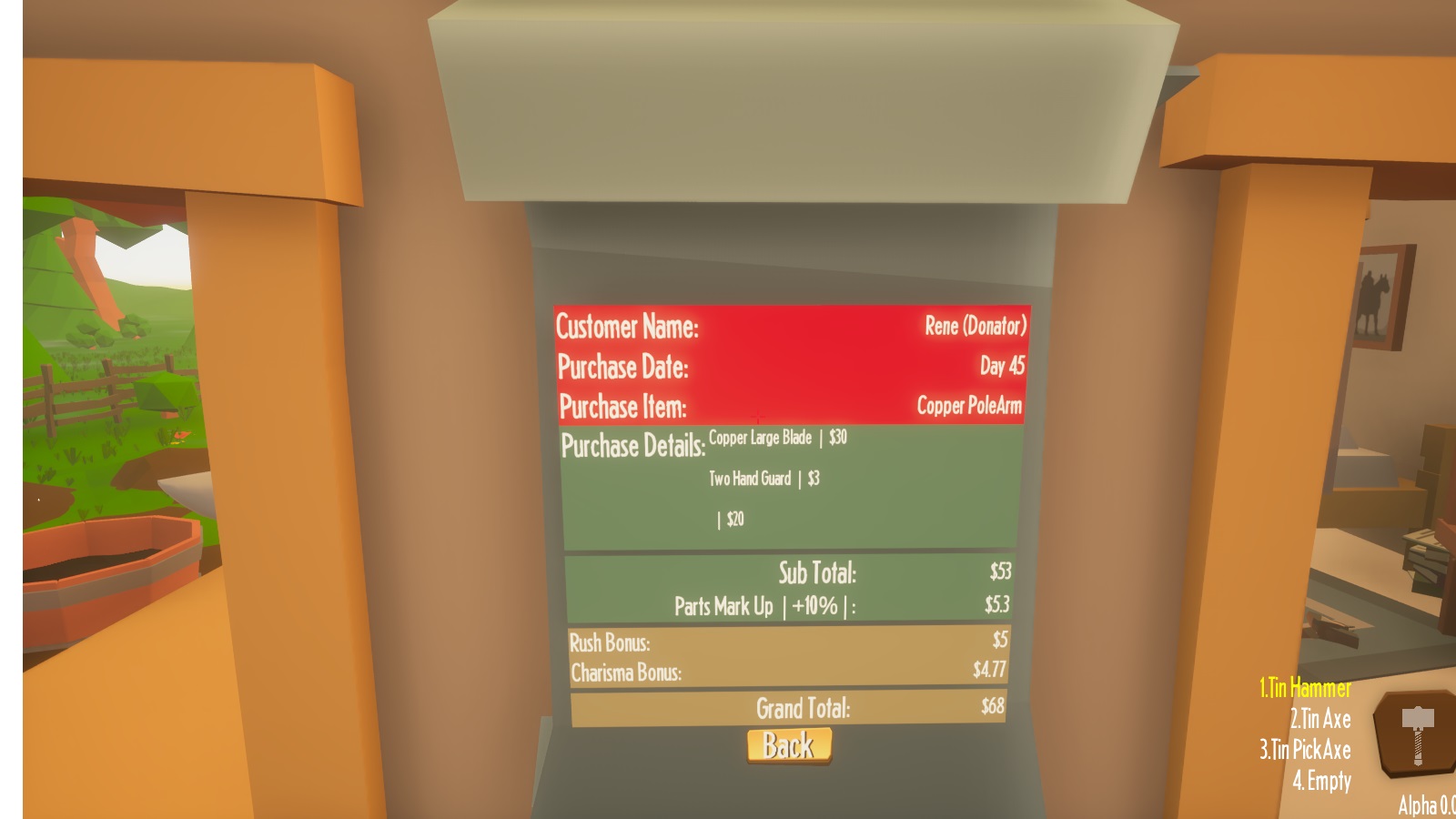 I'm going to sell them a Greatsword....

José Jalapeño: "On a STEEK"

holy crap you havebeen active - man ... I lost track of what you found out yourself, but I hope dasius is on the things that are buggy and actually, I think most of the things you said are known bugs :)

About "people requesting copper" - try making a tin one hand hammer for yourself and equip it, then people will start asking for tin :)

yess... I noticed that on the front page/game page.. some of the bugs I'd mentioned were there.. I wasn't sure if I should delete them, keep them.. or if I'd been the one who mentioned it, and Dasius simply updated the gamepage to announce it was a thing, I dunno which of which for some of them, because I only occassionally check the game page, and didn't really notice the text/bug list when I downloaded the new version and quickly started playing it

Unfortunately. I also often forget to check back on it to see if  its changed....

"people requesting copper" I had a tin 1h hammer at the time of that post, btw.

I have an iron 1h hammer right now

Yes. I eventually got them to start asking for Tin, and for Iron, but the point is, they /still/ ask for copper, It will eventually be rather out of control, and thats without adding additional metals, alloys, shields, flails, grips, and potentially armor, to the mix. - Where some of those things, have multiple tiers of crafting before you can present the product to the customer.

You're almost "punished" for having items pre-request - Because you've spent money on those, and can't buy stuff for the request, later

and Even if you could, getting everything all in order properly without fumbling can still cut it extremely close. - sure. /copper/ might not be necessary of worrying over.

But when you're at Titanium, And say 90% of your customers don't ask for titanium, and you've got no money, and with the Page on your board talking about "tax" maybe being considered or already a thing - You will be worrying over each under-tier request that you can't fulfill.

Because having "everything" taken for not meeting a deadline - would suck

and not meeting the deadline cause you spent money on getting titanium ingots ready to be ordered, and then only ever having copper and iron and say,.... mithril requests for a week in game. after that, would suck even more.

Would suck almost as much as NOT getting the titanium ready - and only getting requests that you fail to fulfill because you didn't get any of them ready in advance, and the customers keep asking for something else or of a different metal... And then after failing allllll those other requests, the 3 or4 ada and mith, the 10 copper iron copper steel in a row, etc After all that, someone finally asks for titanium.... but Guesssss what... You can't order enough ingots to fulfill it because you spent money trying to fulfill the other orders... Causing you to still not meet the deadline (and to have a messy place full odd odd here and there types and tiers.

Edit because edits don't cause post bump or notification, afaik - don't really need to spam for just this edit

I only found out about this game within like.. a week ago, tops. I honestly should've known about it months ago, Jacksepticeye actually /did/ make a let's play video on it, and I would've been over here 5months or so ago....

At anyrate. I often over-play things to death/redundancy, including contribution to help, bugs, suggestions, etc give it a few months and I'll probably never make a post again, even if I still occassionally play the game :l\

I'm only super active when I'm super into playing.

edit 2 actually just occurred to me I have like... 10 different ways youtube should be able to tell me and didn't. I have an old phone still on my wifi that I keep for updates/video use in bath/shower/restroom - and it gets its backlog cleared a lot less often than my actual phone.

mmm. Good call on the Hammer though, That does seem to be the actual trigger for tier-up requests

First request the morning after reloading and verifying the wood results, got a request (that I couldn't fill cause I used my adelite for the hammer) for an adelite greathammer.

I agree with you that the requests for "lower than your hammer" tier are bad BECAUSE they do not accept "better" material --- it really requires you to have all heads of all materials at day 15 or you will not make it and, as you said, you will lose progress traction because you have to invest way more money into things that might never be requested again.

However, being prepared yields up to 20 customers a day so ... if you keep up with it, I'd say, you still are able to advance the fastest and maybe even faster than fast people that prepare on the fly.

Yeah I found this game through jack :) and since then I love it xD 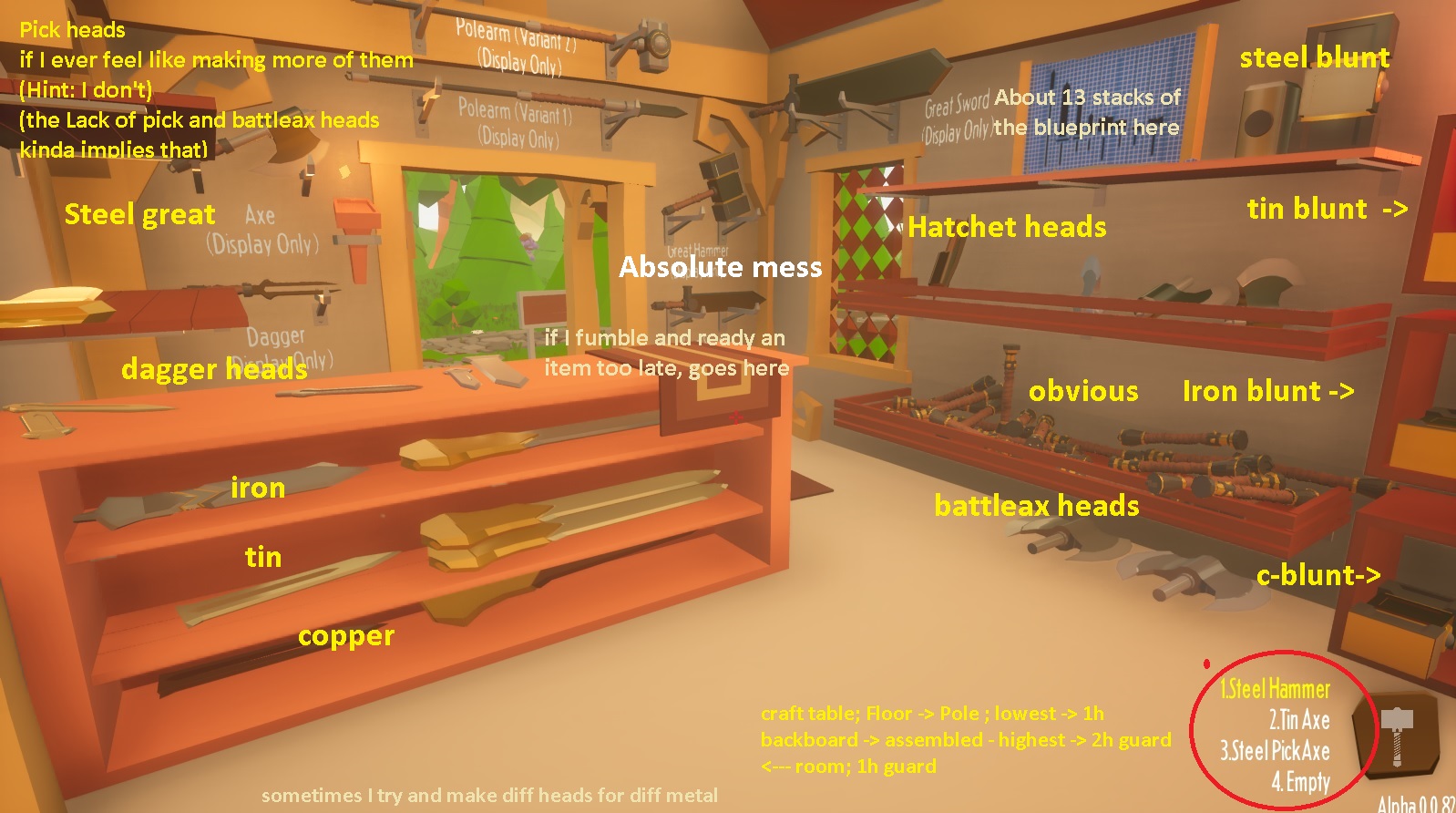 If I have to keep stock of copper after this point, I'm going to be running out of room to be any sort of prepared. and as I said with the greatsword/original bug debacle - I can't have them pre-assembled and near each other/the NPC, cause they might lock onto one and refuse while I'm left wondering which that one is, then either fumble, or destroy my place in the process to sell

My Other post contains a vision of "pre-assembled" that I had before understanding the sale bug, and I don't believe I've had it since the iron 1h sword that 'enlightened' me.

and I can't (don't want to) really use the other two shelves, not that they'd be of a lot of help in this endeavor since they're in the forging zone and through a burdening door (assembled on the backboard is 1h and 2h grips with guards ready) 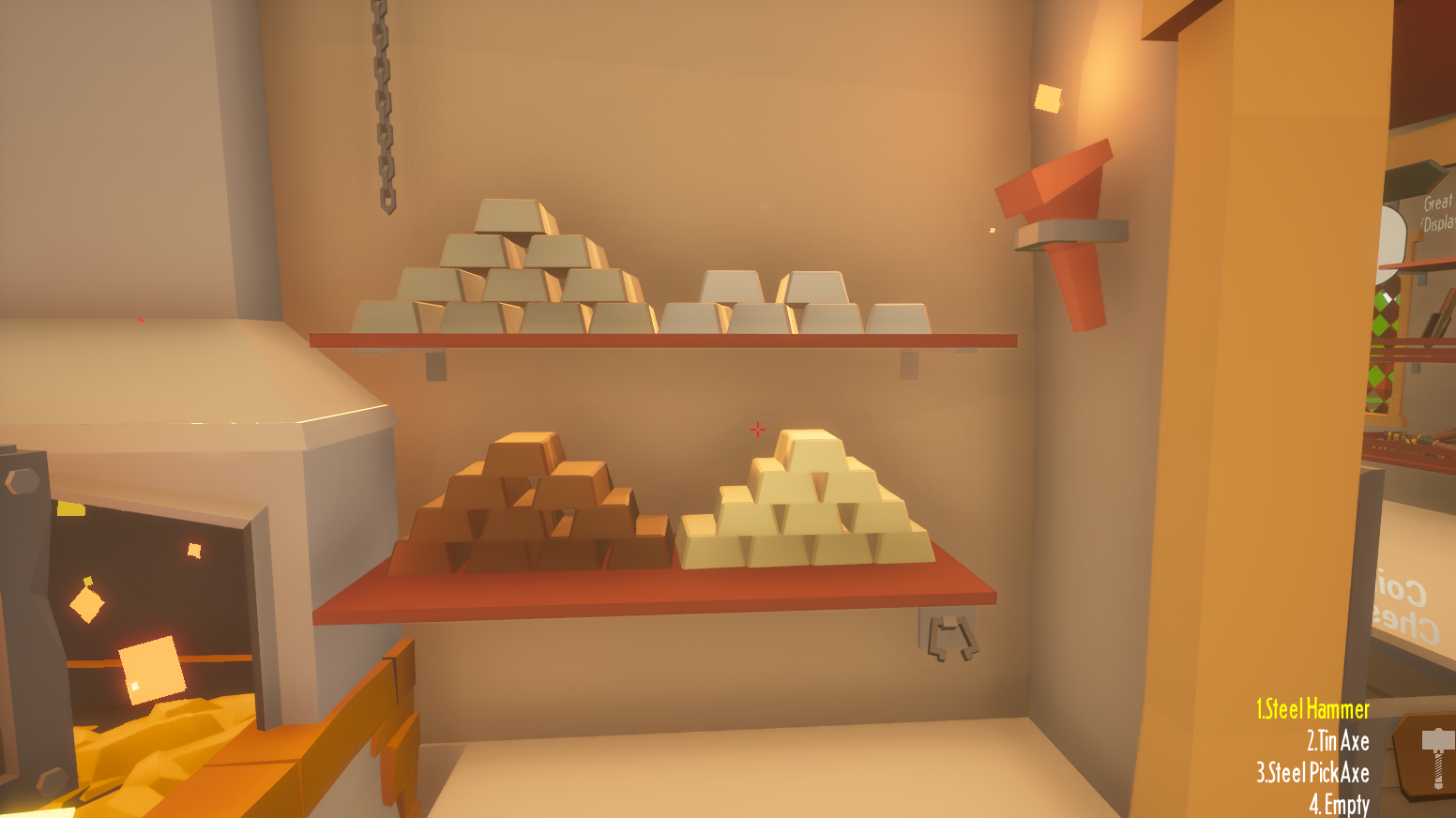 and then the shop decided to die....(edit)

Had 2 copper requests before this post was finished, so the copper shelf is already empty

Edit: I wasn't going to edit but GOD

6 copper requests in a row - practically everything copper in that picture and a pickaxe, is gone.

To be honest the fact that they still request copper and then only take copper is a game breaker for me ^^ it is stressful enough to get your stuff done, but then doing the management for all materials you have? I will wait for a fix xD

Which is where I put that "request" part in at.

Then you'd be able to go "well crap I just so happen to have this BEAUTIFUL LEGENDARY ULTRA SUPER RARE GOD SWORD..... Mithril Greatsword, that I really would like to sell, How's about you take this instead, bub?" SOLD :D (I don't really care that it isn't logical for a Novice Stone Mason to have 400million gold vs what, 4000?)

Of course if you don't have a greatsword or resources, you could still make a sale by shoving a Tin 1h sword in his hand and selling him on its super duper awesome OP game breaking Please Nerf Stats - Its like +100Quality m80, Buy it, you know you wannnaaaa.

OR.. If that seems "unfair" because of the aforementioned "novice" and "gold allowance" - You could introduce a say... 5-10% discount on "Greatsword" that doesn't match "Tin" - Which then your Charisma and Parts choice/material factor heavily into, and really, your charisma.

It'd be a fair-ish balance for being able to go "Here's a titanium greatsword sonny, go play in the woods, be back by suppa and don't poke your eye out!"

This way, They can say something like "I'm Looking for a +xx quality Iron GreatHammer - It needs at least xx damage and yy control, I don't care a lot about "protection", Can you make this for me within the next 5 hours?"

That gives you Enough time to

This kinda thing, would make Requests and Walk ins different, as well as "not absolute nightmare fuel that's driving me to want to hurl these weapons at the npcs and annoy me." and more like "Seems plausible and not as aggravating"