Your Average RPG Adventure Game.... Made In Two Weeks fo the Unexpected Jam.
Submitted by EightBlackey (@EightBlackey) — 10 hours, 40 minutes before the deadline
Add to collection 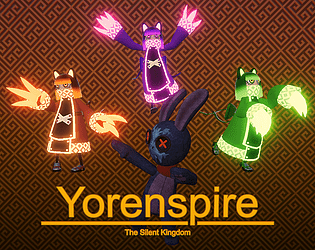 Please list any pre-made art/music/code/other assets that you used.
Aniliade Model, Textures and Part of her Rig was made before the Jam Period. The other Part of her Rig and all of her animations (Including Facial Animations) were made during the Jam period.
The Dialogue System and part of GUI were also reused and improved to fit the needs of the game.
Aside from that, everything else was made during the Jam Period.

Anything you want to say to players before they play?
This Game was originally envisioned as a way simpler and shorter kind of Testing Ground for Animation Performance but somehow it managed to get farther away during it's development for the Jam.

So Here it is .... YORENSPIRE - THE SILENT KINGDOM.

Well not here but in the link above.

PS: Sorry if the Game feels unpolished and has some bugs but 3D is hard to develop. Especially if it's done by just one Demon.

Shot out gamesSubmitted311 days ago

A little rough but a lot of fun with more potential..nice world building. Expand on this.  Cool.

Ty for the game.   It was fun and creative.

Thanks for  Commenting and Playing my Game. I really Appreciate it!!!

I LOVED this game SO MUCH. The game definitely was from the overarching lore and what happens if you don't exactly do as Aniliade told you (I really loved your attention to detail for that).

I loved the animations in the game, Aniliade felt super duper expressive and filled with personality. The writing in the dialogue was also super well-done -- Aniliade really felt super fleshed out and funny :) I picked up Yarn https://yarnspinner.dev/ for dialogue in my game and I had a great experience with it (made it really easy to iterate and drive game events from the dialogue system). It could be worth looking into, it's used by other games like Night in the Woods and A Short Hike.

I actually loved the boss fights quite a lot! The anticipation you built into each animation was really well-done; I was able to learn the boss's behaviours and adapt to its various patterns. I also love the ramp up as I went from one boss to another -- although the patterns were mostly the same, the smaller window of attack demanded that I learn how to exploit each of the boss's attacks. The fact that the boss doesn't start attacking you until you attack it first is also a nice touch.

I love how the camera kind of focuses on the boss. I think that cameras are deceptively difficult to get right (I don't feel like mine is the best either), but I definitely felt that Cinemachine helped me a lot with making a (mostly) solid camera. I can't tell if you're already using Cinemachine, but I thought it's worth the plug (because I learned it in this jam and really loved it)!

I love the art (not sure if you already have bloom), but post-processing can really help a game feel more polished. I'm sure you already know this, but a hurt animation for the player would help signal to the player "hey you're being attacked, maybe dodge or something?"

Really wished I could fight Aniliade at the end, but I totally understand given the time constraints. Regardless, this is a really solid submission! I thought the game felt incredibly polished, I didn't really notice any bugs at all :) You were really good a prioritizing the core gameplay experience and making sure that it feels super polished.

Thank you so much. I Really appreciate that you REALLY enjoyed the game and also the fact that you have been Keeping up with The Lore of My Verses.

I didn't knew that Night in the Wood and a Short Hike were using Yarn It's awesome that you pointed that out. I'll definitely gonna check it out  to maybe implement it in future games.

For the Boss Fights I expected to have three different Boss types but as you may have guessed, my worst enemy, TIME,  got in the way. So I ended up with just one Boss Type. Also I wasn't able to integrate the whole story/interactions that I secondly planned to expand way more the Lore of the Verses.

Yeah, Cameras are very difficult to get right, especially when they transition from one to another (It's not like my Cam is the best in the world either and Hopefully It won't get bugged in the future with new dialogue Scenes). The camera was indeed using Cinemachine. That allowed me to make the transitions between third person and dialogue Cams. It's Great that you managed to implement it in your entry!!!

I'm glad that you liked my Art and yes I was using Bloom to help the Glows to stand out. The player damage feedback is very poor indeed, I'll improve that in the future (In the previous version there was a damage sfx but it's volume was very low that it was almost unnoticeable but now it should be better, however that's not a cue solid enough for the player to tell if the character is receiving damage or not).

A Fight with Aniliade is planned for another Game not just because of time constraints but also Narrative...

Thanks for your Rating  and also for giving an Amazing Feedback in you Comment!!!

i really like the idea, everything is super smooth, the 3d models are amazing, but i think that you could make a jump system and more atacks for the bossfights. though this was amazing for just 2 weeks and just one person

I'm glad that you liked the Game and Models, they were made with love, tears and blood (emphasizing on Blood).

Originally I planned to have the three bosses with different attack stiles: ranged, close quarters and mixed. But due to lack of time I couldn't implement 'em. Hopefully in the future I'll do.

Originally I thought about the jump mechanic but wasn't unsure about it. But I guess it could fit the Gameplay. After all the main character is a bunny, so why not. Maybe in the future I'll Implement it.

The boss fights are very challenging , I love how well the controls and camera work, the character design is so cute and interesting xD, no idea how you could do something this good in such a short time, congrats, keep the good work.

Thank you so much!!! I'm glad that you liked the game and the characters. Sometimes I tought that I wasn't going to finish it but the sleepless nights and extra hard effort paid. I suppose. Thanks again. Cheers  =\ ^((8))^ /=

For something made in two weeks and by one person you’ve outdone yourself. A couple of objects were maybe missing colliders but it was a very pretty game

It was a hell of a ride getting there but thankfully I managed to finish it on time. Not the whole 100% of the second Idea I had, but like 60 - 70% of it. Il'l try to fix the objects with missing colliders in the future. Thanks for being the first one to rate.  d_^((8))^_b