Across the countryView game page

Robin and his family visits the country for vacation.
Submitted by HienFan — 5 days, 18 hours before the deadline
Add to collection 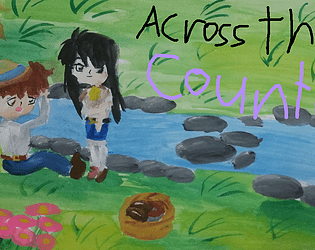 Across the country's itch.io page

I downloaded this because of the title image, it's a nice idea to use traditional water paintings as graphics for a Visual Novel, I liked that. The art was very charming in that style. The story is cute, as well!

If you want some criticism, as someone else already mentioned, I would have liked it to have music. Aside from that, more proofreading would have been good, there are many typos and some repeating words (one of the early food descriptions has "crisp" in it three times in a row, for example).

Submitted
Where the Roots grow
LikeReply
Ebriosus BeatiSubmitted3 years ago

It's still not working. I get an error handler when I run the .exe file. Was it compiled properly?

I'm the person who made the game, seems like I put the wrong file the first time.

I don't think you exported correctly, there's no .exe!