Kokoro's masks had gone out of control. What could be behind this?
Submitted by Phoskryfes — 8 minutes, 18 seconds before the deadline
Add to collection 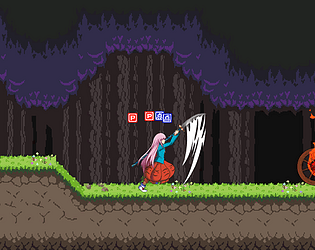 You got an in-game tutorial? Shiiiiiiiiiiiiet another +10

Sound was alright and it helped, but it does leave you wanting, music certainly checks out

This game would be pretty solid with some additional polish!

I liked it! The pixel art is detailed and impressive, and the combat was a simple satisfying slash em up game. In the nitpick corner I feel like there wasn't enough enemy hit feedback (i know they flash red but a lot of them were already red and it seemed to be multiplicative, maybe an additive white flash on top of it would help a lot). The enemies were nicely designed but the boss stage felt like it was a little mismatched to your movement speed. The hearts would always go too fast for me to really attempt to dodge unless you were just far away enough not to get hit. Still, it was a fun time and nicely scoped to include cutscenes and a boss, making it short and sweet to stick through the whole thing.

Oh yeah, I kept wanting to collect the drops that fell from enemies but was disappointed they were just decorative haha.

Yeah, the drops were just for the lolz XD

Your game and ours is so similar in concept it's scary. We even considered naming our game Lost Emotion. Overall it is a nice game, could be longer but still nice nonetheless.

bowtie at the end wasnt shaded, could use anticipation frames, overall good