Help Barry to escape so that everyone can get home in time for tea!
Submitted by Dee Cooke (@dee_cooke) — 11 hours, 24 minutes before the deadline
Add to collection 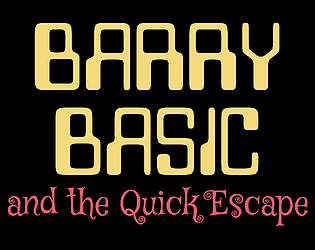 This is such a fun game! The story really reminded me of being a kid again, getting into adventures with friends. I liked how each character was different and had their own personality and strengths or weaknesses. I think it was great it was so British too, and it was kind of you to offer the Dictionary.

The game is well executed. I never had trouble figuring out what verb to use for what I wanted to do, and if I was ever stuck you provided hints and the detailed downloadable guide. You made a lot of art, and even had the characters moving around with the story. It was clear which player you were by having them facing forward. The music was simple, but effective and fitting, and you had a few different tracks to fit the settings / situations. Having a system of switching characters was a creative idea I hadn't encountered before, and I found it enjoyable.

One suggestion: in the main/start area I wasn't sure which direction led where. Because of this I ended up ending the game earlier than I intended and had to replay to get back to that point (annoying). I would add a warning, "Are you sure you're done here and want to go home for tea (end the game)?" There also might be more suggestions to save at different points (perhaps at the start in the opening tutorial text). SAVEF/LOADF is ideal in a game like this, so you can save at different stages to try out all the different things (to easily get all those achievements at the end!). All that said, it's a fairly short game so not a big deal.

Thanks for your feedback and I'm glad you enjoyed it!

Loved the idea of switching characters! It gives puzzles another dimension, and it stops before going from one to the other can become an hassle. Graphic are nice and so is the music, an enjoiyable short adventure.

Found two bugs: I reach the point ***SPOLIERS*** where you can dazzle the monster, the feedback came out that I scared it away, but the game froze. Without a savegame, I went quickly through all of it again, meaning to save just before that moment. Saving didn't work (the slot remained emtpy, loading wasn't possible). So I crossed my fingers and scared the monster again, this time around it went as it should have.

Hmm, interesting!  I'll look into that.  Thanks for the feedback!

Perhaps a better answer is needed when the verb “dig” is used alone where there is mud:

DIG
There’s nothing worth digging here.
DIG MUD
You heft the …

Noted for next update, thanks!

Completed!
A short and sweet game suitable for beginners with elegant graphics and a nice musical atmosphere. I loved it.